Organic soils play a key role in global warming because they store large amount of soil carbon which might be degraded with changing soil temperatures or soil water contents. There is thus a strong need to monitor these soils and, in particular, their hydrological characteristics using, for instance, space-borne L-band brightness temperature observations. However, there are still open issues with respect to soil moisture retrieval techniques over organic soils. In view of this, organic soil blocks with their vegetation cover were collected from a heathland in the Skjern River catchment in western Denmark and then transported to a remote sensing field laboratory in Germany where their structure was reconstituted. The controlled conditions at this field laboratory made it possible to perform tower-based L-band radiometer measurements of the soils over a period of two months. Brightness temperature data were inverted using a radiative transfer (RT) model for estimating the time variations in the soil dielectric permittivity and the vegetation optical depth. In addition, the effective vegetation scattering albedo parameter of the RT model was retrieved based on a two-step inversion approach. The remote estimations of the dielectric permittivity were compared to in situ measurements. The results indicated that the radiometer-derived dielectric permittivities were significantly correlated with the in situ measurements, but their values were systematically lower compared to the in situ ones. This could be explained by the difference between the operating frequency of the L-band radiometer (1.4 GHz) and that of the in situ sensors (70 MHz). The effective vegetation scattering albedo parameter was found to be polarization dependent. While the scattering effect within the vegetation could be neglected at horizontal polarization, it was found to be important at vertical polarization. The vegetation optical depth estimated values over time oscillated between 0.10 and 0.19 with a mean value of 0.13. This study provides further insights into the characterization of the L-band brightness temperature signatures of organic soil surface layers and, in particular, into the parametrization of the RT model for these specific soils. Therefore, the results of this study are expected to improve the performance of space-borne remote sensing soil moisture products over areas dominated by organic soils. View Full-Text
Keywords: L-band radiometry; microwave remote sensing; organic soil; soil dielectric permittivity; soil moisture; inverse modelling; tower-based experiment L-band radiometry; microwave remote sensing; organic soil; soil dielectric permittivity; soil moisture; inverse modelling; tower-based experiment
►▼ Show Figures 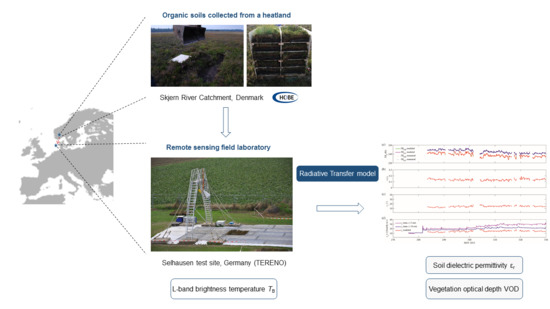