Empirical Assessment Tool for Bathymetry, Flow Velocity and Salinity in Estuaries Based on Tidal Amplitude and Remotely-Sensed Imagery

Korea’s first geostationary satellite, the “Communication, Ocean, and Meteorological Satellite” (COMS), has been operating since 2010. The Meteorological Imager (MI), an sensor on-board the COMS, has observed sea-surface radiances for the estimation of sea surface temperature (SST) in the western Pacific Ocean and eastern Indian Ocean. To derive the SST coefficients of COMS, quality-controlled surface drifting buoy data were collected for the period of April 2011 to March 2015. A collocation procedure between COMS/MI data and the surface drifter data produced a matchup database for 4 years from 2011 to 2015. The coefficients for the COMS/MI SST were derived by applying appropriate algorithms, i.e., the Multi-channel SST (MCSST) and Non-linear SST (NLSST) algorithms, for daytime and nighttime data using a regression method. Validation results suggest the possibility of the continuous use of the coefficients as representative SST coefficients of COMS. The estimated SSTs near the edge of a full disk with high satellite zenith angles over 60° revealed relatively large errors compared to drifter temperatures. Most of NLSST formulations exhibited overestimation of SSTs at low SSTs (<10 °C). This study suggests an approach by which SST can be measured accurately in order to contribute to tracking climate change. View Full-Text
Keywords: sea surface temperature (SST); COMS/MI; MCSST; NLSST; SST coefficients sea surface temperature (SST); COMS/MI; MCSST; NLSST; SST coefficients
►▼ Show Figures 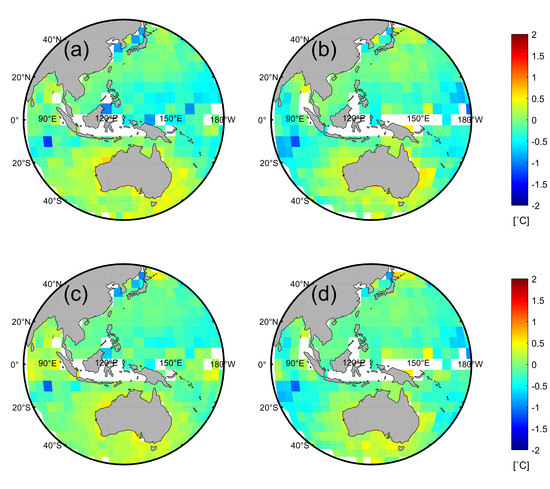