This paper discusses results of a study that was conducted to update and validate Land Use Land Cover (LULC) maps for the Lower Mekong Basin (LMB) as part of a larger, collaborative project between National Aeronautics and Space Administration (NASA), United States Geological Survey (USGS), Texas A&M University, University of South Carolina, and the Mekong River Commission (MRC). The project was supported by the NASA Earth Sciences Disasters Program (https://disasters.nasa.gov/) and aimed to provide updated and improved hydrological monitoring and modeling tools for the Lower Mekong River Basin. This effort used NASA remote sensing systems and data to help improve Mekong River Commission (MRC) Soil Water Assessment Tool (SWAT) models for sub-basins (SBs) 1–8. The project included computation and updates of LULC maps that were in turn used as a primary input to MRC SWAT hydrologic models developed for multiple sub-basins of the LMB. Updated LULC were required to optimize MRC SWAT Hydrologic models that are used in turn to aid water management and basin planning via better land surface representation and soil moisture characterization inputs to SWAT and improved hydrologic modeling outputs (e.g., in terms of surface runoff streamflow). The LULC component of the project is discussed in this paper in terms of introductory background information, methods, results, and conclusions.

The Mekong River region contains the longest river in Southeast Asia [1]. It is currently home to more than 70 million people inhabiting six countries [2]. The river is heavily used for enabling transportation, supplying water to urban areas, irrigating agricultural crops, managing fisheries, conserving wildlife, generating electric power, and enabling ecotourism [3]. The region is being increasingly utilized for hydroelectric power generation, which has led to a growing network of dams that threaten certain land uses such as agriculture and fishing. Several dams have been built in the mid to upper reaches of the river and more are being constructed or planned. The region also is highly vulnerable to climate change related disasters, such as seasonal flooding and droughts [4]. The LMB (Figure 1) includes over 60 million people with mostly agricultural areas in the lower elevations and forests in the higher elevations [3]. Agricultural crop security is an issue in the LMB due to increased hydropower development (including damming) in the upper reaches of the primary river and its main tributaries [4,5]. Climate change is another factor impacting crop security in the LMB [3,6].

Prior to the project described herein, the LULC map used in the MRC SWAT model was based on data from 1997 [7]. Consequently, there was a need to update the LULC maps used in MRC SWAT models. In response, we conducted a project that included the goal of updating the LULC maps to 2010 so that LMB SWAT models for SBs 1–8 could be improved. The 2010 date was selected given the project was initiated in 2012 and MRC’s interest in updating LULC to 2010. The LULC mapping task for the project included multiple objectives. (1) Compute updated LULC maps of LMB SB’s 1–8 using circa 2010 MODIS and Landsat data. (2) Validate representative LULC areas. (3) Assess the utility of the LULC maps and the methods for producing such maps. (4) Contribute the final LULC maps to the MRC for updating SB-specific SWAT models. This paper presents and discusses LULC mapping and map validation methods and results for SB 7 of the LMB as an example LMB SB that contains a mixture of forest, agriculture (including crop rotation information), water, and barren LULC types common to the LMB at large.

The study area is in the sub-basin (SB) 7 of the Lower Mekong Basin (LMB) (Figure 1). The LMB includes areas in Cambodia, Laos, Myanmar, Thailand, and Vietnam. SB 7 is one out of 8 SBs that the MRC uses with the SWAT model to aid water and disaster management in the region [1]. The study area includes in the central portion of the Khorat Plateau of Thailand and varies in elevation from 90 to 1326 m, based on NASA SRTM 30-m Digital Elevation Model (DEM) data [23]. As the main waterway in the SB, the Chu River runs into the Mun River which then flows into the Mekong River (Figure 2).
The study area contains several LULC classes (Figure 3) including multiple natural forest and agricultural types of interest to MRC SWAT modelers and relevant to water resource management. For the most part, the study area is an agriculturally dominated landscape in which single season rainfed rice and other mixed annual crops are grown. Along more prominent waterways, irrigated double-cropped rice can commonly occur. Shifting cultivation “slash and burn” agriculture is rare, compared to more forest dominated SBs in the LMB, such as in Lao PDR. Within the study area, some industrial forest plantations (e.g., rubber) occur amongst the main agricultural areas. Deciduous and evergreen broadleaved forests occupy portions in the study area and are primarily limited to higher elevation areas that are mainly managed as national parks. Bamboo scrub/forest occurs in some forest dominated areas. Wetlands with nonagricultural vegetation in the study area are comparatively rare, due to most wetland sites being converted to and managed for rice agriculture. A detailed description of forest LULC types of the study area is provided by [24].
The study area includes a dry season that typically occurs from October through April. A wet (i.e., monsoon) season takes place from May to October [24]. LMB cloud frequency is typically much higher during the wet season [10].

The basic work flow used in generating the LULC map for SB 7 is shown in Figure 4. To initiate the mapping process, MODIS Collection 5 MOD09 and MYD09 8-day composited reflectance data at a qkm spatial resolution [25,26] were acquired for 2003 to 2011 from the LP DAAC, including data for tiles h27v06, h27v07, h28v07, and h28v08. Corresponding MODIS MOD35 and MYD35 cloud masking products [27] were also acquired to assess and clean MODIS reflectance data for known data quality issues.
Level 1 Landsat Thematic Mapper data collected during the dry seasons (February) of 2009 to 2011 was downloaded from the USGS GloVis web site [28], including data sets from 6 scenes with paths 127 (rows 48 and 49), 128 (rows 48 and 49), and 129 (rows 48 and 49). In addition, SRTM DEM data was acquired for the study area at 1 arc second (i.e., 30-m) resolution [23]. Additional higher spatial resolution true color satellite and aerial imagery was accessed from Google and Bing web sites via the QGIS OpenLayers plugin [29].

The final 2010 LULC map for SB 7 is shown in Figure 7. This map contains 14 LULC classes that varied in frequency from rare to scarce to common.
The results of LULC map accuracy assessment are given as error matrices in Table 3 and Table 4. The error matrix for LULC classification at full classification scheme specificity is shown in Table 3, whereas Table 4 reports the error matrix for a more simplified LULC classification in which deciduous forest classes were grouped into one singular class.
The overall agreement for the SB7 2010 LULC map at full scheme specificity was ~81% (with Kappa coefficient of 0.77) compared to available reference data (Table 3). This level of overall agreement is moderately high and acceptable in that it exceeds 80%. The overall agreement improved to ~87% (with Kappa value of 0.84) when deciduous forest classes were all grouped into one class (Table 4).
At full scheme specificity, the LULC map shows a moderately high level of overall agreement (81%) with reference data. Scarce to common agricultural classes yielded moderate to high agreement with reference data. Single and double-cropped rice classes had user and producer agreements that exceeded 85%. The mixed annual crop other than rice LULC type had a high producer agreement (86%) and a moderately high user agreement (76%).
Figure 8 displays a version of the MRC 1997 LULC map that was recoded to approximate the classification scheme used for the 2010 LULC map generated with MODIS and Landsat data (Figure 7). Figure 9 shows an enlarged view of the 2010 versus the 1997 LULC maps.

The project combined use of 2010 MODIS 32-day NDVI and Landsat data from 2009 to 2011 to produce an updated LULC map for SB 7 of the LMB. The final LULC map for this SB yielded high overall agreement with available reference data. The MODIS NDVI data was used to map regionally evident LULC types, including certain agricultural and forest types that had specific vegetation greenness phenology signatures. Such LULC classes could not be mapped using monthly composited Landsat data, given that insufficient cloud free data exist for multiple portions of a given calendar year. The MODIS data used in this study enabled regionally common agricultural LULC classes to be mapped at moderately high to high levels of agreement with reference data. The results indicated that deciduous and evergreen broadleaved forest can classified with MODIS NDVI data at a moderately high to high level of agreement with reference data. The results suggest that MODIS NDVI data in conjunction with image classification techniques was not able to consistently map multiple deciduous forest classes in terms of pure deciduous, mixed deciduous/evergreen, and mixed evergreen/deciduous forest types. However, by combining the three deciduous forest classes into one, the technique was able to map a single class of deciduous forest/scrub with a high level of agreement to reference data.
Landsat data appeared to be effective for mapping certain fine scaled LULC classes that were less detectable on the qkm MODIS NDVI data, including urban and fine scaled waterways. The Landsat data showed some potential for mapping other finer scaled LULC types (e.g., IFP areas) output at the MODIS qkm scale, though additional quantitative accuracy assessment of other SBs is needed to confirm this belief.
The project yielded a new technique for mapping tropical deciduous forest classes that included utilization of forest deciduousness indicators computed from 2010 MODIS 32-day NDVI data. The latter data was useful for viewing per pixel fluctuations in vegetation canopy greenness that occurs during the LMB dry season when forest leaf drop primarily occurs.
The project enabled updated LULC maps to be produced for all eight SBs of the LMB that are currently being analyzed with MRC SWAT hydrologic models. The LULC maps from the project are being used to help SWAT modelers improve predictions of water flow dynamics that in turn is being used for aiding water management and basin planning in the LMB. Updated LULC maps along with soils, terrain, and precipitation maps from the project are being used to generate needed SWAT modeling products [41,42,43]. The LULC maps from the project also provided more specific maps of rice paddies (single- versus double-cropped or rainfed versus irrigated) that are potentially helpful for aiding other basin planning efforts in the LMB, including flood damage monitoring and assessment applications [44,45].

The refinement of the land use land cover mapping products in this project was aided by helpful, timely comments from Ibrahim Mohammed. Much of the MODIS monthly NDVI data used in this project was generated previously through a project conducted at NASA Stennis Space Center in support of the USGS Forecast Mekong project. Opinions, findings, and conclusions or recommendations given in this work are those of the author(s) and do not necessarily reflect the views of NASA, SSAI, and or other assisting organizations. 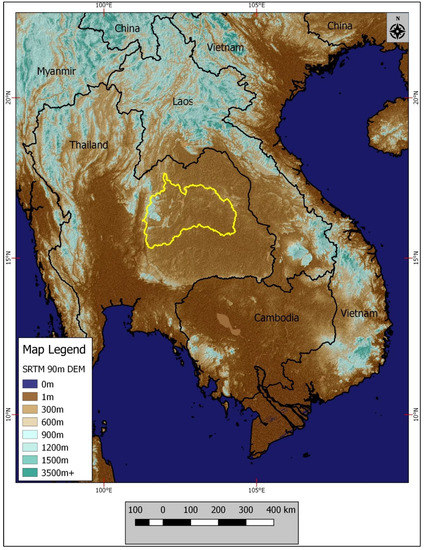 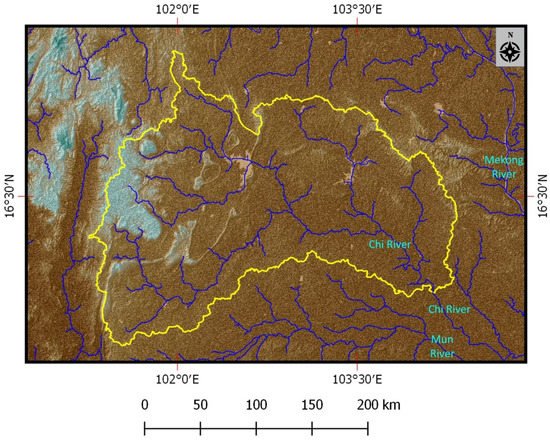 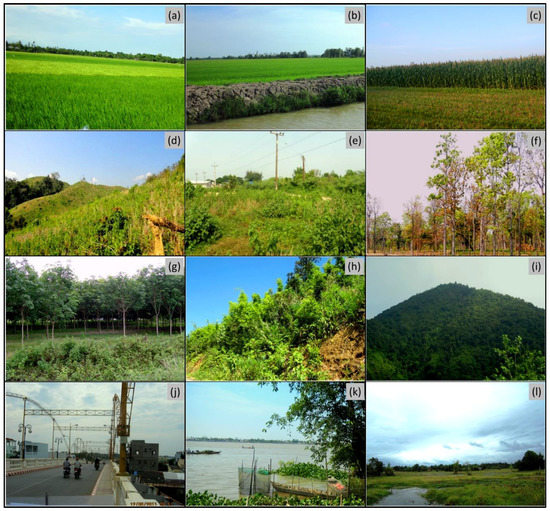 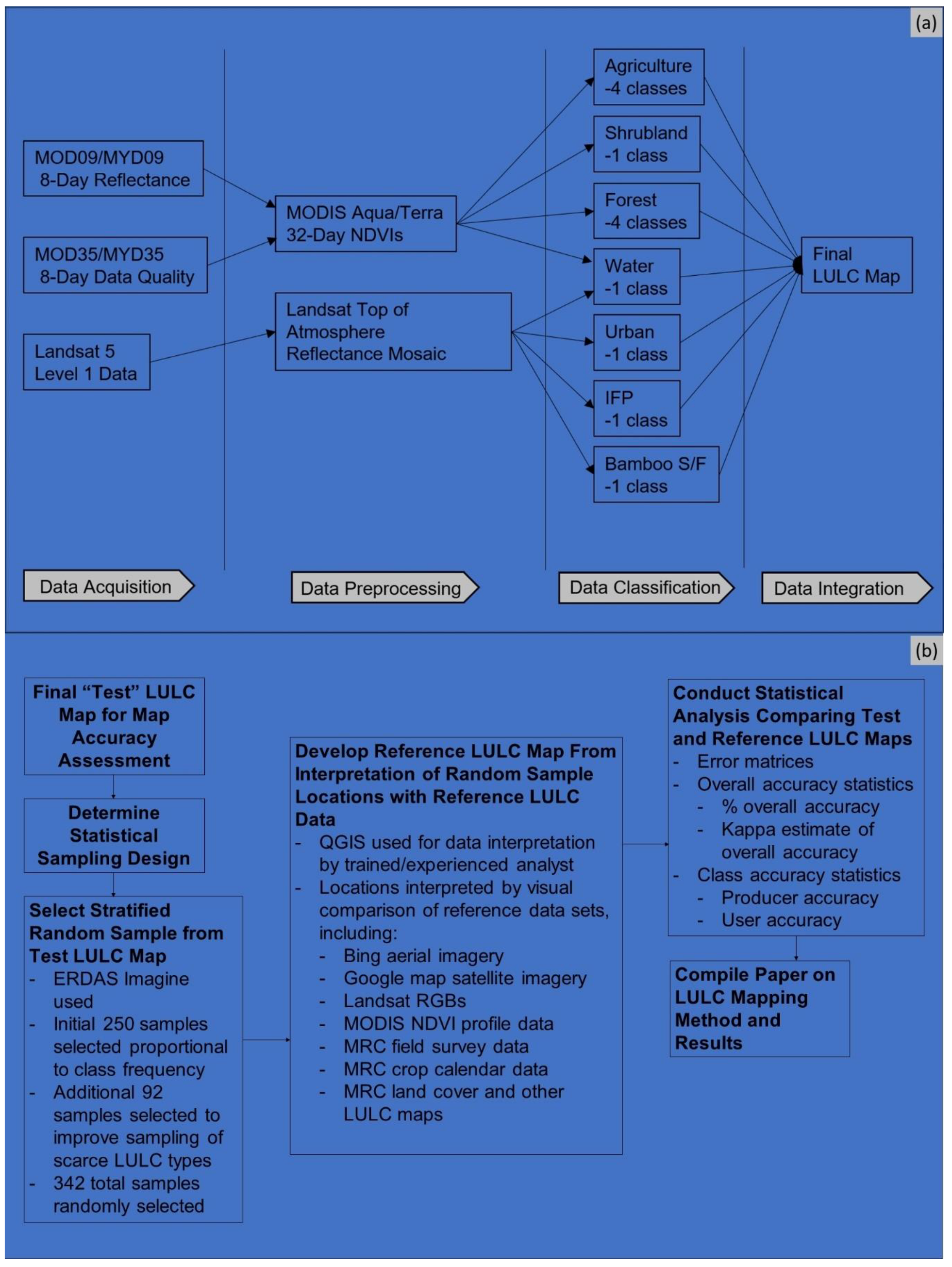 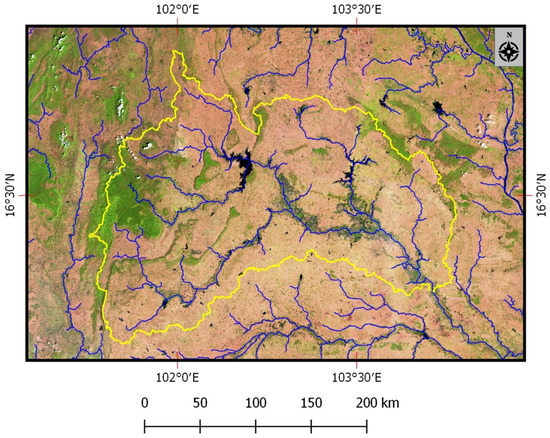 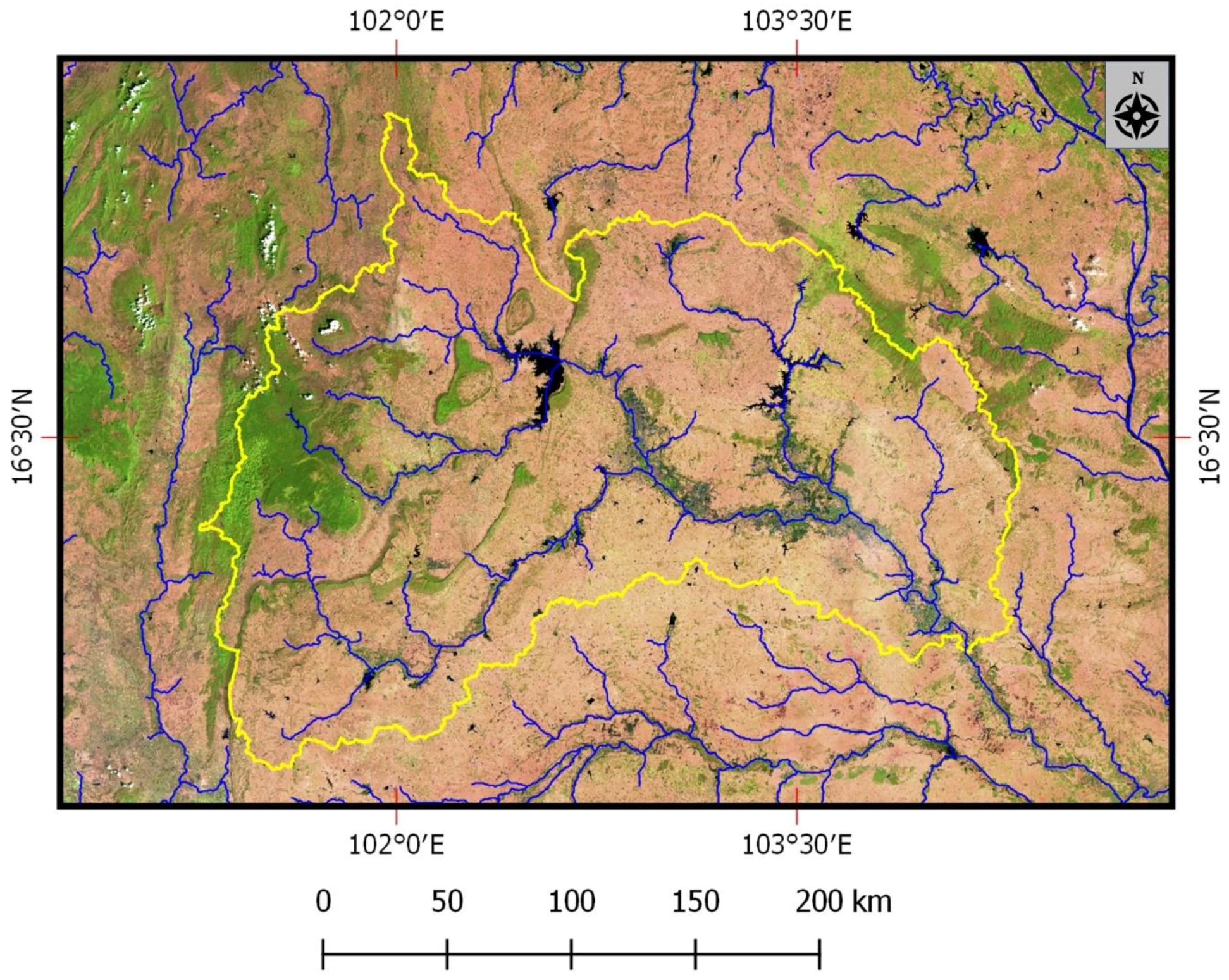 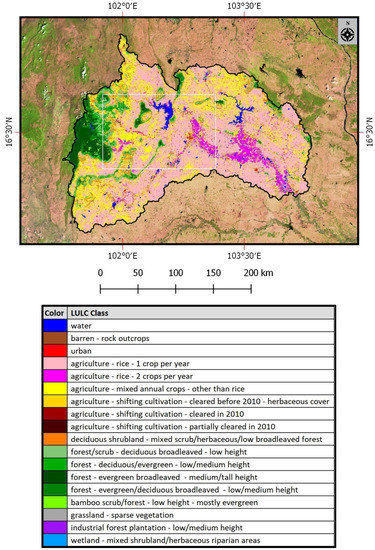 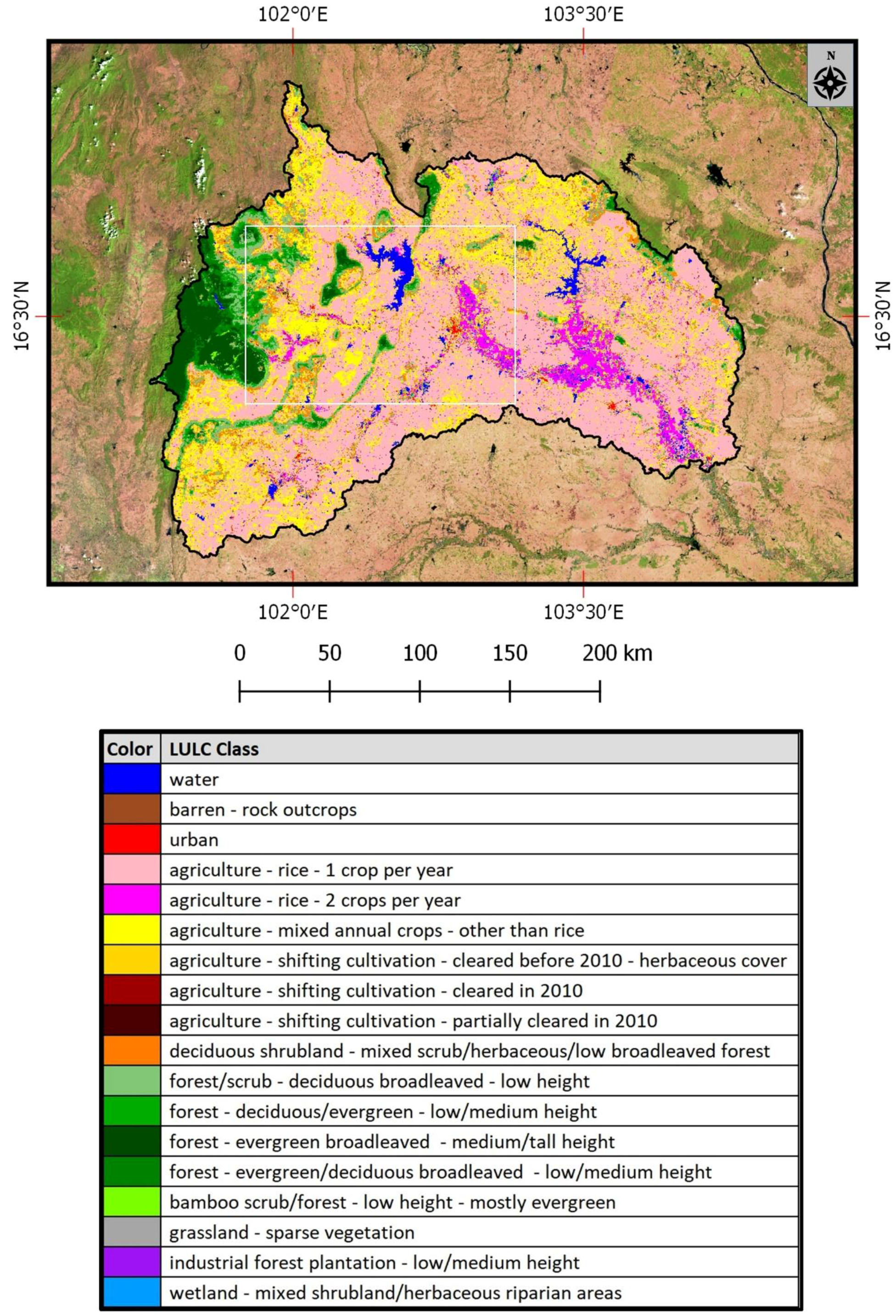 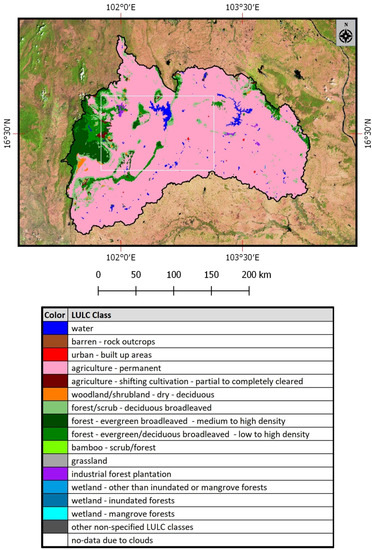 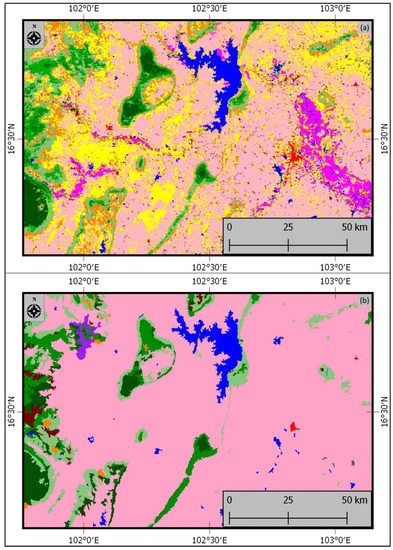