Land-terminating sectors of the Greenland ice sheet flow faster in summer after surface meltwater reaches the subglacial drainage system. Speedup occurs when the subglacial drainage system becomes saturated, leading to a reduction in the effective pressure which promotes sliding of the overlying ice. Here, we use observations acquired by the Sentinel-1a and b synthetic aperture radar to track changes in the speed of land-terminating glaciers across a 14,000 km2 sector of west-central Greenland on a weekly basis in 2016 and 2017. The fine spatial and temporal sampling of the satellite data allows us to map the speed of summer and winter across the entire sector and to resolve the weekly evolution of ice flow across the downstream portions of five glaciers. Near to the ice sheet margin (at 650 m.a.s.l.), glacier speedup begins around day 130, persisting for around 90 days, and then peaks around day 150. At four of the five glaciers included in our survey the peak speedup is similar in both years, in Russell Glacier there is marked interannual variability of 32% between 2016 and 2017. We present, for the first time, seasonal and altitudinal variation in speedup persistence. Our study demonstrates the value of Sentinel-1’s systematic and frequent acquisition plan for studying seasonal changes in ice sheet flow. View Full-Text
Keywords: Sentinel-1; ice velocity; land-terminating glacier; Synthetic Aperture Radar; Greenland Sentinel-1; ice velocity; land-terminating glacier; Synthetic Aperture Radar; Greenland
►▼ Show Figures 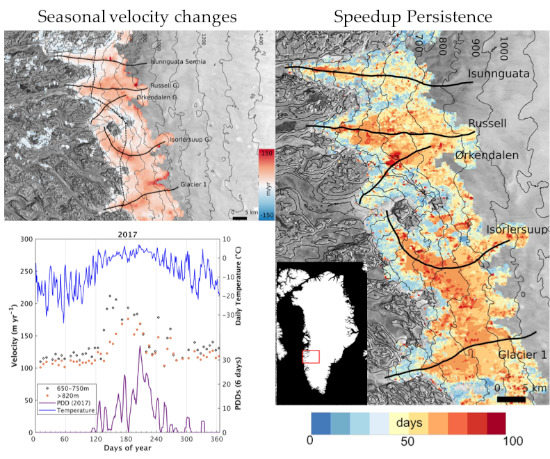