The growing need to monitor changes in the surface of the Earth requires a high-quality, accessible Digital Elevation Model (DEM) dataset, whose development has become a challenge in the field of Earth-related research. The purpose of this paper is to improve the overall accuracy of public domain DEMs by data fusion. Multi-scale decomposition is an important analytical method in data fusion. Three multi-scale decomposition methods—the wavelet transform (WT), bidimensional empirical mode decomposition (BEMD), and nonlinear adaptive multi-scale decomposition (N-AMD)—are applied to the 1-arc-second Shuttle Radar Topography Mission Global digital elevation model (SRTM-1 DEM) and the Advanced Land Observing Satellite World 3D—30 m digital surface model (AW3D30 DSM) in China. Of these, the WT and BEMD are popular image fusion methods. A new approach for DEM fusion is developed using N-AMD (which is originally invented to remove the cycle from sunspots). Subsequently, a window-based rule is proposed for the fusion of corresponding frequency components obtained by these methods. Quantitative results show that N-AMD is more suitable for multi-scale fusion of multi-source DEMs, taking the Ice Cloud and Land Elevation Satellite (ICESat) global land surface altimetry data as a reference. The fused DEMs offer significant improvements of 29.6% and 19.3% in RMSE at a mountainous site, and 27.4% and 15.5% over a low-relief region, compared to the SRTM-1 and AW3D30, respectively. Furthermore, a slope position-based linear regression method is developed to calibrate the fused DEM for different slope position classes, by investigating the distribution of the fused DEM error with topography. The results indicate that the accuracy of the DEM calibrated by this method is improved by 16% and 13.6%, compared to the fused DEM in the mountainous region and low-relief region, respectively, proving that it is a practical and simple means of further increasing the accuracy of the fused DEM. View Full-Text
Keywords: DEM fusion; multi-scale analysis; WT; BEMD; N-AMD DEM fusion; multi-scale analysis; WT; BEMD; N-AMD
►▼ Show Figures 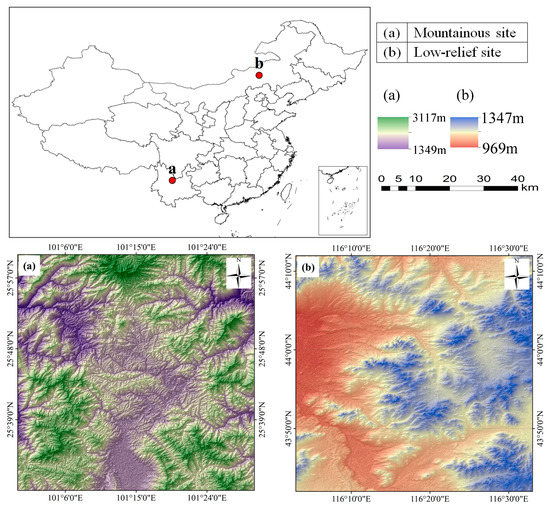