Modelling the Vertical Distribution of Phytoplankton Biomass in the Mediterranean Sea from Satellite Data: A Neural Network Approach

Knowledge of the vertical structure of the bio-chemical properties of the ocean is crucial for the estimation of primary production, phytoplankton distribution, and biological modelling. The vertical profiles of chlorophyll-a (Chla) are available via in situ measurements that are usually quite rare and not uniformly distributed in space and time. Therefore, obtaining estimates of the vertical profile of the Chla field from surface observations is a new challenge. In this study, we employed an Artificial Neural Network (ANN) to reconstruct the 3-Dimensional (3D) Chla field in the Mediterranean Sea from surface satellite estimates. This technique is able to reproduce the highly nonlinear nature of the relationship between different input variables. A large in situ dataset of temperature and Chla calibrated fluorescence profiles, covering almost all Mediterranean Sea seasonal conditions, was used for the training and test of the network. To separate sources of errors due to surface Chla and temperature satellite estimates, from errors due to the ANN itself, the method was first applied using in situ surface data and then using satellite data. In both cases, the validation against in situ observations shows comparable statistical results with respect to the training, highlighting the feasibility of applying an ANN to infer the vertical Chla field from surface in situ and satellite estimates. We also analyzed the usefulness of our approach to resolve the Chla prediction at small temporal scales (e.g., day) by comparing it with the most widely used Mediterranean climatology (MEDATLAS). The results demonstrated that, generally, our method is able to reproduce the most reliable profile of Chla from synoptical satellite observations, thus resolving finer spatial and temporal scales with respect to climatology, which can be crucial for several marine applications. We demonstrated that our 3D reconstructed Chla field could represent a valid alternative to overcome the absence or discontinuity of in situ sampling. View Full-Text
Keywords: ocean colour; SST; chlorophyll-a vertical profile; Mediterranean Sea; Artificial Neural Network; error-backpropagation ocean colour; SST; chlorophyll-a vertical profile; Mediterranean Sea; Artificial Neural Network; error-backpropagation
►▼ Show Figures 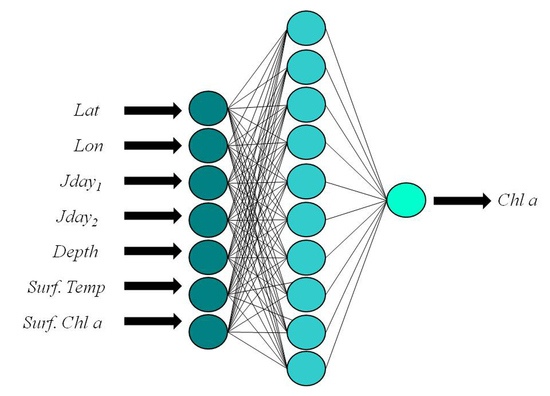