Healthcare in the Smart Home: A Study of Past, Present and Future

Smart Thermostats: An Experimental Facility to Test Their Capabilities and Savings Potential

The European Commission has explained how heating and cooling in buildings and industry account for half of the energy consumption of the EU. Several studies explain how to achieve an energy saving at home, and the use of smart thermostats will help to reduce energy consumption while increasing the efficiency of households. In this article, a comparative evaluation was carried out between four smart thermostats that are now on the market, whose characteristics vary in terms of price, precision of measurements and set temperature, algorithms, etc. A thermal test chamber was designed and constructed from a refrigerator, a thermal blanket, a Raspberry Pi and the necessary electronic components for its control and data collection. From the tests carried out in the thermal chamber, data on the operation of the four thermostats such as the maintenance and the anticipation of the setpoint temperature, were obtained. It was necessary to run the system enough times for each thermostat to memorize the housing characteristics, such as its inertia and its thermal insulation. This would also allow for the generation of a better algorithm to regulate the temperature, which would create a lower oscillation with respect to the setpoint temperature. The learning of the thermostats was not demonstrated and for the anticipation mode it was seen that the thermostats failed to improve or learn in this aspect, as they did not improve the start-up times of the heating system, with the consequent increase in energy consumption. View Full-Text
Keywords: smart thermostat; energy saving; home comfort smart thermostat; energy saving; home comfort
►▼ Show Figures 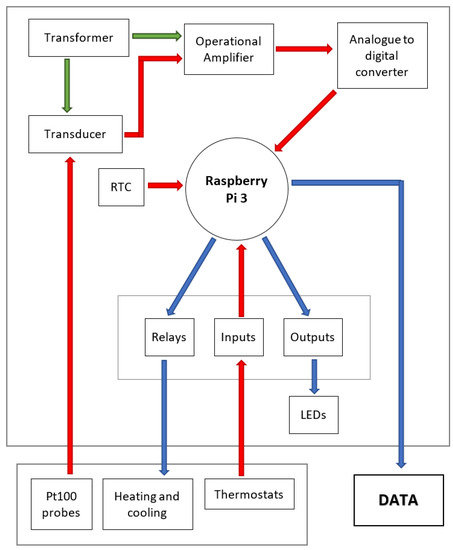