Types of Green Innovations: Ways of Implementation in a Non-Green Industry
Next Article in Special Issue

Exploring Flood Resilience Thinking in the Retail Sector under Climate Change: A Case Study of an Estuarine Region of Taipei City
Previous Article in Journal

Assessing the Role of Policies on Land-Use/Cover Change from 1965 to 2015 in the Mu Us Sandy Land, Northern China

:
Small rural coastal communities located in Atlantic Canada are vulnerable to the effects of climate and environmental changes. Major storms have impounded the coastline, causing much physical damage and affecting the socioeconomics of these communities that are composed of an aging population. The current study relays findings based on interviews completed in 2011–2012, following the 2010 winter storms in Atlantic Canada. It portrays the physical and social–ecological impacts affecting 10 coastal communities located in the provinces of Québec, New Brunswick, and Prince Edward Island. Semi-structured interviews held in these provinces are the basis for the contributions of this research. The findings reveal physical changes related to coastal erosion from high-wave impacts and storm surge causing flooding of the coastal zone. Also considered are strategies preferred and actually implemented by residents, such as building of protection walls, although undesirable. Due to funding constraints, however, many of these large-scale flood protection projects are not possible without governmental support. Instead, it is suggested that development be controlled and some respondents in this study upheld that relocation be used to alleviate the situation. Finally, more work is required to improve emergency planning. Better concerted short- and long-term responses need to be coordinated by local authorities and higher up in the government in order to ensure the sustainability of these coastal communities.
Keywords:
climate change; physical landscapes; impacts; responses; adaptation; sustainability

This study was part of a larger project called Coastal Community Challenges-Community-University Research Alliance (CCC-CURA), which aimed to develop adaptation plans and attempted to improve the resilience of these communities (see [19]). Prior to any intervention, interviews were completed in 10 communities located in QC, NB, and PEI (Figure 1). These coastal communities were selected on the basis of their interest to be part of the project; having populations of less than 10,000 inhabitants, and many less than 3000, half of them having been affected by the series of storms in December 2010 and January 2011; and not received prior interventions from governments or institutions regarding climate change adaptation. All of them mainly relied on natural resource (i.e., fisheries, forestry, and agriculture) activities as income and all these communities had aging populations.
Interviews were held singly and in couples with 74 residents of these communities in their native language (French or English). Participants were originally identified by personal and public invitations; and a snowballing sampling strategy was subsequently deployed in order to increase the sample size that was based on interviewee referral. The number of interviews was limited by the concern of saturation of interviews, as these were small communities and there was currently a diversity of projects (not only on climate change) in those communities. Prior to doing the interviews, human research ethics was sought at universities and pretests were completed in one of the communities.
Questions were based on six research themes: (1) experience with storms; (2) financial capital; (3) social capital; (4) vision for the future; (5) information sources; and (6) understanding of what is resilience. In this study, the authors targeted the themes and information that attested to the state of the physical environment and how landscapes were affected by the 2010 winter storms. The most relevant research themes addressed in this paper tended to be themes (1) and (4) because of their focus on experiences (and any perceptions that can be derived from these) as well as future vision based on their experiences, as for instance views of coastal protection. Perception can also be gleaned from any lessons that were learned based on experiences.
The demographic characteristics of the study sample were tracked for each person or couple; and the influence of gender, for example, has already been published by the authors [20]. Semi-structured interviews held in people’s homes lasted 40–75 min. They were completed by two research assistants, who kept the same order of questions, and were audio-recorded. They were then transcribed by a research assistant and verified by one of the researchers. Finally, the data were coded using NVivo v.10 software (QSR International) by one researcher and rechecked by a second one. As some of the interviews were in French, they were later translated into English.

Communities experienced different levels of storm damage following the 2010 winter storms. Those located in Rivière-au-Tonnerre and Bonaventure (QC), Shippagan and Dundas (NB), and Stratford (PEI) experienced none to very little storm damage. The damage mainly affected the communities of Ste.-Flavie and Maria (QC), Ste.-Marie-St.-Raphael and Cocagne-Grande Digue (NB), and Morell (PEI), where there were various impacts from storm surge causing flooding and erosion. It appeared that the most impacted communities were located in Ste.-Flavie and Maria (QC), where there was the greatest amount of damage, including houses on the coast being swept by the storms.
When asked about any observed changes, participants reported that the most notable observed changes had occurred in the last 5–10 years. Participants believed that there is an increasing intensity of storms in this region and a cause to become more nervous than before, particularly following the 2010 storms: “And it is the intensity of the experience that makes this a moment. The intensity and then the repetition of the experience” (R.C., Baie-des-Chaleurs, Bonaventure). Although this participant was not impacted by the 2010 storms, the sentiment remains the same as affected people because members of his family were seriously affected. These impacts were, therefore, evident not only at the local (community) level but also at the regional scale (R.C.’s family was in other communities of the region). Commonalities related to stronger (more intense) storms that were shorter in duration, but produced heavier rainfall and increased erosion. In the Acadian Peninsula, there was less sea ice reported in the winter. This change in sea ice was quite important, as it increased damage during storms in the winter, when wave action was stronger at the coast.
Table 1 provides a summary of the regional weather patterns that could be contributing to landscape patterns. It is clear (from Table 1) that most interviewees observed and experienced a greater number of storms and that this had an impact on the landscape. Erosion, for example, was a major factor. Moreover, human activities appeared to have exacerbated the situation. More runoff was evident and attributable to deforestation and agriculture, indicating that human impacts are having an effect on the physical landscape. Owners of properties on the shore in Ste.-Flavie were faced with a new reality during the December 2010 storms when some houses were destroyed by coastline erosion. The interviewees of this community were aware of the power of the ocean and its effects on the shoreline.
In Table 2, social and ecological patterns for each region of the study area are summarized. It shows that on the ecological side, as most of these communities are fishing villages, natural resources were a significant concern and the interviewees have seen changes related to fishing. The social changes varied among communities and reflected their main concerns in their region. For example, in Ste.-Flavie the damage caused by the storms of 2010–2011 led to more conflicts and social stress. In the Acadian Peninsula, however, the perspectives were ambivalent, spurred by more cottages and positive issues to greater stress in the fisheries sector with larger boats.

There are many physical changes along the coast of Atlantic Canada that have been identified with communities in the course of this research. These landscape alterations stem from extreme events, such as heavy rainfall, storm surge, and high waves that have increased under climate change, leading to coastal erosion and affecting the natural and built environments. They have also been reported in several assessments (e.g., [1,2]). It is, therefore, clear that alternative solutions are necessary to adapt to climate change and ensure the sustainability of theses coastal communities. Relocation does not suit everyone, however, and people encourage increasing awareness and education so that community members can make informed hard decisions regarding which actions to take. Some respondents called for government action to make important decisions and for concerted efforts in response to climate-evoked landscape change. The expense of hard defenses at a time when governments are strapped for funds may be unrealistic, however, and local efforts, including soft-engineered responses, are preferred. Solutions need to accommodate short- and long-term trends as well as respond to physical and social problems.

We are grateful to the Social Sciences and Humanities Research Council (SSHRC) of Canada for funding this research through the Coastal Community Challenges-Community-University Research Alliance (CCC-CURA) project under grant no. 833-2009-4010.

M.T. and L.V. wrote the article; L.V. and M.T. analyzed the data; and S.P. edited the manuscript and provided Figure 1 (modified by M.T.) and further inputs. 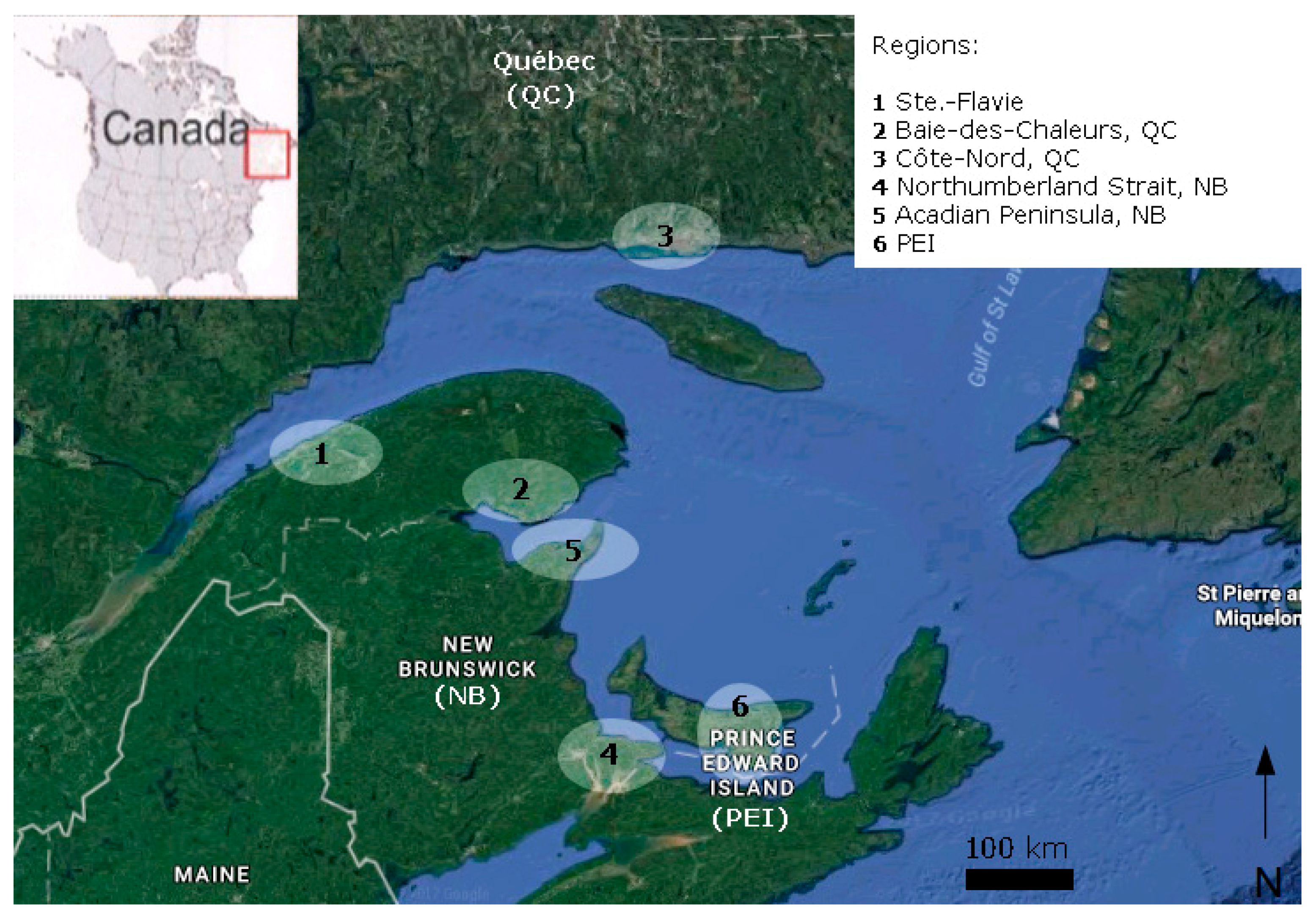