In this paper, we designed and analyzed advanced sodium-cooled fast reactor cores using uranium-free metallic fuels for maximizing burning rate of transuranics (TRU) nuclides from PWR spent fuels. It is well known that the removal of fertile nuclides such as 238U from fuels in liquid metal cooled fast reactor leads to the degradation of important safety parameters such as the Doppler coefficient, coolant void worth, and delayed neutron fraction. To resolve the degradation of the Doppler coefficient, we considered adding resonant nuclides to the uranium-free metallic fuels. The analysis results showed that the cores using uranium-free fuels loaded with tungsten instead of uranium have a significantly lower burnup reactivity swing and more negative Doppler coefficients than the core using uranium-free fuels without resonant nuclides. In addition, we considered the use of axially central B4C absorber region and moderator rods to further improve safety parameters such as sodium void worth, burnup reactivity swing, and the Doppler coefficient. The results of the analysis showed that the final design core can consume ~353 kg per cycle and satisfies self-controllability under unprotected accidents. The fuel cycle analysis showed that the PWR–SFR coupling fuel cycle option drastically reduces the amount of waste going to repository and the SFR burner can consume the amount of TRUs discharged from 3.72 PWRs generating the same electricity. View Full-Text
Keywords: sodium-cooled fast reactor (SFR); TRU burning; uranium-free fuel; PWR spent fuel; nuclear fuel cycle sodium-cooled fast reactor (SFR); TRU burning; uranium-free fuel; PWR spent fuel; nuclear fuel cycle
►▼ Show Figures 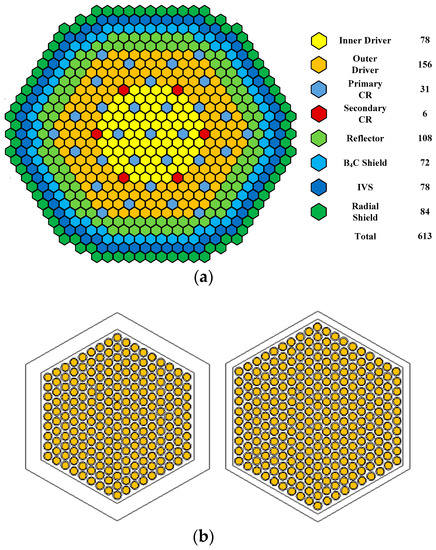