The Effect of Cross-Border E-Commerce on China’s International Trade: An Empirical Study Based on Transaction Cost Analysis
Previous Article in Journal

Decision support theory, methods, and algorithms have been discussed by many researchers in the literature [36,37,38,39,40,41,42,43]. In this study, a decision support system for risk assessment of heavy metal pollution in farmland soils (DSS–RAHMP) is proposed (Figure 1) and can be used for common risk assessment practices for heavy metal pollution in farmland soils.
As shown in Figure 1, the framework can be divided into four layers from an architectural point of view: (1) infrastructure; (2) business application; (3) presentation; and (4) user layers. The infrastructure layer is used to provide infrastructure support for the risk assessment of heavy metal pollution; this layer includes data storage and web application services, load balance, and virtualization. The business application layer is used to provide users with various application services, such as risk assessment, data query and update, statistical analysis, agricultural survey, and information virtualization. The presentation layer is responsible for formatting and displaying information from the business application layer. The user layer offers various user interfaces, such as desktop computers, laptops, and tablet personal computers (PCs), through which users can access the system.
Moreover, the DSS–RAHMP is composed of: (a) a mobile data acquisition terminal (MDAT); and (b) a web-based information system (WIS). The MDAT is an Android-based portable computerized device that runs a data acquisition system for data acquisition or query. The WIS, which is the core of the DSS–RAHMP, is used for risk assessment, data management, and data query.

A three-layered software architecture model is used to build the WIS and MDAT, which are both based on a model view controller (MVC) [44], to make the system open, flexible, scalable and reusable. Design patterns are proposed through the integration of integrated Spring MVC [45], Hibernate 4.2 [46], Struts 2.3.1 [47], SiteMesh 3 [48], and Maven 3.5.0 [49]. Figure 2 divides the three-layered software architecture model into four parts: the presentation layer (PL), business logic layer (BLL), data access layer (DAL), and model. The PL provides the user interface of the system and typically uses a controller and Java server pages (JSPs)/Views for browser-based/Android-application-based interactions, respectively; the controller is responsible for forwarding requests, and the JSPs/Views are responsible for displaying the web page to the user. The BLL separates the DAL from the PL and serves as an intermediary for data exchange between the two layers. The BLL implements the business functionality of the system, which is typically composed of services implemented using Java programming language. The DAL is responsible for exposing the data stored in the database to the BLL, thereby isolating the BLL from the details of the specific data storage solution; this isolation can minimize the effect of changes in database provider or schema. The model is an object-oriented entity or a data container that encapsulates and conceals the details of the specific data representation formats. This proposed three-layered software architecture model has high cohesion, reusability, and scalability, low coupling, and easy deployment and maintenance characteristics.

As the core of the DSS–RAHMP, the WIS is responsible for data processing and storage. All data uploaded by the MDAT can be processed by the WIS. The WIS is developed in Java programming language [50] and is based on a three-layered software architecture model that runs on Tomcat 7.0 web server and supports Java Development Kit 1.7 or later. In addition, the WebGIS technology, that is, Baidu Maps, is utilized for displaying the monitoring data dynamically and visually in the WIS.
The main functional modules of the WIS are risk assessment, data management monitoring, pollution source management, agricultural survey, statistical analysis, and system settings. In the data management monitoring module, we can create new sampling tasks, assign them to the data acquisition personnel, and audit the monitoring data uploaded by the MDATs. In the pollution source management module, we can visually add pollution sources and monitoring points to the map. Meanwhile, many data mining methods are integrated into the statistical analysis module, and various data reports from multiple dimensions can be generated. The agricultural survey module can be used for various surveys, such as those for heavy metal pollution investigation and the intention of farmers to plant crops. Finally, the risk assessment of heavy metal pollution in farmland soils is conducted in the risk assessment module, which is based on our proposed soil–crop collaborative model (Section 3).

GIS is a computing system that can store, manipulate, analyze, and display spatial and geographic data [30]. GIS technology can support rapid spatial orientation, location retrieval, and information visualization in the risk assessment process of heavy metal pollution in farmlands. WebGIS is the junction of web technology and GIS, thereby improving and extending the functionality of GIS. WebGIS is a distributed system that provides geographic information services that are based on Internet or intranet platforms and allows users to access geographic data and processing services only with web browsers. Thus, WebGIS has strong interactivity and dynamics. Compared with traditional GIS software, WebGIS has lower application threshold, wider application range, more timely data update, lower construction cost, and higher security. Many large Internet companies, such as Google, Baidu, and Tencent, recently developed online maps that are based on WebGIS technology for public use. In this study, Baidu Maps is used for visually displaying the pollution risk level and the detail of each monitoring point on the map.

QR code [51,52] is the trademark for a type of 2D barcode. RFID [52,53] uses electromagnetic fields for automatically identifying and tracking tags attached to objects. In this study, QR code and RFID technologies are used for sample identification by scanning barcodes or reading RFID tags with smartphones. An RFID or a QR code tag, shown in Figure 4a, is attached to a sample bag. The QR code tag can be scanned by a smartphone camera, and the RFID tag can be read by the built-in NFC module of a smartphone.
To ensure the authenticity and normality of the collected samples, a unified sample coding method that can generate a unique ID for each sample is designed. The ID code of each sample consists of 20 digits, which is divided into three parts, project information, regional code, and serial number, which is further subdivided into eight parts (Figure 4b). When assigning a sampling task, the system automatically generates and prints the QR code tags for the samples to be collected. When collecting the soil or crop samples, the data acquisition personnel can quickly enter the sample code, which can automatically associate with and bind monitoring points by scanning the QR code or RFID tag embedded on the sample bag using a smartphone. This type of collection method considerably improves the efficiency of data acquisition and reduces workload. Thus, this method can be considered a highly efficient solution.

Web service is the service provided by an information system to another [54] by communicating with each other via the Internet or intranet, thereby describing a standardized way of integrating web-based interfaces using extensible markup language, simple object access protocol, web services description language, and universal description, discovery, and integration open standards. In this paper, web service technology is used for data exchange between the WIS and the MDAT equipment or between the WIS and other external information systems. Thus, this decision support system has good openness and high scalability.

Xiangtan County in Hunan Province, which is well-known as the hometown of nonferrous metals, is used as the study area for verifying our proposed model. Xiangtan County is in the lower reaches of Xiang River, which covers an area of approximately 2132 km2 and is within N 27.333–28.083 and E 112.416–113.049. A total of 945 monitoring points are used, and their spatial distribution is shown in Figure 5. Most of these monitoring points are in the middle east of this county, and a small amount is in the south of this district, which has a good distribution of rice fields. The 945 monitoring points are distributed among the 285 administrative villages of 15 towns and seven townships of the county.

This study examines data on five types of heavy metals, namely, Cd, Hg, As, Pb, and Cr, which are commonly related to human health and are the main causes of heavy metal pollution in farmland soils in China according to a national survey of soil pollution on soil quality released by the Chinese government department in 2014 [20]. We select rice as the crop sample because it is the main cultivated crop in the area. A soil sample (0–20 cm) and a corresponding rice sample are collected from each of the 945 monitoring points. The latitude and longitude of each monitoring point and its soil type, land utilization, farming, irrigation, sampling scene pictures, and surrounding potential pollution sources are recorded and uploaded to the WIS synchronously by using our developed data acquisition system. All soil and rice samples are transported to the laboratory in sealed plastic bags for laboratory testing. The test results are imported into the WIS promptly after testing.

Our proposed soil–crop collaborative assessment model is integrated into the WIS in the DSS–RAHMP. The WIS can provide various services, such as risk assessment, data management, and statistical analysis (Figure 11). Users can access the WIS through different user interfaces, such as desktop computers, laptops, and tablet PCs. Until now, the developed system is applied in several county-level cities in China for risk assessment and supervision of heavy metal pollution in farmland soils, with its functions, including risk assessment, data acquisition, statistical analysis, and agricultural survey. To date, our system is running safely and stably and can provide better decision support for the risk assessment of heavy metal pollution in farmlands than when no such system is applied. For instance, our developed data acquisition system can collect and upload data from monitoring points efficiently and accurately, and this system is considerably superior to the traditional way of paper collection. When data collection is complete, our system automatically assesses the pollution risk and visually displays the evaluation results on the map. Therefore, the level of soil heavy metal pollution at each monitoring point and its sampling data can be easily queried in real time. Government managers can adopt a series of measures, such as targeted monitoring, soil remediation, and crop adjustment, in areas at high risk of soil heavy metal pollution. Thus, these measures are valuable in improving the management level of heavy metal pollution in farmland soil.

This research is supported by the Beijing Natural Science Foundation (No. 9152009), the National Natural Science Foundation of China (Nos. 71301011 and 61403035), and the National Key Research and Development Program of China (No. 2016YFD0800907). The authors would like to thank all of the researchers for their efforts in our work. We also thank the reviewers and editors for their valuable suggestions and comments to improve this work. 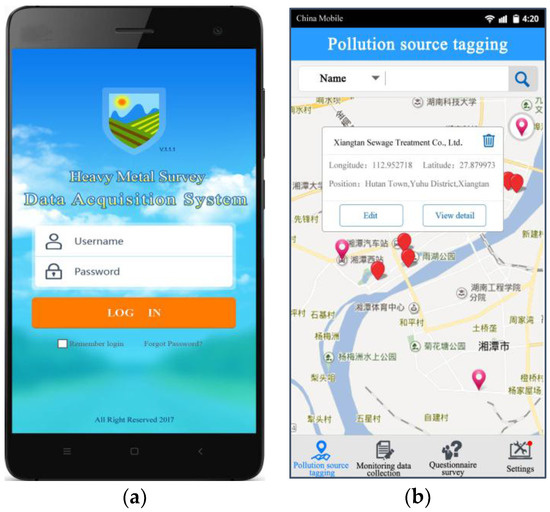 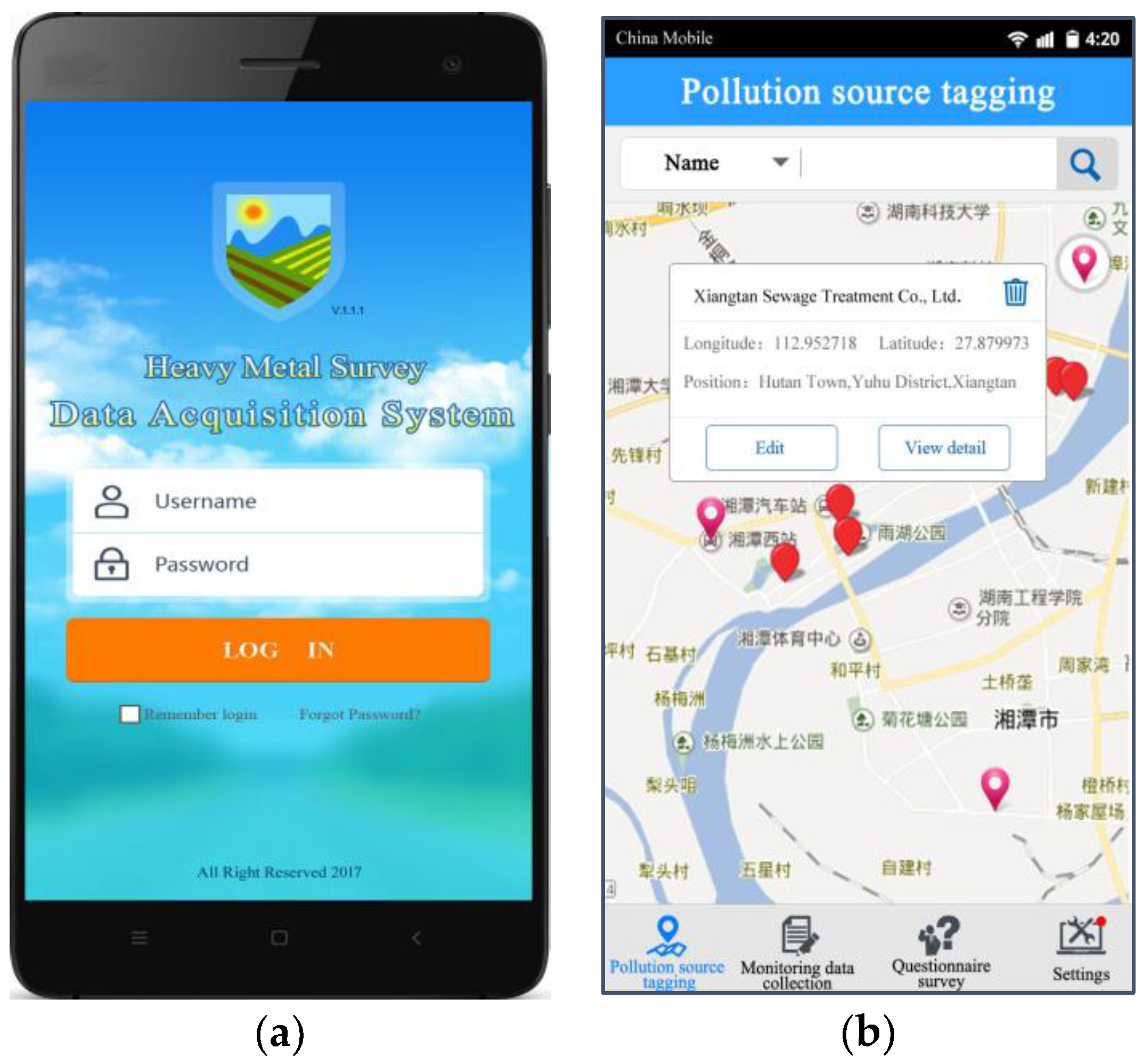 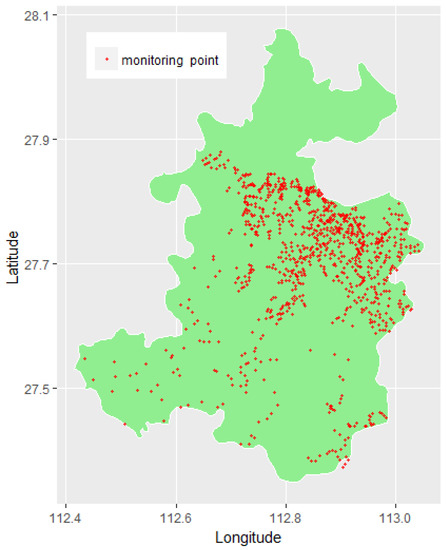 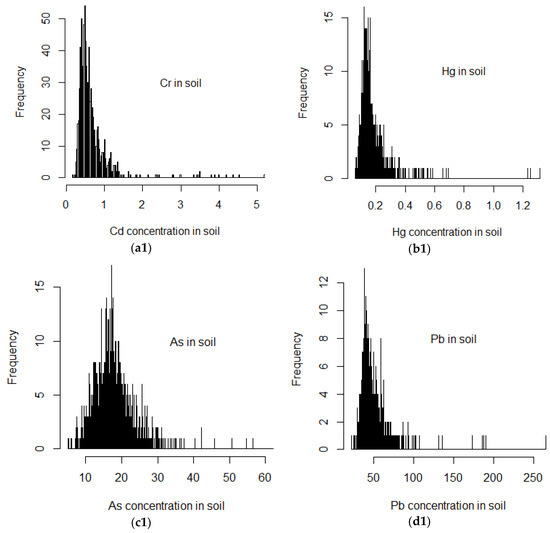 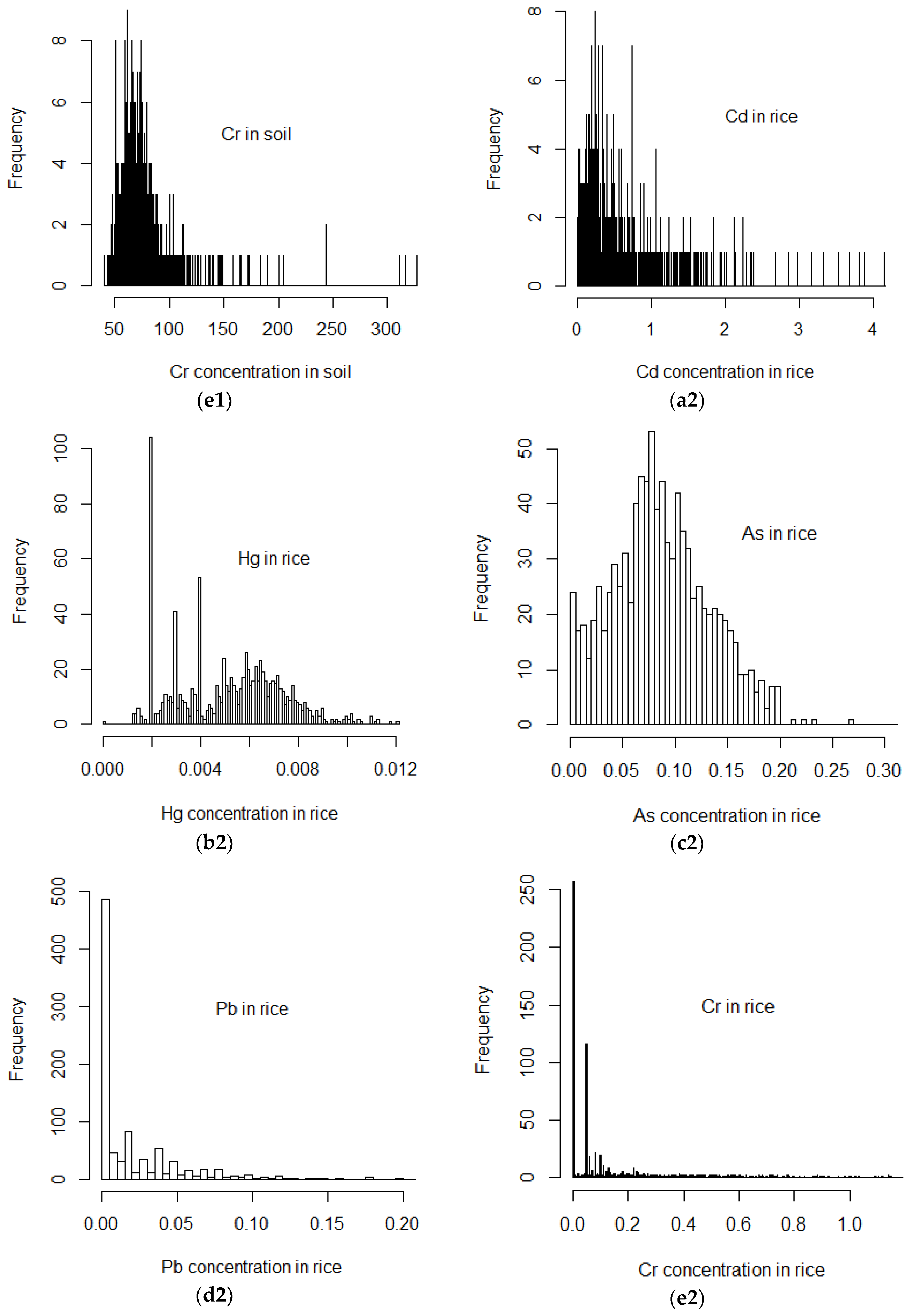 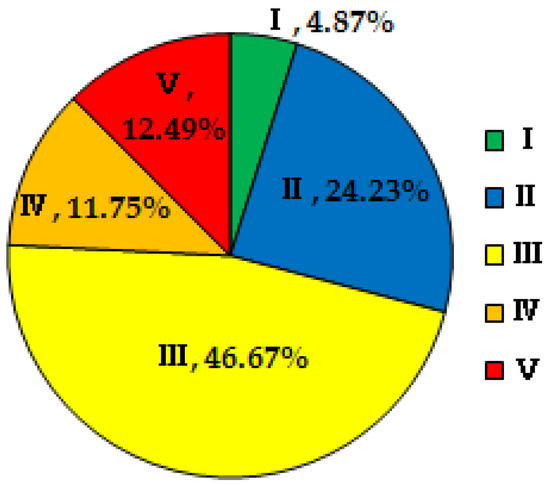 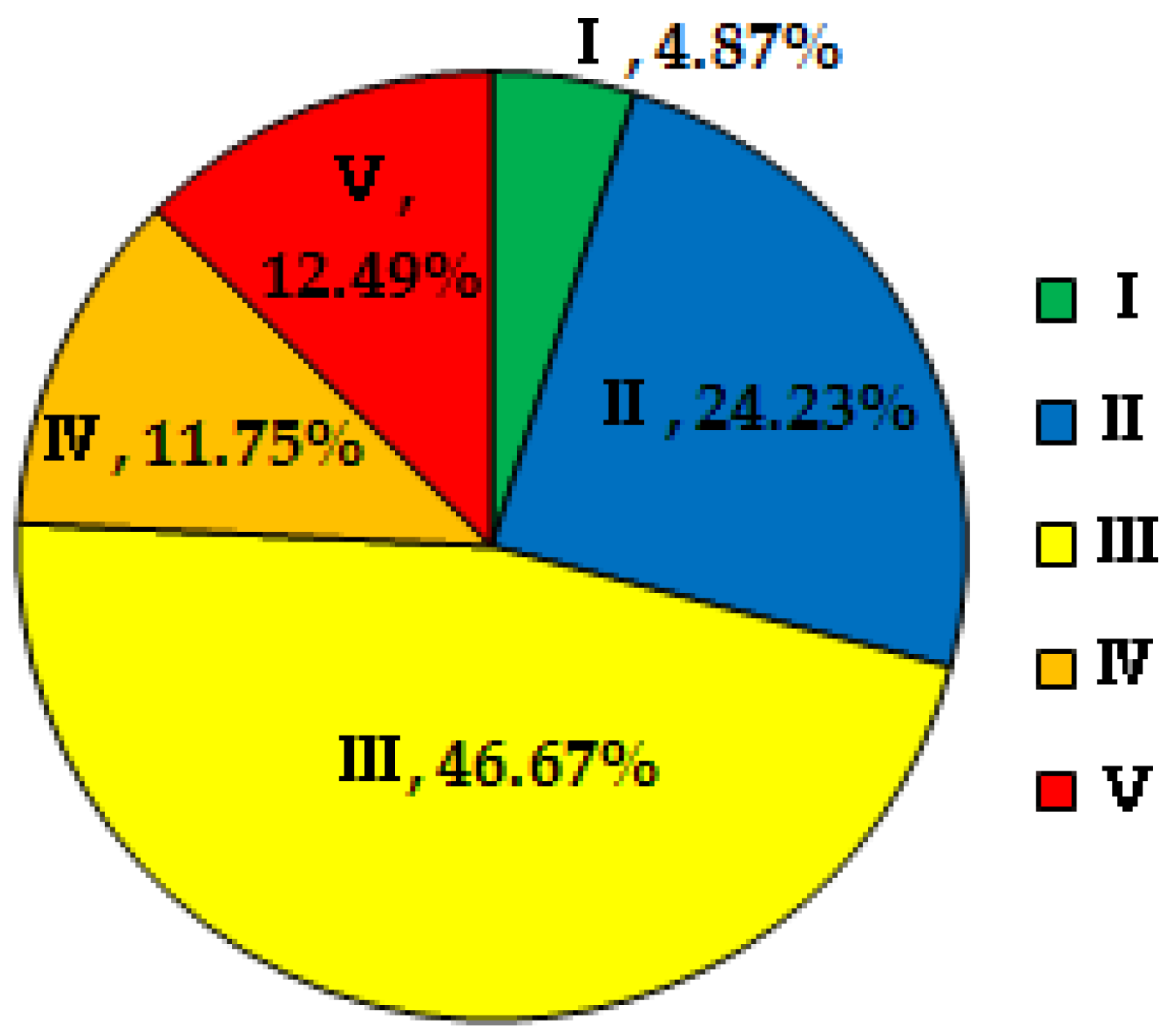 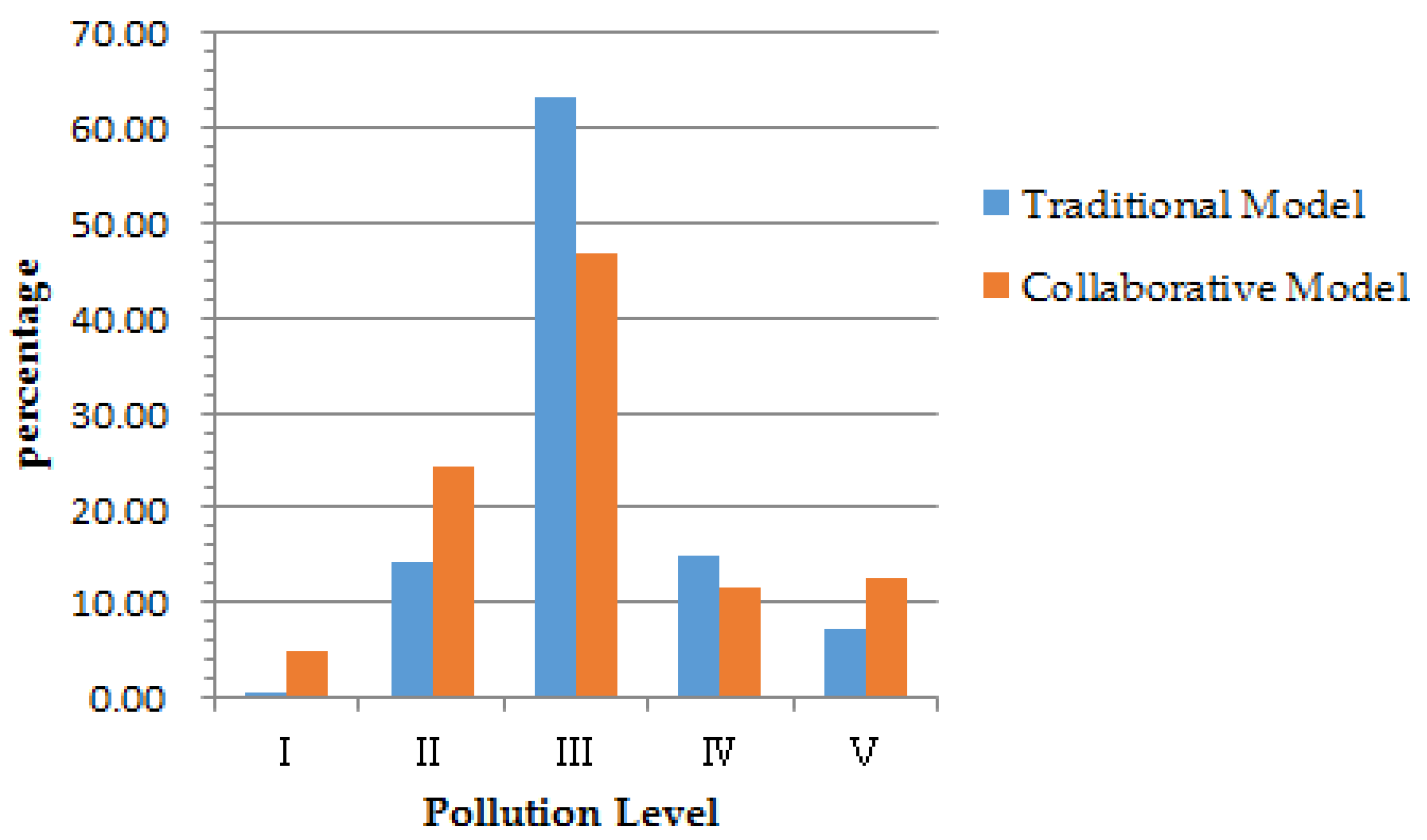