Energy System Models as a Means of Visualising Barriers and Drivers of Forest-Based Biofuels: An Interview Study of Developers and Potential Users

Forest-derived biofuels have been on the agenda for several decades. Despite extensive research and development efforts, forest biofuel concepts have nevertheless not yet been realized on any significant scale. The discrepancy between the expectations from the research community and the lack of momentum regarding biofuel production raises the question of if and how research results can be used to achieve such goals. Here, we report results from an interview study with the aim of evaluating how energy system models can be used to illustrate barriers and drivers for forest biofuels, with focus on Swedish conditions, using the BeWhere model as case. The study is framed as an example of expertise, and problematizes how energy system models are interpreted among expected users. While the interviews revealed some general scepticism regarding models, and what kinds of questions they can answer, the belief was also expressed that increased complexity might be an advantage in terms of being able to accommodate more barriers against forest biofuels. The study illustrates the complexity of this policy area, where an energy system model can answer some, but never all, ‘what if…?’ questions. The results reveal a need for reformation in energy system modelling in order to more explicitly make society the subject of the work, and also illustrate that the belief in expertise as a tool for consensus-building in decision-making should be questioned. View Full-Text
Keywords: energy systems analysis; energy system models; biofuels; interviews; barriers and drivers; expertise energy systems analysis; energy system models; biofuels; interviews; barriers and drivers; expertise
►▼ Show Figures 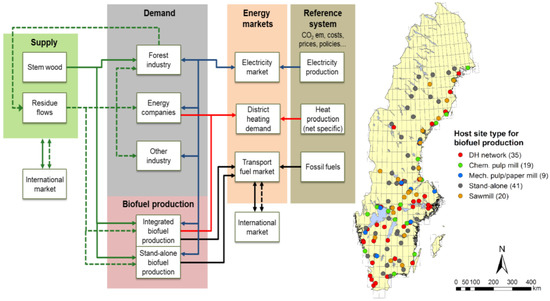 
Fallde, Magdalena; Torén, Johan; Wetterlund, Elisabeth. 2017. "Energy System Models as a Means of Visualising Barriers and Drivers of Forest-Based Biofuels: An Interview Study of Developers and Potential Users." Sustainability 9, no. 10: 1792.