Costs, Benefits and Challenges of Sustainable Livestock Intensification in a Major Deforestation Frontier in the Brazilian Amazon

Since the early 1970s, livestock production has been one of the main economic drivers to the occupation of the Amazon. Characterized by low or zero investment in soil management practices, nutrient supply or technology, livestock became a cheap way to fill and ensure possession of large tracts of land, generally occupied by less than one head of cattle per hectare [1]. Cattle ranching also became widespread in small-sized properties, which followed the practices used in larger farms, based on successive processes of slash-and-burn of primary and secondary forest for the establishment of pastures [2]. The small herd found in smaller properties is often used for the production of dairy products, and for breeding and fattening of calves for larger farms, but overall productivity tends to be low due to both limited technical and financial capacity. Even so, small farmers perceive their herd as savings, as instruments of liquidity, and hedge against inflation [3].
Without proper pasture, animal and overall farm management practices, traditional extensive livestock systems frequently experience a sharp decline in pasture productivity after 5–15 years of grazing, leading to the abandonment of large areas [4]. Consequently, overall livestock productivity (about 80 kg of beef per hectare per year) is well below its potential of 300 kg per hectare per year [5], and forest clearance is still used as a mechanism to compensate for the low performance. Despite a significant decrease in the rate of deforestation in the Amazon of about 80% in 2015 as compared to peak rates in 2004, forest conversion still persists, and cattle ranching accounts for part of this resilient deforestation [6].
The risk of illegal deforestation and land competition due mainly to soy agricultural expansion [7] means beef production in the Amazon region needs to be more efficient. Intensification has been put forward as a main alternative to keeping livestock production profitable and environmentally sustainable at scale since it increases productivity while avoiding forest loss [8]. Cattle intensification also has the potential to make pastureland available to non-livestock-based agricultural commodities [9]. This is strategic in terms of food security considering that by 2050 worldwide demand for agricultural products is expected to increase by more than 50% [10], and that Brazil makes major contributions to the global demand for food [11].
Nevertheless, there are relevant challenges to shifting from extensive practices to intensive and sustainable livestock production in the Amazon region. The need for high investments and low access to credit, combined with a lack of technical assistance and skilled labor, an inefficient infrastructure logistics, and even cultural resistance to the adoption of new managerial practices and technologies make the task challenging. Moreover, adoption of intensification practices entails high upfront costs to farmers and low returns during the period of transition, requiring a behavior change that can only be achieved if producers are convinced of the economic viability of intensification. Considering this and taking the environmental and socioeconomic importance of beef production in the Amazon into account, the objective of this study is to provide an empirical basis for assessing the feasibility of implementing sustainable livestock intensification in consolidated areas of the Amazon region. The “sustainability” of intensification in this study hinges upon mixed perspectives: (i) land sparing effect of intensification/decreased demand for land relative to a business as usual (BAU) scenario; (ii) a “moderate” intensification approach (on average three, but no more than four animal units per hectare (AU/ha; 1 AU is equivalent to 450 kg of animal live weight); (iii) the adoption of a good agriculture practices (GAP); and (iv) the restoration of environmental liabilities. Transition costs and financial indicators were estimated taking into account the adoption of good agricultural and management practices, pasture improvement, and restoration of environmental liabilities. To this aim, the article builds deeply on results in pilot beef farms located in São Félix do Xingu (SFX), an 8.4 million-hectare municipality in the Eastern Amazon region that has experienced widespread conversion of forest to pastureland, and is currently home to the largest cattle herd in Brazil. The study starts with a description of 13 pilot properties and the approach used to estimate sustainable intensification transition costs, followed by a discussion of technical and financial results of the project implementation. The study also identifies and discusses as well risks and opportunities for the intensification of livestock in SFX, including credit needs, jobs generation, and impacts in CO2 emissions or sequestration.

Located in Southeastern Pará, São Félix do Xingu (SFX) occupies an area of 8.4 million hectares (Figure 1). More than half of the municipality is legally protected: 4.5 million hectares of indigenous lands and 1.6 million hectares of protected areas. These expanses play an important role in preventing the advance of deforestation, except for the Environmental Protection Area Triunfo do Xingu, less strict in its use, where pastures occupy approximately 16% (180,000 ha) of its total area. Pastureland also occupies 42% of the remaining non-protected area [12]. Although SFX has been a major deforestation frontier for the last ten years, annual forest conversion has sharply decreased during the period: the area deforested in 2015 represents 25% of that cleared in 2006 [13]. São Félix do Xingu’s 2.2 million animals, most of which are beef cattle, represent 1% of the total Brazilian cattle herd population [14]. Approximately 50% of the herd in the region is intended for the full production cycle (breeding, raising and fattening), 12 percent for raising and 20 percent for fattening; the remaining is used for dairy production [15].

All data were tested for normality and homoscedasticity. For normally distributed data, results are expressed as mean ± standard deviation. Between-group differences in the mean and median were determined with the use of t-tests and Mann–Whitney U test, respectively. Pearson’s correlation coefficient was used to investigate the relationship between pasture size and zootechnical and economic indicators. Sensitivity analyses were performed to determine the impact of variations of ±5% and ±10% in beef sales price, cost of pastureland intervention, and feed costs on the predicted IRR for the farms where this rate could be technically estimated under the intensification scenario. All costs considered in estimates for the pilot properties were the ones prevailing in the SFX region in 2014, and were converted from Brazilian real to US$ using the official exchange rate of 31 December 2014. For the purpose of comparisons, this date was also used to update monetary values from references published before 2014. All GIS analyses were performed using ESRI ArcGIS 10.1 software, and statistical analyses were performed using JMP 11.0.0 (SAS Institute Inc., Cary, NC, USA, 2013).

Overall, the sustainable livestock intensification strategies presented here for the SFX municipality were based on the dynamism of real situations observed in pilot properties, and highlighted the potential for boosting productivity, avoiding deforestation and reducing environmental liabilities in a traditionally underperforming sector. Showing the viability of changing production practices in SFX is very emblematic of the Brazilian Amazon. For years, SFX has been a major deforestation frontier, driven almost exclusively by the expansion of cattle ranching in a continuous and pervasive cycle of land degradation, abandonment and new land conversion.
However, there are a number of challenges that need to be overcome. Upfront costs to farmers are high, and environmentally-aware credit lines are scarce and not easily accessible in a region where land tenure status is commonly unclear; skilled employees, and technical assistance are not readily available. Additionally, contrary to crop farmers, ranchers are not used to a disciplined productive system with a rigid calendar that must be followed at the risk of production loss. Ranchers tend to maintain a certain isolation, their contact with the production chain being generally limited to salt sellers and intermediaries. Significant cultural changes need to occur in a sector that still shows some degree of informality and aversion to new technologies, and that is not used to management practices. This may be a major challenge until farmers are fully convinced of the advantages and profitability of the adoption of the new production system.
Particularly important is the result from pilot farms suggesting the economical infeasibility of the sustainable livestock intensification approach proposed in pasture areas smaller than 150 ha in a region where approximately 80% of the properties fall under that range of pasture size. Another important consideration is that cattle ranching in the region is carried out under precarious conditions, and with high environmental costs. This finding entails a broader discussion on the need of good governance and effective public policies that prioritize lasting support programs that boost sustainable alternative livelihood activities tailored to small producers in the region.

We thank farmers from the 13 pilot properties in São Félix do Xingu for their support in the field; FS Pinto for her valuable suggestions; RS Vale and CP Balieiro for their support with GIS analyses; A. Tiago for her thorough review; and three anonymous reviewers for their insightful comments. Funding was provided by the Gordon and Betty Moore Foundation, Marfrig and Walmart. 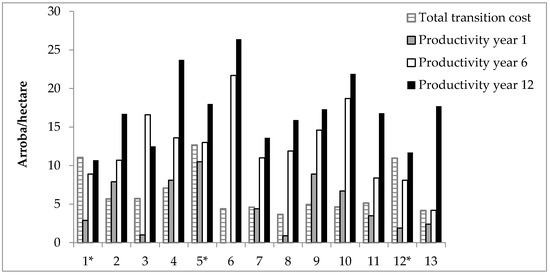 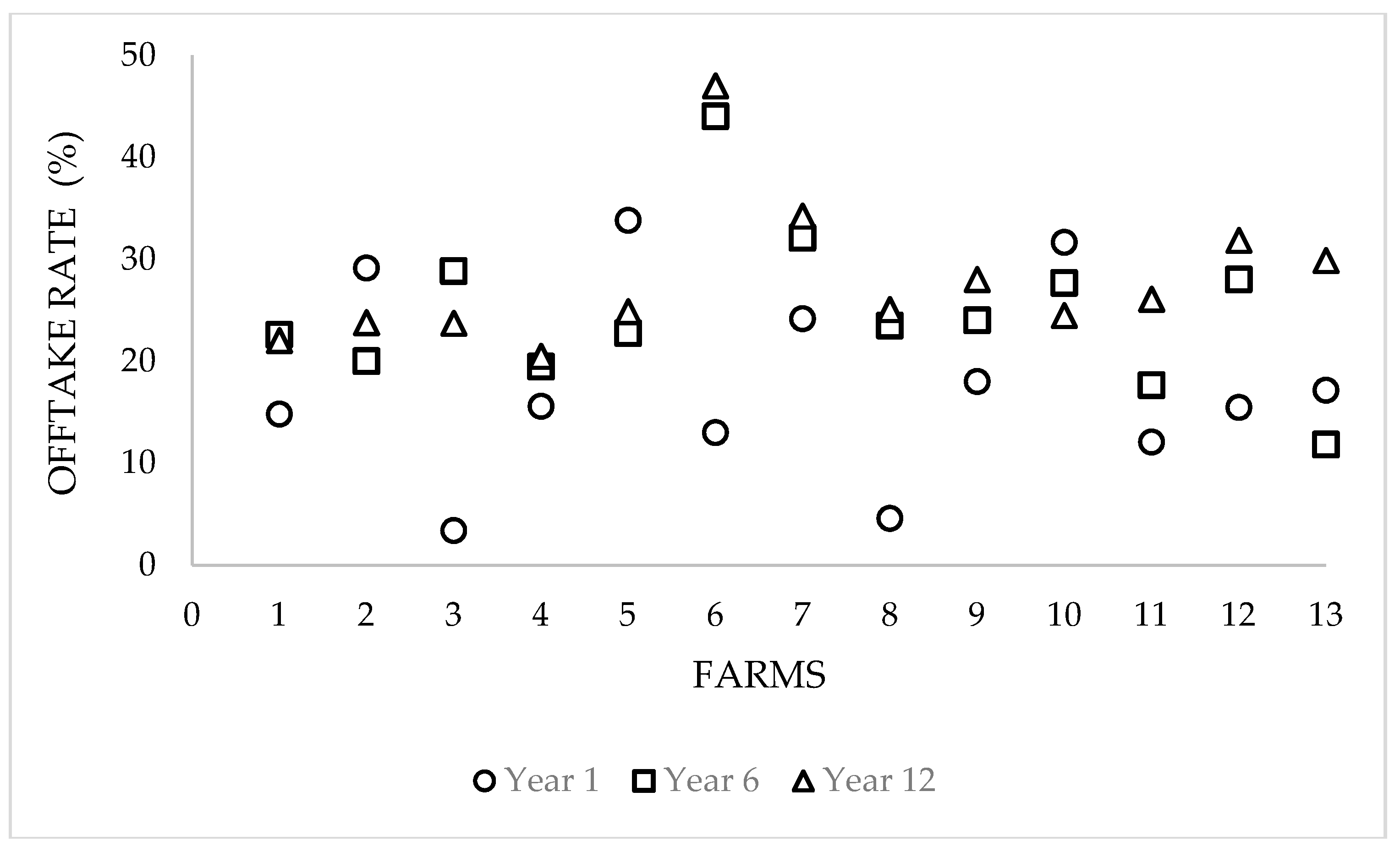 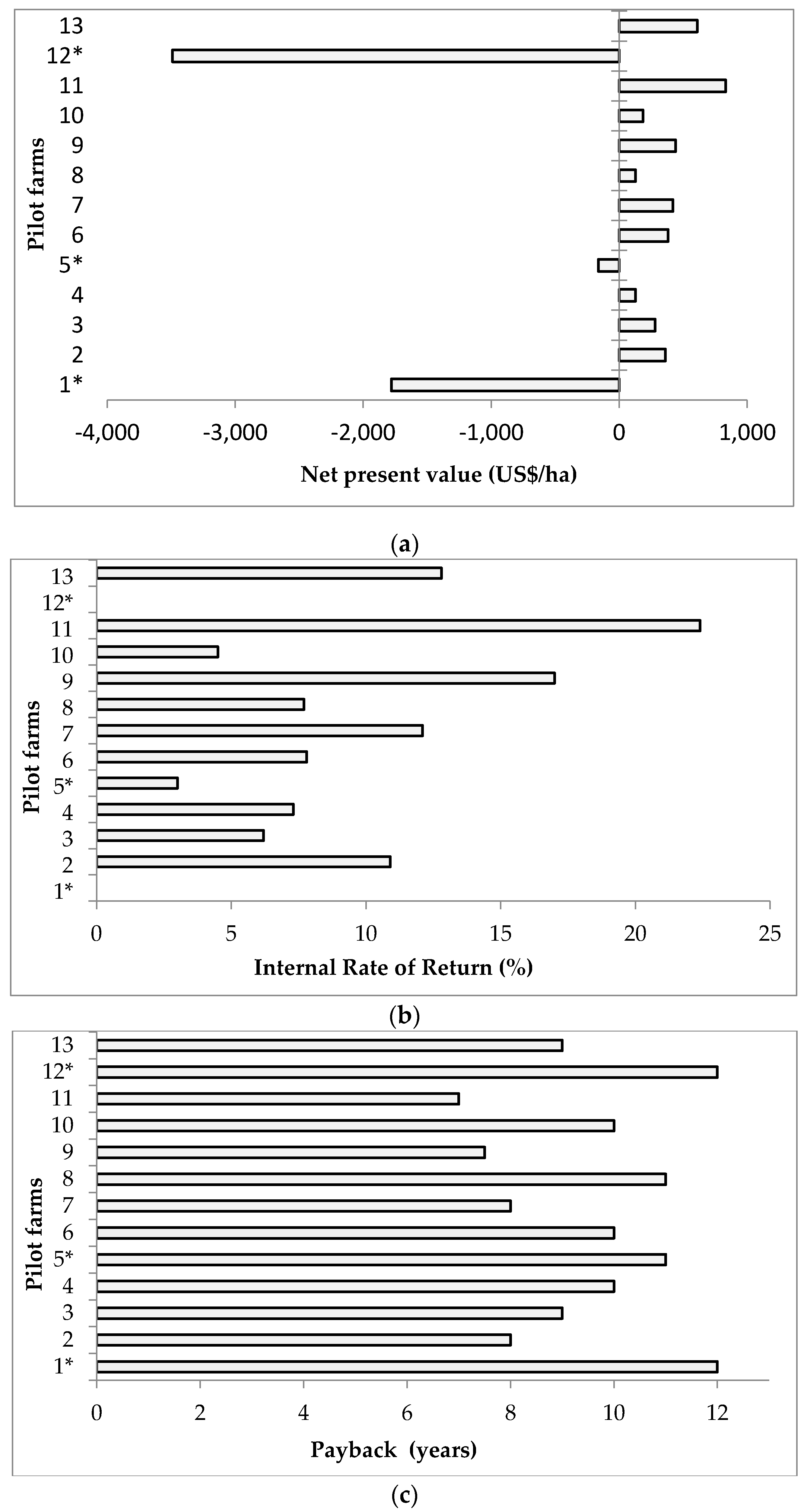 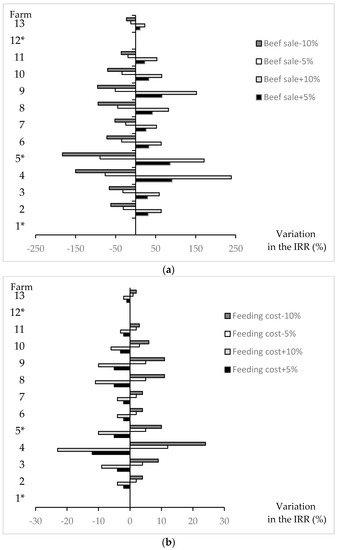 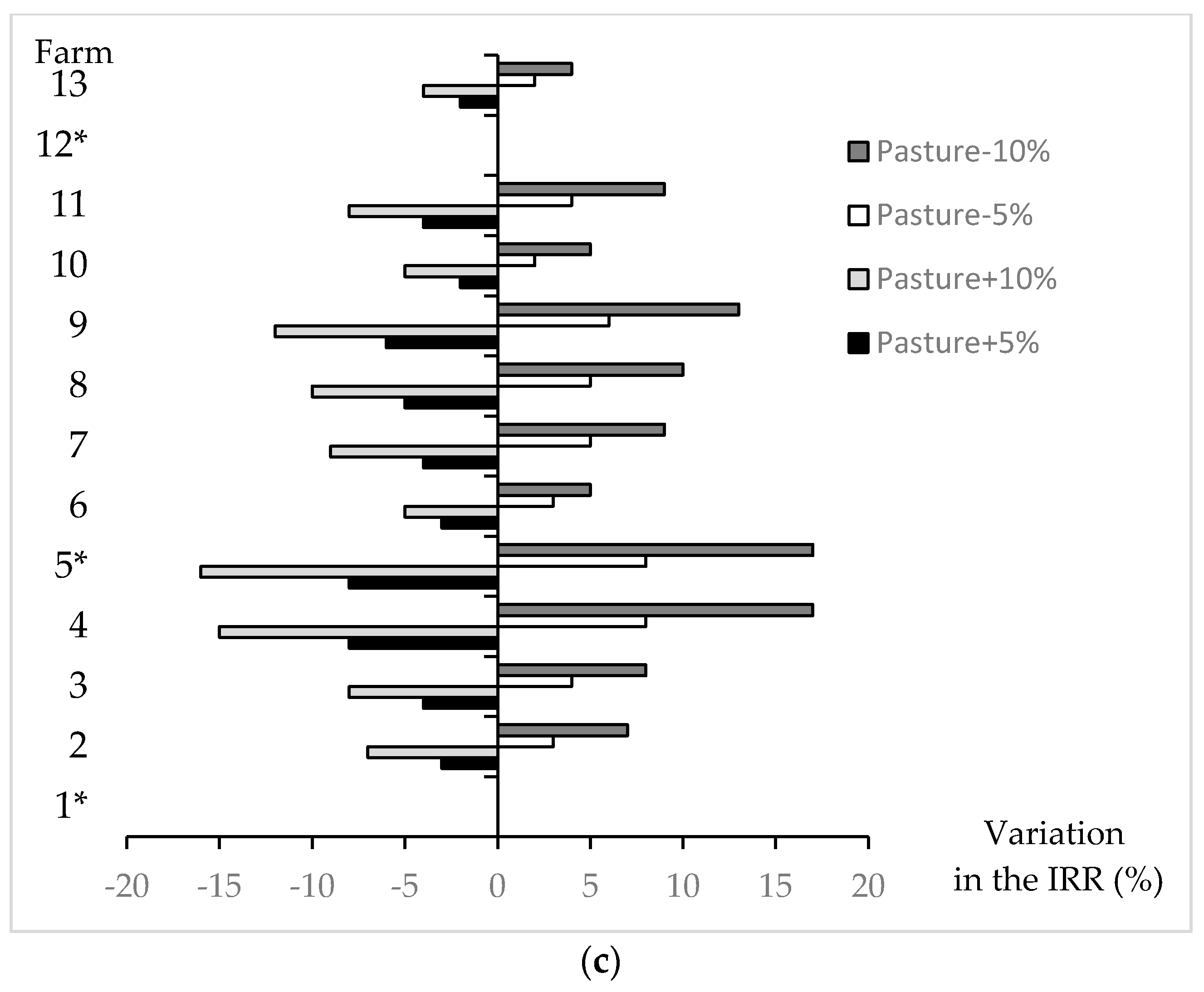