Environmental Collaboration for Sustainability in the Construction Industry: An Exploratory Study in Italy
Next Article in Special Issue

Does Suburbanization Cause Ecological Deterioration? An Empirical Analysis of Shanghai, China
Previous Article in Special Issue

How Do Differences in Land Ownership Types in China Affect Land Development? A Case from Beijing

China has a unique land use system in which there are two types of land ownership, namely, state-owned urban land and farmer collective-owned rural land. Despite strict restrictions on the use rights of farmer collective-owned land, rural land is, in fact, developed along two pathways: it is formally acquired by the state and transferred into state ownership, or it is informally developed while remaining in collective ownership. Taking Beijing, the capital, as an example, and using data from land use surveys in the Changping district of the city, this paper examines the spatial patterns and characteristics of land development along these two pathways, and sets up a multinomial logit model to test whether land development with and without ownership change was affected by the same factors. The findings suggest that: (1) development on collective-owned land is more spatially scattered, and its links to public infrastructure are weaker; (2) transportation infrastructure, farmer income, spatial location, and previous land usage are the major factors that affect land development; nevertheless, the influences of the factors are different for the two pathways. View Full-Text
Keywords: land ownership; dual urban-rural land system; land development; multinomial logit model; Changping district; Beijing land ownership; dual urban-rural land system; land development; multinomial logit model; Changping district; Beijing
►▼ Show Figures 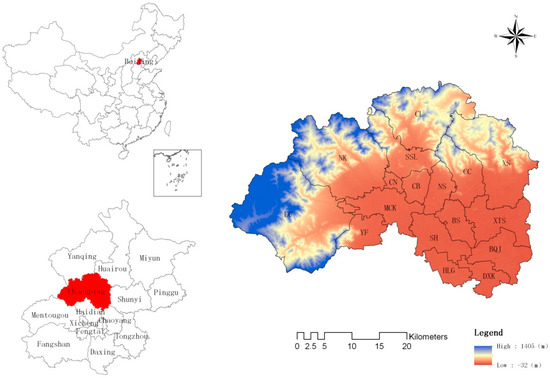