Drought Risk Assessment Based on Vulnerability Surfaces: A Case Study of Maize
Previous Article in Journal

Dynamic Simulation of Urban Expansion Based on Cellular Automata and Logistic Regression Model: Case Study of the Hyrcanian Region of Iran

The hypothesis addressed in this article is to determine the extent of selected land use categories with respect to their effect on urban expansion. A model that combines a logistic regression model, Markov chain, together with cellular automata based modeling, is introduced here to simulate future urban growth and development in the Gilan Province, Iran. The model is calibrated based on data beginning in 1989 and ending in 2013 and is applied in making predictions for the years 2025 and 2037, across 12 urban development criteria. The relative operating characteristic (ROC) is validated with a very high rate of urban development. The analyzed results indicate that the area of urban land has increased by more than 1.7% that is, from 36,012.5 ha in 1989 to 59,754.8 ha in 2013 and the area of the Caspian Hyrcanian forestland has reduced by 31,628 ha. The simulation results, with respect to prediction, indicate an alarming increase in the rate of urban development in the province by 2025 and 2037 that is, 0.82% and 1.3%, respectively. The development pattern is expected to be uneven and scattered, without following any particular direction. The development will occur close to the existing or newly-formed urban infrastructure and around major roads and commercial areas. If not controlled, this development trend will lead to the loss of 25,101 ha of Hyrcanian forest and, if continued, 21,774 ha of barren and open lands are expected to be destroyed by the year 2037. These results demonstrate the capacity of the integrated model in establishing comparisons with urban plans and their utility to explain both the volume and constraints of urban growth. It is beneficial to apply the integrated approach in urban dynamic assessment through land use modeling with respect to spatio-temporal representation in distinct urban development formats. View Full-Text
Keywords: land use change; urban sprawl; logistic regression; markov chain; cellular automata; Gilan province land use change; urban sprawl; logistic regression; markov chain; cellular automata; Gilan province
►▼ Show Figures 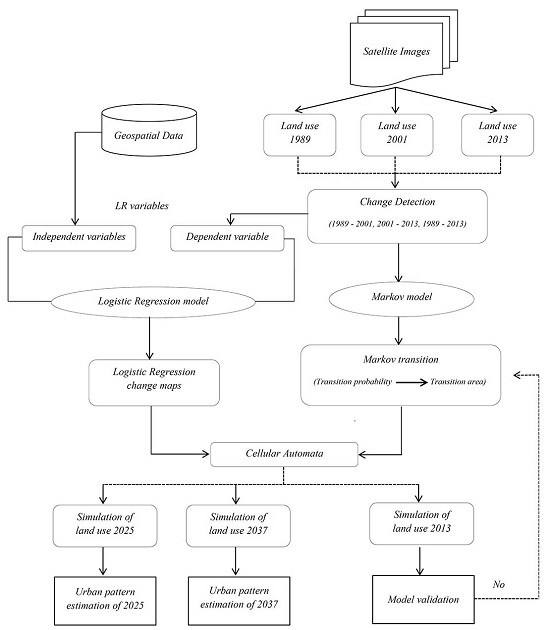