Growing Gardens in Shrinking Cities: A Solution to the Soil Lead Problem?

Boom, Bust and Beyond: Arts and Sustainability in Calumet, Michigan

Cycles of boom and bust plague mining communities around the globe, and decades after the bust the skeletons of shrunken cities remain. This article evaluates strategies for how former mining communities cope and strive for sustainability in the decades well beyond the bust, using a case study of Calumet, Michigan. In 1910, Calumet was at the center of the mining industry in the Upper Peninsula of Michigan, but in the century since its peak, mining employment steadily declined until the last mine closed in 1968, and the population declined by over 80%. This paper explores challenges, opportunities, and progress toward sustainability associated with arts-related development in this context. Methods are mixed, including observation, interviews, document review, a survey, and secondary data analysis. We follow Flora and Flora’s Community Capitals Framework to analyze progress toward sustainability. Despite key challenges associated with the shrunken city context (degraded tax base, overbuilt and aging infrastructure, diminished human capital, and a rather limited set of volunteers and political actors), we find the shrunken city also offers advantages for arts development, including low rents, less risk of gentrification, access to space, and political incentive. In Calumet, we see evidence of a spiraling up pattern toward social sustainability resulting from arts development; however impacts on environmental and economic sustainability are limited. View Full-Text
Keywords: art; mining; boom and bust; community development; social capital; infrastructure; tax base; community identity art; mining; boom and bust; community development; social capital; infrastructure; tax base; community identity
►▼ Show Figures 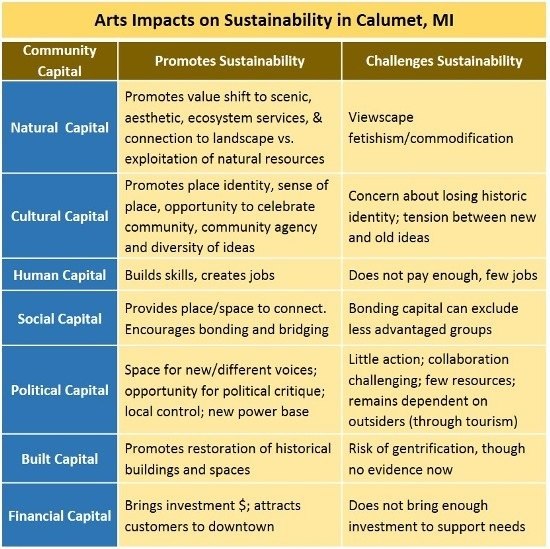