Due to the multiple impacts of landform effects, spatial heterogeneity and land use policies, farmland dynamics in mountainous areas are complicated. This study investigated farmland dynamics based on land use data from a typical mountainous area, Panxi, in China for 1990, 2000 and 2010, discussed the relationship between altitude, slope and farmland changes and presented an analysis of the driving forces of farmland change. Our findings are as follows: (1) from 1990 to 2010, the area of converted farmland was relatively small (313 km2), accounting for only 2.6% of the region’s farmland. Farmland was mainly converted to forest and grassland as a result of the Returning Farmland to Forest Program; (2) The spatial distribution of land use types differed significantly. The presence of water bodies influenced farmland and built-up land, while forest and grassland showed “landform-oriented” characteristics. Built-up land was especially variable in distribution, indicating that it was more vulnerable to human activities; (3) The vertical differentiation of farmland changes was obvious. At altitudes <2500 m, the data displayed a trend of conversion from forest to farmland, while at >2500 m, this trend reversed. Thus, 2500 m serves as an altitudinal boundary between farmland and forest in Panxi. The largest area of forest-farmland transfer occurred on slopes steeper than 15°, not 25°, as defined by China’s policy of Returning Farmland to Forest; (4) The driving forces of farmland changes varied. Decreases in farmland were negatively correlated with proximity to rivers and roads. Increases in farmland were positively related to temperature and negatively related to both population density and altitude. View Full-Text
Keywords: land cover changes; vertical differentiation; driving forces; returning farmland to forest; Panxi region land cover changes; vertical differentiation; driving forces; returning farmland to forest; Panxi region
►▼ Show Figures 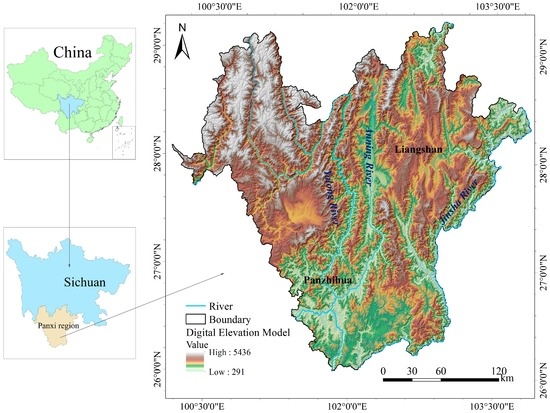