2. Analysis of Efficiency of Distributed Photovoltaic in China

2.1. The Trend Analysis of Distributed Photovoltaic

2.2. The Efficiency Analysis of Distributed Photovoltaic

3. The Introduction of Comprehensive Efficiency of Photovoltaic Generation and Analysis of Its Influencing Factors from the Perspective of SD

3.2. The Applicability Analysis of Distributed Photovoltaic Comprehensive Efficiency from the Perspective of SD

3.3. The Analysis of Distributed Photovoltaic Comprehensive Efficiency Based on SD

4. The Optimal Path of Comprehensive Efficiency of Distributed Photovoltaic Based on Regional Integrated Energy Management System

4.1. The Path Selection for Comprehensive Efficiency of Distributed Photovoltaic

4.1.1. The Selection of Optimal Direction Based on SD

4.2.1. Introduction to the Methods

(1) The Process of Simulation
This paper performed simulations using a typical example of IEEE33-node distribution network wiring. Suppose the operation time of the project is 50 years, the maximum annual load loss is 4500 h, the maximum utilization time is 1800 h, and the range of maximum capacity of each node is 50–150 kW. The electricity price of power distribution is 0.7 Yuan/kWh, and the operation cost is 0.72 Yuan/kWh. Photovoltaic power generation is 10,000 Yuan/kW, which is equivalent to the annual construction costs 200 Yuan per kW. Over the same period, coal-fired power plant emits 950 g CO2 when it generates one kilowatt electricity energy.
To optimize the siting and sizing, applying Equations (9)–(14), and using the algorithm of Particle Swarm Optimization (PSO), let 40 particles get iterated for 1000 times, this paper obtained the results of siting and sizing shown in Figure 6. As Figure 6 shows, applying 60 kW, 100 kW, 90 kW, 100 kW, 120 kW, and 100 kW capacity of photovoltaic equipment in 12, 14, 18, 25, 30, and 32 nodes, respectively, is the best location and optimal capacity of distributed photovoltaic when taking economic and environmental performances into account.
To optimize the generation dispatching, the load at other times of day was adjusted on the basis of the total load of the reference case. The 24-h load and price forecast based on the photovoltaic power generation price in China are shown in Figure 7.
The ultra-short term photovoltaic output can be obtained by analyzing the flow chart in Figure 5 and the data of reference case, and the results are as follows.
The figure of photovoltaic active power forecast shows the power trend of photovoltaic devices within 24 h. As can be seen in Figure 8, the distributed photovoltaic system has output during 5:00 a.m.–20:00 p.m. and the output between 9:00 a.m. and 14:00 p.m. was above 100 kW which was the peak period. Arranging the output of photovoltaic power generation on the basis of forecast will reduce the influence of uncertain factors on the level and capacity of system generation, which provides effective support for revising the previous generation output and making the plan of day-ahead output dispatching.
To optimize the demand response, it is assumed that the distributed photovoltaic users in the case are residential users, and the load characteristics of the residential users and the price fluctuation of time-of-use (TOU) are shown in Table 3 and Table 4.
Changes of total load before and after the implementation of TOU price policy can be obtained by analyzing the existing data and Equations (15)–(17). Figure 9 shows the results.
It can be seen in Figure 9 that the load peak period is cut down obviously after the residential users participating in the campaign of demand response, and the total load curve is smoother. Referring to the changes of the load in peak or valley period, residential users can reasonably arrange electricity plans, and power companies will take incentives or punitive measures to promote rational use of photovoltaic power generation and guarantee the stable price on the basis of satisfying users’ demand.
(2) The Conclusions of Simulation
In this paper, the IEEE33-node distribution network wiring is selected as the research object. This paper did simulation experiments by using the methods of sitting and sizing, generation dispatching and demand response. The simulation results show that the optimization paths proposed in Section 4.2.1 can be used to select the best location and determine the optimized capacity of photovoltaic generation. Moreover, it will enhance the ability of energy absorption of the distributed photovoltaic generation by forecasting the output of photovoltaic units. The relationship between photovoltaic generation and users’ demand can be coordinated by analyzing the effects of TOU on demand response or applying price incentive measures. The optimization methods proposed in this paper from the supply side, energy conversion and demand side provide technical support for improving the comprehensive efficiency of distributed photovoltaic.

4.3. The Realization Guarantee of Optimal Path Based on the Regional Integrated Energy Management System

5. The Policy Recommendations for the Optimization of Comprehensive Efficiency of Distributed Photovoltaic

Forming price based on the market mechanism is the direction of China’s reform on electricity system and it plays an important role in of the steady development of electricity in the future. Thus, price mechanism has become the priority of implementing policy mechanism in China. Distributed energy tariff policy experience of developed countries such as America and Japan show that a virtuous circle of market-oriented resource allocation and supply–demand affecting price can promote the development of high-efficient and low-carbon distributed photovoltaic [28,29].
When verifying the electricity price of distributed photovoltaic, we should improve differential pricing policies by considering light conditions, load situations, situation of construction and other factors in different regions. Market-oriented electricity price mechanism should be established on the basis of economic development, market demand and planning objectives in different regions and thus make electricity price adjustment flexible. Then we can effectively protect the reasonable profits of distributed photovoltaic and improve the generation efficiency as well as achieve sustainable development.

Based on the issues of energy crisis, environmental pollution and problems in the development of large-scale integrated energy in China, this paper focuses on the efficiency optimization of distributed photovoltaic. Under the guidance of the theory of system dynamics, integrated energy management system was established. This paper took efforts to research the optimal path for comprehensive efficiency of distributed photovoltaic from technical and policy perspectives, and draws the following conclusions:

This paper proposes technological methods including siting and sizing optimization, operation dispatching optimization and demand response optimization from energy resource-side, energy conversion and energy demand-side. The results of simulations reveal that all of these methods can effectively improve energy conversion efficiency and utilization efficiency. The regional integrated energy management system built in this paper can ensure the optimization of the distributed photovoltaic comprehensive efficiency on the basis of scientific analysis and effective control. Based on the policy recommendations from the three aspects of industrial incentives, price subsidy, and operation supervision, this paper provides guidance and advice for high-efficient development of distributed photovoltaic.

This study is supported by the National Natural Science Foundation of China (NSFC) (No. 71501071), Ministry of Education in China Project of Humanities and Social Sciences (No. 14JF005), and the Fundamental Research Funds for the Central Universities (No. JB2014033).

All authors contributed equally to this work. Xiaohua Song proposed the original idea and checked the whole manuscript. Yun Long and Xubei Zhang were main authors of Section 1, Section 2, Section 3, Section 4, Section 5 and Section 6, while Leming Li and Zhongfu Tan focused on the optimal path and provided guidance. All authors read and approved the final manuscript. 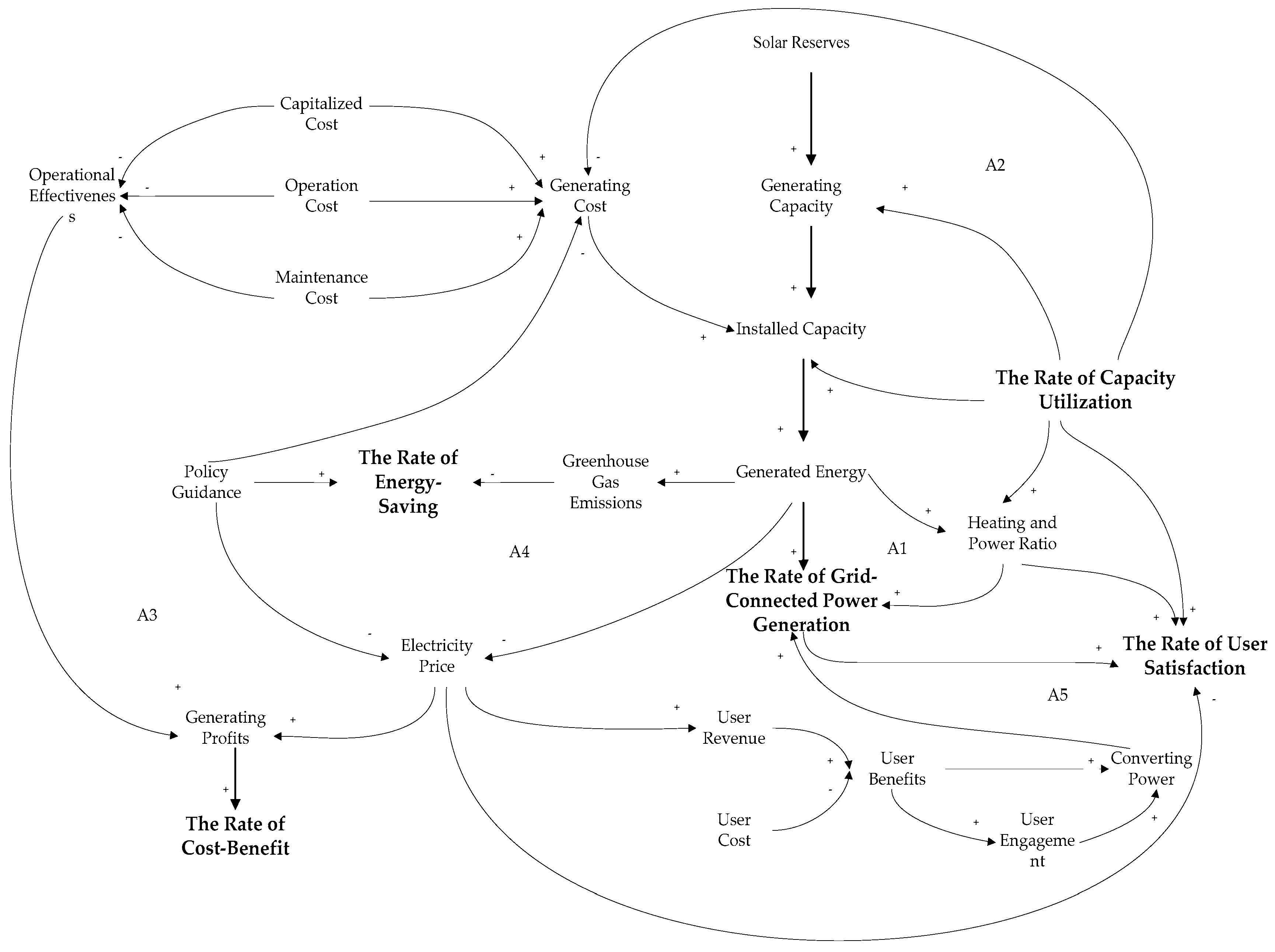 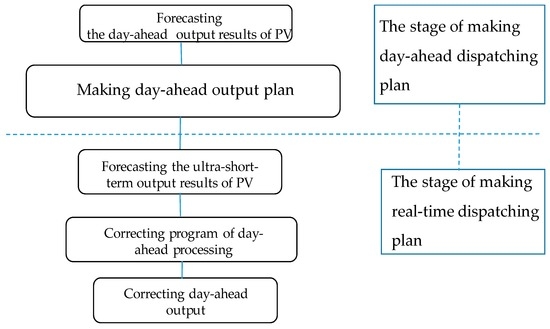 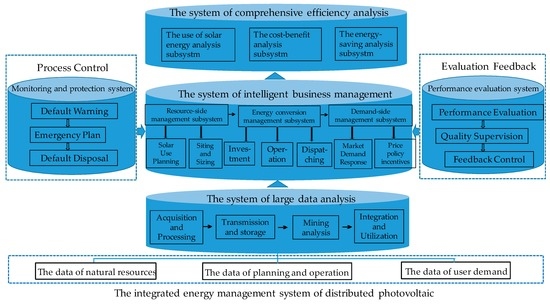 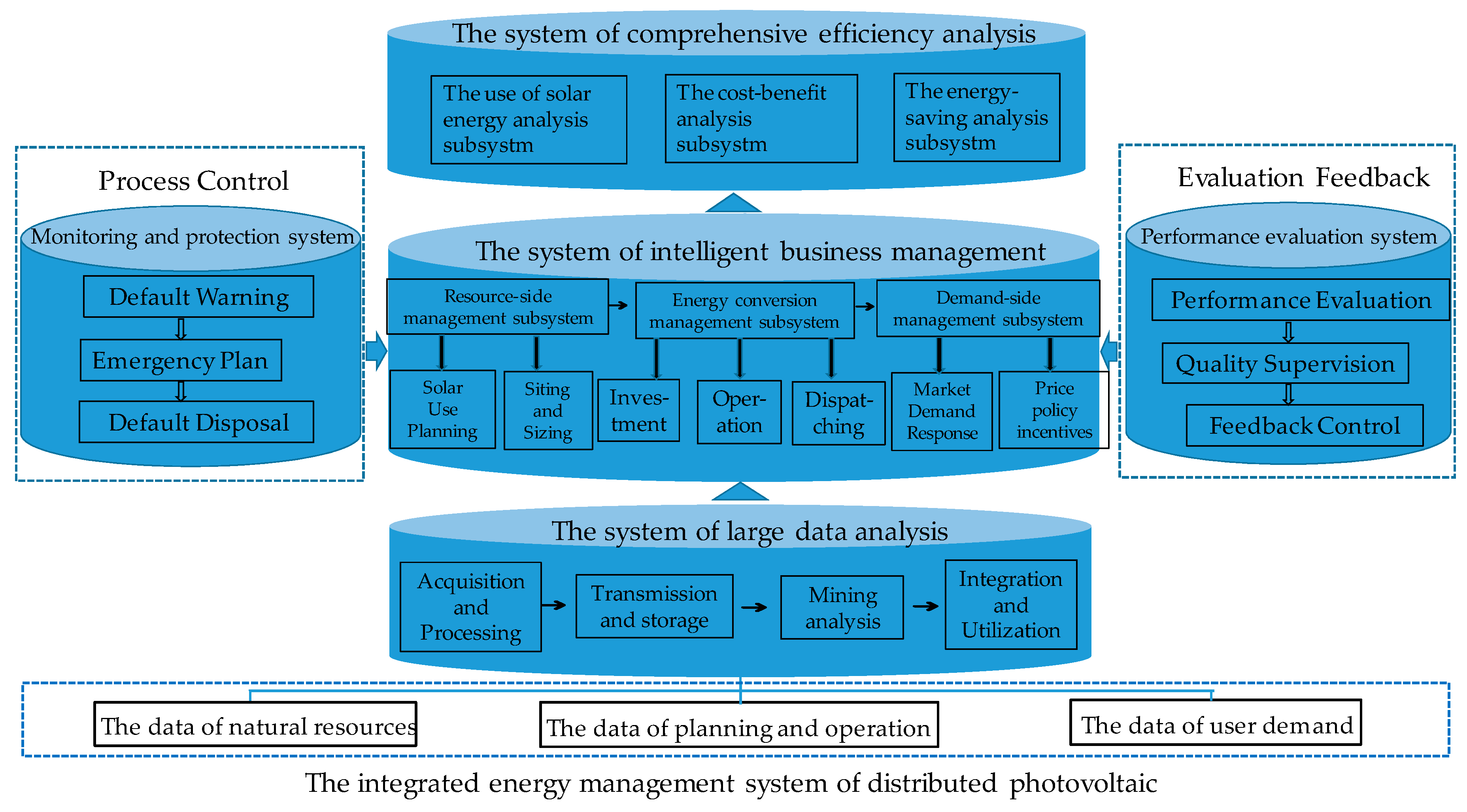 Table 1. Related policies of distributed photovoltaic in China since 2012.

Table 2. The demonstration zones of distributed photovoltaic in China (official statistics from NEA).