How Attractive Is Upland Olive Groves Landscape? Application of the Analytic Hierarchy Process and GIS in Southern Spain

Grassland and Wheat Loss Affected by Corn and Soybean Expansion in the Midwest Corn Belt Region, 2006–2013

Increases in agricultural commodity price triggered by ethanol production and other socioeconomic conditions have dramatically affected land uses and agronomic practices in the U.S. This study used crop-specific land cover data from the U.S. Department of Agriculture (USDA) to analyze agricultural expansion and crop rotation pattern from 2006 to 2013 in the Midwest Corn Belt (MWCB): nine states including Illinois, Indiana, Iowa, Kansas, Minnesota, Missouri, Nebraska, Ohio, and South Dakota. We identified a total of 3.9 million acres’ grassland loss between 2007 and 2012. The net loss of grassland occurred mainly along the western MWCB, an area with competing demand for limited water supply. Net conversion of grassland to corn or soybean is likely the result of a resumption of cropping on lands previously enrolled under the USDA Conservation Reserve Program (CRP), as well as expansion beyond CRP lands. Wheat, small grains, and other crops were also impacted by corn and soybean expansion. The amount of corn planted on corn increased by 23% between 2006 and 2013, whereas the amount of continuous soybean cropping fluctuated over time. View Full-Text
Keywords: agricultural expansion; corn; soybeans; grassland loss; midwest corn belt agricultural expansion; corn; soybeans; grassland loss; midwest corn belt
►▼ Show Figures 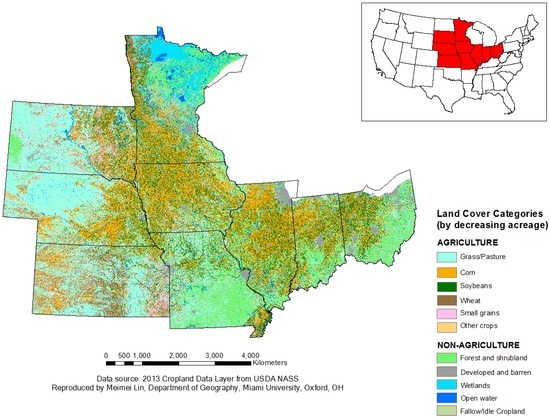