Effect of Organic Potato Farming on Human and Environmental Health and Benefits from New Plant Breeding Techniques. Is It Only a Matter of Public Acceptance?
Previous Article in Journal

Since 1978, China has undergone an institutional reform, from a welfare-oriented housing allocation system to a market-oriented one. But with high housing prices, affordability is a major obstacle to home ownership for Chinese citizens. Now, the government has started to change the goal of housing policy from present economic benefits to sustainable housing, so future generations will have a decent place to live. Housing is an important indicator for social stratification, and home ownership, which is an important component of social sustainability in the Chinese context, is influenced by multiple factors that vary across countries. Although China has a long tradition of home ownership, there is a lack of comprehensive research on post-reform housing inequality. By undertaking a large-scale field study in the city of Xiamen, our research explored to what extent home ownership varies across socio-economic classes, and improves understanding of the reasons behind home ownership inequality. It was discovered that people have a variety of resources from which housing can be obtained, and that commercial housing served as the primary housing source, although, due to path dependence, public housing still comprises an important source of housing, as well as self-built houses. A structural equation model (SEM) was used to further explore the driving forces of home ownership inequality. The model indicated that hukou (household registration) status has the strongest effect on home ownership, followed by education, with family income and occupation as less important factors. Along with income and education, home ownership has a direct effect on people’s perception of their own socio-economic status (SES). A probability model of home ownership was developed, based on logistic regression. Local families with higher levels of income and education with at least one member working in a publicly owned organization had a higher probability of home ownership. Lastly, since 1999, housing reform in Xiamen has tended to increase social stratification, with negative economic and social consequences. Therefore, policies should pay more attention to the welfare of renters and integrating the migration process into urban planning. View Full-Text
Keywords: housing reform; sustainable housing policy; social stratification; home ownership; China housing reform; sustainable housing policy; social stratification; home ownership; China
►▼ Show Figures 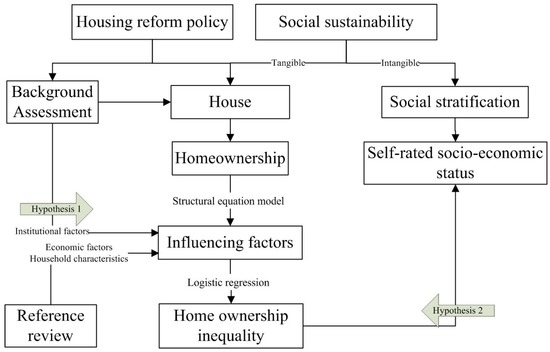