To check how REDD+ payments correlate with the quality of institutions in countries receiving these payments, we used scatter plots and simple correlation analysis.
Data on REDD+ payments come from the Voluntary REDD+ Database (VRD), which is managed by the Food and Agriculture Organization and the World Conservation Monitoring Centre of the United Nations Environment Programme [13]. The VRD data are collected based on information provided by funders and recipients of REDD+ payments and specified in the agreements that they sign to fund and carry out REDD+ activities. These two data streams are kept separately in the VRD. We used the data provided by funders because these data are more comprehensive. The VRD is based on voluntary reporting, therefore it is not complete. For example, we were not able to distinguish for all countries between the three different phases of the REDD+ process: readiness, demonstration activities, results-based investments. Readiness involves preparation of the relevant strategies, plans, policies, and capacity-building for further implementation of REDD+ activities (this is of key importance from the point of view of ensuring the required institutional quality). Demonstration activities are carried out along with the implementation of the strategies and other measures. Results-based investments have to be fully measured, reported, and verified within relevant agreements. In consequence, we aggregated all types of payments attributable to individual countries into one number. Still, in spite of these difficulties, the VRD is the most complete and detailed database on REDD+ payments available. As of mid-June 2015, the VRD presented almost USD 18 billion worth of REDD+ payments to be distributed between 2006 and 2022.
The VRD presents data for 104 countries, but only 101 of those are the ultimate REDD+ recipient countries (Non-Annex 1, using the UNFCCC nomenclature). The other three countries listed in the VRD are mostly developed countries which only pass funds on to developing countries. REDD+ payments presented in the VRD flow either directly to developing countries, or to developed countries and international organizations which then distribute the funds to developing countries. We only analyzed payments directly sent to 91 recipient developing countries (USD 7.8 billion or nearly 50% of all payments reported in the VRD), as the other streams could not be attributed to specific developing countries.
To ensure comparability between countries, and to make our study consistent with that of Ebeling and Yasué [4], we expressed REDD+ payments as a share of gross domestic product (GDP). GDP data comes from the World Bank’s World Development Indicators database [14]. Expressing REDD+ payments as a share of GDP reveals the extent to which these payments can influence a country’s economic situation. From the group of 91 recipient countries identified above, we removed one outlier (Guyana) for which the scheduled REDD+ payments’ share of GDP was 18.73%, which is far above any other country in the sample (the next highest share was 3.34%, and the average share in the sample was 0.54%). Indeed, in the strange case of Guyana, a significant share of funds came from only one funder (Norway), and Norway’s selection of Guyana has been criticized as political [15].
Indicators describing institutional quality come from another database of the World Bank, i.e., the World Governance Indices (WGI) [16]. This is the same database that was used by Ebeling and Yasué [4], but we used data that is 10 years more recent, i.e., for the year 2013. We used all six indicators presented in the database (Voice and Accountability, Political Stability and Absence of Violence, Government Effectiveness, Regulatory Quality, Rule of Law, and Control of Corruption) but focused special attention on the latter two. Those two were also used by Ebeling and Yasué [4], and they seem to be the most relevant in terms of discussing and analyzing the problems of a potential “ecosystem service curse”. Rule of Law summarizes the level of respect for law, property rights, court verdicts, and contracts, as well as the probability of crime. Corruption Control refers to how public power is used for private gain, and it includes different forms of corruption as well as the “capture” of a state by elites and private interests. The values of all of the World Bank’s six governance indicators range between −2.5 and 2.5, with lower values indicating a worse situation.
The electronic supplementary material contains the dataset used for our analyses.

Figure 1 depicts the relationships between the aggregated REDD+ payments scheduled to be paid to developing countries between 2006 and 2022 (expressed as percentage of those countries’ 2013 GDP) and all six WGI indicators. Based on these diagrams we can see that most countries receiving REDD+ payments still perform relatively poorly with regard to those governance indicators that are the most important from the point of view of preventing the negative phenomena related to the so-called ecosystem service curse, i.e., the Regulatory Quality, Government Effectiveness, Rule of Law and Control of Corruption.
Figure 2 replicates Figure 3 from Ebeling and Yasué [4], with two differences: (1) instead of potential annual RED payments, we considered the already agreed-upon REDD+ payments for the period of 2006–2022; (2) we did not log the REDD+ to the GDP ratio, which we did not consider necessary given the message already emerging from the present picture. Like in the case of Ebeling and Yasué [4], we used an average of two governance indicators: Rule of Law and Control of Corruption. These two indicators provide a very good illustration of a country’s ability to make the best of REDD+ payments. Also, as can be seen in Figure 1, the performance of the studied countries is very similar with regard to these two indicators.
Based on Figure 2, we can see that, for the time being, REDD+ income may be a significant source of income for only a few countries. These countries mostly have poor institutional quality levels, with the sole exception of Vanuatu. Table 1 shows the numbers of countries divided into groups depending on their quality of institutions and the REDD+ payments that they are receiving. Over 96% of REDD+ payments are distributed to countries with very weak institutions (those with an average of Rule of Law and Control of Corruption index below zero).
Interestingly, a statistically significant correlation between the REDD+ payments and the quality of institutions is only evident for the sample of 34 countries with the highest shares of REDD+ payments in their GDP (i.e., where the expected payments exceed 0.15% of GDP) (Table 2). Figure 3 and Figure 4 replicate Figure 1 and Figure 2 for this sample, which allows us to examine the situation in countries where REDD+ payments count more than in the rest of the countries previously analyzed. The only institutional quality indicator that does not exhibit a statistically significant correlation with REDD+ payments in the smaller sample is Control of Corruption. Finally, we also looked at the mean institutional quality indicator used by Ebeling and Yasué [4] and also found a statistically significant correlation for the smaller sample. 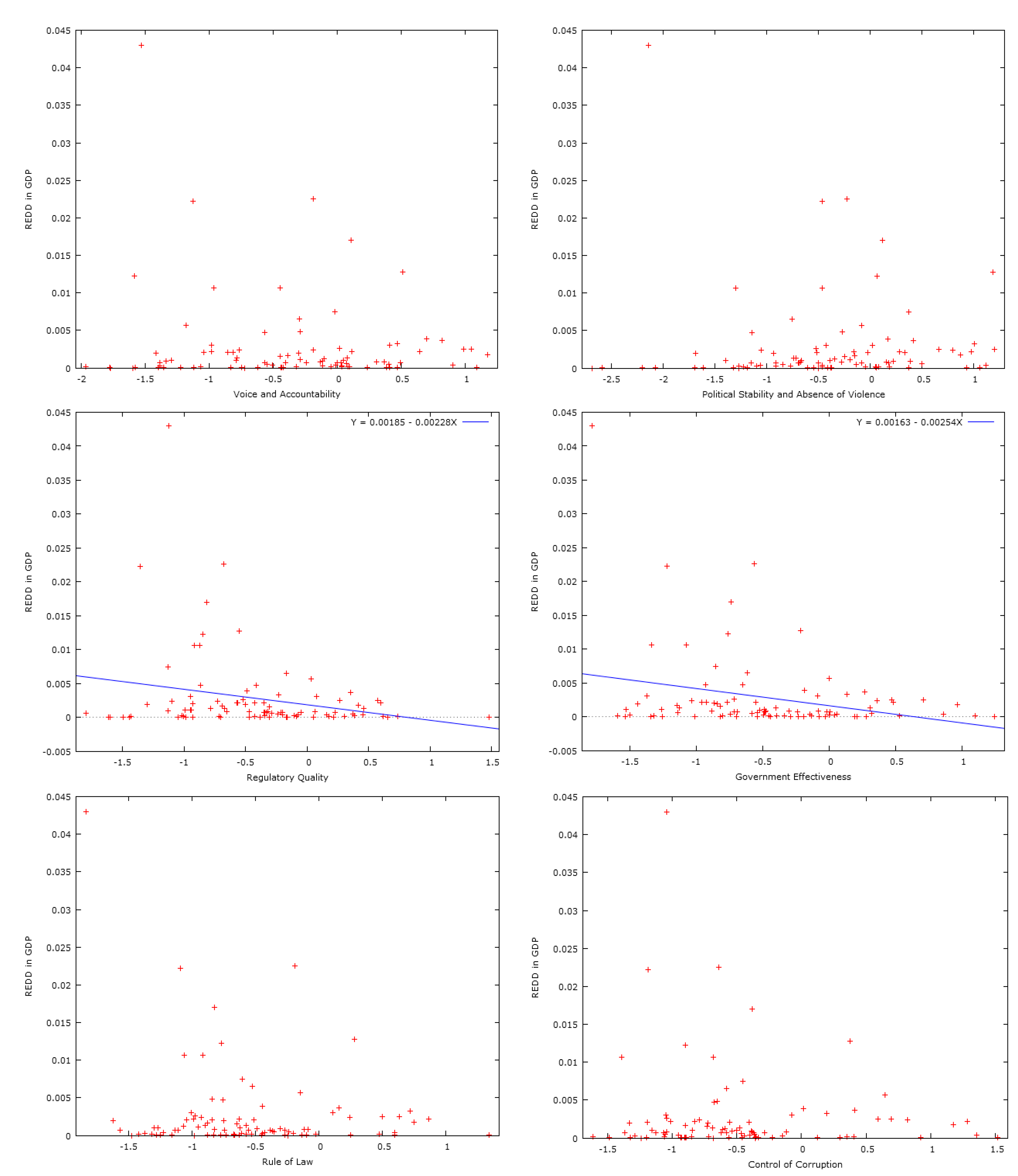 Table 1. Number of countries falling into different groups depending on the average of Rule of Law and Control of Corruption indices and the REDD+ income they receive. 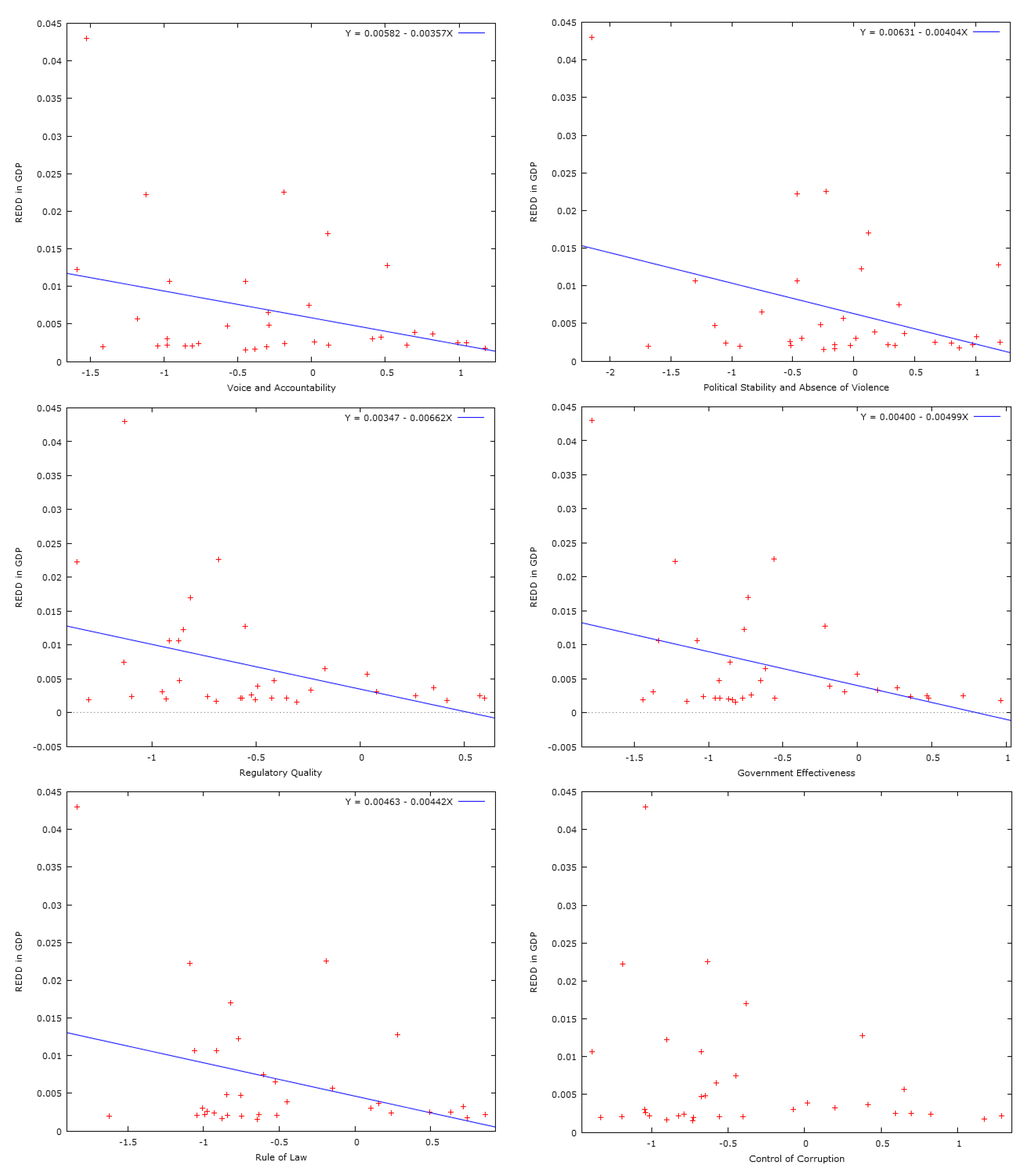 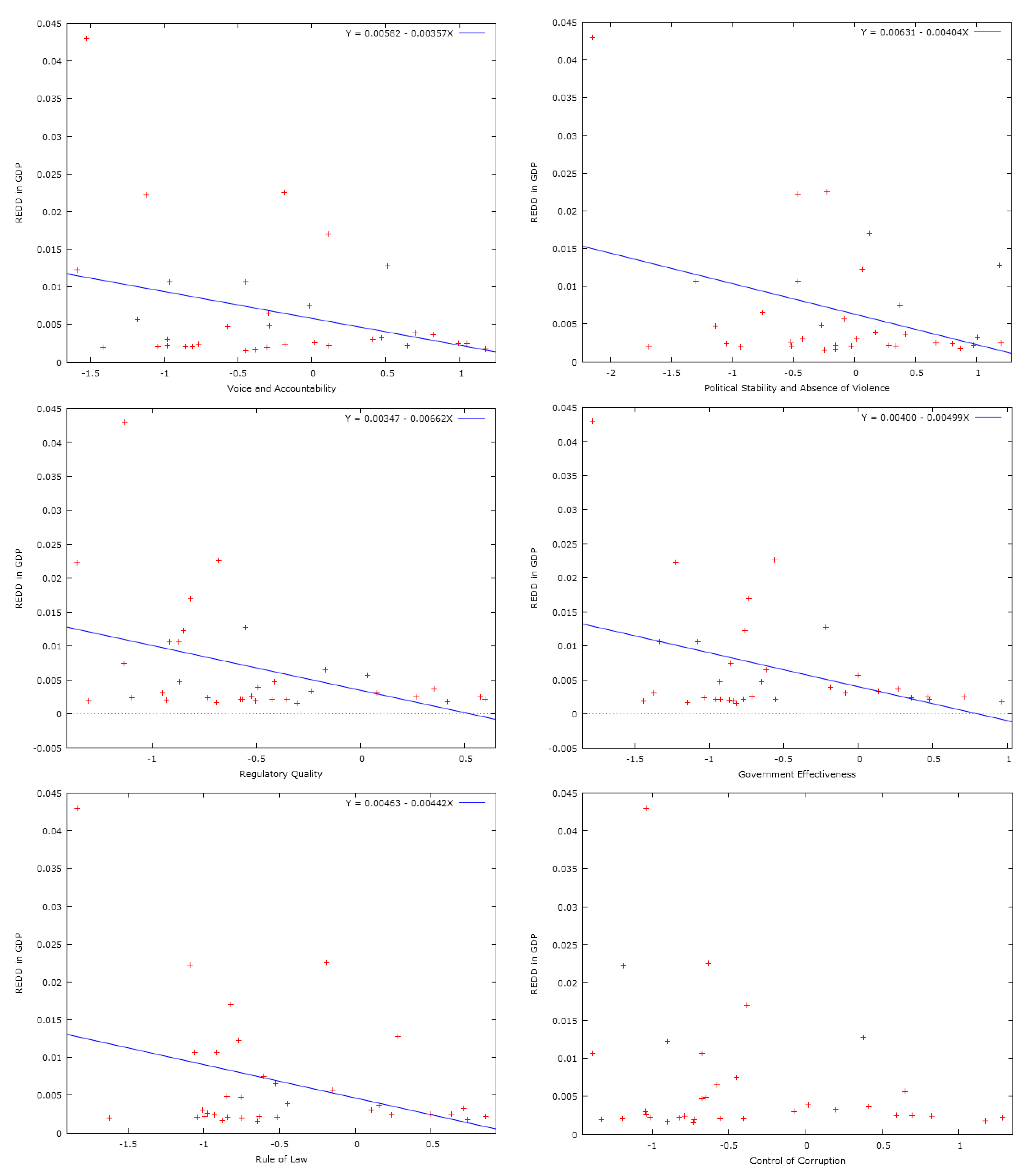 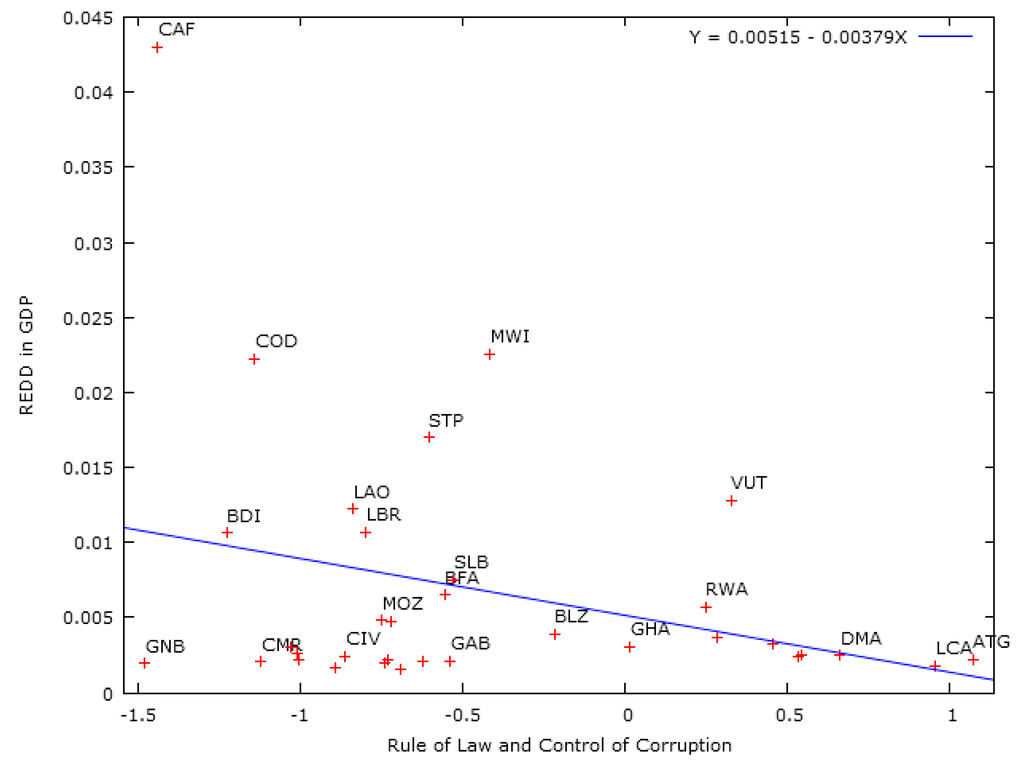 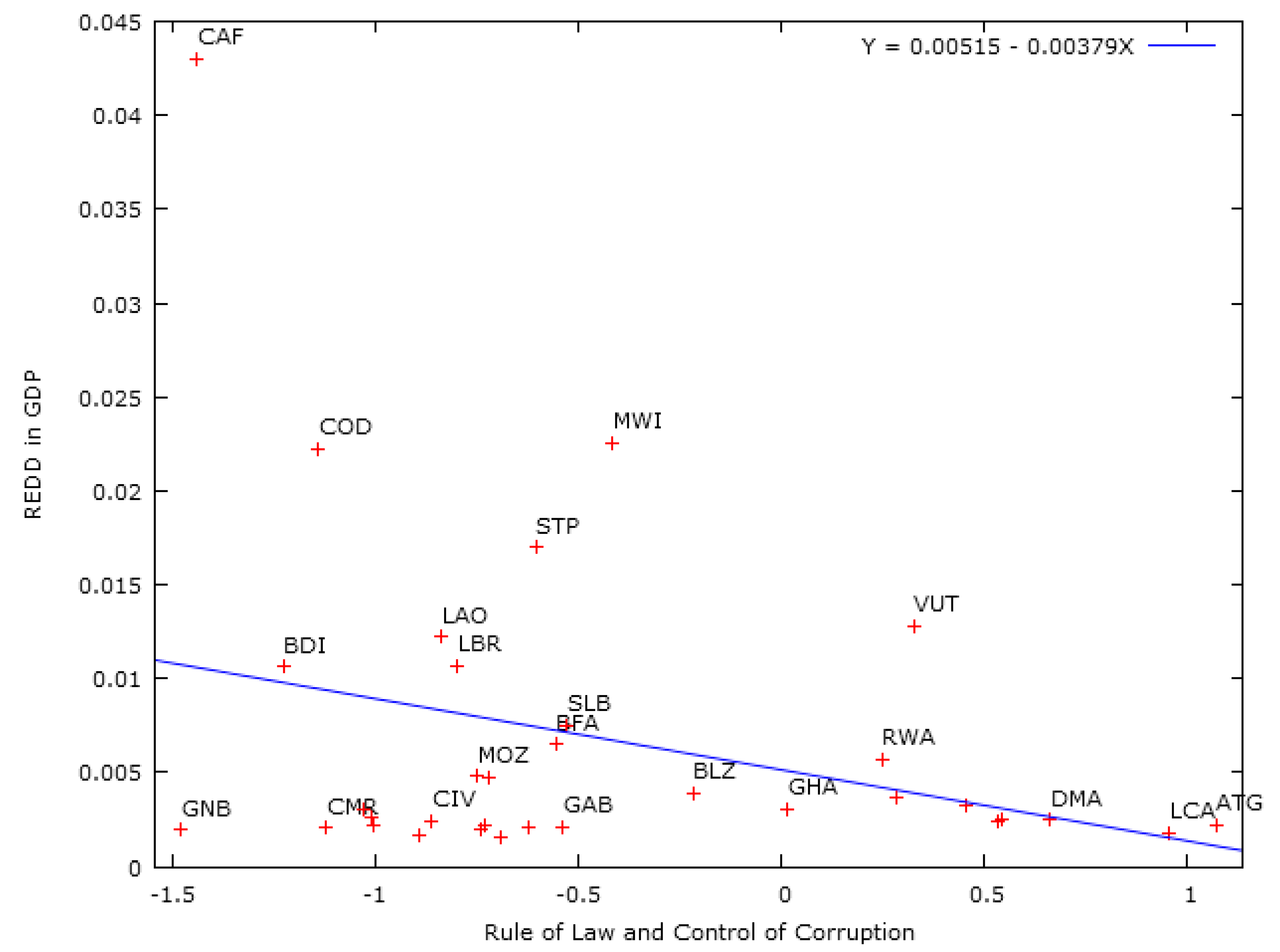 This research has been funded by the Polish Ministry of Science and Higher Education (Project No. IP2012 018572).