The Response of Grain Potential Productivity to Land Use Change: A Case Study in Western Jilin, China

Western Jilin is located at 43°22′ N–46°18′ N, 121°36′ E–126°12′ E and includes 12 counties (or cities) which are called Baicheng, Songyuan, Taonan, Da’an, Zhenlai, Tongyu, Qian’an, Fuyu, Qianguo, Changling, Nong’an and Shuangliao. The total area is 5.5 million ha (Figure 1). Western Jilin is the transitional region from black soil in temperate sub-humid areas to chestnut soil in a temperate sub-arid steppe and typical farming-pastoral ecotone. Annual precipitation is 370–410 mm, far less than the annual evaporation (1500–1900 mm) ≥10 °C annual accumulated temperature is 2900–3200 °C and moisture coefficient is 0.5. One hundred years ago, the wide range of alluvial plain in Western Jilin was one of the famous pastures in China. However, it now is mainly occupied by cultivated land.

The data used in this research included land use data, meteorological data, terrain elevation data, soil data and statistical data.
The data sources of land use that used in this article included remote sensing, terrain, socio-economic statistical and survey data as well as various thematic maps. We divided land use into eight categories: farmland, woodland, grassland, water body, build-up land, alkali-land, marsh and unused land.
In consideration of their fidelity and free access, we used high-resolution raster DEM from the shuttle radar topography mission (SRTM) C-band data were used to derive the terrain elevation data set [29].
Meteorological data for 1975–2010 included monthly mean minimum temperature, monthly mean maximum temperature, monthly cumulative precipitation, monthly cumulative radiation, monthly mean relative humidity, monthly mean wind speed and monthly wet day frequency. The data were obtained from 19 national meteorological stations maintained by the Chinese Meteorological Administration. The monthly data for the above seven key plant growth factors were interpolated to raster surfaces with a 1000 m resolution by using ANUSPLIN software based on the DEM of Western Jilin [30,31,32].
Soil data were obtained from a nationwide soil database at a scale of 1:1,000,000 which was provided by the Data Center for Resources and Environmental Sciences at the Chinese Academy of Sciences. The attributes included type, constituents, depth, and water-holding capacity.
Statistical data (such as grain yields and irrigated area of each county) mainly consist of official statistics from Jilin Bureau of Statistics. 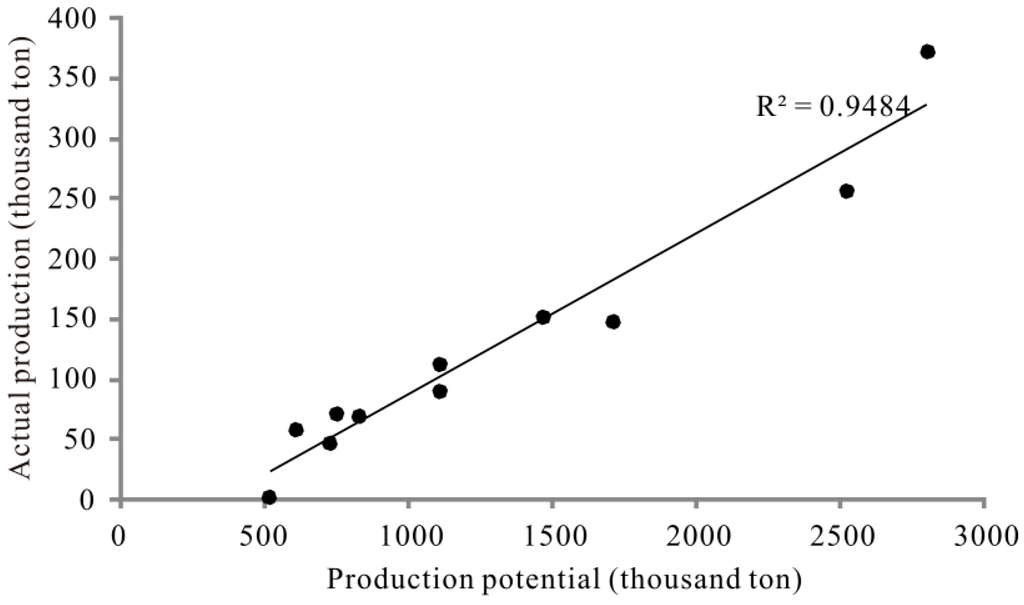 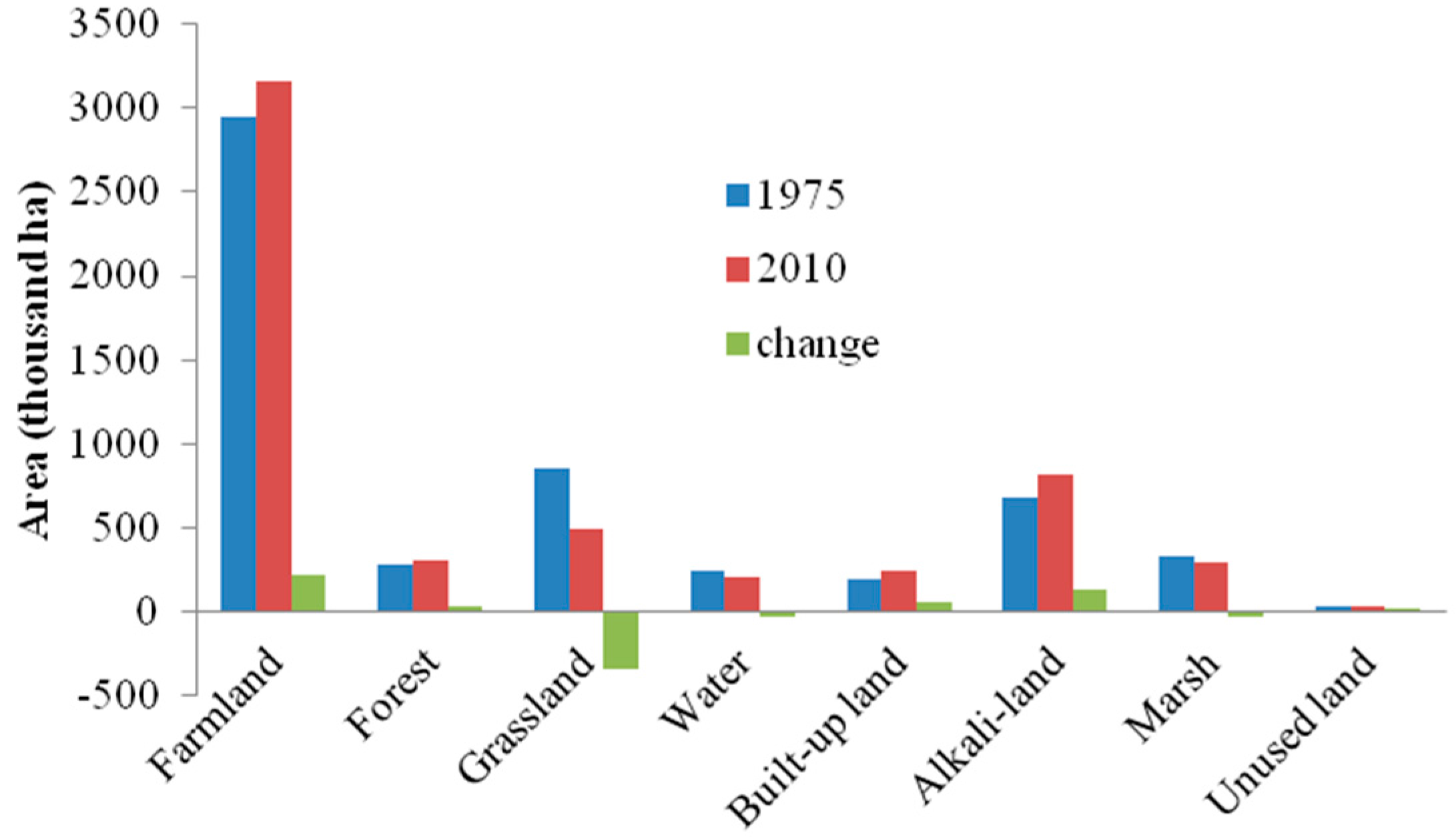 The total grain potential productivity of Western Jilin in 1975, 2000 and 2010 was 14.18 million tons, 16.62 million tons and 19.12 million tons respectively. There was an increase of 34.8% in total production between 1975 and 2010 (Figure 4). This was mainly because of the changes in farmland and climate. Western Jilin was occupied by cultivated land which increased at a rate of 6000 ha/year between 1975 and 2010 [34]. At the same time, the irrigation percentage increased from 15.9% to 24.3% due to technological progress and economic development. The temperature in Western Jilin increased by about 2 °C, and it also experienced a 100 mm decreases in precipitation in recent 50a, which affected the grain potential productivity [35,36].

4.1. Response of Grain Potential Productivity to Land Use Change between 1975 and 2000

The most notable feature of the land use type conversion in Western Jilin was the conversion between farmland and other land use types between 1975 and 2000. In this period, there were 252,600 ha of non-cultivated land converted into farmland and 84,600 thousand ha of arable land converted to non-cultivated land, which resulted in a net increase of 168,000 ha of arable land. The increase in arable land mostly came from grassland (126,200 ha), forest (72,300 ha) and marsh (49,600 ha); the decrease in arable land mostly converted into forest (35,300 ha), built-up land (30,400 ha), grassland (7800 ha), marsh (5500 ha) and alkali-land (4300 ha) (Figure 7).
The most important land use conversion for the increase in grain potential productivity was the conversion of grassland to farmland between 1975 and 2000 which caused the total grain potential productivity to increase by 0.43 million tons. Although the conversion of grassland to farmland increased the total grain potential productivity in Western Jilin, it caused serious damages to the environment [37,38]. For example, grassland reclamation not only destroyed the grassland resources and reduced the coverage rate of vegetation, but it also broke the balance between salt and water in soil, exacerbated soil moisture evaporation and the salt accumulation process, and triggered soil salinization [39,40,41].

4.2. Response of Grain Potential Productivity to Land Use Change between 2000 and 2010

This study had some limitations. Extreme weather conditions—which can have a tremendous impact on the grain potential productivity—were not considered. Also, it was assumed that the supply of water for crop growth was sufficient in the irrigation scenario; however, the actual availability of water provided by irrigation still posed limitations on crop growth in actual practice [2]. In addition, the irrigation percentage was the mean level in Western Jilin and was difficult to express the difference in spatial terms, which would inevitably lead to some bias in the results.
Moreover, most of the grain potential productivity data were simulated data, which was not compared with actual yield. Thus, future research should focus on the yield gap between grain potential productivity and actual yield. This could guide land-use optimization and cultivated land renovation.

Fei Li designed and performed the study, reviewed the literature and conducted the interviews. Shuwen Zhang and Xinliang Xu assisted in fine-tuning the literature and results. Jiuchun Yang, Qing Wang, Kun Bu and Liping Chang collected and collated the basic data. All the authors contributed immensely to the conceptualization and development of the paper. Both authors have read and approved the final manuscript.