Can Consumers Understand Sustainability through Seafood Eco-Labels? A U.S. and UK Case Study
Next Article in Special Issue

The Impact of Green Space Changes on Air Pollution and Microclimates: A Case Study of the Taipei Metropolitan Area
Previous Article in Journal

Spatial Pattern and the Process of Settlement Expansion in Jiangsu Province from 1980 to 2010, Eastern China

Jiangsu province consists of 63 cities and counties (Figure 1), with a population of 78.69 million in 2010. The longitude and latitude of its position range from 116°18′E to 121°57′E and from 30°45′N to 35°20′N, respectively. The total area is 102.6 thousand square kilometers. The economic development level in Jiangsu province is among the top ten cities in China. The province also has a perfect location. It lies in the lower reaches of the Yangtze River and the head of the new Eurasian continental bridge. Meanwhile, the most common topography in Jiangsu is plains. The water resources are rich, such as the Yangtze River, Huai River, Jinghang Canal, Tongyu Canal, Taihu Lake, Hongze Lake, Gaoyou Lake, Luoma Lake and Huanghai coast. The climate in Jiangsu province is between the warm temperate zone and the subtropical zone. The percentages of the area of cropland, forestland, grassland, water area, settlement and unused land are 61.42%, 3.00%, 0.90%, 15.20%, 19.27% and 0.21%, respectively. 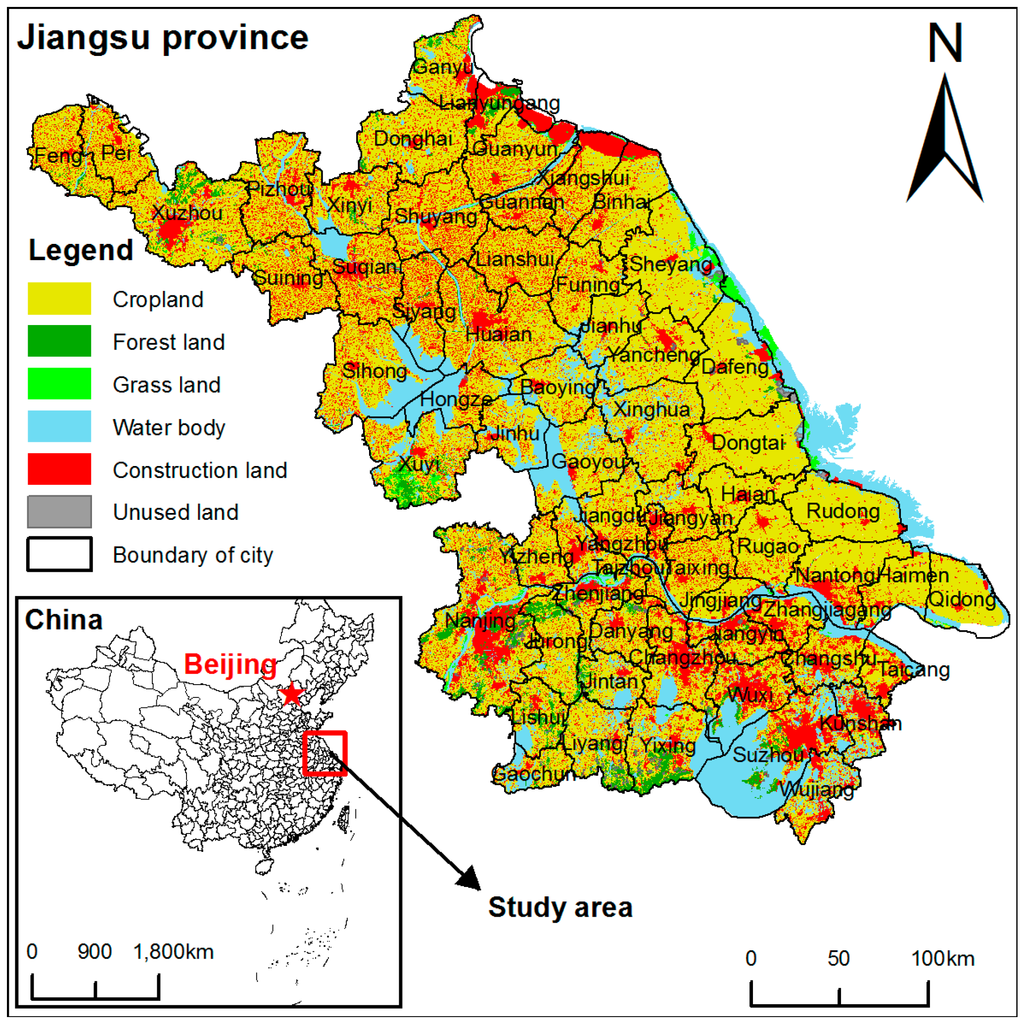 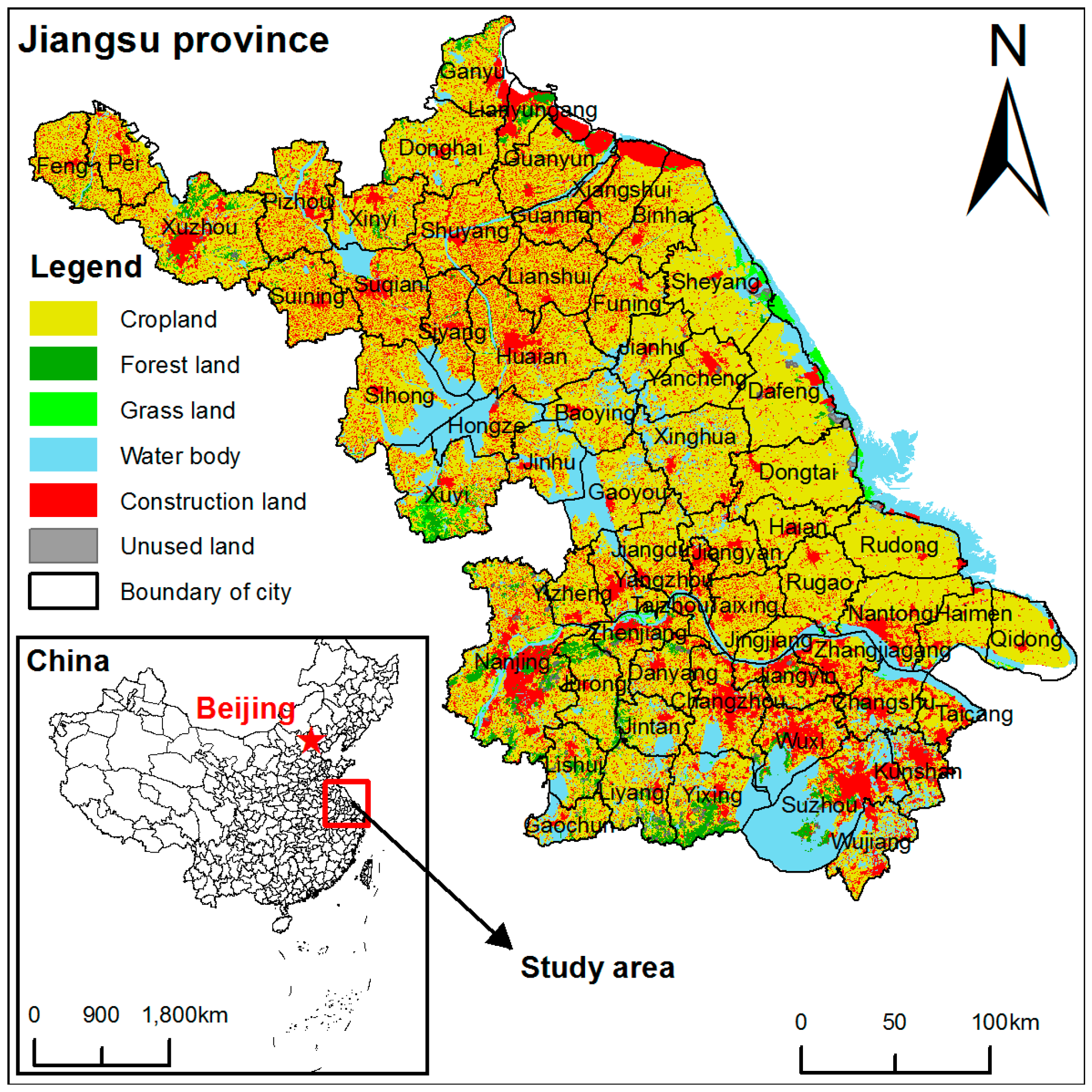 The settlement data of Jiangsu province for the years of 1980, 1995, 2000, 2005 and 2010 came from the National Science and Technology Infrastructure: Data Sharing Infrastructure of Earth System Science. The settlement data were digitized in the ArcGIS 10.2 Desktop (ESRI Inc., Redlands, CA, USA) software based on the TM remote sensing data (30 m × 30 m). The settlements in our paper included urban land and rural residential area. The boundaries of 63 counties were collected from the Department of Land and Resources of Jiangsu Province. The urban and rural settlements were not defined by the population, because of the large population in China, but by the scale of the built-up area in the region. The urban settlement in towns and cities is concentrated within a larger area. The rural settlement in the countryside is scattered.

The settlement expansion intensity index (SEII) of a spatial unit is the proportion of newly increased urban area to its total area [11,40]. It is correlated with the annual growth area and the total area of the spatial unit. The SEII is calculated using the following equation: where SEIIi stands for the settlement expansion intensity index of spatial unit i. SLAt2i and SLAt1i are the area of settlement at time t2 and t1, respectively. TLAi is the total area within the administrative city and county boundary i and ∆t is the study period. 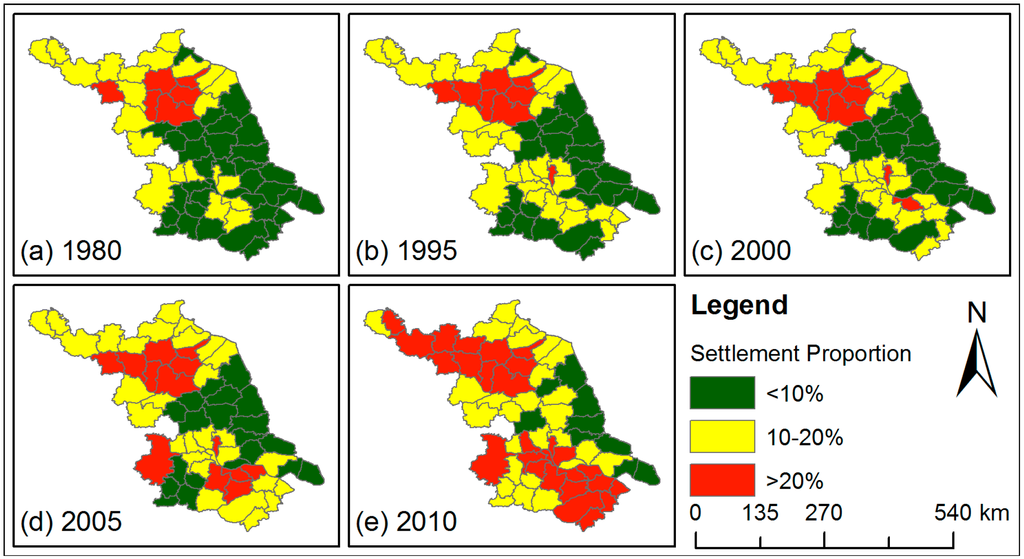 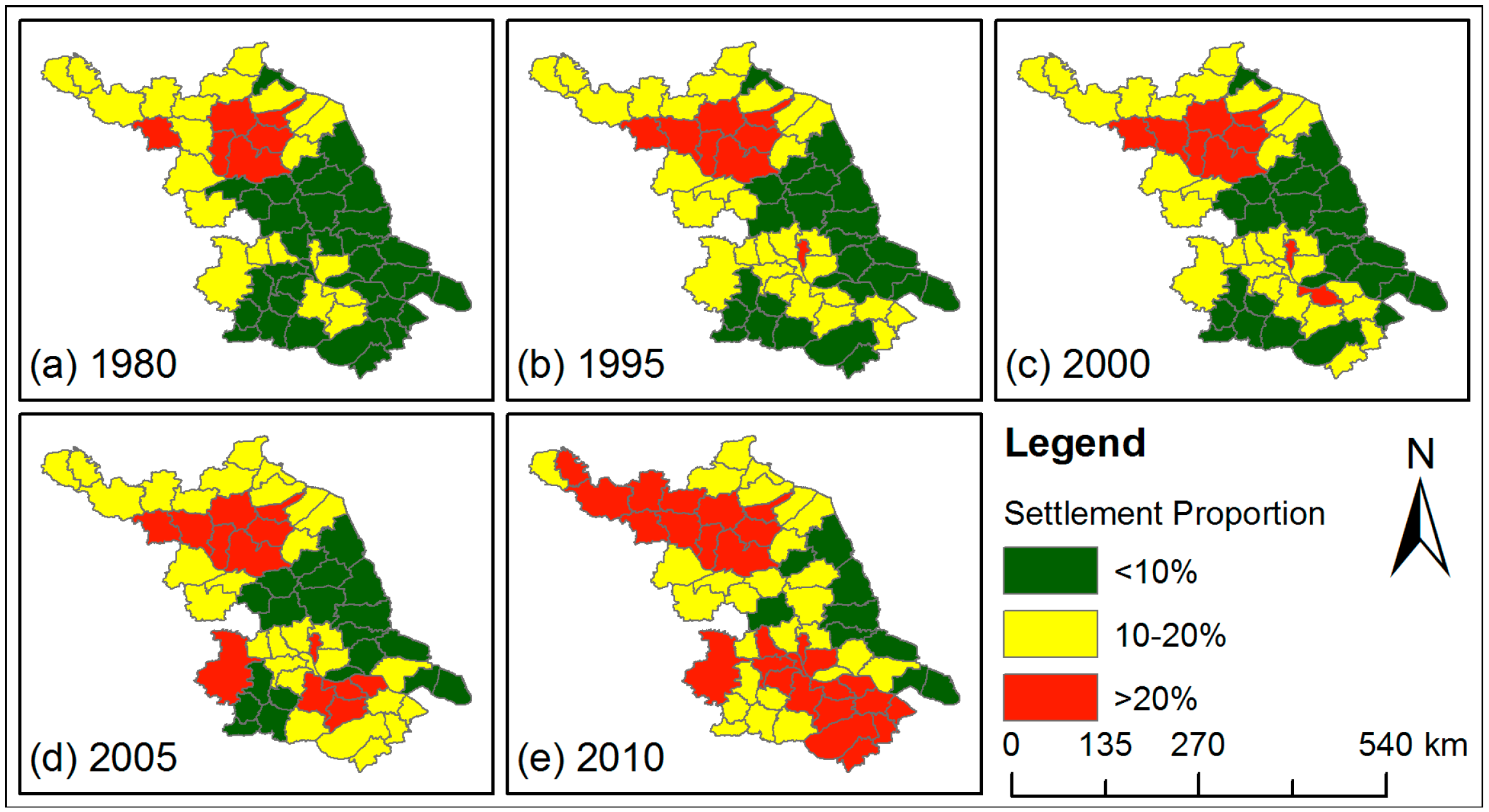 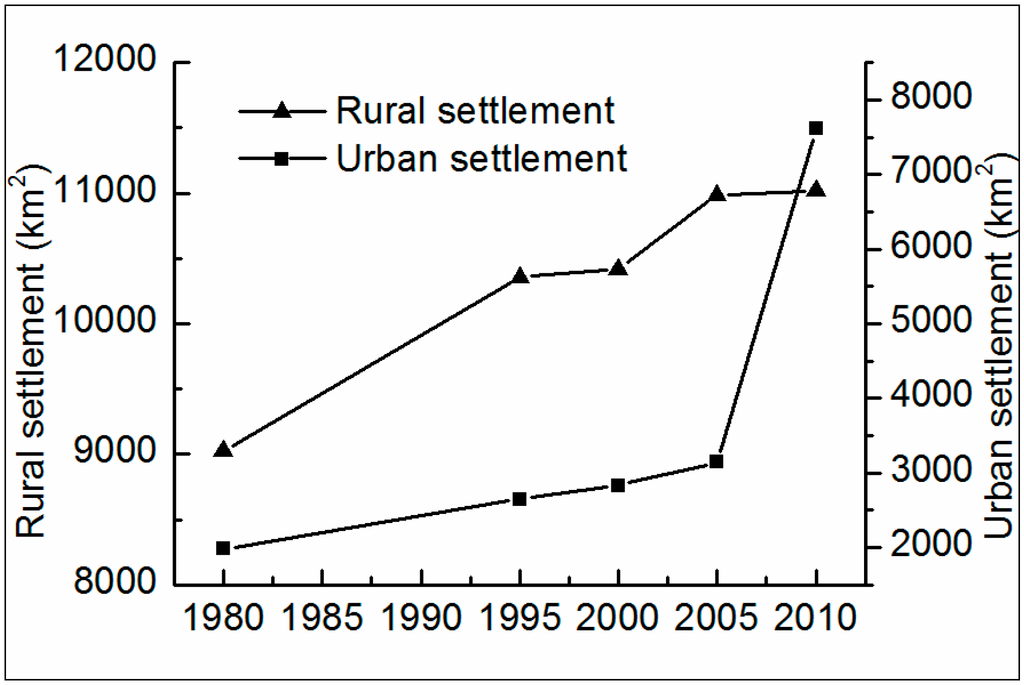 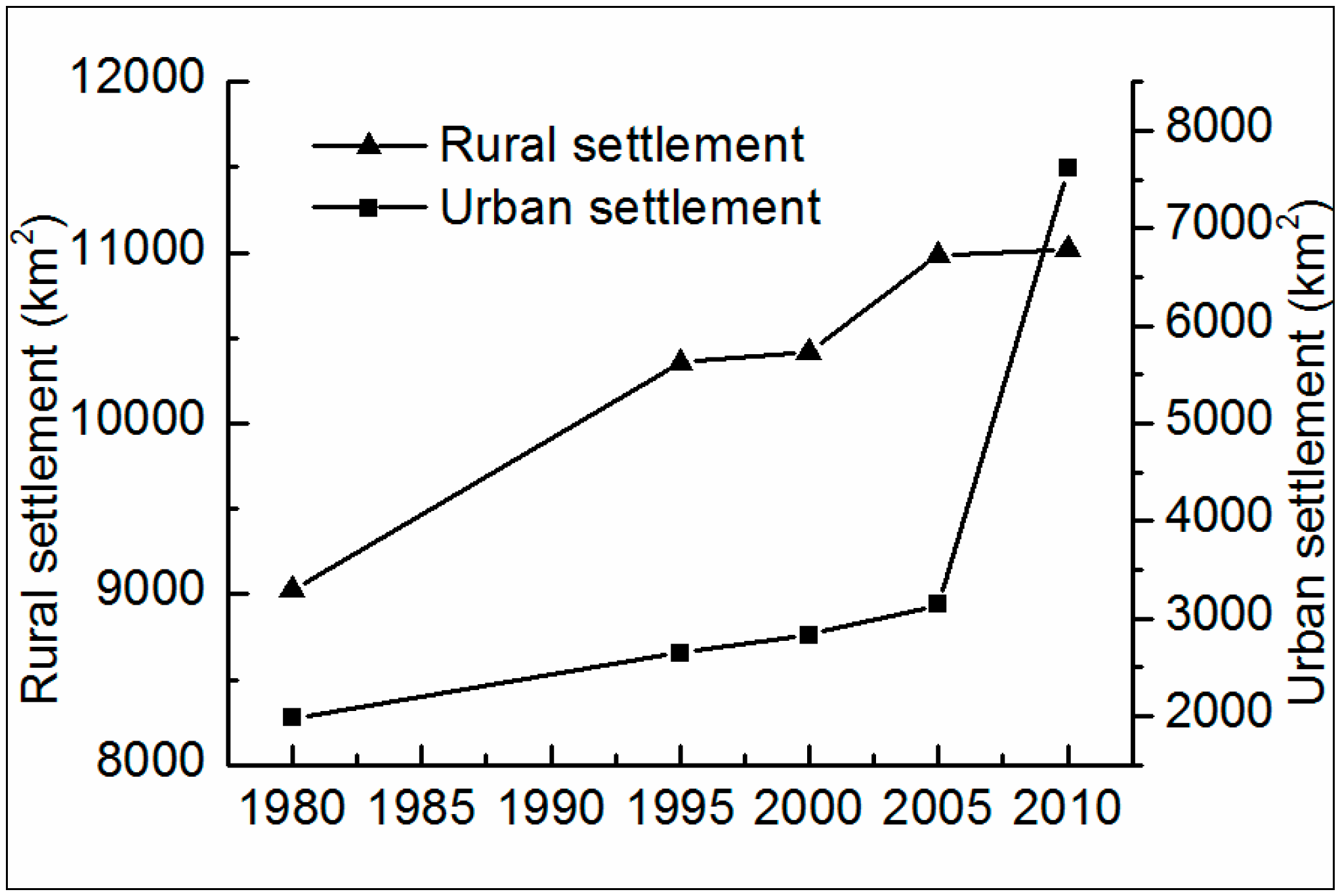 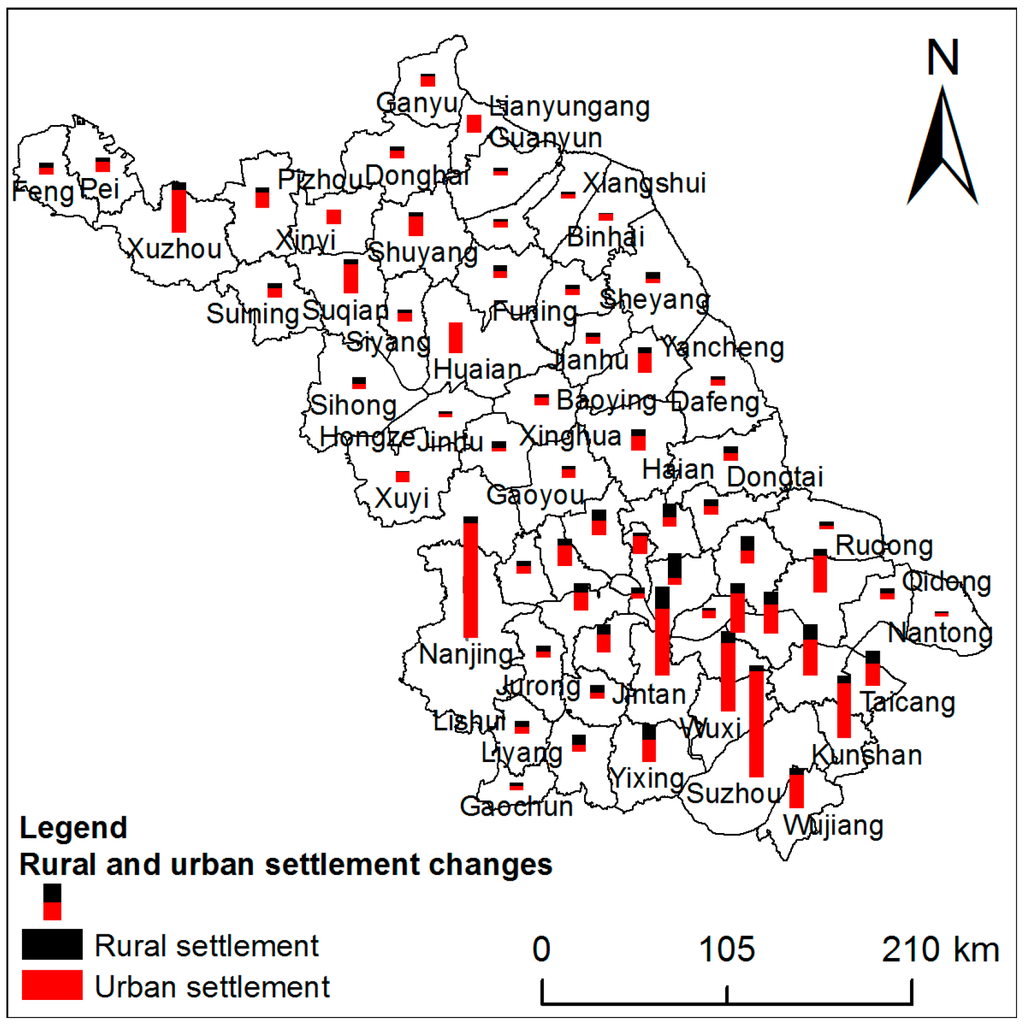 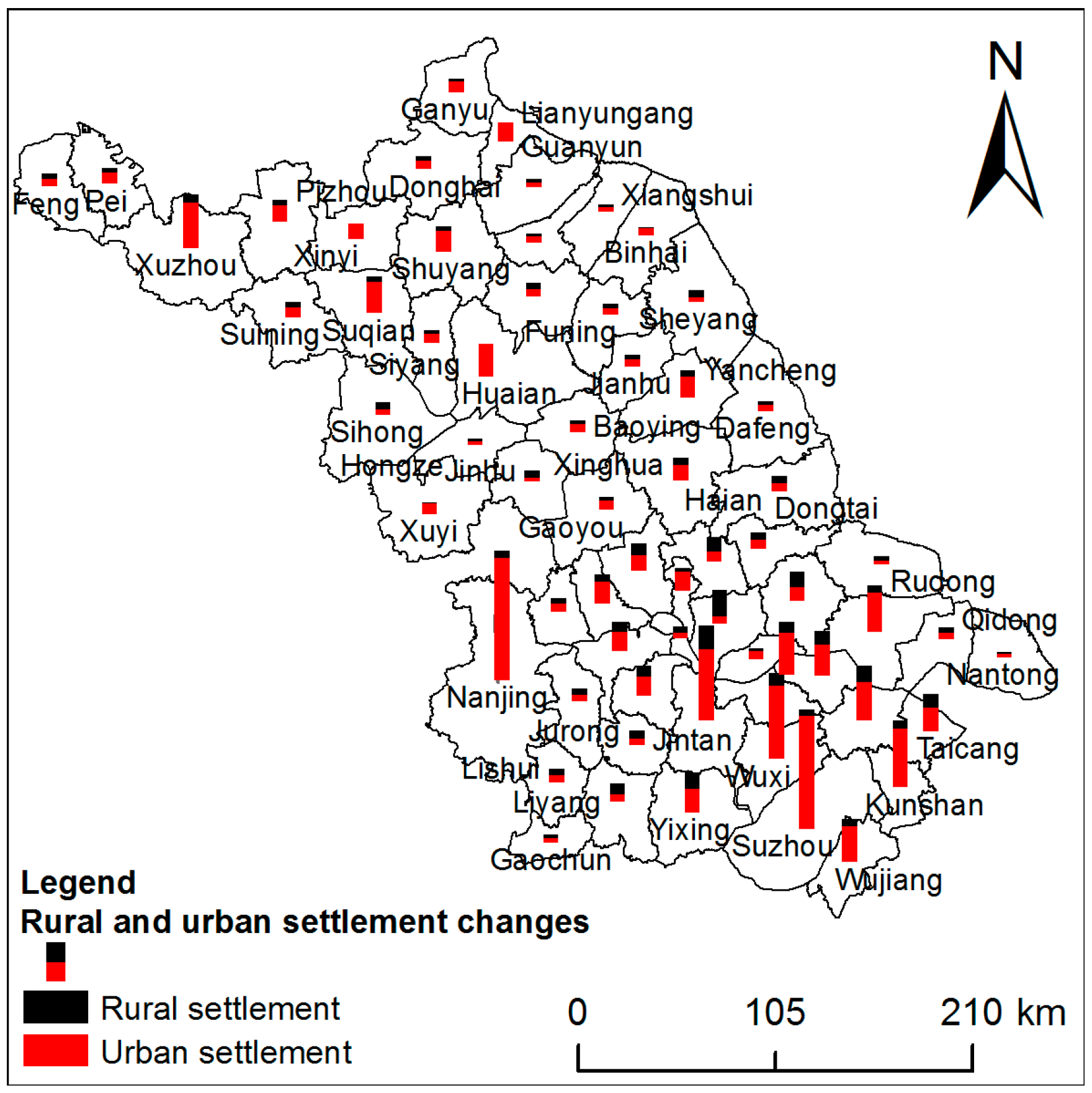 3.3. Settlement Expansion in the Cities of Jiangsu Province 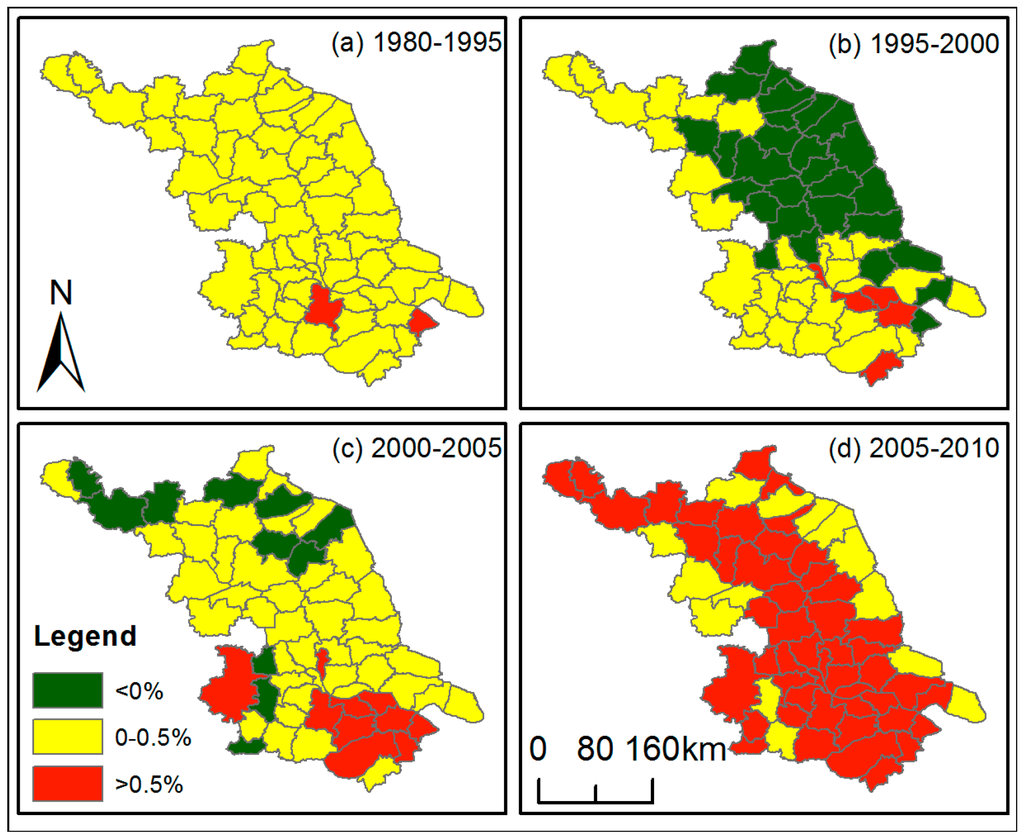 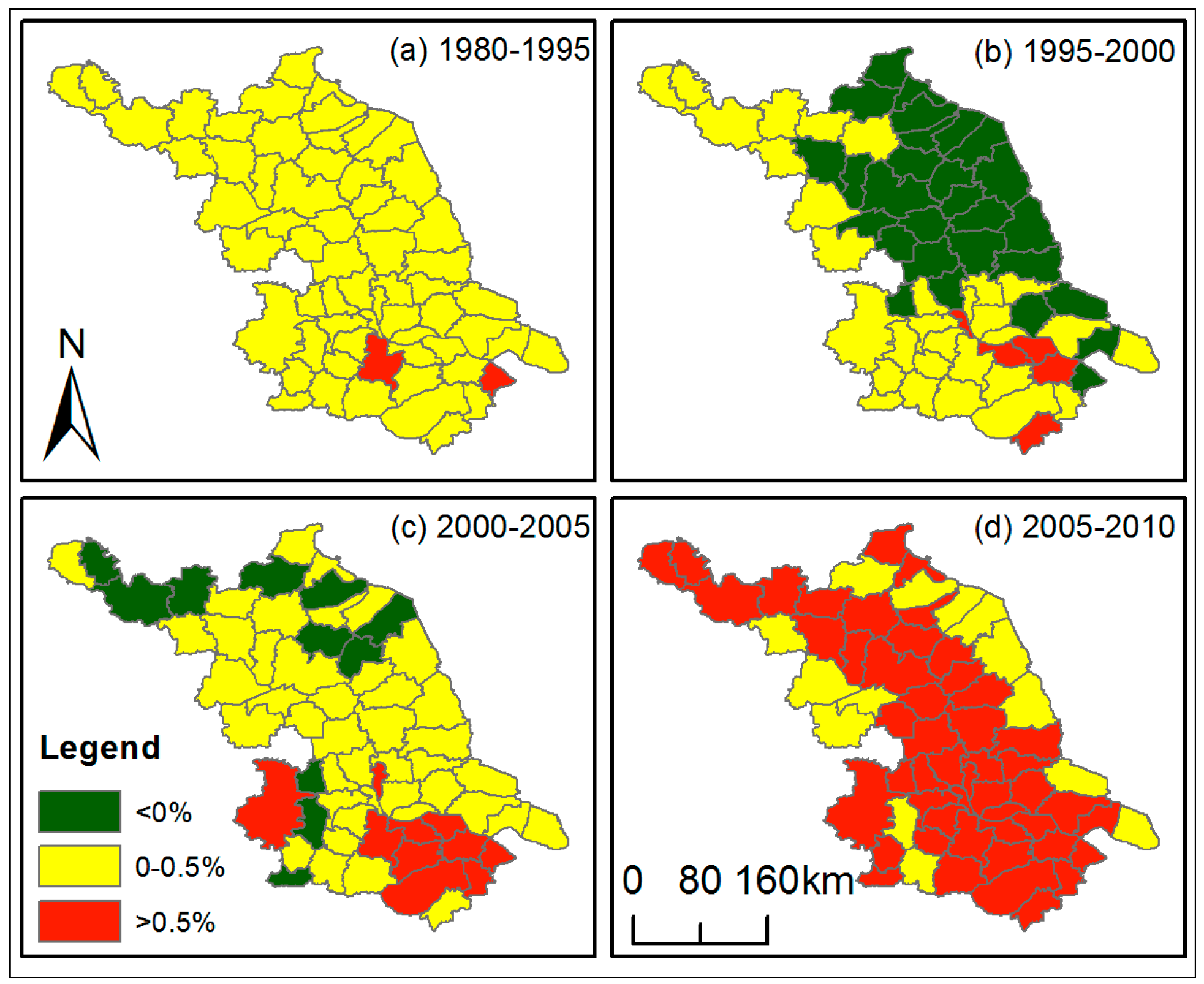 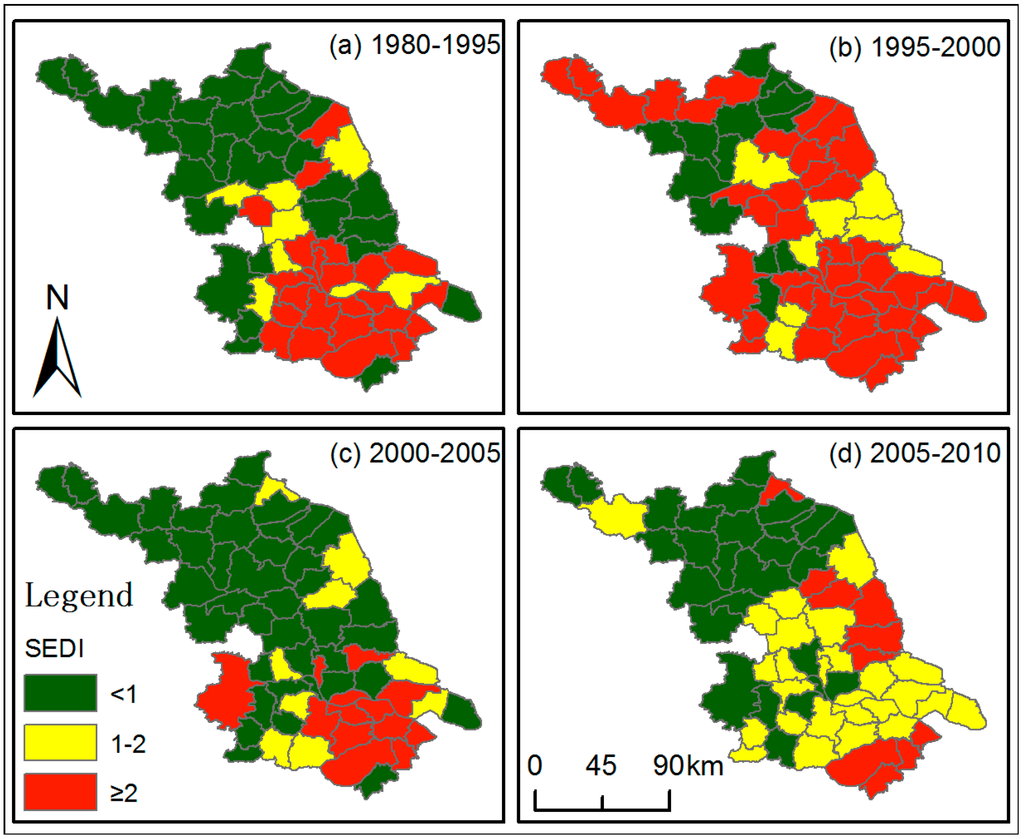 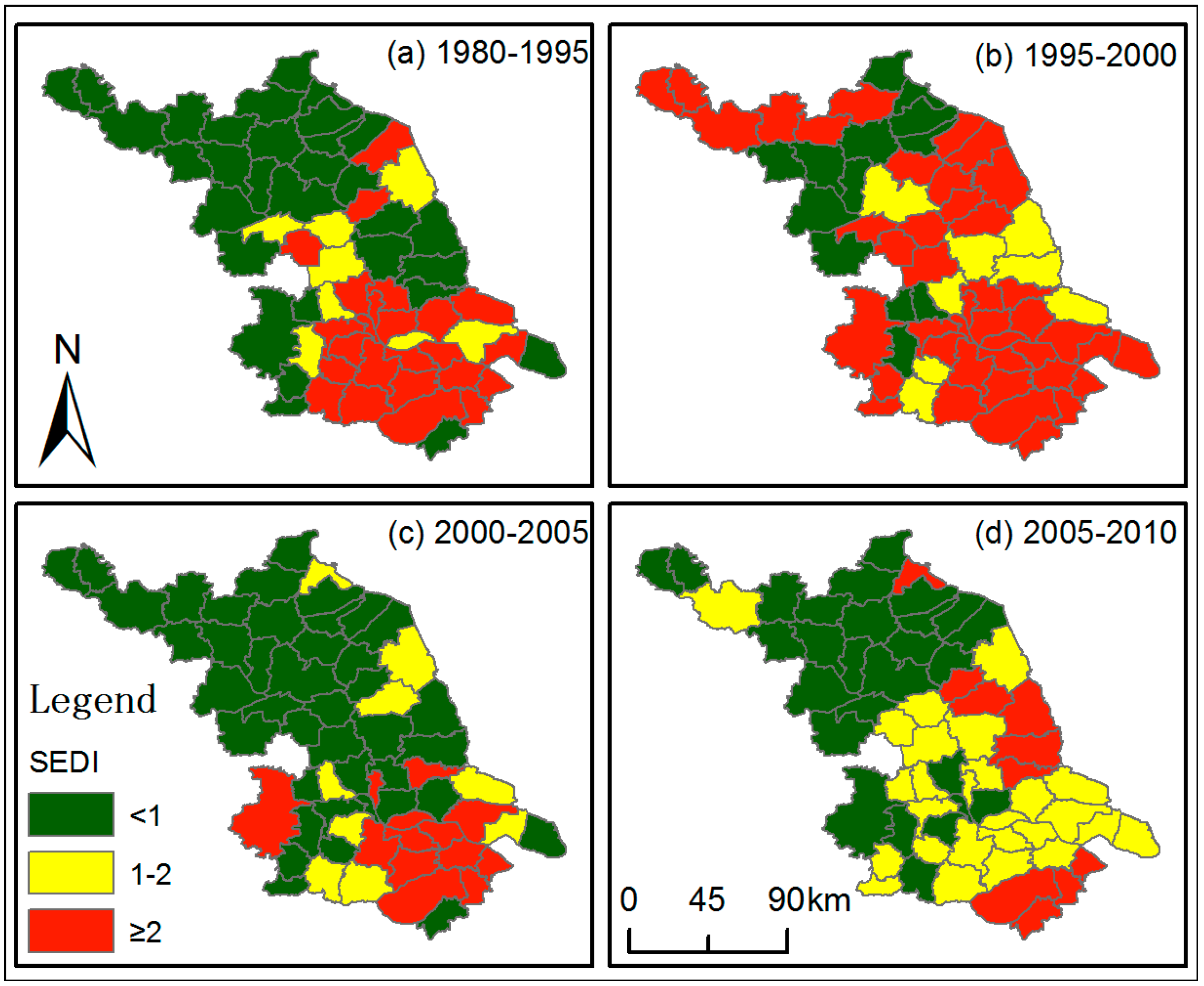 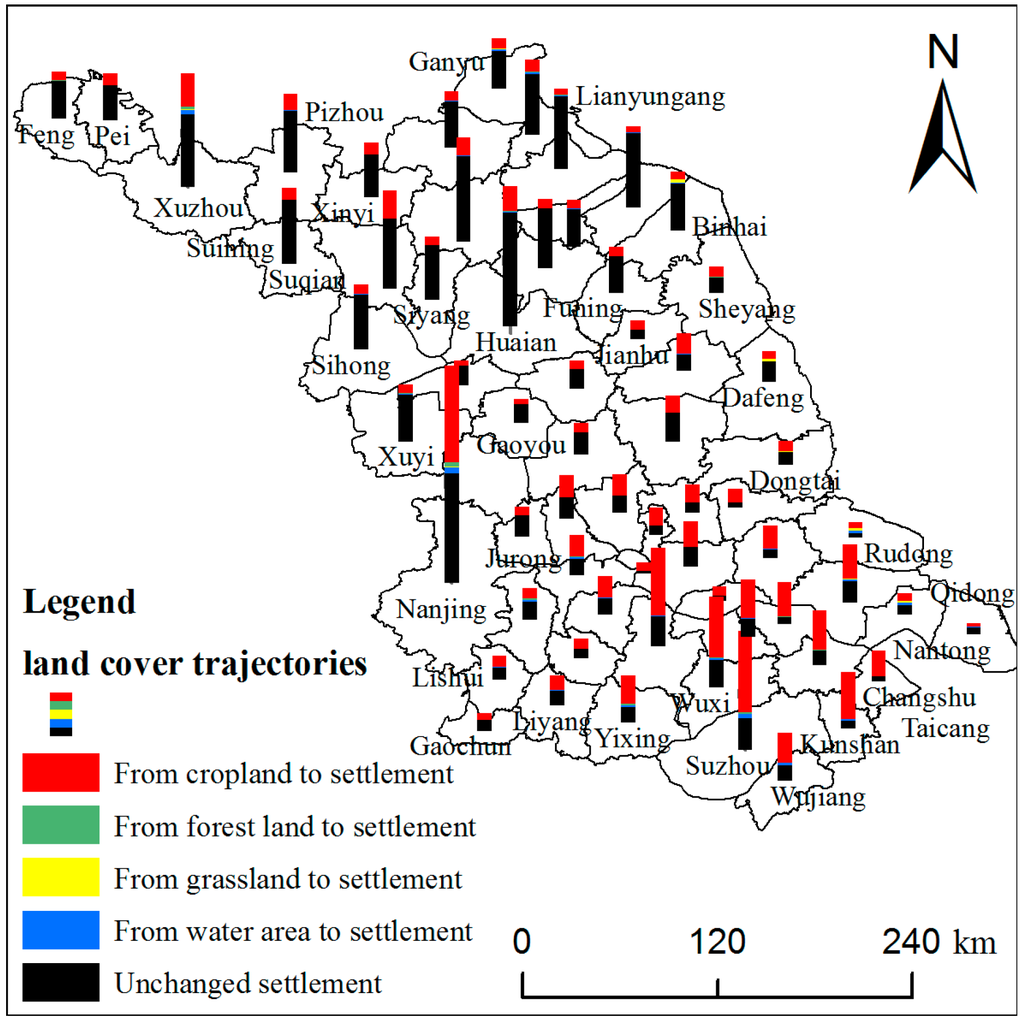 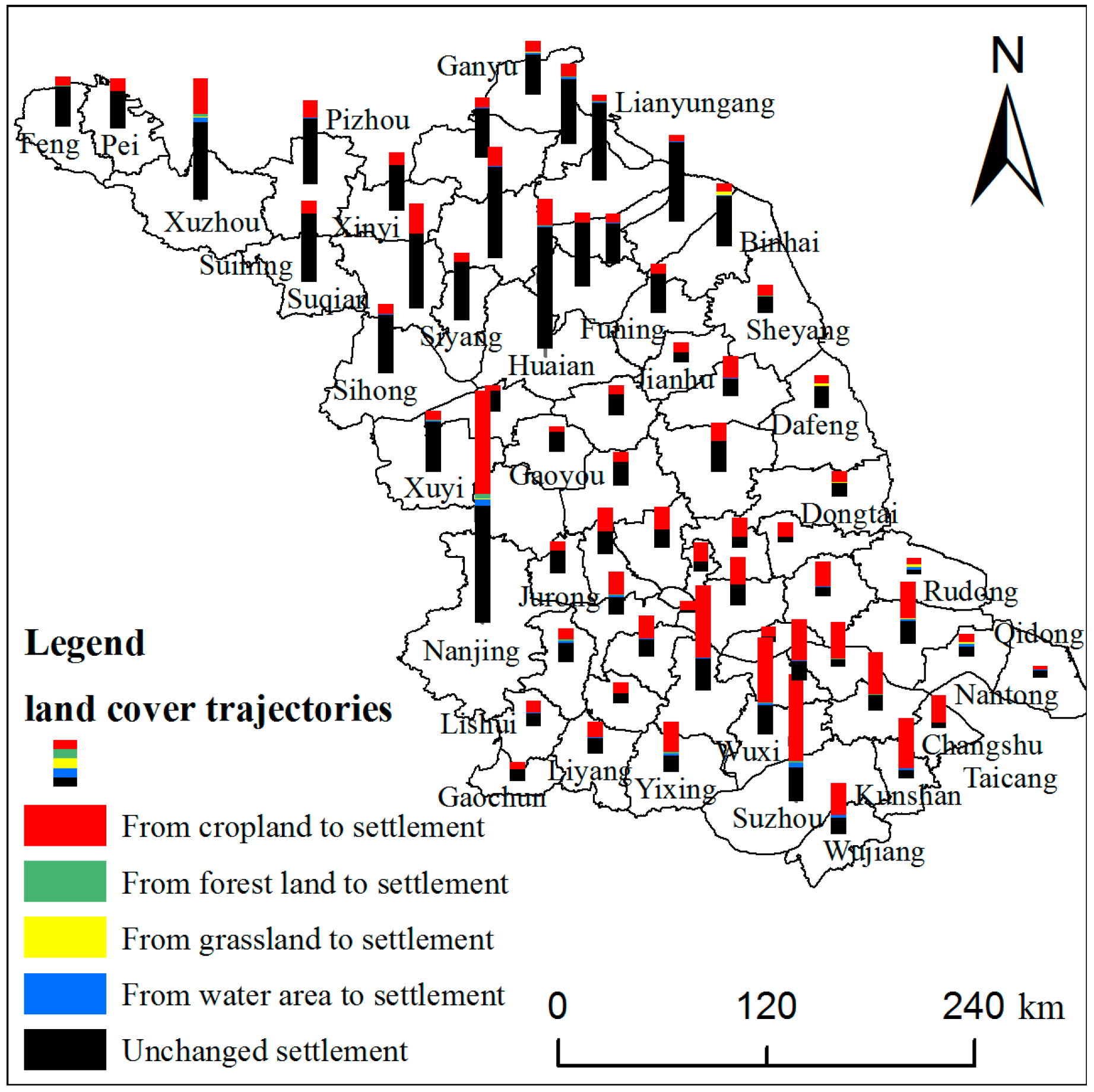 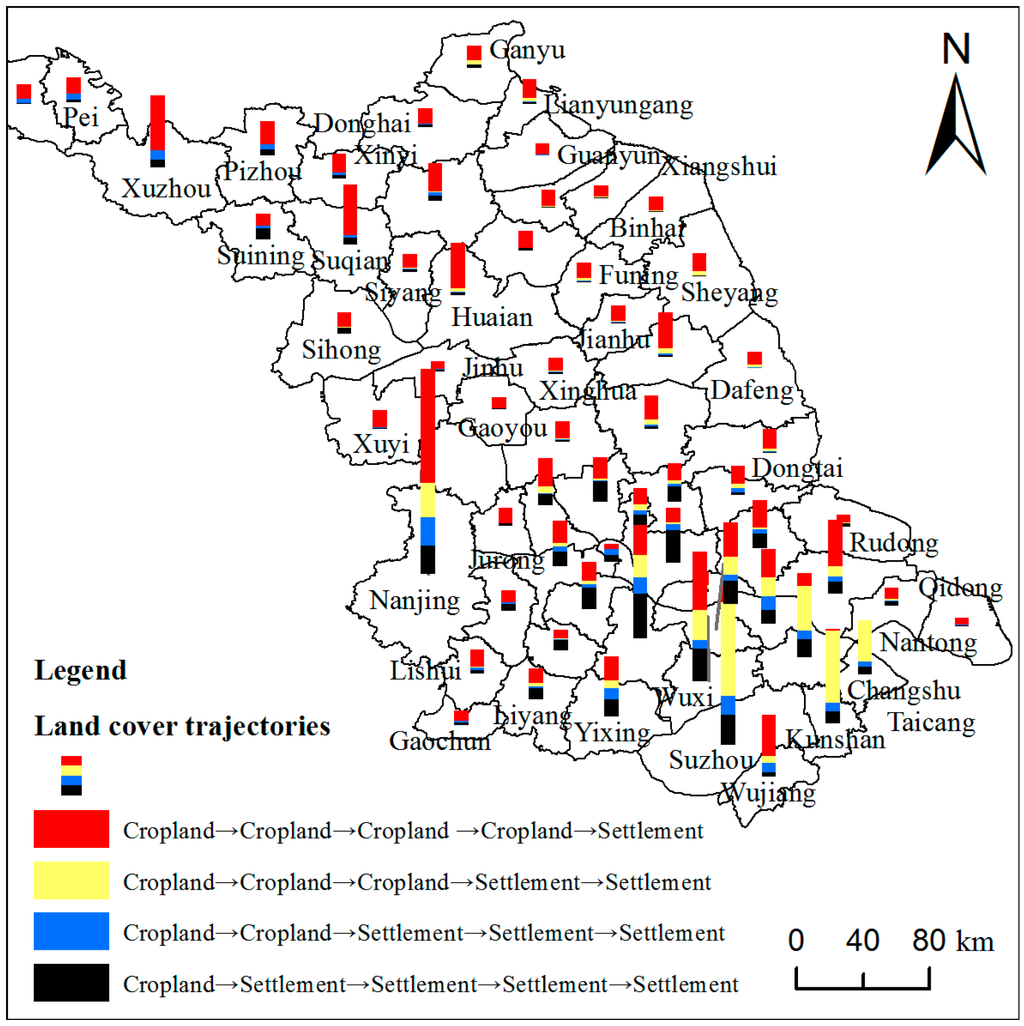 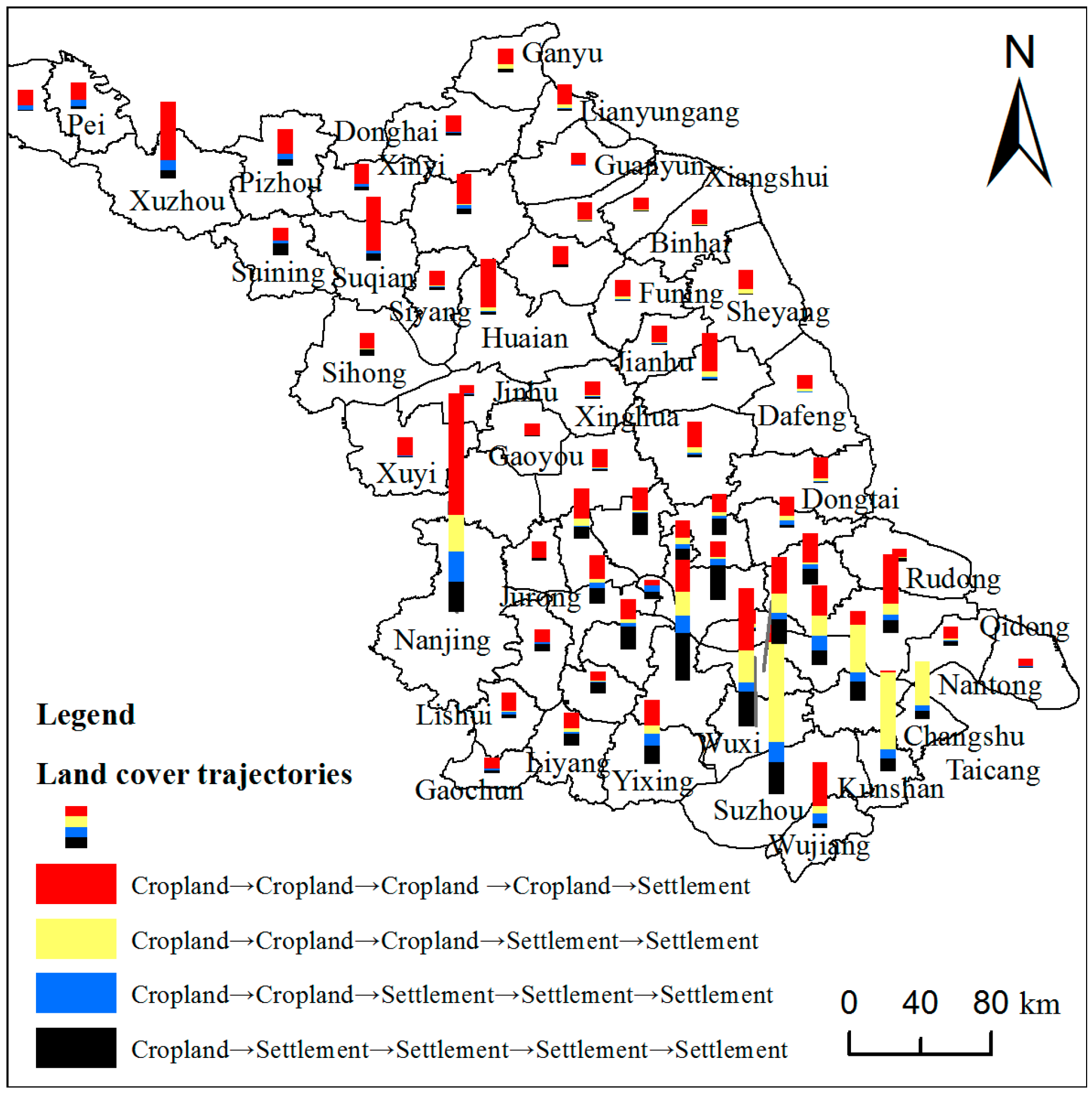 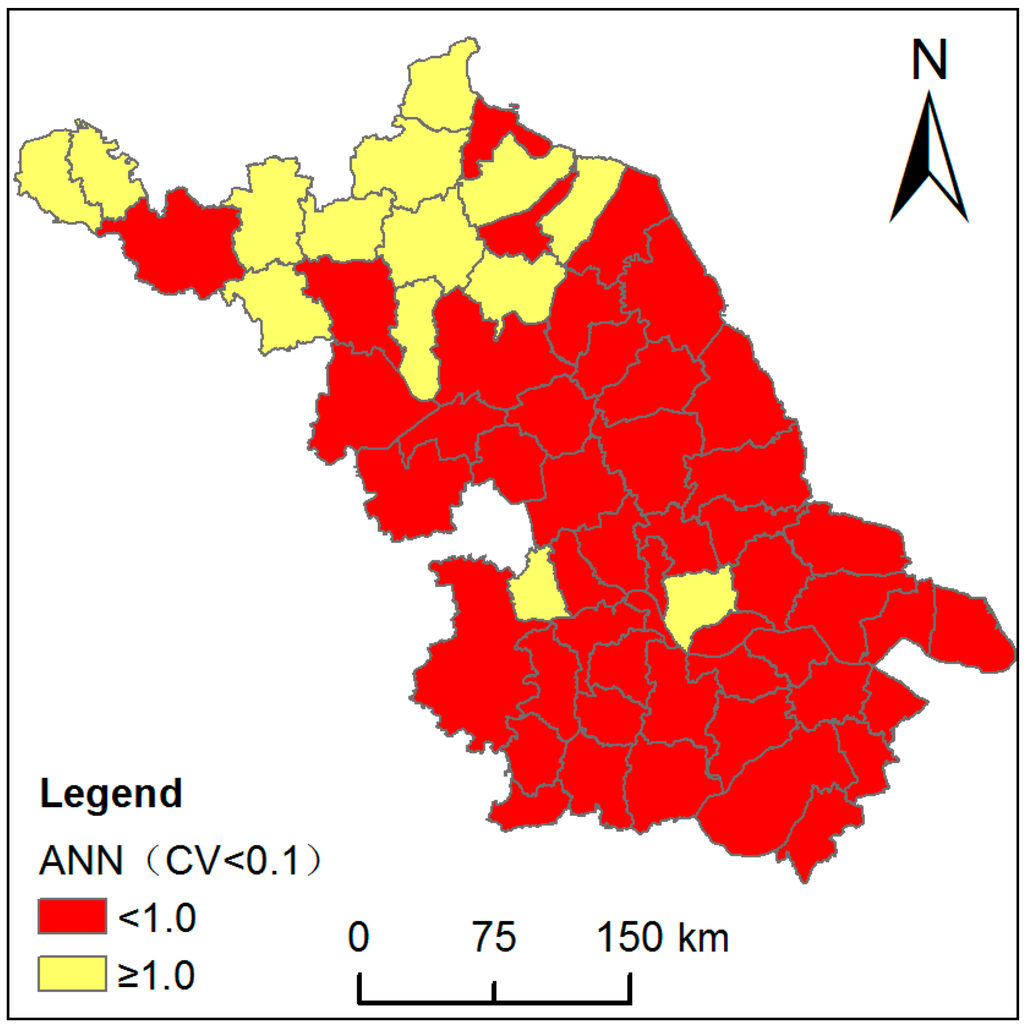 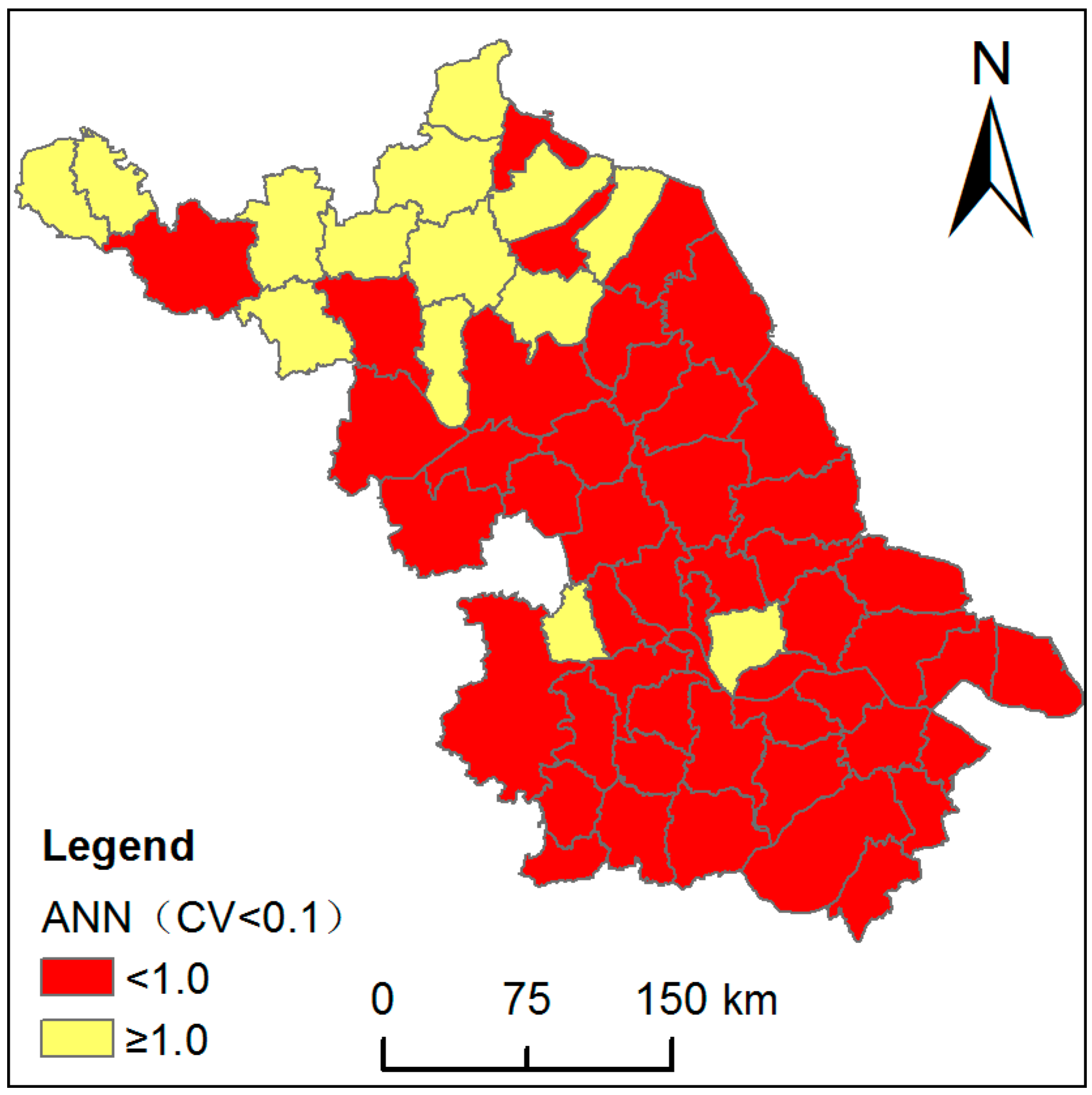 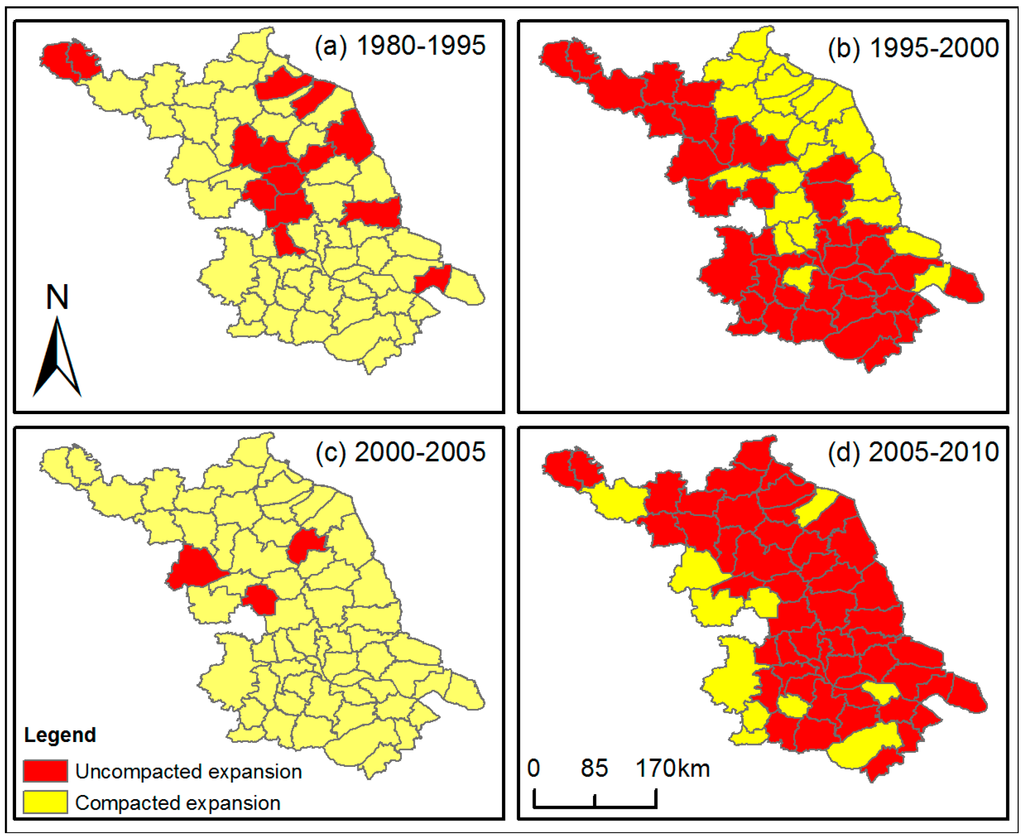 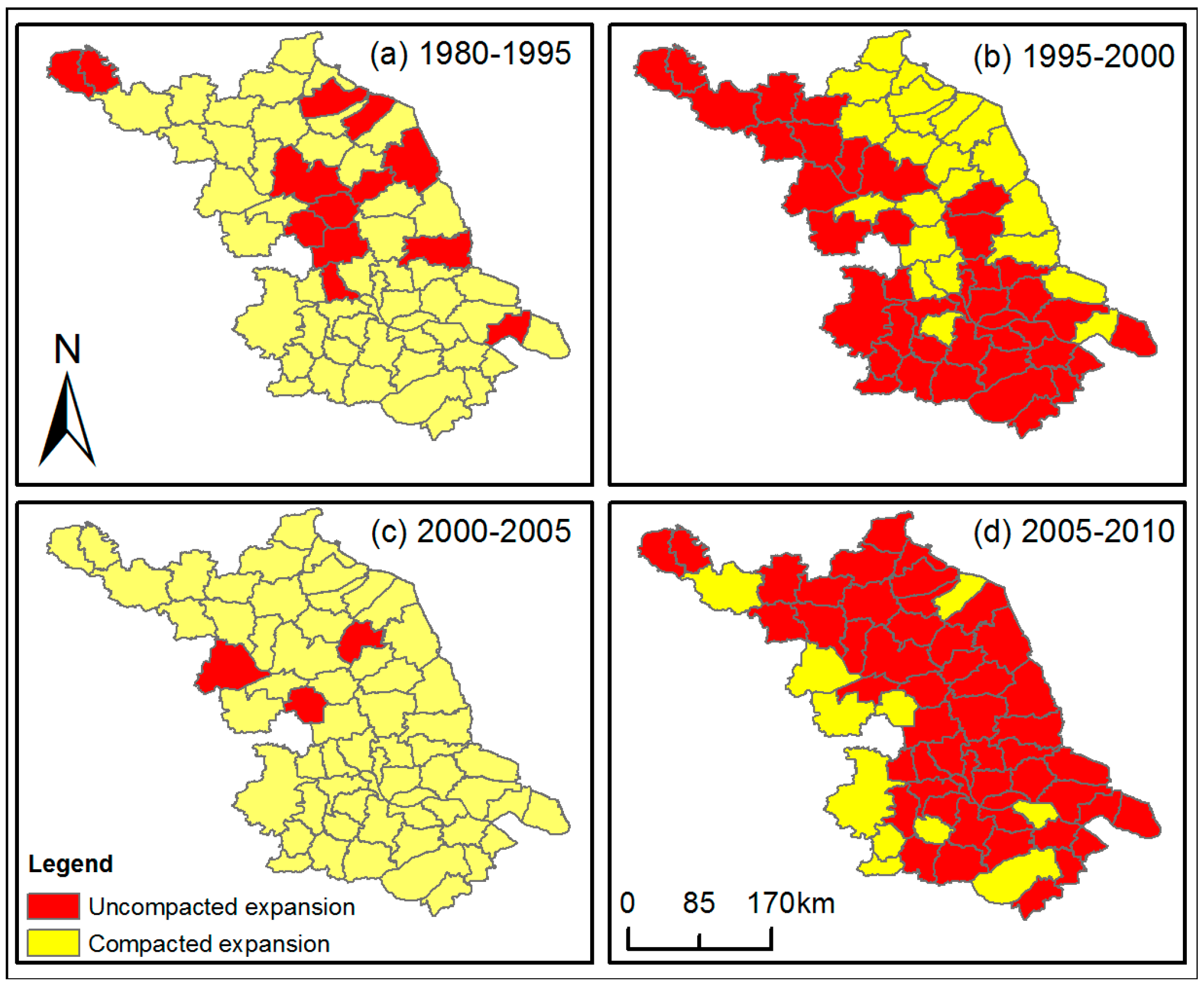 Firstly, we thank the 2014 Asia Global Land Project Conference for suggesting the Sustainability journal. The authors acknowledge Nan Jiang of Nanjing Normal University for providing the remote data. The authors also acknowledge the graduate students, Jianguo Li, Xiaoqing Dai, Fangfang Cai, Xinjian Chen, Xiaohan Wang and Jiangyue Wu. This study was supported by the Project of the Natural Science Foundation of China (No. 41230751, No. 41101547 and No. 40871255), the Scientific Innovation Research of College Graduates in Jiangsu Province (CXLX12-0036), the Program B for Outstanding PhD Candidates of Nanjing University (2014001B010), the National Basic Research and Personnel Training Program (No. J1103408), and the National Science and Technology Support Program (No. 2012BAC01B01). We thank the Rudong County Department of Land and Resources for providing more help with the field sample collection.