Alley Farming in Thailand
Next Article in Special Issue

Urban agriculture offers an alternative land use for integrating multiple functions in densely populated areas. While urban agriculture has historically been an important element of cities in many developing countries, recent concerns about economic and food security have resulted in a growing movement to produce food in cities of developed countries including the United States. In these regions, urban agriculture offers a new frontier for land use planners and landscape designers to become involved in the development and transformation of cities to support community farms, allotment gardens, rooftop gardening, edible landscaping, urban forests, and other productive features of the urban environment. Despite the growing interest in urban agriculture, urban planners and landscape designers are often ill-equipped to integrate food-systems thinking into future plans for cities. The challenge (and opportunity) is to design urban agriculture spaces to be multifunctional, matching the specific needs and preferences of local residents, while also protecting the environment. This paper provides a review of the literature on urban agriculture as it applies to land use planning in the United States. The background includes a brief historical perspective of urban agriculture around the world, as well as more recent examples in the United States. Land use applications are considered for multiple scales, from efforts that consider an entire city, to those that impact a single building or garden. Barriers and constraints to urban agriculture are discussed, followed by research opportunities and methodological approaches that might be used to address them. This work has implications for urban planners, landscape designers, and extension agents, as opportunities to integrate urban agriculture into the fabric of our cities expand. View Full-Text
Keywords: multifunctional landscape; ecosystem services; food systems; sustainable development; urban agriculture multifunctional landscape; ecosystem services; food systems; sustainable development; urban agriculture
►▼ Show Figures 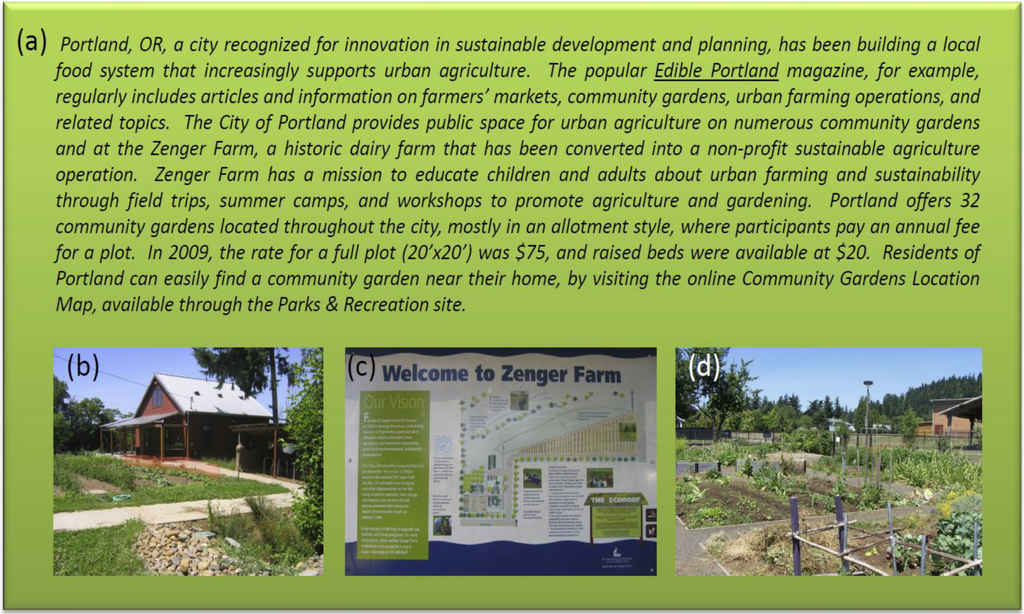