City of Waste—Importance of Scale
Next Article in Special Issue

Food Values, Satisfaction, and Loyalty: Some Evidence in Grocery Retailing Acquired during the COVID-19 Pandemic
Previous Article in Special Issue

:
Urban green infrastructures offer thermal regulation to mitigate urban heat island effects. To gain a better understanding of the cooling ability of transpiring plants at the leaf level, we developed a method to measure the time series of thermal data with a miniaturized, uncalibrated thermal infrared camera. We examined the canopy temperature of four characteristic living wall plants (Heuchera x cultorum, Bergenia cordifolia, Geranium sanguineum, and Brunnera macrophylla) under increasing drought stress and compared them with a well-watered control group. The method proved suitable to evaluate differences in canopy temperature between the different treatments. Leaf temperatures of water-stressed plants were 6 to 8 °C higher than those well-watered, with differences among species. In order to cool through transpiration, vegetation in green infrastructures must be sufficiently supplied with water. Thermal cameras were found to be useful to monitor vertical greening because leaf surface temperature is closely related to drought stress. The usage of thermal cameras mounted on unmanned aerial vehicles could be a rapid and easy monitoring system to cover large façades.
Keywords:
urban green infrastructure; plant water stress; uncalibrated thermal camera; cooling potential; urban heat island; monitoring

Data for the study were collected in a greenhouse experiment by testing four different species commonly used in LWS. After an initial acclimatization of 21 days, half of the plants continued to be well-watered, while irrigation was stopped for the other half. We continuously recorded thermal data of the plant canopy until water-stressed plants had withered (leaves turned brown).

On 8 April 2019, ten specimens each of Brunnera macrophylla, Geranium sanguineum, Bergenia cordifolia, and Heuchera x cultorum were precultivated in 11 × 11 cm pots with 1.0 L of substrate (Stender C200; Schermbeck, Germany) for 21 days in a greenhouse at the University of Natural Resources and Life Sciences, Vienna (Austria). During this period, we irrigated each pot twice a day (9 a.m. and 6 p.m.) with 150 mL in each irrigation run. To maintain 100% water holding capacity (WHC), pressure-compensated drip hoses with a flow rate of 4 L/h (DeltaTM Drp Spike PC; Trani, Italy) were used. After acclimatization until 29 April 2019, we evenly divided the plants into water-stressed pots that were no longer irrigated and a control group kept at 100% WHC (Figure 1). With these irrigation settings, we monitored the plants until those under water stress had withered, which took between 18 and 27 days depending on the species.

Thermal images of the plants were recorded every minute, starting on 25 April 2019 until 26 May 2019 with a Vue Pro 640 (FLIR Systems, Inc.; Wilsonville, Oregon, USA) at a distance of 1.5 m above the plants (Figure 1). Recordings were saved as 14-bit tiffs with a resolution of 640 × 512 pixels without postprocessing. We then created shapefiles with the software ArcGIS (Version 10.2 Esri; Redlands, CA, USA) containing polygons covering the five plants per species and treatment (Figure 2). Because the position of the plants changed slightly, mainly due to growth, the polygons were adjusted daily.
We extracted the radiometric values (DN) with the software RStudio (Version 1.1.463 R Studio, Boston, Massachusetts, USA) from each pixel within the polygons and calculated the median and the 97.5 percentile [41]. Because the differences between the treatments were clearer with the 97.5 percentile, we subsequently used these data. Extracted time series data then were smoothed using the Whittaker–Henderson approach with lambda 1600 and d = 1 using the R Studio package pracma [42,43]. For the transformation from raw digital numbers (DN) recorded by the thermal camera into degrees Celsius, we used the equation:
T [°C] = DN × 0.04 − 303.72
following the linear model of Kelly [38] for an ambient air temperature of 10 °C. This model requires calibration for different temperatures, and the values for the plant canopy temperature therefore do not represent absolute temperature values [44]. We thus used the temperature differences (∆T in °C) between the canopy temperatures of the stressed (TS) and the nonstressed (TNS) plants.

On Days 4, 9, 14, 17, 21, and 24 after the end of the acclimatization phase, leaf stomatal conductance was measured between 11:00 and 13:00 on one fully developed marked leaf of each plant (five plants per treatment, four species, two treatments), with a leaf porometer (AP-4, Delta-T Devices; Cambridge, UK). Time series of stomatal conductivity were analyzed with a two-way repeated-measures ANOVA using 5% as the level of significance with the rstatix package (Version 0.6.0) [45]. The normal distribution of the residuals was verified visually with Q-Q plots. Assumption of sphericity was controlled with Mauchly’s test of sphericity. We performed a paired t-test to find differences between gs and water treatments at the time of measurement using the Bonferroni correction.

Figure 3 shows TS, TNS, and ∆T, as well as air temperature and radiation, in Brunnera before drought stress (27 to 30 April, Figure 3a,c) and 9 to 11 May after water was withheld from the stress treatment (Figure 3b,d). When all plants were equally irrigated, TS and TNS were nearly identical, with a mean and maximal ∆T of 0.2 and 0.7 °C, respectively. Leaf temperatures were lowest during hours of maximum air temperature and radiation.
Ten days after the last irrigation (9 May), the ∆T (Figure 3d) reached a maximum of 1 °C. On this day, air temperature and radiation were low. During the subsequent days, the two curves diverged and the temperature differences rose to 5.4 °C. Leaf temperatures during daylight were still slightly lower than during the night, and the maximum ∆T was around noon when air temperature and radiation were also highest. At night, the two curves converged again and the temperature differences did not exceed 1°C, even when one treatment was water-stressed.
Leaf surface temperatures of Geranium, Bergenia, and Heuchera followed a similar pattern. We selected three time windows, the first within the acclimatization phase from 27 April to 30 April, the second under moderate stress (9 May to 11 May), and the third with peak stress from 16 May to 19 May. The mean difference in leaf surface temperatures during the acclimatization period was 0.2 °C for Geranium, 0.3 °C for Bergenia, and 0.3 °C for Heuchera between the two groups during the acclimatization phase (Figure 4). The maximal short-term temperature difference during this period was 1.6 °C in Heuchera.
Ten days after the last irrigation of the stress group (9 May), the maximum ∆T was 2.2 °C in Geranium, 2.0 °C in Bergenia, and 3.1 °C in Heuchera. The next day, the temperature differences rose to 6.7, 5.7, and 6.5 °C for Geranium, Bergenia, and Heuchera, respectively. At this point, the water stress started to become visible in the species Brunnera, which had individual wilting leaves. Among the other species, there was no stress indication observable, but temperatures of stressed leaves were clearly higher than in the control plants. On 13 May, 14 days after irrigation stopped, water stress symptoms were visible on all plants. After 18 days, the leaves of Brunnera were completely withered, at which time the images can no longer be used as TC because the camera recorded mostly the soil in the pots. The highest ∆T before plants wilted were 6.1 °C in Brunnera, 8.2 °C in Geranium, 7.4 °C in Bergenia, and 6.5 °C in Heuchera, always around solar noon. During the night, water stress was not visible in the TIR, and TNS and TS hardly differed.

The two-way ANOVA revealed a significant interaction between treatment (water-stressed and control) and time. We, therefore, analyzed the effect of the treatment for each measurement day. On 3 May, five days after the last irrigation of the stress group, gs of control and water-stressed Brunnera (276 vs. 221 mmol/m2/s) and Bergenia (228 vs. 200 mmol/m2/s) did not differ significantly (Figure 5). In Geranium (329 vs. 112 mmol/m²/s) and Heuchera (199 vs. 66 mmol/m2/s), gs of drought-stressed plants were significantly lower than in control plants. Depending on the species, drought stress was visible early through stomatal conductance, this effect increases with time. Nine days after irrigation stopped (9 May), gs was significantly lower in all stressed plants as stomata were responding to drought stress in all species. Geranium and Heuchera responded faster than Brunnera and Bergenia. The reduced transpiration as a consequence of lower gs caused the leaf surface temperature to increase under the influence of solar radiation.

Based on our findings and the comprehensive literature, we conclude that for urban green infrastructure (GI) to fulfill appropriate cooling functions, the plants used must be adequately supplied with water. These findings contribute to the understanding of the quantification of the cooling effects of plants in GIs and provide a basis for further research. The method used to quantify temporal temperature developments is promising for further investigations to advance detailed monitoring and exploration of urban GI in terms of urban ecosystems and the services they rely on. Especially the use of UAVs could complement ground-based manual inspections and therefore may be useful tools for monitoring the status of GI in cities. To detect drought stress, we recommend monitoring on sunny days around noon when solar radiation is highest and when the effect of drought stress is seen most clearly.

Many thanks to Gerhard Wagner for making the glass house available, to Max Kampen and Stefan Lederbauer for the support with the measurements, Bernhard Spangl for statistical support, Pia Minixhofer and Bernhard Kastner for proofreading. 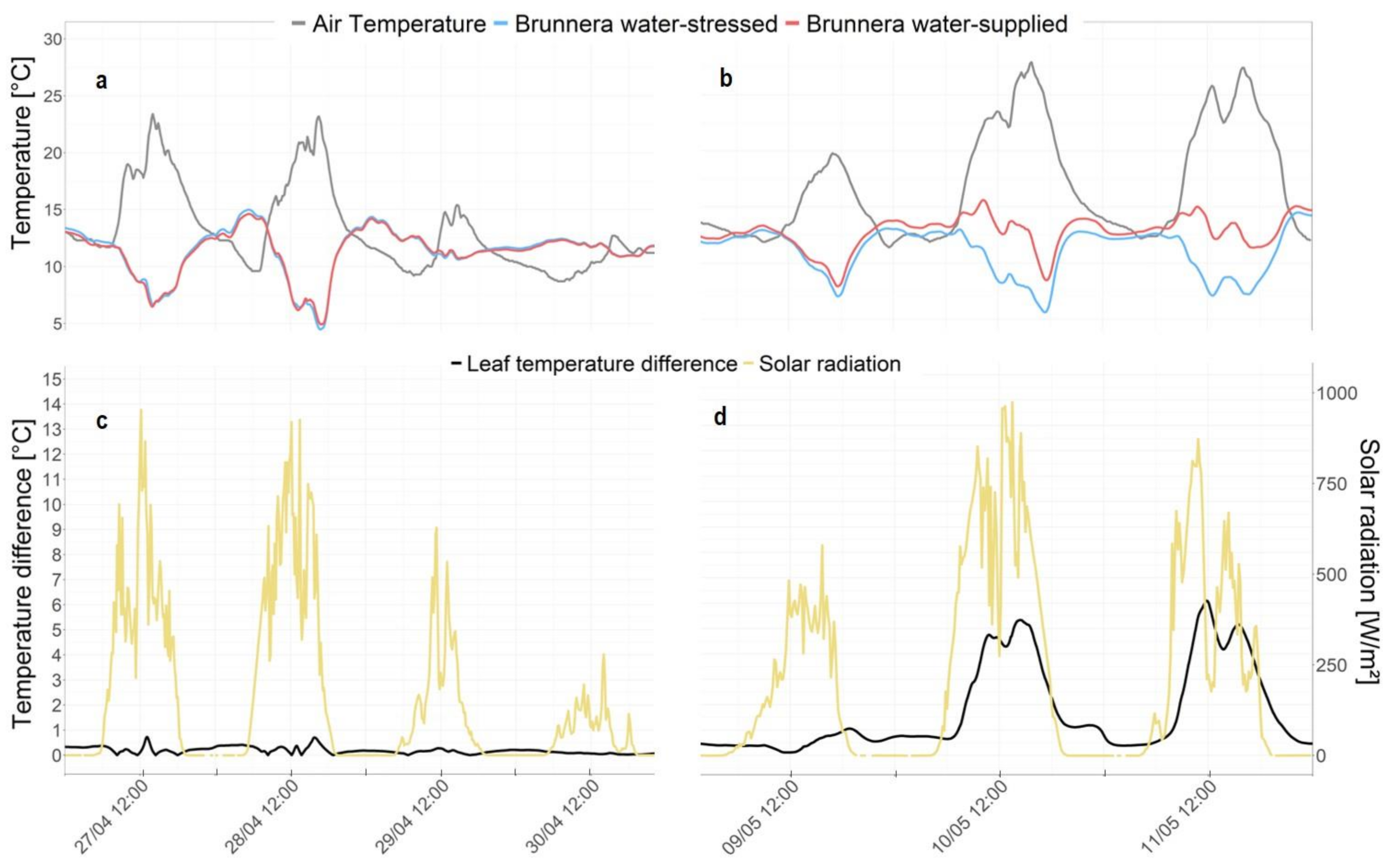 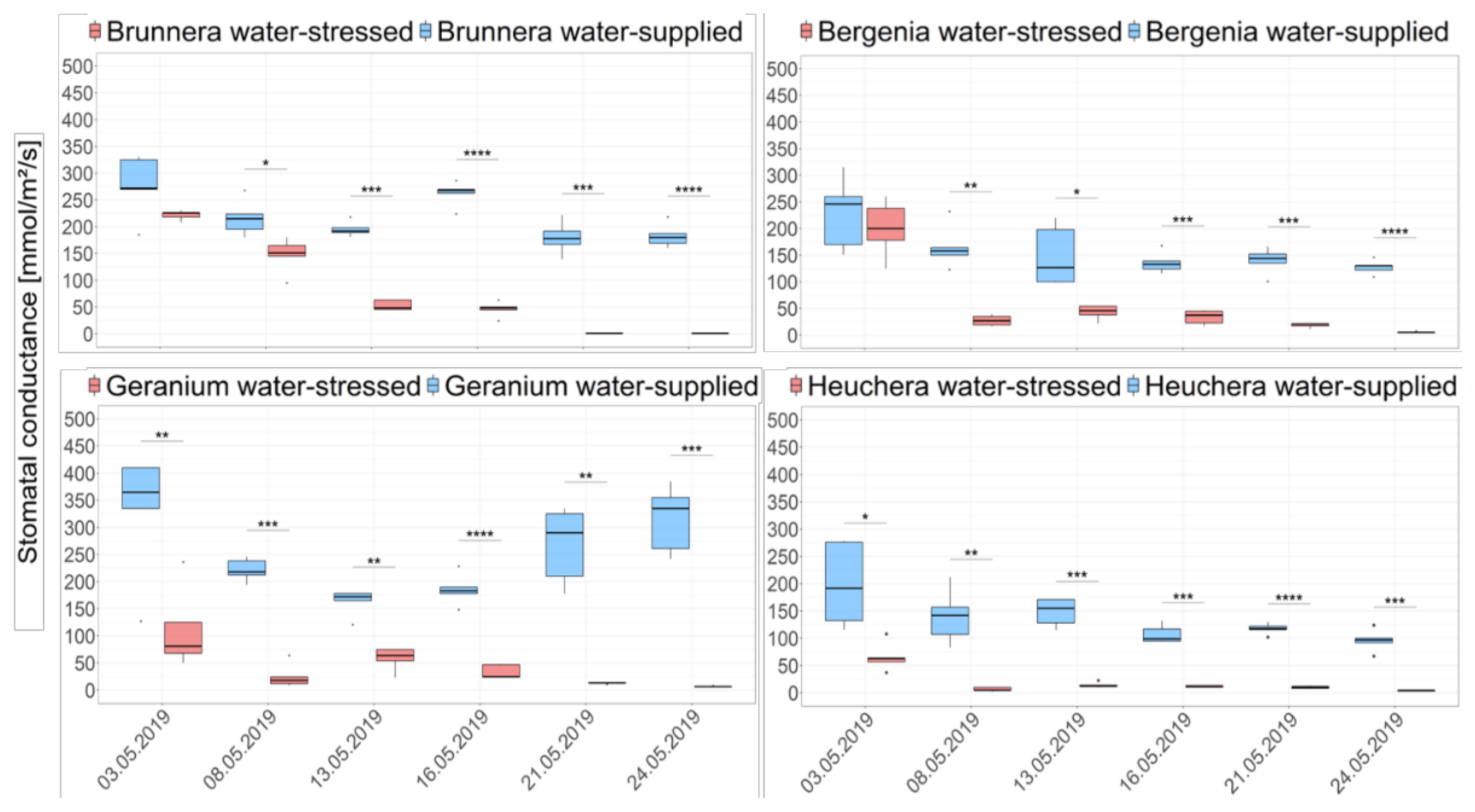