The Employees’ State of Mind during COVID-19: A Self-Determination Theory Perspective
Previous Article in Journal

The Risk of the Population in a Changing Climate over the Tibetan Plateau, China: Integrating Hazard, Population Exposure and Vulnerability

As the “Third Pole” of the Earth, the Tibetan Plateau (TP) has been warming significantly, and the instability of extreme events related to climate and weather has enhanced exceptionally in recent decades. These changes have posed increasingly severe impacts on the population over the TP. So far, however, the impacts on the population have not been assessed systematically and comprehensively from the perspective of risk. In this paper, the hazard of climate change was assessed from a fresh look, not only considering extreme changes of air temperature, precipitation, and wind speed, but also their changes in mean and fluctuation, using daily meteorological data from 1961–2015. The population exposure and vulnerability to climate change were then evaluated using demographic data and considering population scale and structure. Finally, the population risk over the TP to climate change was quantitatively assessed within the framework of the Intergovernmental Panel on Climate Change (IPCC). The results showed that the climate change hazard was mainly at medium and heavy levels, in areas accounting for 64.60% of the total. The population exposure was relatively low; the land area at slight and light levels accounted for 83.94%, but high in the eastern edge area of the TP. The population vulnerability was mostly at medium and heavy levels, and the non-agricultural population rate was the key factor affecting the population vulnerability. Generally, the overall population risk over the TP was not very high: the number of counties with heavy and very heavy risk only accounted for 24.29%, and land area was less than 5%. However, more than 40% of the population was in high-risk areas, located in the eastern edge area of the TP. Population exposure was the decisive factor of the population risk to climate change, and high population exposure might lead to high risk. These findings were potentially valuable to improve cognition of risk, develop proactive risk mitigation strategies, and ensure sustainable development. View Full-Text
Keywords: extreme change; trend change; fluctuating change; population risk; Tibetan Plateau extreme change; trend change; fluctuating change; population risk; Tibetan Plateau
►▼ Show Figures 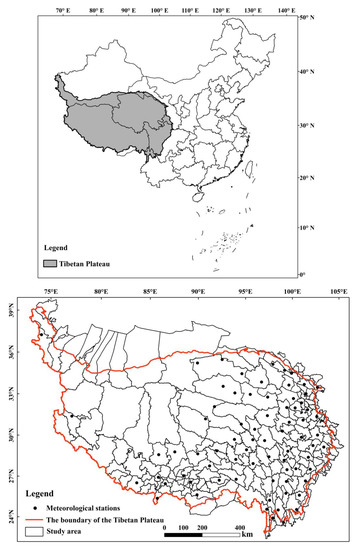