Toward a More Expansive Discourse in a Changing World: An Analysis of Political Leaders’ Speeches on Biodiversity
Next Article in Special Issue

With the emergence of global environmental issues such as global warming and resource depletion as an important part of the international agenda, securing eco-friendly technologies conducive to reducing the environmental load at the national level is becoming a major determinant of national competitiveness. During the 2015 United Nations Framework Convention on Climate Change (UNFCCC) in Paris, South Korea participated in the 21st Conference of the Parties (COP21) and proposed the Intended Nationally Determined Contributions (INDC). According to the INDC, the country has committed itself to reducing 37% of the greenhouse gas (GHG) emissions projected for 2030. In the process of achieving this target, the construction sector has garnered attention as a core area with a high potential for GHG reduction [1,2,3,4,5]. Specifically, in South Korea, the construction industry is the second-largest cause of GHG emissions, contributing to 197.2 million tons of the national total of 850.8 million tons, which is why the reduction target of the construction industry is significantly higher than those of the other industries (32.7% versus 20.5%) [6,7].
In an effort to achieve the targeted reduction, the construction sector uses the life cycle assessment (LCA) method to quantitatively assess and manage the potential environmental impacts caused by materials and buildings throughout their LCA stages. Countries worldwide are evaluating the LCA environmental load, for individual construction materials, using the Environmental Product Declaration (EPD) system adapted to their respective situations and providing information on the environmental profiles of construction materials. Regarding buildings, various LCA methodologies and programs have been developed to enable the quantitative assessment of the environmental load of buildings throughout their LCA stages. Recently, a green building certification system has been gaining a foothold under conventional building standards by their LCA results [8,9,10,11].
In particular, LCA is reflected in the Leadership in Energy and Environmental Design (LEED), a green building rating system widely used in the United States, through MR credit (i.e., Building Life-Cycle Impact Reduction, option 4: Whole building life-cycle assessment). This system is used to conduct building LCA using external programs such as the Athena Impact Estimator or One Click LCA and considers at least three relevant environmental impact categories, including global warming [12,13,14]. Japan’s Comprehensive Assessment System for Built Environment Efficiency (CASBEE) also considers the LCA of major building materials under “L2.2.2 Continuing Use of Existing Structural Frame etc.,” whereby the major building materials are concrete, blast furnace cement concrete, steel frame, rebar, and wood, and only the global warming potential is evaluated [15,16]. Britain’s Building Research Establishment’s Environmental Assessment Method (BREEAM) considers the LCA credits Mat01 “Life Cycle Impacts” for each building/unit using the BREEAM Green Guide Calculator database or the external IMPACT program based on 13 environmental impact categories [17,18,19]. Korea’s Green Standard for Energy and Environmental Design (G-SEED) adopted LCA results as a certification item in its 2016 revision of the certification standards. Currently, a full LCA credit (two points) is awarded when LCA is performed on 99% of the total input material weight for at least three relevant environmental impact categories, including GHG emissions, and a streamlined life cycle assessment (S-LCA) Credit (1 point) when one or more environmental impact categories are assessed for 10 or more major building materials. However, a successful LCA implementation cannot be ensured by the adherence to regulations alone, meaning a special measure needs to be taken to improve this situation. Specifically, the estimation of the environmental load emitted by a building involves the energy consumption required for the operation of the building and also the environmental impacts of all building materials used for construction [20,21]. A real-time LCA is thus a significant challenge, given the complicated construction steps and diverse types of building materials as opposed to general products or systems. When estimating the production stage LCA during the design phase, it is difficult to fix the quantities and types of building materials to be used for construction because of the frequent changes in the draft design, limited information, and time and cost constraints. In particular, S-LCA is likely to become a formal reporting standard unless cut-off criteria for input materials are specified (e.g., two-point items) because it can otherwise be interpreted that one–two or five–six items are possible if counted among the 10 major materials [22,23,24].
To address these challenges, this study examines the characteristics of the environmental impacts of building materials according to cut-off criteria as part of a research project supporting building S-LCA within the G-SEED framework. To implement the proposed method, we chose apartment buildings because they make up more than one-third of all buildings constructed in Korea every year. Specifically, we performed a quantitative evaluation of environmental impacts for three recently constructed apartment building complexes using the LCA method. In compliance with the EN 15804 and G-SEED Guidelines for Building LCA Methods, we performed S-LCA by applying cut-off criteria of 90–99% of the cumulative weight percentile according to six environmental impact potentials, identified the cut-off criterion best suited for S-LCA, and analyzed the effects of cut-off criteria on the S-LCA results.

ISO 14044 defines environmental impact as a complete or partial change to the environment, whether adverse or beneficial, arising from environmental aspects. Environmental impacts generally include global warming potential (GWP), acidification potential (AP), eutrophication potential (EP), ozone layer depletion potential (ODP), photochemical oxidant creation potential (POCP), and abiotic depletion potential (ADP), which can be quantified using various LCIA methods [26,27].
ISO 21931–1 [28] provides methods for assessing the environmental performance of a building and proposes GWP, AP, EP, ODP, and POCP as international and interregional environmental impact potentials. Additionally, considering the growing interest in resource efficiency throughout the building industry (e.g., mixed materials and recycled aggregates), we added ADP and analyzed the six environmental impact categories.
Global warming is an abnormal increase in Earth’s average temperature causing changes in soil and water ecosystems and gradually raising the sea level, thus posing environmental problems. The GWP can be quantified for a 100-year timeframe as a metric of its impact, as proposed in the Intergovernmental Panel on Climate Change (IPCC) guidelines. Among a total of 42 impact materials, such as carbon dioxide (CO2), methane (CH4), and nitrogen oxide (N2O), CO2 is the reference material because it has, by definition, a GWP value of one [29]. Acidification is an environmental phenomenon caused by acidified soil and oceans, mainly due to air pollutants. Toxic heavy metals are leached into the soil and oceans, threatening the survival of living organisms such as fish, plants, and animals. AP can be quantified using the CML 2002 method proposed by Hauschild and Wenzel. Among the 36 acidifying substances, including SO2, hydrogen sulfide (H2S), and hydrogen fluoride (HF), SO2 is considered as the reference [30,31]. Eutrophication is an environmental phenomenon caused by the excessive nutrient enrichment of coastal waters by the inflow of inland waters loaded with nutrients, pesticides, and chemicals, causing pollution problems such as red tides. EP can also be quantified using the CML 2002 method proposed by Hauschild and Wenzel. Among the 39 eutrophying substances, including phosphate (PO43−), ammonia (NH3), and nitrogen oxides (NOx), PO43− is considered as the reference [32]. Ozone layer depletion is a global phenomenon during which the ozone layer (15–30 km above the Earth’s surface) in the stratosphere is destroyed and its concentration declines, causing health hazards such as skin cancer due to the increased level of ultraviolet radiation. ODP can be quantified using the method proposed by the World Metrological Organization (WMO). Among the 23 ozone-depleting substances, including chlorofluorocarbon 11 (CFC-11), bromide trifluoride methane (Halon-1301), and chlorofluorocarbon 114, CFC-11 is considered as the reference substance [32,33]. Photochemical ozone creation is a reaction that refers to the formation of reactive chemical compounds such as ozone (O3) by the action of solar light on air pollutants, causing damage to human health and the ecological balance, such as the inhibition of crop development. POCP can be quantified using the CML 2002 method proposed by Jenkin et al. Among the 128 ozone-forming substances, including ethylene (C2H4), non-methane hydrocarbons (NMVOC), and ethanol (C2H5OH), ethylene is considered as the reference [34,35]. Abiotic depletion, or the depletion of nonliving (abiotic) resources, is a major cause of environmental pollution and destroys the balance of the ecosystem due to excessive resource collection and consumption. ADP can be quantified using the CML 2002 standard suggested by Guinée [36] and considers 89 types of natural resources, including crude oil, natural gas, and uranium (U).

We collected design documents, including the BOQ for each evaluation object to identify the types and quantities of building materials necessary for the construction of the apartment building. In particular, we analyzed the types of building materials on the BOQ and identified the input quantity, specification, weight, and product name for each building material (see Table 4).
Based on the unit weight conversion table, the input building materials were organized based on weight. Based on unit weight, data such as the standard part calculation for construction work, the Korea Passive Building Association, POSCO Corporation, Daebo Tile, and Noru Paint were used. For ready-made products, unit conversion was performed based on their weight. Table 4 outlines the input materials by unit weight using the unit weight conversion table. The unit weight of each input material was set based on the relevant source documents available from the Standard Construction Cost Estimate, Passive House Institute Korea, Posco International Corporation, Daebo Tile, and Noru Paint, or product specifications [47].

4.2. Materials Falling under the Cut-Off Criteria

4.3. Results of Environmental Impact Analysis According to the Cut-Off Criteria

This study analyzed the characteristics of six major environmental impact categories according to cut-off criteria, as part of a project aimed at supporting the S-LCA of apartment buildings in Korea. The results can be summarized as follows:

This work was supported by the National Research Foundation of Korea (NRF) grant funded by the Korea government (NRF-2018R1D1A1B07049390).

The data used in this study are available from the corresponding author upon request.

Gray sections are visualized by diagrams in Figure 5 and Figure 6.

Gray sections are visualized by diagrams in Figure 5 and Figure 6. 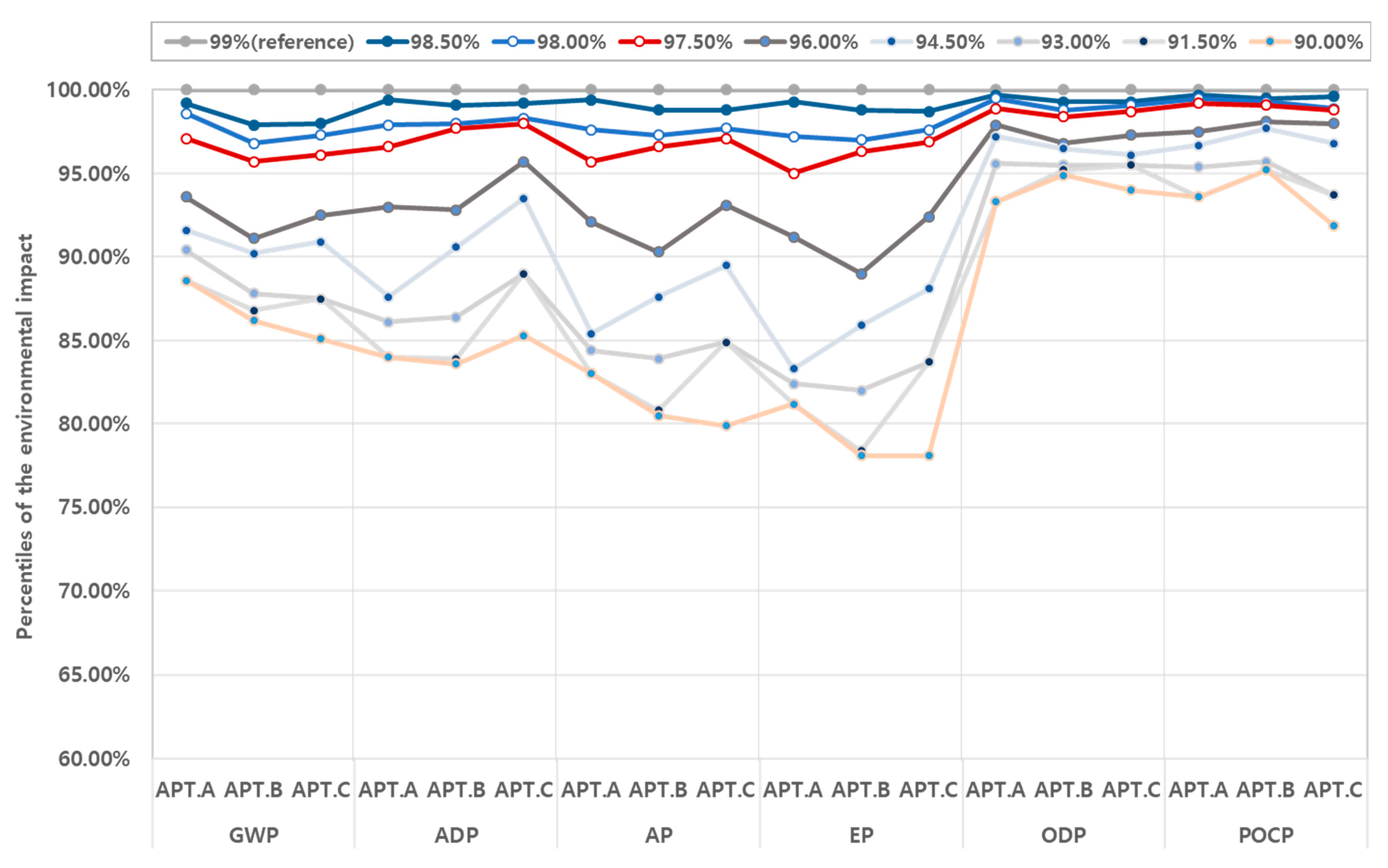