Evaluating the Effects of Biochar with Farmyard Manure under Optimal Mineral Fertilizing on Tomato Growth, Soil Organic C and Biochemical Quality in a Low Fertility Soil
Next Article in Special Issue

Industrial Heritage Tourism as a Driver of Sustainable Development? A Case Study of Steirische Eisenstrasse (Austria)
Previous Article in Journal

Stability of Peer Acceptance and Rejection and Their Effect on Academic Performance in Primary Education: A Longitudinal Research
Previous Article in Special Issue

Military Barracks as Cultural Heritage in Italy: A Comparison between before-1900- and 1900-to-1950-Built Barracks

Developing an Indicator-Based Framework to Measure Sustainable Tourism in Romania. A Territorial Approach

:
Sustainable tourism is gaining importance in national agendas to encourage economic growth, social inclusion, and the protection of cultural and natural assets. More than 13 million tourists (10.6 mil. Romanians and 2.6 mil. foreigners) visited Romania in 2019, the fifth consecutive year of growth for the tourism sector. The authors have selected 10 statistical indicators to highlight the main components for tourism sustainability by using the principal component analysis (PCA). The current patterns of sustainable development of tourism and the territorial inequalities at a micro-scale were assessed based on a sustainable tourism index (STI). In addition, to observe the way indicators interact and determine each other and to analyze the territorial disparities, the hierarchical ascending classification was used. The study was performed using the statistical data available at NUTS5/LAU level provided by the National Institute of Statistics. In addition, various data and information extracted from documents published by the UNWTO, National Institute for Research and Development in Tourism, the World Bank, EUROSTAT, etc., were also used. By applying an STI, the authors were able to assess the tourism development level at a national scale in Romania, delineating the most advantaged/disadvantaged areas. The analysis of sustainable tourism in Romania shows that tourism performance is more consolidated in the big cities, the Black Sea coast, the Danube Delta and the Carpathian Mountains. Studies such as the present one are meant to provide a methodological framework that will be useful to perform a quantitative assessment of the sustainable level of tourism development in terms of economic, social and environmental performance.
Keywords:
tourism sustainability; economic; social; and environmental indicators; territorial disparities; Romania

2. The National Strategic Actions for the Tourism Sector in Romania

The statistical-territorial levels of the Romanian administrative system are NUTS 2 (eight development regions without administrative and legal status), NUTS 3 (41 counties and the Bucharest Municipality), and NUTS 5 (320 towns and 2861 communes) (Figure 1). The counties’ populations vary between 226,665 inh. to 953,158 inh., while the Bucharest Municipality registers 2,133,941 inh.
At the national level, the Master Plan for the Development of National Tourism, 2007–2026 was put together in 2007 at the initiative of the Romanian Government. The immediate objective of this document is to create a general framework of policies for the sustainable development and management of the tourism industry regarding natural and cultural resources. The Master Plan is split up into two main parts: (1) the analysis of the existing situation of Romanian tourism and (2) vision, objectives, and targets. The success of the tourism sustainable development depends not only on the attractive landscape and the tourist facilities but also on the competitiveness and quality of services. The vision of this strategic document is to transform Romania into an excellent tourist destination based on its natural and cultural heritage, corresponding to European Union standards regarding the supply of products and services and the achievement of the environmentally sustainable development of the tourism sector [51]. The National Strategy for the Development of Ecotourism in Romania, 2016–2020 aims to create a functional correspondence between the real premises of Romanian tourism in special natural spaces, the environmental protection requirements and the current trends of the international tourism and ecotourism market. In order to achieve this goal and its orientation towards a sustainable direction, financing mechanisms and programs for the conservation of biodiversity must be developed, the revision of the legislative instruments related to this field, awareness among the factors involved, education at the local level with the aim of orienting towards the principles of sustainable thinking and strengthening institutional capacity to implement environmental legislation [52].

Under the increased demand for more diverse and attractive tourist facilities and services, the development of tourism in a sustainable manner has gained increasingly more attention in the recent years. However, the difficult-to-appreciate effects of the COVID-19 pandemic have significantly affected tourism, thus providing new challenges for sustainable tourism development in the future [1,2,4]. In this context, studies such as the present one are meant to provide a methodological framework that will be useful for the quantitative assessment of the sustainable level of tourism development with the economic, social and environmental performance.
As revealed by the present study, anthropic potential, protected areas, as well as tourism intensity, accommodation occupancy and population employed in tourism are the foremost factors that influence tourism sustainability. The dwellings quality (e.g., the length of the drinking water supply network, the length of the natural gas network) is also an impacting factor on the level of tourism sustainability. Road accessibility is also strongly interrelated to this issue, as is the lack of accessibility to the main tourist attractions and the quality of transport infrastructure which both have a major impact on territorial synapses (development corridors) that link growth poles at different territorial levels.
The STI has the potential to draw out meaning from large amounts of data in order to evaluate and project the sustainable performance of a destination in a comprehensive manner so as to be useful for planning and management. The STIs would be able to identify key areas that have the prospective for sustainable development and areas less suitable for tourism development.
Despite the fact that tourism has substantial economic benefits for the receiving regions, it may also affect the social and cultural values of the resident population. Calculating and visually displaying the STI for each of the NUTS5/LAU levels, the paper results could foster the dissemination of this information in the management of tourism destinations in Romania. As the sustainability of local destinations becomes increasingly important, the integration of national and local policies is seen as indispensable to maximize the contribution of tourism to the objectives of Agenda 2030. This study provides useful spatial data for further in-depth studies to be carried out at different spatial scales.

This paper comprises the results of the HORIZON 2020 Project Social and Innovative Platform on Cultural Tourism and its potential towards deepening Europeanisation (https://cordis.europa.eu/project/id/870644 (accessed on 11 November 2020)): ID 870644, funding scheme Research and Innovation action, call H2020-SC6-TRANSFORMATIONS-2019.

Research-work for this paper is also part of the Institute of Geography research plan ‘‘Regional geographical studies in view of sustainable development and trans-sectorial cooperation’’. 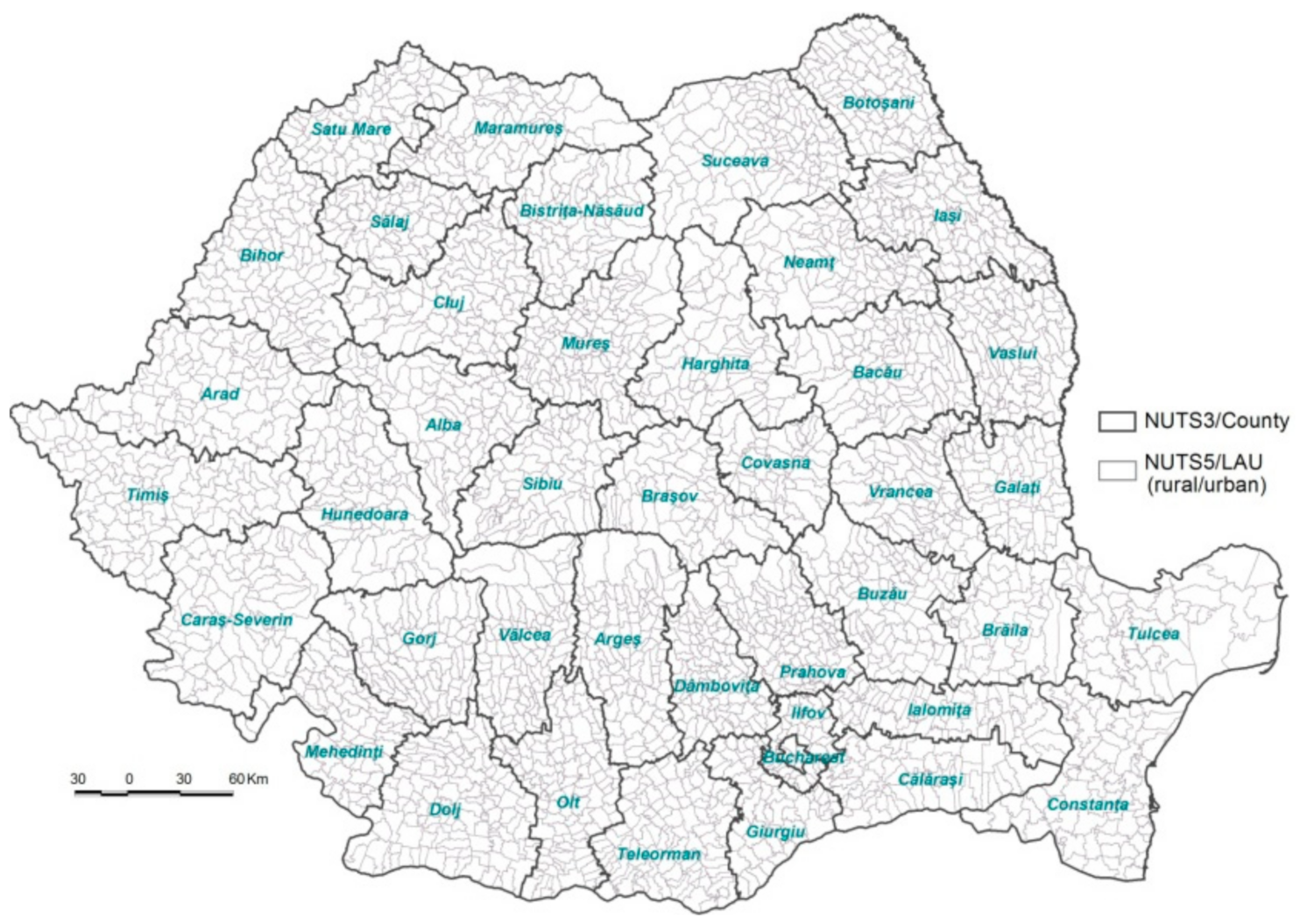 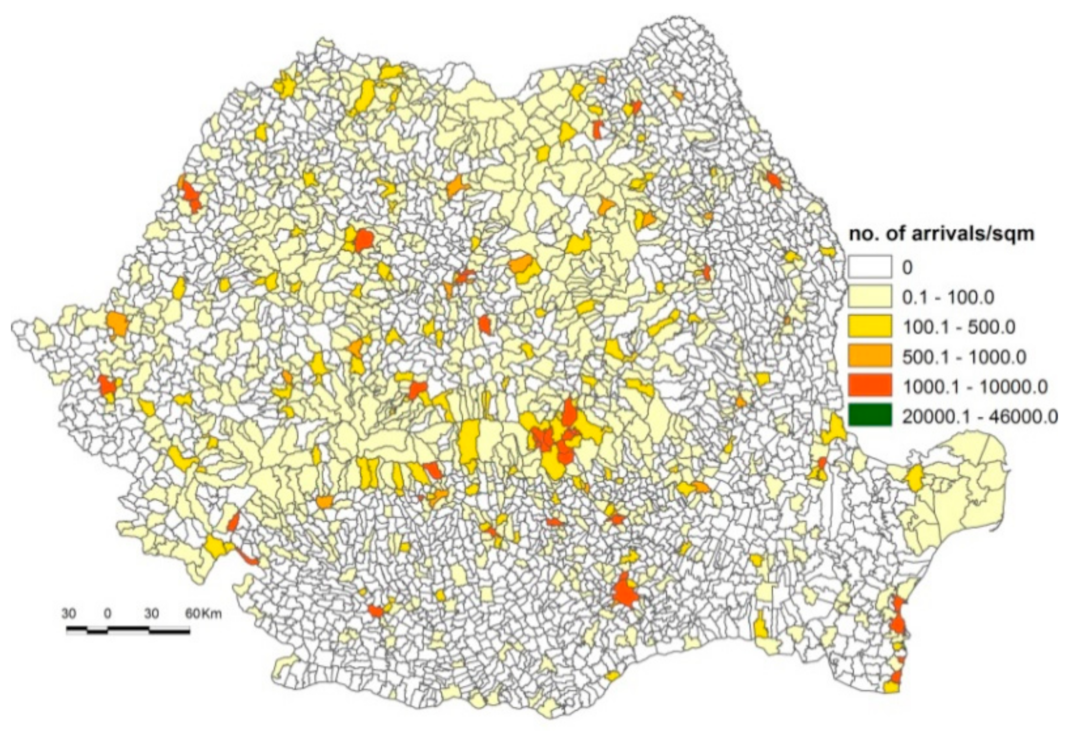 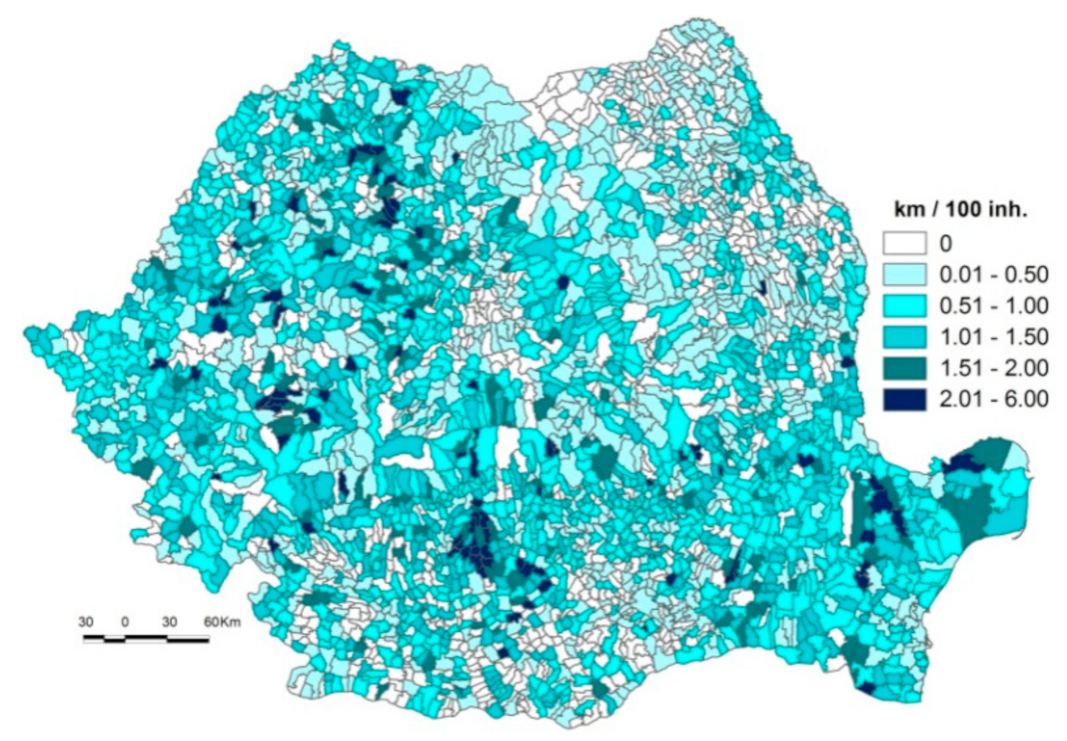