Sustainable Construction Engineering and Management
Next Article in Special Issue

E-Commerce and the Factors Affecting Its Development in the Age of Digital Technology: Empirical Evidence at EU–27 Level
Previous Article in Journal

Death Reflection and Employee Work Behavior in the COVID-19 New Normal Time: The Role of Duty Orientation and Work Orientation

Data emerging from our research shows the high interest that media and social media audiences proved to have for the two cases and their linkages with the general context of COVID-19 pandemic outbreak. Although the particularities of the two situations are scrutinized, some patterns may be pointed out. Even though our research is limited to the two cases analyzed and is restricted to the corpus revealed by the monitoring software used, some interesting elements emerge regarding our research questions, as it will be elaborated below.
Firstly, both cases prove the role that brand promise has in limiting the effects of a crisis. Brand promise can cause boundaries crises and it does not seem to be in a direct relationship between high negative visibility and medium and long-term stakeholders’ resentment. By comparing how conversations tend to move from one medium to another and across multiple audiences (transitioning from Facebook to online media, to mainstream media and TV and then back again on Facebook) in a matter of hours, the Sanador case offers valuable insights into what may happen when a brand delivers its promise (“access to best services and medical technologies”) by ignoring social tensions and the general context. What is most interesting is the fact that although Sanador’s boycott was significantly intense and triggered stakeholders’ outcry and that many patients stated that they would never use the health services of the brand again, the operations, financial situation and market share of the company were not affected. In fact, the crisis produced a high level of negative visibility and caused negative sentiments and hate speech on social media, but, at the end, when confronted with a medical situation and the need for a medical service, stakeholders had no problem in reaching out to the organization’s medical assistance. Although the company’s decision to offer RT-PCR tests at a high price in the context of national emergency for COVID-19 PCR testing sparked disappointment, hate and resentment, all these attitudes and emotions had no linkage with brand promise and with the consumption behaviours of clients using Sanador’s health services. Limiting patients access to pre-paid medical services had the potential to affect trust in the health service provider and to have a negative impact on brand promise in the case of Medlife. Unlike Sanador, Medlife was accused of breaking contracts with patients in need of medical care. Still, by looking at the data in the pandemic context and keeping in mind the national lockdown and strictly limited access to medical services all over the country, we may further observe that it was unlikely to affect brand promise and relationship with stakeholders.
Secondly, in turbulent times, emergency and disasters and emotions and negative attitudes should be seen as context driven and treated as such. The two cases scrutinized in the current paper point out that the expectations that stakeholders have from companies during unstable situations are fluid and may easily shift. It is worth mentioning that financial and economic report of the private medical providers market show an increase in operations, services and profit in 2020 [32]. This increase is seen in direct relationship with the scarce state-owned health infrastructure and medical services provided by public clinics, hospitals and care units.
Thirdly, as mentioned in the previous sections of this paper, although some cases may trigger resentment and outcry, they do not necessary result in a major crisis for the brand. As the two cases show, the medium-term and long-term situations reveal that the brand was not affected and that it managed to recover its visibility and relationship with stakeholders. Thus, although precrisis and social media storms trigger emotions and resentment, they do not necessarily produce major effects such as reputation and financial loss. As revealed by our findings, brand promise has an important role in flattening the effects, as brands managing to deliver according to the brand promise and core stakeholders’ expectations end up in flattering the negative effects. Moreover, we must underline the importance that general context has in shifting attention from one subject to another.
Lastly, our research shows that social media listening should be grounded in crisis communication framework to look for emotions, conversation themes and attitudes likely to impact the brand’s promise and stakeholders’ expectations in specific contexts. In this respect, the development of social media listening and crisis prevention fields should be based on understanding the outlooks of both stakeholders and core stakeholders of the brand to foresee messages, decisions and events that may expand into crises. Automatic tools developed for reading events and predicting their likeliness to develop into crises need to consider the dynamics between brand and its stakeholders and the reasons that the latter have in using the companies’ services.

Our research provides insights for the usage of social media listening in crisis communication and management as well as for the crisis analysis. First, drawing on our findings, we observe that research design for understanding the anatomy of crises should be developed prior to crisis onset. Thus, brands may reach a solid understanding of the situation taking place and further act to avoid stakeholders’ disapproval and resentment. Analyzing a crisis after its end based on online data and on data extracted from social media requires acknowledging the limits with broader consequences on insights and lessons learnt. In addition, any research design aiming to scrutinize a crisis by social media listening tools after the event unfolded should consider the fact that data are not stored in the long term and that brands may delete posts and materials related to the crisis. A significant part of input data is lost, together with valuable context information and learning opportunities.
Moreover, the current article may be useful for further research as it brings together predictive models of crisis communication and management [3,6,7] and efforts made to read threats that may turn into crisis with means, practices and usage of social media listening tools. In this manner, it will be possible to detect not only visibility and media coverage (by observing the volume of conversations) but also the themes they revolve around [4,13,18]. The relevance of these themes rather than the number of negative comments is currently explored as being an indicator for a probable cause of crisis. In addition, further research and design should consider looking at social media conversations, emerging themes and their relation with brand promise and core target expectations [23].

This research was funded by Research grants for young researchers (2019–2021), supported by National University of Political Studies and Public Administration (SNSPA), Grant Number 47/2019.

Processed data are available on request.

The authors would like to thank the media monitoring company for their assistance with the collection of data. For commercial reasons, their name is not made public.

The authors declare no conflict of interest. The funders had no role in the design of the study; in the collection, analyses or interpretation of data; in the writing of the manuscript; or in the decision to publish the results. 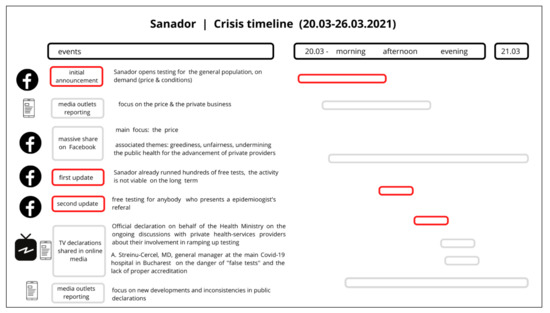 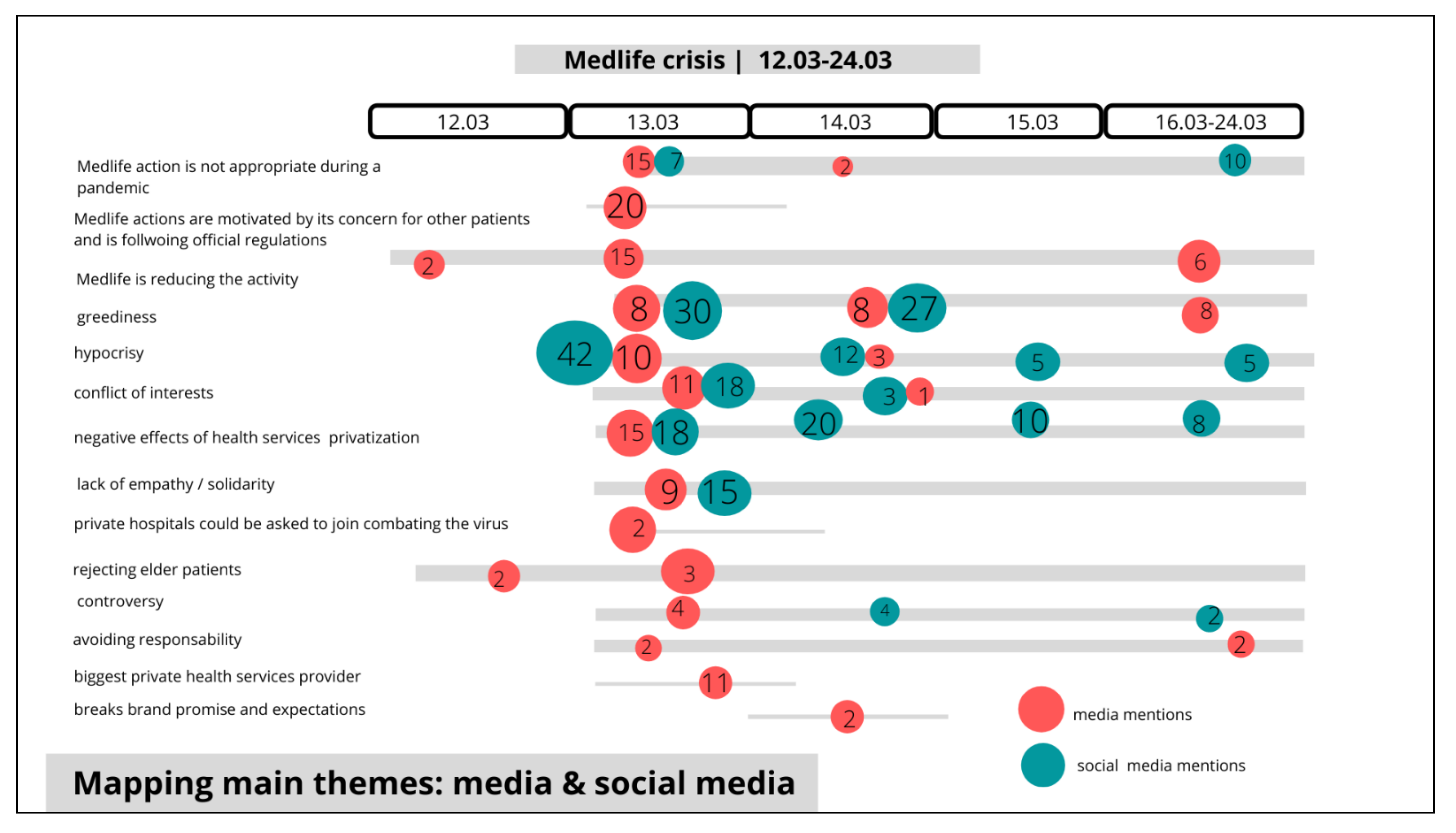