The Effects of Fare-Free Public Transport: A Lesson from Frýdek-Místek (Czechia)

Phthalate acid esters (PAEs) are widely used as raw materials for industries that are well known for their environmental contamination and toxicological effects as “endocrine disruptors”. The determining of PAE contamination was based on analysis of dimethyl phthalate (DMP), diethyl phthalate (DEP), dipropyl phthalate (DPP), dibutyl phthalate (DBP), diisobutyl phthalate (DiBP), dicyclohexyl phthalate (DCHP) and di(2-ethylhexyl) phthalate (DEHP) in wastewater and sediment samples collected from city sewer systems of Lithuania and Poland, and Denmark for comparison. The potential PAE sources as well as their concentrations in the wastewater were analyzed and discussed. The intention of the study was to determine the level and key sources of pollution by phthalates in some Eastern European countries and to reveal the successful managerial actions to minimize PAEs taken by Denmark. Water and sludge samples were collected in 2019–2020 and analyzed by gas chromatography-mass spectrometry. The highest contamination with phthalates in Lithuania can be attributed to DEHP: up to 63% of total PAEs in water samples and up to 94% of total PAEs in sludge samples, which are primarily used as additive compounds to plastics but do not react with them and are gradually released into the environment. However, in water samples in Poland, the highest concentration belonged to DMP—up to 210 μg/L, while the share of DEHP reached 15 μg/L. The concentrations of priority phthalate esters in the water samples reached up to 159 μg/L (DEHP) in Lithuania and up to 1.2 μg/L (DEHP) in Denmark. The biggest DEHP concentrations obtained in the sediment samples were 95 mg/kg in Lithuania and up to 6.6 mg/kg in Denmark. The dominant compounds of PAEs in water samples of Lithuania were DEHP > DEP > DiBP > DBP > DMP. DPP and DCHP concentrations were less than 0.05 μg/L. However, the distribution of PAEs in the water samples from Poland was as follows: DMP > DEHP > DEP > DBP, and DiBP, as well as DPP and DCHP, concentrations were less than 0.05 μg/L. Further studies are recommended for adequate monitoring of phthalates in wastewater and sludge in order to reduce or/and predict phthalates’ potential risk to hydrobiots and human health. View Full-Text
Keywords: PAEs; potential sources; phthalate concentrations; compound distribution; regulation PAEs; potential sources; phthalate concentrations; compound distribution; regulation
►▼ Show Figures 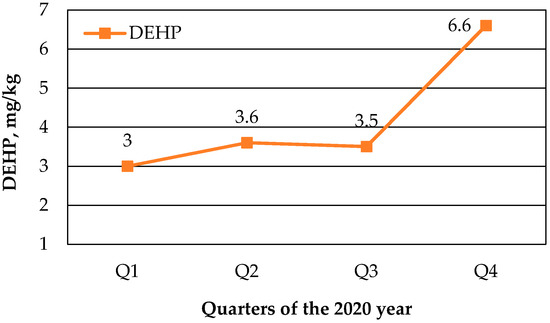