From Seaweeds to Cosmeceutics: A Multidisciplinar Approach
Previous Article in Journal

A Review on the Efficient Catalysts for Algae Transesterification to Biodiesel

The depletion of fossil fuel resources and increasing environmental pollution led to a trend for using alternative, clean, green, and sustainable fuel and energy resources. To attain this aim, using biomass as an alternative resource for diesel production has been a hotspot among researchers. Biodiesel has several advantages, such as being lower toxic and more renewable, and eco-friendlier than diesel from fossil fuel resources. Several edible and non-edible bio-sources were used for the production of biodiesel from the transesterification process. Algal oil as a non-edible source is considered an abundant, low cost and green substrate for biodiesel production. Various factors such as reaction conditions and the type of catalyst affect the biodiesel production process. Different catalytic systems such as basic and acidic homogeneous and heterogeneous catalysts and biocatalysts were introduced for the process in the literature, and each proposed catalyst has its own advantages and disadvantages. For instance, in spite of the lower cost and better mass transfer of base and acid homogeneous catalysts, reaction system corrosion, non-reusability, and soap formation are serious challenges of these catalysts at an industrial scale. On the other hand, acid and base heterogenous catalysts overcame the issues of corrosion and recovery, but some matters such as mass transfer limitation, high cost, and weak performance in catalyzing both esterification of FFAs and transesterification of lipids must be taken into account. In addition, bio-catalysis as a high-cost process led to a purer product formation with less side reaction. Therefore, several significant factors should be considered for transesterification catalysts such as availability, cost, reusability, stability, mass transfer, and the possibility to manage both the transesterification of triglycerides and the esterification of FFAs, selecting a catalyst with predominant pros is viable. Here, a review of the biodiesel production from algal biomass focusing on the efficient catalyst of the process is presented. View Full-Text
Keywords: algae to biodiesel; transesterification; efficient catalyst algae to biodiesel; transesterification; efficient catalyst
►▼ Show Figures 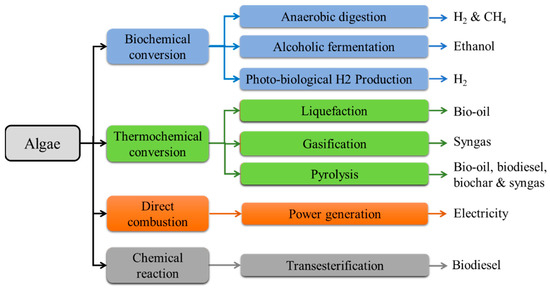