Globally, the most problematic greenhouse gas (GHG) emissions of ruminant livestock is methane (CH4), with a global warming potential 25 times that of carbon dioxide. This work considers the emissions and production effects of powdered activated carbon (PAC) at 0.5% by dry matter (DM) on methanogenic rumen flora as the major source of dairy cattle enteric methane emissions. In total, 180 dairy cattle located in Brymaroo, Queensland (QLD), Australia, were studied in a three-cycle repeated measures ANOVA format with a 4 week primary interval. Emissions eructated during milking and in faecal deposits were measured, and in addition, 16S rRNA gene sequencing was performed to determine the collective populations of prokaryotic bacteria and archaea as well methanogenic communities for each treatment. Moreover, 0.5% PAC addition reduced CH4 emissions by 30–40% and CO2 emissions by 10%, while improving daily milk production by 3.43%, milk protein by 2.63% and milk fat by 6.32%, on average for the herd (p < 0.001 in all cases). rRNA gene sequencing showed populations of methanogenic flora decreased by 30% on average with a corresponding increase in the nonmethanogenic species. We strongly advocate further on-farm trials with the dietary addition of PAC in ruminant diets to mitigate emissions while maintaining or improving productivity. View Full-Text
Keywords: greenhouse gas (GHG) emissions; methane (CH4); powdered activated carbon (PAC); ruminants greenhouse gas (GHG) emissions; methane (CH4); powdered activated carbon (PAC); ruminants
►▼ Show Figures 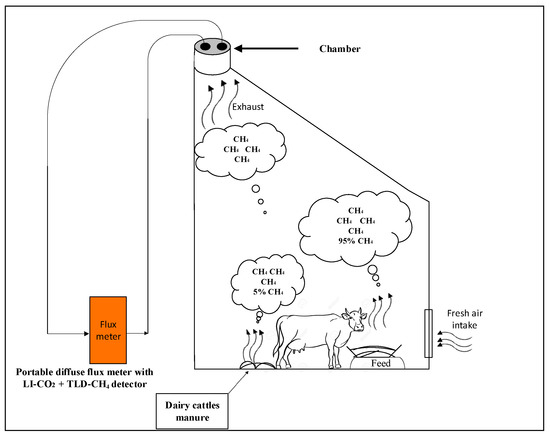