Aiming to tackle the high levels of youth unemployment and rates of Not Employed, in Education, or Training (NEET), the European Union launched the flagship policy Youth Guarantee in 2013. In this article we evaluate this policy in order to reveal the lessons it can teach us and possible ways for its improvement to achieve a sustainable active labor market policy. We use the data collected through the Indicator Framework for Monitoring the Youth Guarantee to analyze the policy impact, limited to some of the countries with the highest NEET rates: those of the Mediterranean European Economic Area (Cyprus, Greece, Italy, and Spain). We used the data to create regression models for the evaluation of policy measures, spread, and achievements. In our findings we reveal the importance of time in the policy implementation, the differences and commonalities between the countries, and hidden problems in the data collection that lead to biases and misleading results. We conclude that it is too soon to judge the usefulness of the policy and recommend an improvement in the data collection process.
Keywords: Youth Guarantee; NEET; policy evaluation; European Union; Mediterranean European Economic Area Youth Guarantee; NEET; policy evaluation; European Union; Mediterranean European Economic Area

The rate of the youth Not Employed, in Education, or Training (NEET) rose in the European Union (EU) as a consequence of the financial crisis of 2008 [1]. The increase in unemployment hit the youth hard, especially in Southern Europe. Thus, it became much more difficult to find a job and many lost all hope to have a decent future. EU member states’ reaction to the problem was the creation of the Youth Guarantee [2], which nowadays is the main European policy addressing the issue. Its development started in 2013 and it was implemented for the first time in 2014. Since then, it has faced very different situations: the aftermath of the 2008 financial crisis and the impact of the COVID-19 crisis, both moments that had a great impact on the expectations of the youth. Within this framework, we try to answer the question of whether one should consider the Youth Guarantee a success or a failure.
By answering that question, we aim to contribute to the policy evaluation and future improvements that may lead to a sustainable NEET situation. With this article, we present a scientific analysis of the Youth Guarantee that shows hidden problems, highlights good practices, and provides policy recommendations and analytical tools for the benefit of the policy. Consequently, to answer this question of the policy’s success, we firstly review what research revealed, directly and indirectly, about the Youth Guarantee. We built on the findings of other authors to better understand the context of the policy and its repercussions. We take a second step in that direction by creating some statistical tools that helped us show the achievements of the Youth Guarantee during its implementation. It clarifies how far away the policy is from solving the NEET problem. Based on all the collected knowledge and analyses, we include conclusions on what one can learn from the data, which elements are most relevant, and which aspects should be reconsidered in order to contribute to the improvement of the Youth Guarantee.
This article’s original contribution relies on its analytical approach. It is not the first analysis of the Youth Guarantee, but most of the research about the policy depends on macroeconomic data and not policy data [3,4]. Although many studies tried to judge the policy based on the general context and macroeconomic indicators, we limit our approach to direct policy results. We also add extra layers of modelization to the previous superficial use of the policy stats [5], without forgetting the general context in which the Youth Guarantee is implemented.
We also signal the relevance of including procedures to collect standardized data within this kind of policy. We confirm the thesis of previous authors and show how this can help the policy evaluation in a way that can directly lead to policy improvement [6]. However, regarding the Youth Guarantee, we reveal flaws, errors, and biases within the published datasets. This finding is crucial, because without its acknowledgement, one would assert incorrect conclusions guided by those biases and/or one could not realize that in the databases there are some cases of a relevant lack of information.
Due to the novelty of the policy, there are many gaps that new research can fill. Therefore, we decided to highlight mistakes in previous research that led to wrong conclusions. In this article we show that, in many cases, those wrong results were caused by a need to rush into conclusions. We show that part of them are a consequence of not considering the time the policy needed to be completely implemented, which translates to correctly evaluating the fitness of the Youth Guarantee.
Following this introductory section, we present the theoretical framework, where we discuss the major contributions to the analysis of the Youth Guarantee. We include the main contributions to the debate of the policy, as well as the aspects that we considered most relevant to help us evaluate its success. Right after that section, we explain the methodology we used in our research: a statistical approach based on the Youth Guarantee datasets. We show the results of its implementation in the fourth section, where we present the statistics and contrast different variables to check the policy’s performance. To conclude the article, we present our findings in context with previous research results. We also highlight the added value of this text, possible ways to modify the policy based on our findings, and different options to improve the analysis to further contribute to the topic.

This research was funded by the EEA and Norway Grants Fund for Youth Employment under grant 2017-1-345. 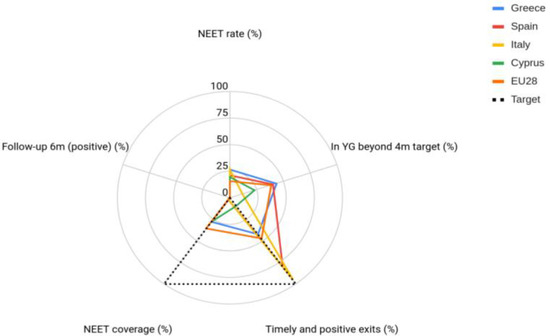 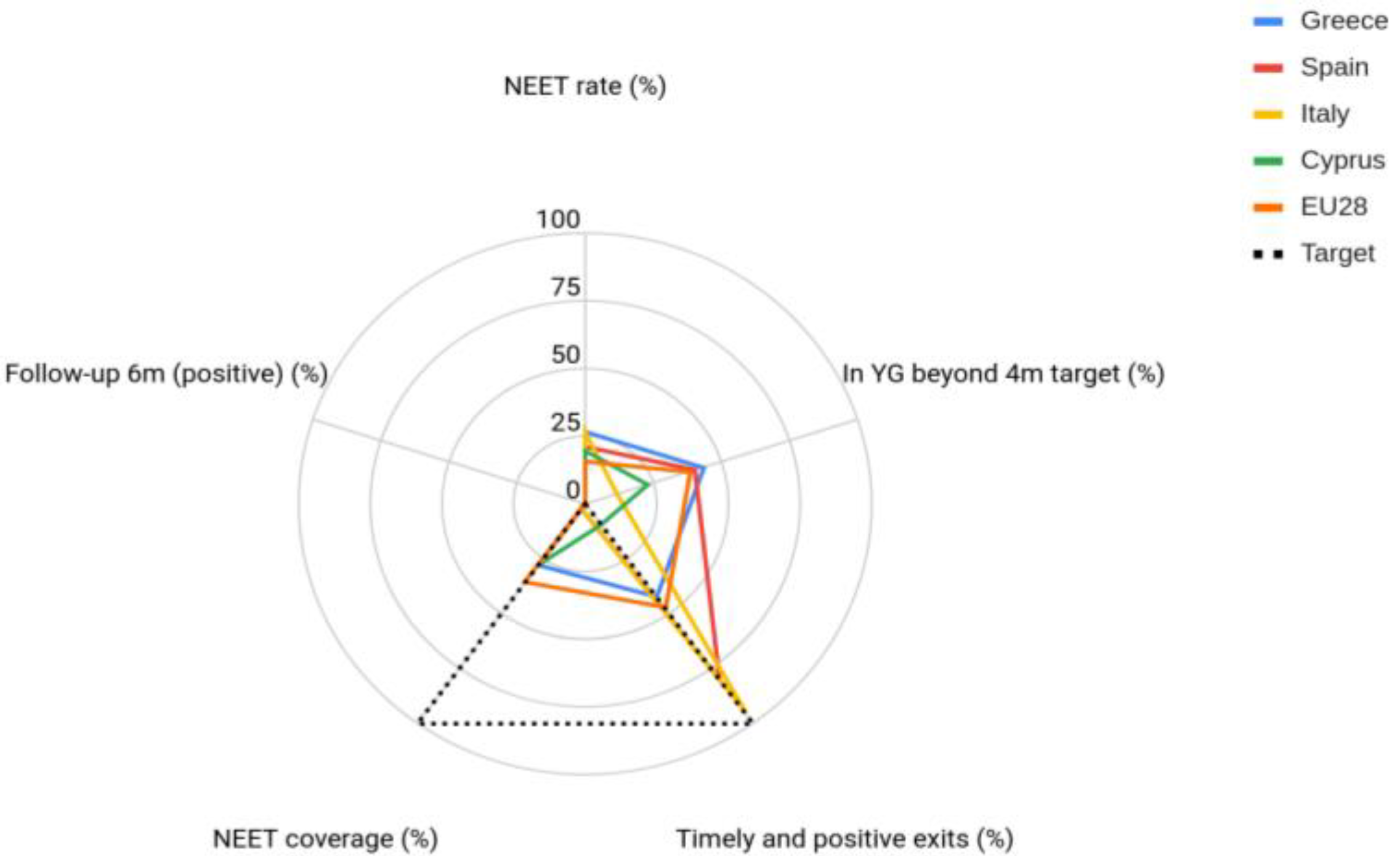 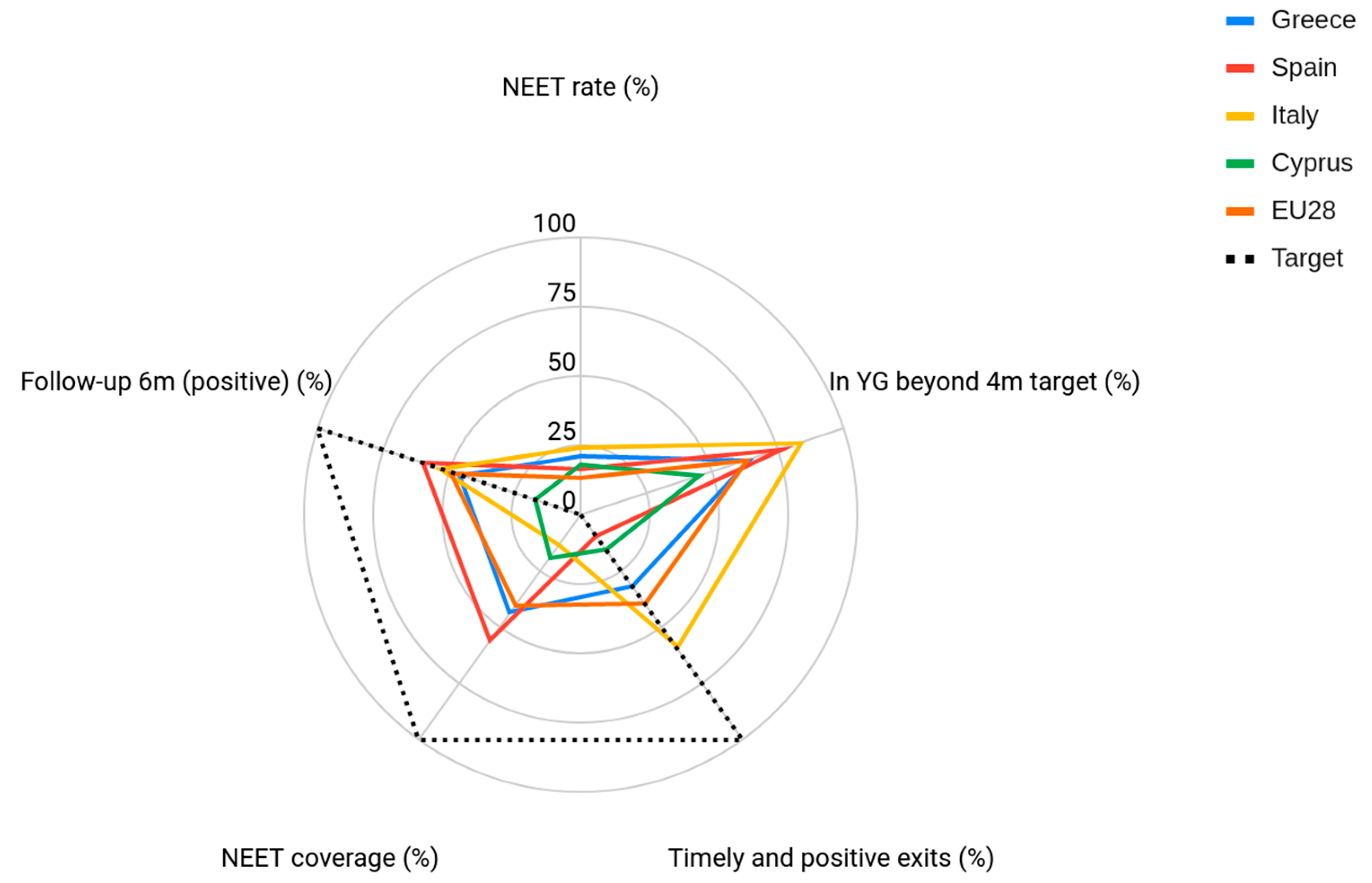 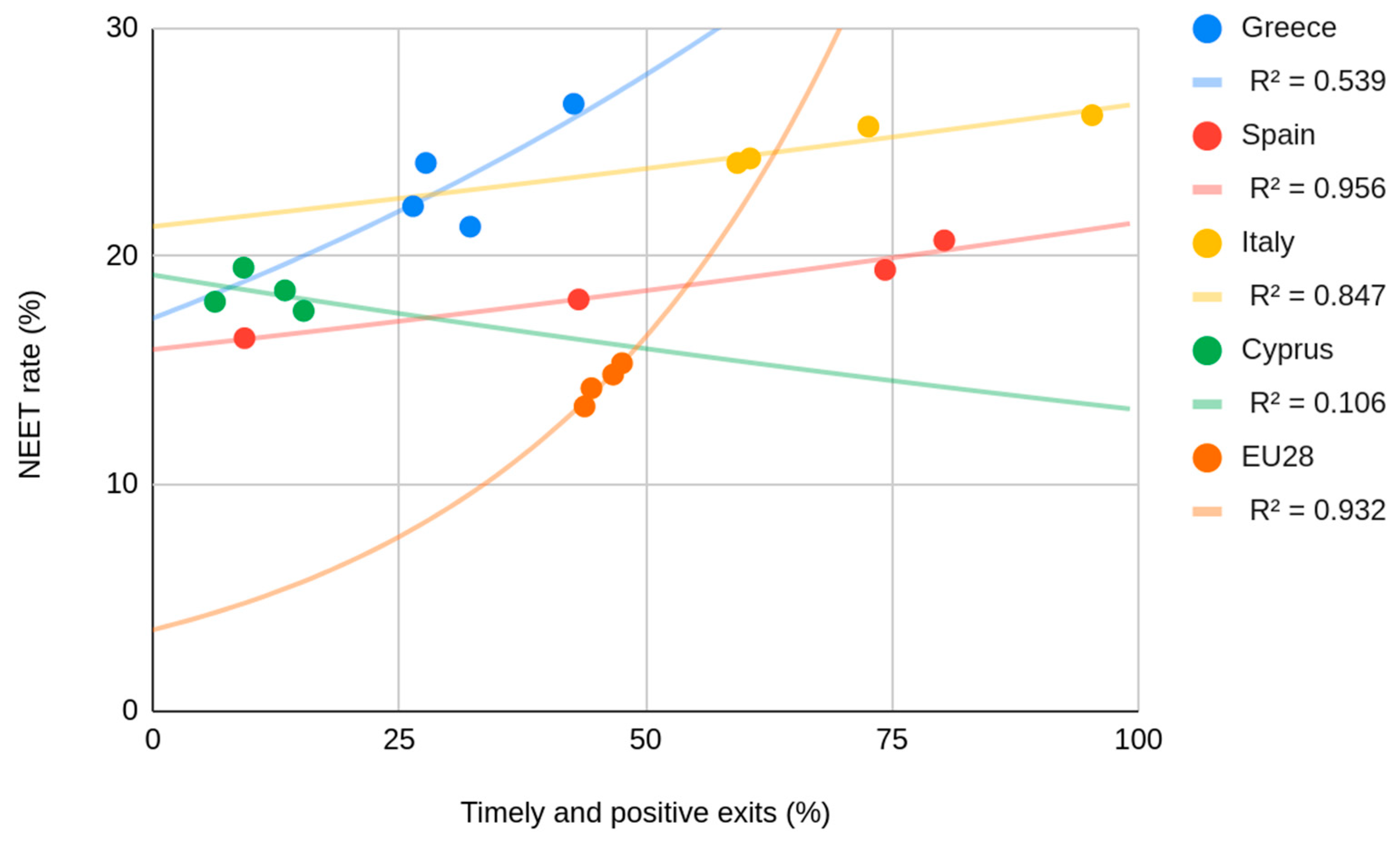 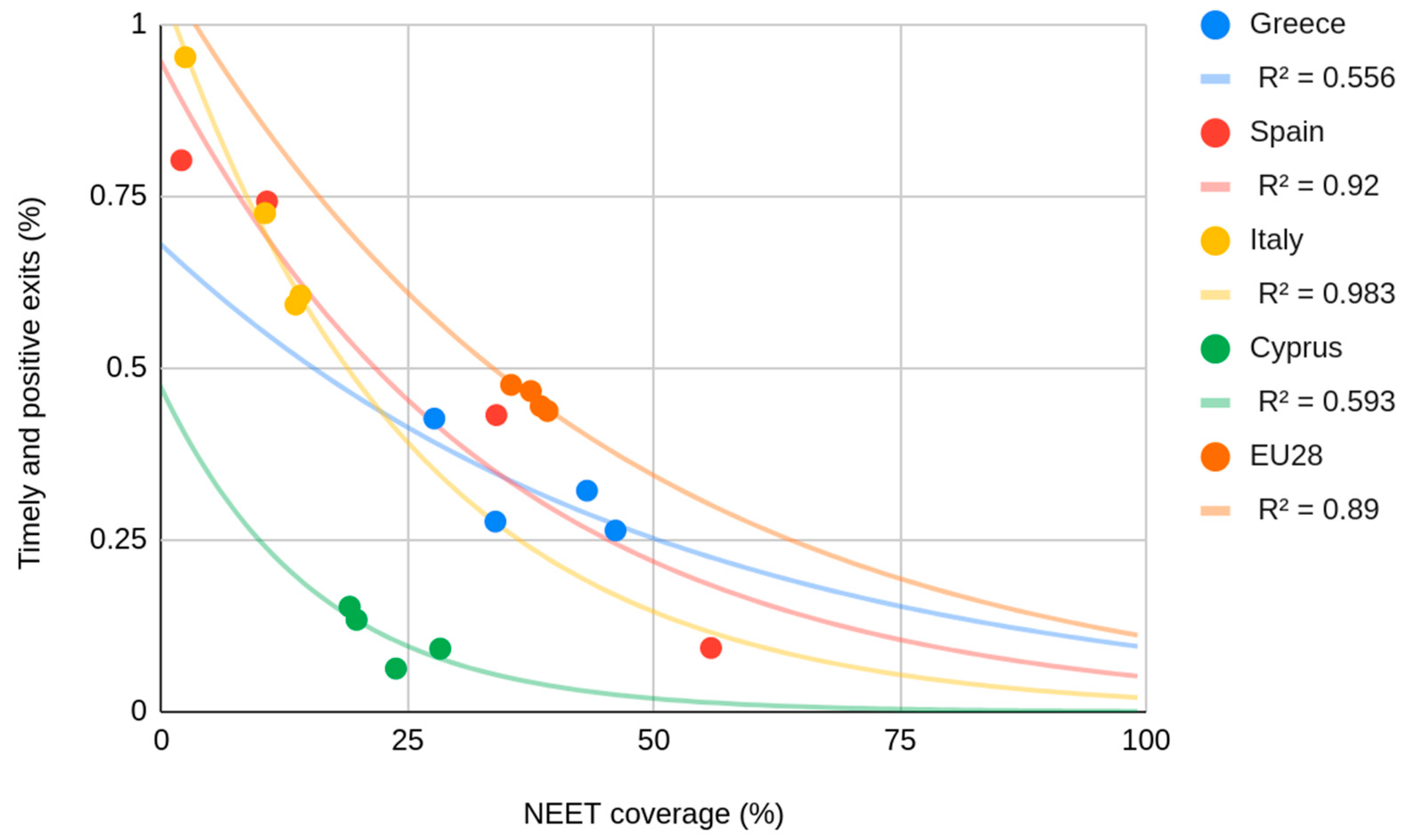 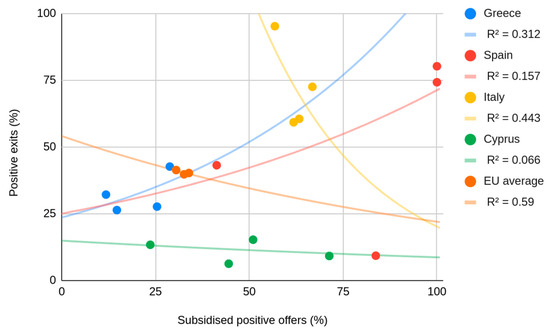 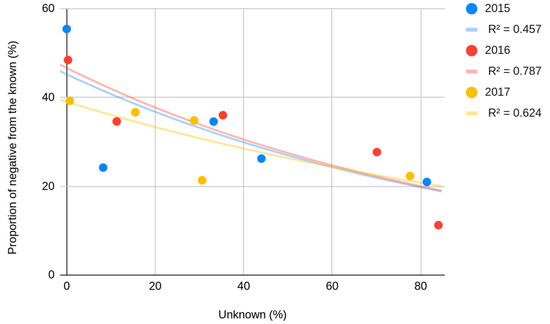