Inadequate Standards in the Valuation of Public Goods and Ecosystem Services: Why Economists, Environmental Scientists and Policymakers Should Care
Previous Article in Special Issue

Considering climate change, recent political debates often focus on measures to reduce CO2 emissions. One key component is the reduction of emissions produced by motorized vehicles. Since the amount of emission directly correlates to the velocity of a vehicle via energy consumption factors, a general speed limit is often proposed. This article presents a methodology to combine openly available topology data of road networks from OpenStreetMap (OSM) with pay-per-use API traffic data from TomTom to evaluate such measures transparently by analyzing historical real-world circumstances. From our exemplary case study of the German motorway network, we derive that most parts of the motorway network on average do not reach their maximum allowed speed throughout the day due to traffic, construction sites and general road utilization by network participants. Nonetheless our findings prove that the introduction of a speed limit of 120 km per hour on the German autobahn would restrict 50.74% of network flow kilometers for a CO2 reduction of 7.43% compared to the unrestricted state. View Full-Text
Keywords: road network analysis; CO2 emissions; speed limits; traffic; navigation services road network analysis; CO2 emissions; speed limits; traffic; navigation services
►▼ Show Figures 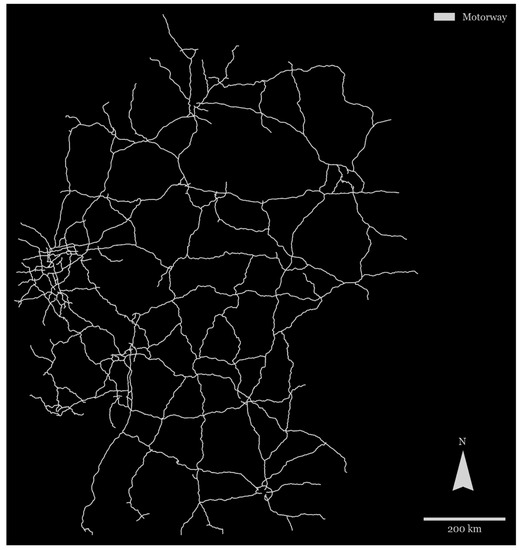