Citizenship and Pluriculturalism Approaches of Teachers in the Hispanic and Japanese Contexts: Higher Education Research

Meteorological disasters refer to the disasters caused by atmospheric movement and evolution [1] and include blizzards, hailstorms, droughts, heat waves, tornadoes, cyclonic storms, thunderstorms and floods. These disasters have become a global challenge. Over the 20-year period between 1998 and 2017, climate-related and geophysical disasters killed 1.3 million people and left a further 4.4 billion injured, homeless, displaced or in need of emergency assistance [2]. From 1984 to 2014, meteorological hazards caused an average of 4066 deaths per annum [3].
Meteorological disasters in China generally possess different characteristics, high frequency, strong seasonality, large-scale loss and wide range of influence. Along with the occurrence of natural disasters, a series of other disasters often follow as ripple effects or a disaster chain. Within a disaster chain, the earliest disasters are considered as the primary disasters, which may lead to secondary disasters. When the harmonious conditions of human existence are disrupted and a series of other disasters aroused, derivative disasters may occur [4]. In 2017, the number of people affected by meteorological, secondary and derivative disasters was as high as 140 million. Meteorological risk levels are on the rise. It is difficult to fight, prevent and mitigate huge natural disasters by relying solely on the government [5].
An effective approach to deal with meteorological disasters is to raise public awareness and engage the whole public in meteorological disaster prevention and mitigation (MDPM). The magnitude of the damage caused by meteorological disasters depends not only on the intensity of the disaster, but also largely on the disaster prevention awareness and behavior of the victims. The main body of a disaster incident is the affected public, who plays a key role in disaster prevention and mitigation [6].
The United States, Japan, India and other countries have paid great attention to the field of public awareness of disaster prevention and mitigation. For example, the United States publishes meteorological disaster information in real time through the internet, television, radio and other news media to guide the public. Japan issued the “Basic Law on Disaster Countermeasures” to clarify the disaster prevention responsibilities of the state, the prefectural government, cities, villages and citizens. India has also developed a series of measures to raise the awareness of the public regarding disaster reduction [7]. China, too, has increasingly guided the public to participate in disaster prevention and mitigation. In 2016, the State Council promulgated the “National Natural Disaster Relief Emergency Plan”, proposing an emergency plan in which the government acts as the leader and social mutual assistance as the auxiliary, and at the same issuing guidance on how the citizens can save themselves.
Although China has begun to emphasize public power in emergency assistance, people still mainly rely on government-led rescue operations. Frequently, the damage is largely increased due to weaker knowledge, willingness, ability to participate and self-protection skills of the public. Hence, a question arises: What are the influencing factors that affect public participation in MDPM? So far, only a few scholars have studied MDPM from the perspective of the factors influencing public participation. Therefore, this question is to be further elaborated in this paper.
The rest of the paper is structured as follows: Section 2 conducts a review of the related theories. Section 3 analyzes the theoretical mechanism and establishes the research hypothesis. In Section 4, model specifications will be introduced. In Section 5 and Section 6, the data is processed and the results are analyzed. Section 7 draws conclusions.

3.1. The Public’s Attention to Meteorological Events Affects Its Willingness and Ability to Participate in MDPM

3.2. Information Acquisition Affects the Public’s Willingness and Ability to Participate in MDPM

3.3. Governmental Behavior Affects the Public’s Willingness and Ability to Participate in MDPM

3.4. The Degree of Community Participation Affects the Public’s Willingness and Ability to Participate in MDPM

4.2. Distribution and Collection of Questionnaires

To reach a higher response rate, the questionnaires have been collected through the website of the Chinese Weather Network, powered by the Baidu Questionnaire engine (with 63,000 questionnaires collected in December 2017 and January 2018). Once the participants complete the questionnaire, they have an opportunity to draw a prize from the website, worth 500 to 5000 yuan in the form of a discount coupon on a digital product. The questionnaire was randomly distributed to ensure the collection of data from different groups as much as possible, which will guarantee the credibility of the various analyses. A total of 62,895 questionnaires were determined to be valid.
The statistical results of the sample data are shown in Table 2. The structure of gender, generation, educational level, living area, place of residence and occupation are consistent with the distribution of netizens in China, and the sample was deemed to be representative.

Cronbach’s alpha is the most common method to measure reliability, but the α coefficient will be affected by the size of the subject’s trait variation, the average of correlations between questions, the number of questions and the homogeneity of the difficulty of the questions [47,48]. Taylor and Campbell suggested that the more homogeneous the test traits of the subjects, the smaller the estimated α coefficient. The α coefficient cannot be used to estimate the reliability of a single observation variable and allow the measurement error between the observation variables to be correlated [49]. Therefore, a confirmatory factor analysis (CFA) was carried out to calculate the construct reliability, which is an internal reliability index. If the reliability is high, there is a higher correlation between indicators. Some scholars believe that when this index is greater than, or equal to, 0.5, the measurement is consistent [50]. Some scholars emphasized that this index needs to be at least 0.6 [51]. Although there is no strict rule to determine at which level the coefficient can be utilized to claim a good reliability, quite a few scholars suggested the following rough judgment principle: a reliability coefficient of 0.9 or higher is “excellent”; around 0.8 is “very good”; 0.7 is “moderate”; above 0.5 is acceptable; below 0.5 means that at least half of the observational variation comes from random errors, so its reliability is insufficient and should not be accepted. The results are shown in Table 3, with the composite reliabilities greater than 0.7, indicating that the interrelation between indicators was moderate in the SEM model.

According to the CFA analysis of the composition of the questionnaire, the factor load was greater than 0.5, indicating that it has a high validity. If it were less than 0.5, the question items would need to be adjusted or deleted to ensure the validity of the measurement items. The results of the specific factor analysis are shown in Table 4. The factor load and the index of average variance extracted were higher than 0.5, which means that the measurement had a high convergent validity. There was a strong correlation between the explicit variables within one latent variable.
The results of the discriminant validity analysis are shown in Table 5.
It can be seen that each latent variable has a correlation relationship under the significant level of α = 0.01 (p < 0.01). In addition, the absolute value of the correlation coefficient is less than the corresponding square root of the average variance extracted (AVE), indicating that there was a certain correlation and a certain degree of discrimination between each pair of latent variables. Hence, the discrimination validity of the scale data is ideal, and it can be concluded that there is a strong differentiation between latent variables.

To estimate the hypotheses proposed above, the maximum likelihood estimation method was utilized, and the estimation results are shown in Table 6. It can be seen that the P value of each path is significant at the level of α = 0.01, indicating that the path relationships do not need to be adjusted. The model has not been modified, so the specific coefficient values are not discussed here. The final result will be explained in Section 5.4.
Based on the significance level shown in Table 6, each path is significant. However, Hypothesis 3 is false, with a significant path relationship, indicating that information acquisition has a negative influence on the public’s willingness to participate; Hypothesis 6 is false, and the path relationship is significant, implying that the government’s organizational behavior has a negative influence on the participants’ ability to participate.

5.4. Model Fitting and Analysis of Results

The fitting indicators used include Chi-square (), degree of freedom (df), /df, RMSEA, Incremental Fit Index (IFI), Tucker-Lewis Index (TLI), Comparative Fit Index (CFI). The value of NFI was between 0 and 1. If the value is greater than 0.9, the model is fit [52]. IFI, TLI and CFI are the same as NFI. The value of /df should be smaller than 3, and RMSEA should be smaller than 0.08. The initial fitness index is shown in Table 7.
From the fitting index in Table 7, the values of IFI, TLI and CFI were all less than 0.9, and RMSEA was greater than 0.08 before adjusted, which means that the fitting degree of the model is not high, and hence that the model needed to be further adjusted. After the model was corrected according to the modification index, each indicator reached the required value of the indicator. The revised indicators are shown in Table 7. Because the sample size was large, there was no excessive restriction on the Chi-square value, and the remaining indicators were consistent with the model fitting index. The adjusted model is shown in Figure 2. The data show that after adjustment and correction, the theoretical model had a good fitting and feasibility, and the results of the model could be analyzed.
From the above analysis of results, it can be concluded that the degree of community participation and governmental behavior have a higher and significant influence on the public’s participation and willingness, and the direct impact factors of standardization are 0.636 and 0.494, respectively. The public’s attention to meteorological events and the public’s participation ability are small but significant, and the direct impact coefficients of standardization are 0.057 and 0.075, respectively. Information acquisition has a significant negative impact on the public’s participation willingness, with a standardized impact factor of −0.084. 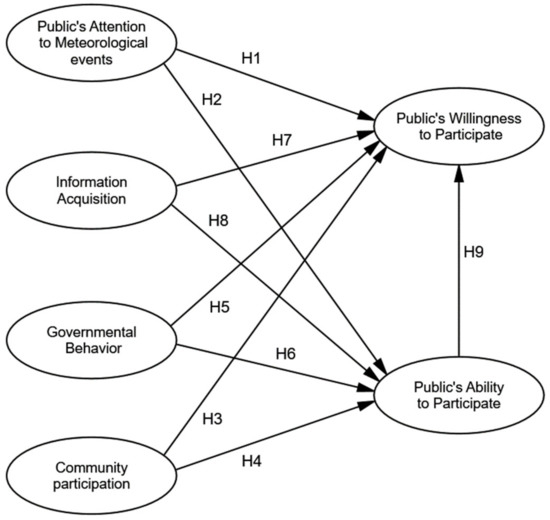 Table 7. Fitting Index.
Table 7. Fitting Index.
© 2020 by the authors. Licensee MDPI, Basel, Switzerland. This article is an open access article distributed under the terms and conditions of the Creative Commons Attribution (CC BY) license (http://creativecommons.org/licenses/by/4.0/).
We use cookies on our website to ensure you get the best experience. Read more about our cookies here.
Accept
We have just recently launched a new version of our website. Help us to further improve by taking part in this short 5 minute survey here. here.
Never show this again