The Structural Relationship among Trajectories of Ego-resilience, Neglectful Parenting, Bilingual Competency, and Acculturative Stress of Multicultural Adolescents in South Korea
Next Article in Special Issue

Trees have a significant impact on the airflow and pollutant diffusion in the street canyon and are directly related to the comfort and health of residents. In this paper, OpenFOAM is used for simulating the airflow and pollutant diffusion in the street canyon at different height–width ratios and tree layouts. Different from the drag source model in the previous numerical simulation, this study focuses on the characterization of the blocking effect of tree branches on airflow by using more precise and real tree models. It is found that the airflow is blocked by the tree branches in the canopy, resulting in slower airflow and varying velocity direction; the air flows in the pore area between trees more easily, and the vortex centers are different in cases where the street canyon shape and tree layout are different. Low-velocity airflow distributes around and between two tree canopies, especially under the influence of two trees with different spacing. At the height of the pedestrian, the tree branches change the vortex structure of airflow, and thereby high pollutant concentration distribution on both sides of the bottom of the leeward side of the street canyon changes constantly. In the street canyon, the small change in tree spacing has a very limited influence on the pollutant concentration. The street canyon has the lowest average pollutant concentration at the largest y-axis direction spacing between two trees. View Full-Text
Keywords: numerical simulation; street canyon; real tree; pollutant numerical simulation; street canyon; real tree; pollutant
►▼ Show Figures 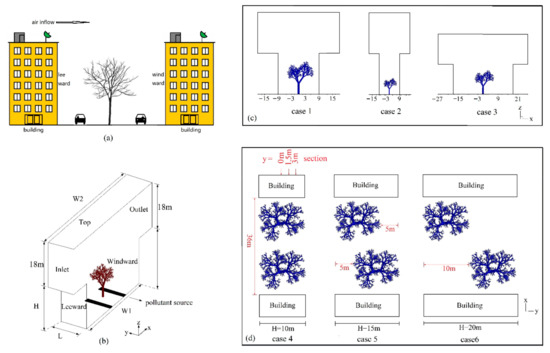