Non-Linear Microscopy: A Well-Established Technique for Biological Applications towards Serving as a Diagnostic Tool for in situ Cultural Heritage Studies

:
This paper aims at presenting an innovative methodological approach to identify the heat storage and heat conductivity coefficients of a smart house. For this purpose, an experimental room is selected and heated to a high degree and then left for cooling, during which the reduction in the room temperature is measured with time. The time–temperature record provides the basis for determining the heat storage and heat conductivity coefficients through an objective standard curve matching procedure as the main context. These coefficients help to calculate the heat performance of a single room and, accordingly, the whole building, depending on its surrounding environment, construction material, volume and meteorological conditions. The proposed methodology depends on the one-dimensional heat flow event assuming that the construction material is homogeneous and isotropic and that the heat scatters uniformly in the room. The novelty in the paper is the standard curve for time–temperature decrease record evaluation, which can be used in a smart building planning procedure for decisions on heat storage and transfer.
Keywords:
conductivity; heat storativity; heat transfer; room; home; innovation; matching procedure; time–temperature record; standard curve

Although the mathematical approach in this section is used already in heat transfer and groundwater movement modeling, its adaptation to heat propagation from a single room is presented in detail. Its connection to smart houses is for numerical calculation of heat storage and transmission features, which can be related to energy consumption and regulation in such buildings. The restrictive assumptions in the model are the uniformity, isotropy and homogeneity of the construction material. For the development of an effective analytical model, a prism model as in Figure 1 is visualized with infinite dimensions, dx, dy and dz.
Fourier (1822) provided a relationship between the material conduction rate and the temperature difference (gradient) in the energy flux direction. He stated that the heat flux, Q (W/m2), due to thermal conduction is proportional to the magnitude of the temperature gradient, which is expressed as follows:
Herein, is the material thermal conductivity (W/mK) and dT/dL is the temperature gradient (K/m) in the direction of heat flow, where L is the length, which might be in x, y or z directions mathematically. Equation (1) is valid in any direction at a fixed time, t, but if the space is fixed and the heat flux changes by time then it is possible to write a similar expression as:
The Fourier law can be combined with the energy conservation principle for forming the heat conduction balance analysis problems.
Under the light of the assumptions that there are no heat sources and that the material is homogeneous, isotropic with constant material properties and without any advection heat velocity, the simplest form of the heat flow equation is given by Berkman et al. [22]. A similar approach has been used for groundwater flow mathematical modeling by Şen [23]. where k is the thermal diffusivity coefficient, which is equal to the multiplication of the material density, , with thermal conductivity coefficient, . where Q(x,t) and T(x,t) are the heat and temperature amounts at distance x and time t. For and , Equation (4) becomes:
The general expression for heat within the wall on one side is: where v(x,t) is the expansion velocity of the heat. After the differentiation of this expression is substituted into Equation (5), then one can obtain:
On the other hand, since the flow is laminar, the Fourier law is applicable, which is expressed as follows: where c is the heat conductivity coefficient. Equations (7) and (8) together represent linear flow towards the wall. The substitution of Equation (8) into Equation (7) yields in terms of temperature drop, s(x,t) as:

The boundary condition and initial conditions for the solution of Equation (9) are as follows: and
The solution of Equation (9) using Boltzmann ([24]) transformation of variables technique is given by: where
The values of for any given value can be taken from normal probability distribution function (PDF) tables, being the normal probability distribution function percentage. In addition, the velocity distribution in the laminar flow pattern case can be found as: where C (a constant) depends on the initial and boundary conditions of the heat flux. Type curve for the planer source can be obtained from Equation (13) by defining dimensionless time factor, u, and wall function W(u) as follows: and
In terms of these new definitions and after some algebraic manipulations, Equation (13) becomes:
The plot of W(u) versus u (a dimensionless time factor) on a double logarithmic grid gives a type curve for the wall. As and , Equation (16) yields that:
This gives a straight line on a double logarithmic grid with slope of 1/2. Equation (18) represents the late portion of the linear heat flux type curve. Consideration of Equations (15) and (16) leads to an explicit form for Equation (18), as follows:
Substitution of Equations (15) and (18) into the expression in Equation (15), after some algebraic manipulation, leads explicitly to the following form:
All of what has been explained above boils down to a standard type curve, as in Figure 1, which shows the change of dimensionless heat function W(u) by dimensionless time factor (u).
In Figure 2 and Figure 3, the late-time temperature fall standard curves are shown on double logarithmic and semi-logarithmic grids, which provide simple usage for the cases of incomplete record evaluation where the early time records are missing.

For the application, one of the rooms in a building was heated up to a high temperature and then the heating source was stopped. Starting from the stop time, the records of temperature were taken at a set of predetermined time durations. Logically, the decrease in the temperature by time appears in Figure 4 as similar to Figure 2, where the temperature decrease appears in a decreasing form, which reflects the actual time–temperature variation situation in the room after the turning off the heating source. It has to be remembered that the test conditions require homogeneity, isotropic uniformity and room air without any ventilation. These conditions should be available at experimental room in this case its dimensions are: floor area equal to 3 × 5 = 15 m2; room height equal to 2.9 m; room volume as 3 × 5 × 2.9 = 43.3 m3. The U-value for the concrete room is 2.296 W/m2K.
The same time–temperature record decrease is given in Figure 5 on a semi-logarithmic grid, where late-time temperature record change by time appears along a straight line, similar to the theoretical standard curve in Figure 3.
The standard curve in Figure 1 was overlain on the same double-scale recorded time–temperature scatter diagram, and they were shifted on each other such that the corresponding axes are always parallel to each other until the best match was obtained between the theoretical standard curve and the data scatter points, which led to Figure 6. For the numerical solution, a match point was selected on the common area of the two graphs, which is shown by M (match point) in Figure 6. The next step is to read from this figure two theoretical standard curve values, namely WM(u) = 0.0281 and, on the horizontal axis, uM = 1.3. The corresponding values on the data sheet axes are T = 10−1 °C and matching time, tM = 103 min. The substitution of these values into Equations (19) and (20), respectively, yields the storativity and heat conductivity coefficients.

Smart home design with full appliances for the comfort of residents have attracted accelerating interest in the building sector. There are various physically- and data-based methodologies with pros and cons, but the most effectively used methodologies are dependent on the probabilistic, statistical and stochastic approaches, which help to deal with the most complex solutions. The number of analytical models is rather meager in the literature. In this paper, an analytical method is adapted from heat transfer (Fourier heat law) and groundwater movement literature by consideration of energy conversation principles that lead to a heat balance partial differential equation including heat storage and transmissivity coefficients. The solution of the differential equations has been presented in the form of a standard curve on a double logarithmic grid and as straight line on semi-logarithmic grid. The application of the methodology is presented for time–temperature decrease records from a room, where first the temperature is raised to a certain level and then, with heating having stopped, the measurements in the temperature decrease are recorded at a set of predetermined time instances. Logically, the temperature decrease by time appears as a decreasing curve by time, which is similar to the trend of the theoretical standard curve. A match procedure is presented through detailed steps between the standard curve and the time–temperature measurements for the purpose of determining the heat storativity and heat conductivity coefficients. In many papers available in the literature, heat transfer and energy balance combined equations are solved by rather tedious numerical analysis methods; herein, a simple and effective methodology based on standard curves is presented with application steps.

This research has not received funding. 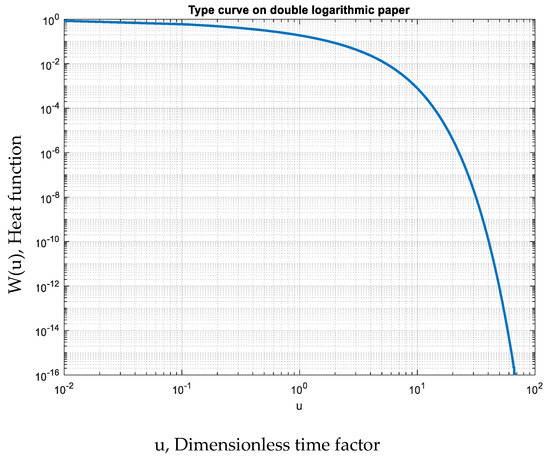 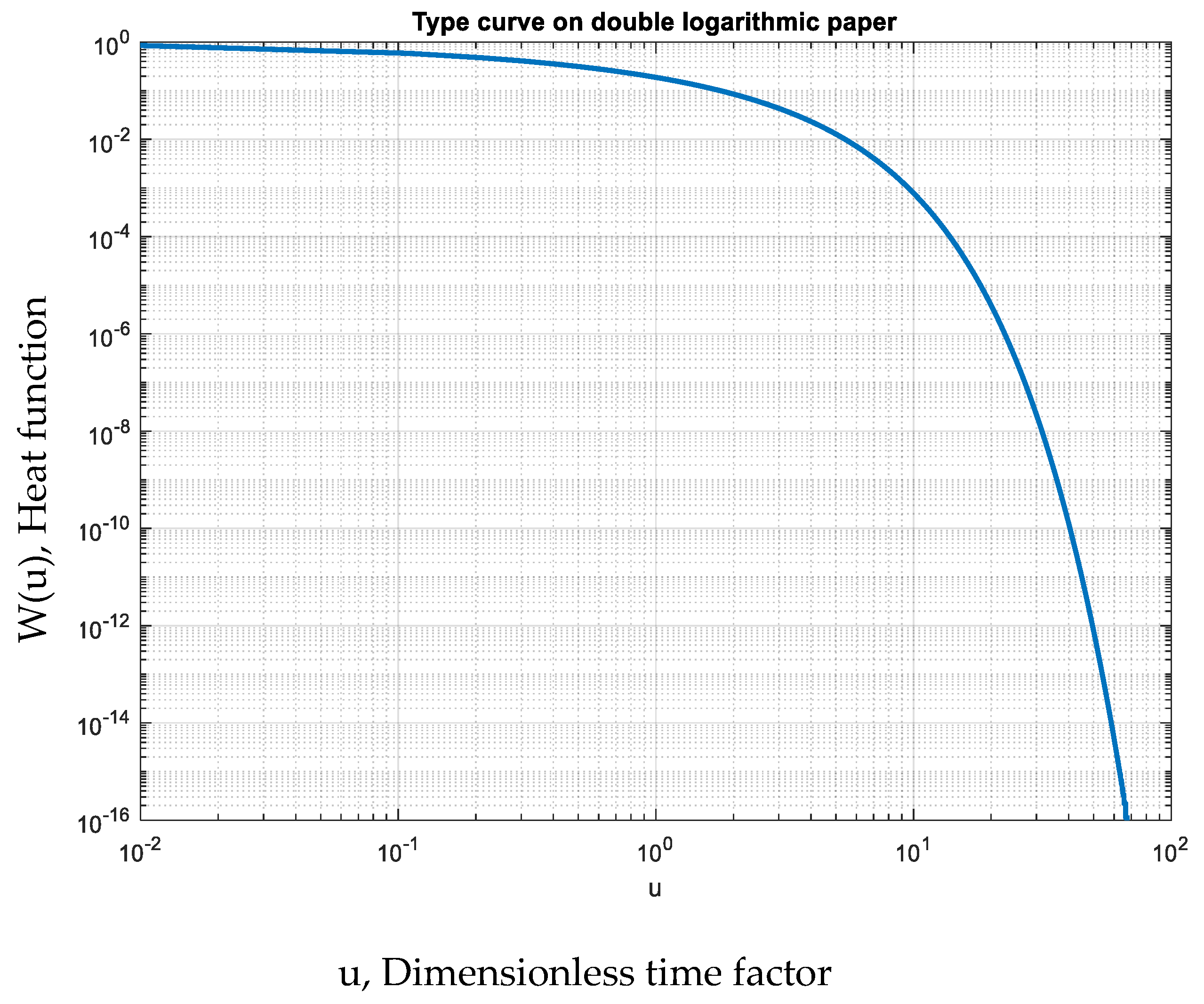 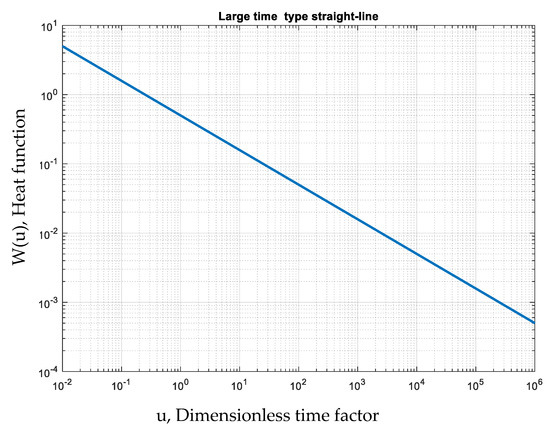 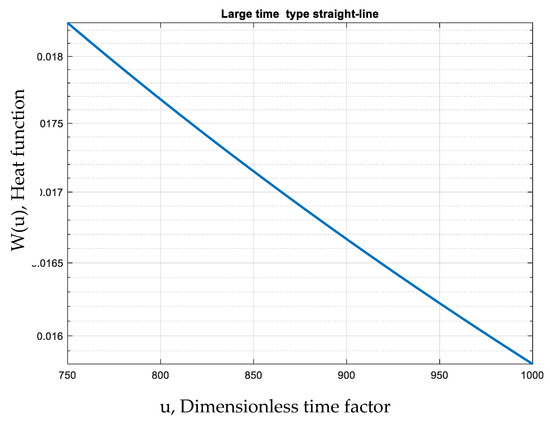 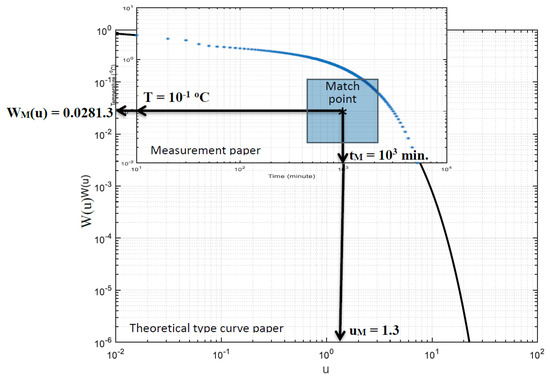 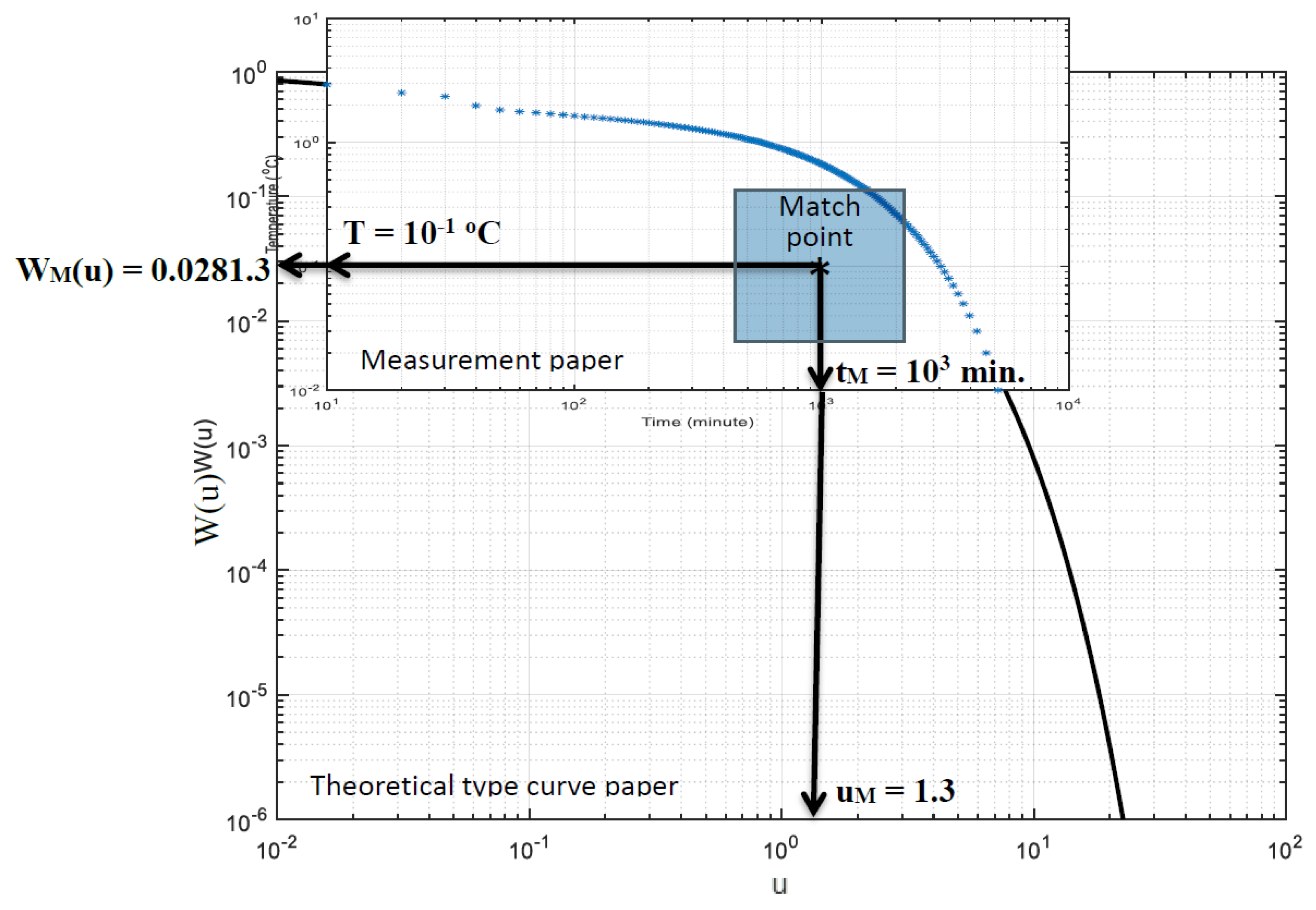