A Flood Risk Management Program of Wadi Baysh Dam on the Downstream Area: An Integration of Hydrologic and Hydraulic Models, Jizan Region, KSA

For public safety, especially for people who dwell in the valley that is located downstream of a dam site, as well as the protection of economic and environmental resources, risk management programs are urgently required all over the world. Despite the high safety standards of dams because of improved engineering and excellent construction in recent times, a zero-risk guarantee is not possible, and accidents can happen, triggered by natural hazards, human actions, or just because the dam is aging. In addition to that is the impact of potential climate change, which may not have been taken into account in the original design. A flood risk management program, which is essential for protecting downstream dam areas, is required. Part of this program is to prepare an inundation map to simulate the impact of dam failure on the downstream areas. The Baysh dam has crucial importance both to protect the downstream areas against flooding, to provide drinking water to cities in the surrounding areas, and to use the excess water for irrigation of the agricultural areas located downstream of the dam. Recently, the Kingdom of Saudi Arabia (KSA) was affected by extraordinary rainstorm events causing many problems in many different areas. One of these events happened along the basin of the Baysh dam, which raised the alarm to the decision makers and to the public to take suitable action before dam failure occurs. The current study deals with a flood risk analysis of Wadi Baysh using an integration of hydrologic and hydraulic models. A detailed field investigation of the dam site and the downstream areas down to the Red Sea coast has been undertaken. Three scenarios were applied to check the dam and the reservoir functionality; the first scenario at 100- and 200-year return period rainfall events, the second scenario according to the Probable Maximum Precipitation (PMP), and the third scenario if the dam fails. Our findings indicated that the Baysh dam and reservoir at 100- and 200-year rainfall events are adequate, however, at the PMP the water will spill out from the spillway at ~8900 m3/s causing flooding to the downstream areas; thus, a well-designed channel along the downstream wadi portion up to the Red Sea coast is required. However, at dam failure, the inundation model indicated that a vast area of the section downstream of the dam will be utterly devastated, causing a significant loss of lives and destruction of urban areas and agricultural lands. Eventually, an effective warning system and flood hazard management system are imperative. View Full-Text
Keywords: dam failure; inundation; flood hazard; management; Baysh; KSA dam failure; inundation; flood hazard; management; Baysh; KSA
►▼ Show Figures 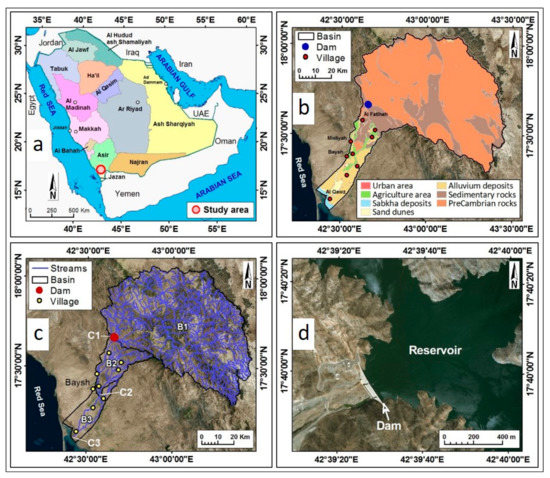