Bootstrap ARDL Test on the Relationship among Trade, FDI, and CO2 Emissions: Based on the Experience of BRICS Countries
Previous Article in Special Issue

Community, Natural Resources, and Sustainability: Overview of an Interdisciplinary and International Literature

Bibliometric reviews are often used to illuminate general patterns in relevant academic literature, including identifying influential scholars, publications, journals, and topics, as well as distinctive scholarly networks. Building on the reviews and meta-studies discussed above, we use some typical bibliometric methods to provide an overview of the research on CBNRM or community-based environmental conservation (CBEC) in this section [26].

Relevant publications were manually collected using keyword searches in the scientific article database Scopus. The research team collaboratively developed search strings, each of which contained two elements: (1) the term “community” or “community-based” and (2) a natural resource-related term (e.g., conservation, environment, natural resource, forest*, fish*, water*, land, wildlife, etc.) Some searches also included an additional term, such as “management” or “co-management,” to limit spurious results. The full list of keyword searches is provided in Table 1.
The keyword strings were searched in article title and keyword fields for all existing publication dates through March 2019. In order to center this analysis on peer-reviewed research articles, the searches excluded editorials, errata, letters, notes, short surveys, and conference papers. Members of the research team individually scanned publication titles and abstracts for relevance and removed results that were not in some way related to CBNRM/CBEC. The resulting lists were then crosschecked between members of the research team, at which time any discrepancies in article inclusion or exclusion were resolved jointly. Ambiguous cases, such as when there was no abstract available or the topic was only tangentially related to natural resources (e.g., community land trusts), were generally included. The final dataset contained 2727 articles from 737 sources, published between 1945 and 2019. We exported the full citation and bibliographic information of these articles from Scopus in July 2019.
Bibliometric analyses were conducted to gain insight into the descriptive features and trends in the CBNRM literature and to visualize journal citation, journal bibliographic coupling (citation of common sources), and keyword co-occurrence networks within that literature. Microsoft Excel was used to conduct descriptive analyses of the number of articles as well as the major publication sources and countries represented in the database. Then, an open-access software tool (VOSviewer) was employed for analysis and visualization of the bibliometric networks. VOSviewer allows for the construction and visualization of various types of bibliometric networks, including co-authorship, citation, co-citation, bibliographic coupling, and the co-occurrence of author keywords (keywords specified by authors).

The complete dataset shows publication trends in the domain of community and natural resource management literature from the earliest relevant publication (1945) to a period of growth in the late 1990s and early 2000s, until a plateau (hovering around 180–200 publications per year) was reached in 2012 and was roughly maintained through 2018 (Figure 1). Additional analysis shows that the most cited publications in the database are primarily from the early to mid-2000s. Major journals, based on the number of articles published on community and natural resource management, included interdisciplinary social science journals and natural science journals, with significant representation of sociology, economics, development, environmental sciences, forestry, and policy (Table 2).
A notable feature of the community and natural resource management literature revealed by this analysis is its breadth in the geographic location of authors. Table 3 lists those countries/areas of author affiliation associated with 20 or more publications. Community and natural resource management literature has been published by scholars from countries around the world, with relatively less representation in North and Central Africa, Eastern Europe, Central Asia, and the Arctic (Figure 2). These areas tend to align with austere geographies, including polar and tundra areas (e.g., Greenland), arid desert regions (Sahara and Kalahari), and mountain ranges (the Greater Caucasus). This map almost certainly underrepresents the geographic extent of this knowledge domain by focusing on the country of author affiliation rather than the country of study. Determining the country of study for each of the 2727 publications was beyond the scope of this analysis but could be a fruitful avenue for future research into the metaknowledge landscape of community and natural resource management.
The citation and bibliographic coupling networks by publication source are visualized, respectively, in Figure 3 and Figure 4, which include 49 sources that had published at least ten community and natural resource management articles. The networks are color-coded based on the average year of publication, with blue representing earlier average publication years (e.g., 2001 for Forestry Chronicle) and red representing more recent ones (e.g., 2015 for Sustainability). The layout of the network illuminates the central roles of several journals, including Society and Natural Resources, World Development, Ecology and Society, and International Forestry Review. These journals are symbolized in green to orange tones, indicating average years of publications in the late 2000s and early 2010s, which likely represent their historical and ongoing publication of relevant literature. Sources with more recent average years of publication may represent newer journals (e.g., Forests, Sustainability) and/or older journals that have only recently published relevant articles included in the database (e.g., Land Use Policy). For this latter group, community and natural resource management may be a domain with which these sources are beginning to intersect. Journals with much earlier average years of publication (e.g., Journal of Arboriculture and Forestry Chronicle) may represent earlier trends in community-based natural resource management (i.e., the dominance of community forestry) or origins of the earlier literature on these topics. The network layout in both maps shows close links among forestry journals, several of which remain distant, in terms of citation relations, from the bulk of the highly networked connections between interdisciplinary social science and natural science journals.
Furthermore, author keyword co-occurrence provides insight into thematic trends in the community and natural resource management literature. These networks can be more illuminating in a comparative context, so the database is divided into two time periods here: 1945–2011 and 2012–2019. The cutoff of 2012 is relevant because that year marked the start of the plateau of publications related to community and natural resources management, potentially signaling the maturation of the domain from a knowledge production standpoint (Figure 1). Figure 5 and Figure 6 display the keyword co-occurrence networks including the top 50 keywords (by link strength) of those that appeared a minimum of ten times during 1945–2011 and 2012–2019, respectively.
Perhaps most significantly, many of the themes in community and natural resource management research appear to have remained relevant across both time periods. The network structure and density of linkages are comparable, and the major themes—community forestry, community-based conservation, community-based natural resource management, and co-management—have had enduring relevance across the history of the research domain.
The two keyword co-occurrence maps show many overlapping concepts or country/region names, such as community, participation, governance, gender, livelihoods, equity, sustainability, Nepal, and Africa. Some terms, however, might have declined in relevance while other new terms were emergent, based on their relevance to one or the other of the time periods as well as the relations between main themes. Land tenure, political ecology, development (and rural development, sustainable development), ecotourism, and poverty alleviation were major keywords in the earlier time period but did not appear within the top terms for the more recent time period. Alternatively, some keywords emerged in the more recent phase that were not previously included—such as ecosystem services, climate change, environmental governance (and forest governance), REDD+, evaluation, collective action, environmental justice, and Latin America. These differences mostly represent newer concepts, methods, policies, and areas of interest within the knowledge domain of community and natural resource management.
Other changes between the keyword networks indicate more nuanced structural and thematic changes. These include the shift from “common property” as a keyword in the earlier period to “common pool resources” in the later period, and the movement of the terms “gender” and “participation” from peripheral placements within the network to relatively more central positions. These developments may be indicative of trends as simple as terminology evolutions or more complex reorientations around key themes and the evolving relationships between them.

The intersection between community and natural resources can be asserted as a shared conceptual center of relevant disciplines that engage in natural resource social science. After several decades’ efforts, community and natural resource research has matured into an established knowledge domain populated by a disciplinarily and geographically diverse field of scholars. While this literature is dominated by studies on various aspects of CBNRM, the present Special Issue showcases multiple thematic areas of research that collectively contribute to a more complete understanding of the community-resources-sustainability linkages. The papers published here highlight several promising directions for future research including: (1) the conceptualization of community and sustainability in natural resource management; (2) the temporal and spatial dimensions of community and environmental processes; (3) the interrelated or nested connections across multiple scales; and (4) special research design and method topics, such as collaborative and comparative field-based studies, longitudinal community survey research, the assessment of community contextual effects, and indicators for community and natural resource sustainability.
Moreover, our bibliometric analysis of the CBNRM/CBEC research provides an informative overview of the intellectual landscape of this field, and pinpoints important gaps in existing meta-analyses and bibliometric reviews. Looking forward, additional research efforts could build upon the analysis here by using bibliometrics to explore other CBNRM subdomains besides community forestry, such as community fisheries or community-based wildlife conservation. There is a fruitful body of work to be pursued in investigating the nuances that may exist between these subdomains. Understanding the convergences and divergences in knowledge production across different realms could ultimately provide opportunities for crosspollination and integration.

The bibliometric analysis included in this editorial was part of a larger research project conducted jointly by students and instructor in a graduate seminar at the University of Missouri-Columbia (RU_SOC 8436 Community, Natural Resources and Sustainability, Spring 2019 Semester). We would like to acknowledge students in that class for their contributions to the project. The research was presented at the Evaluation and Research Methodology session of the 51st Community Development Society Annual International Conference in Columbia, Missouri, USA, July 14–17, 2019. Thoughtful comments from the session participants are sincerely appreciated. We also thank Yubing Fan and Yanu Prasetyo for their helpful feedback on an early version of this paper. 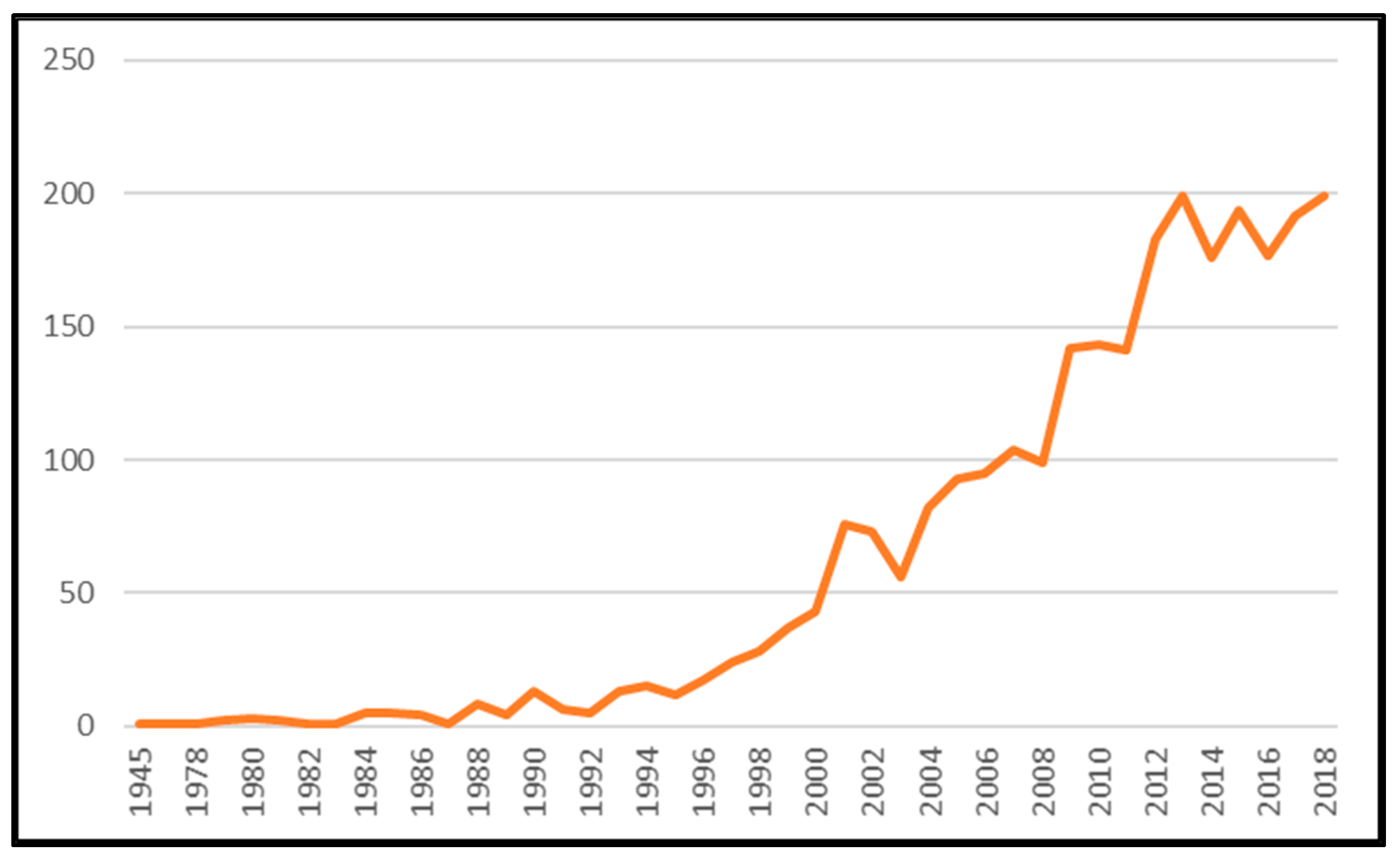 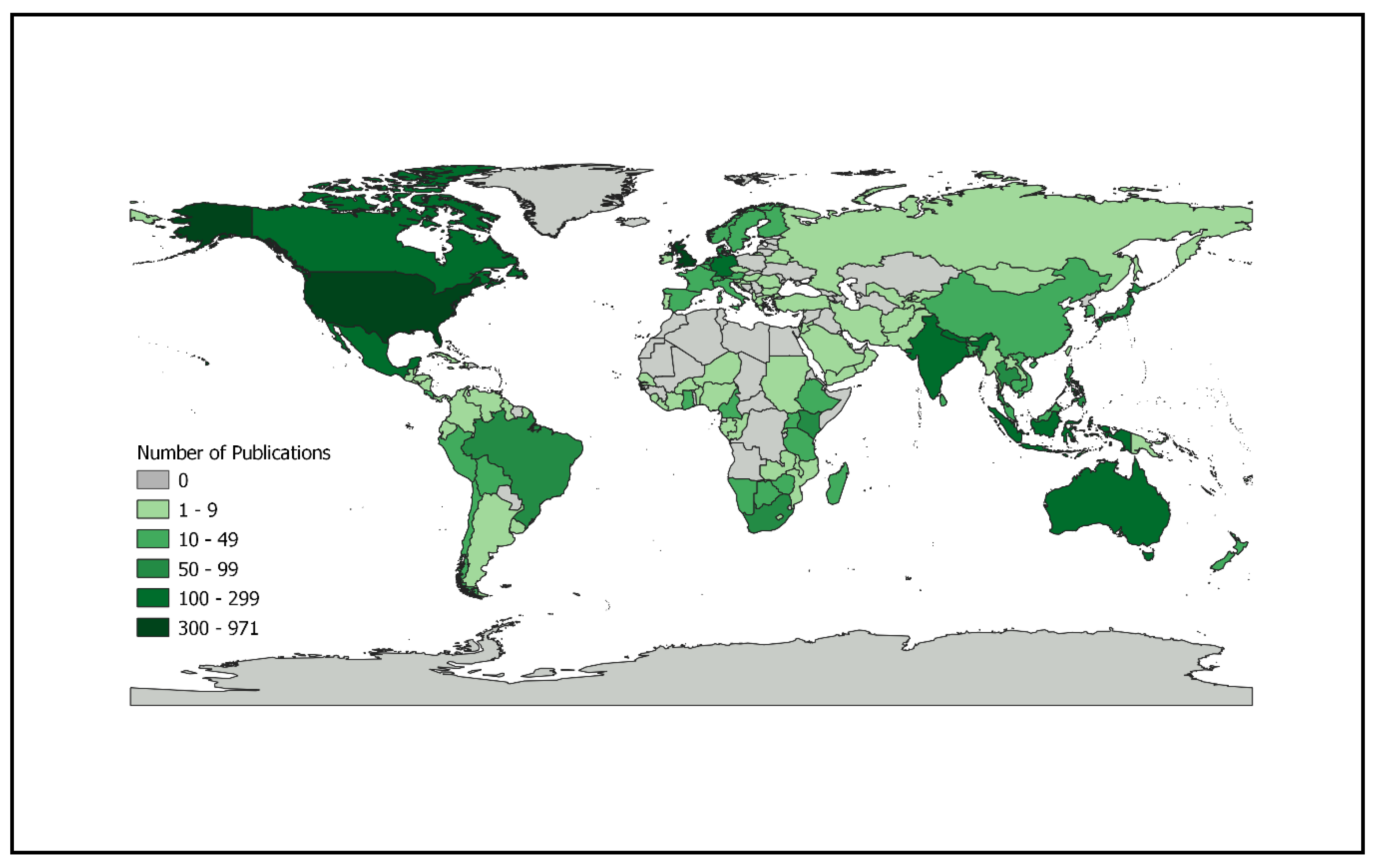 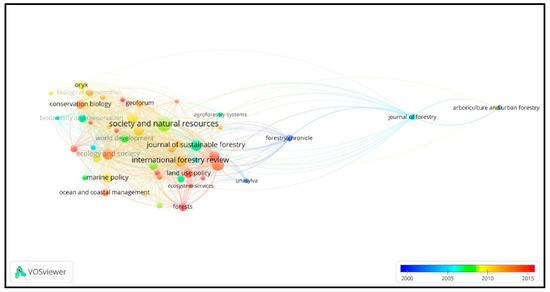 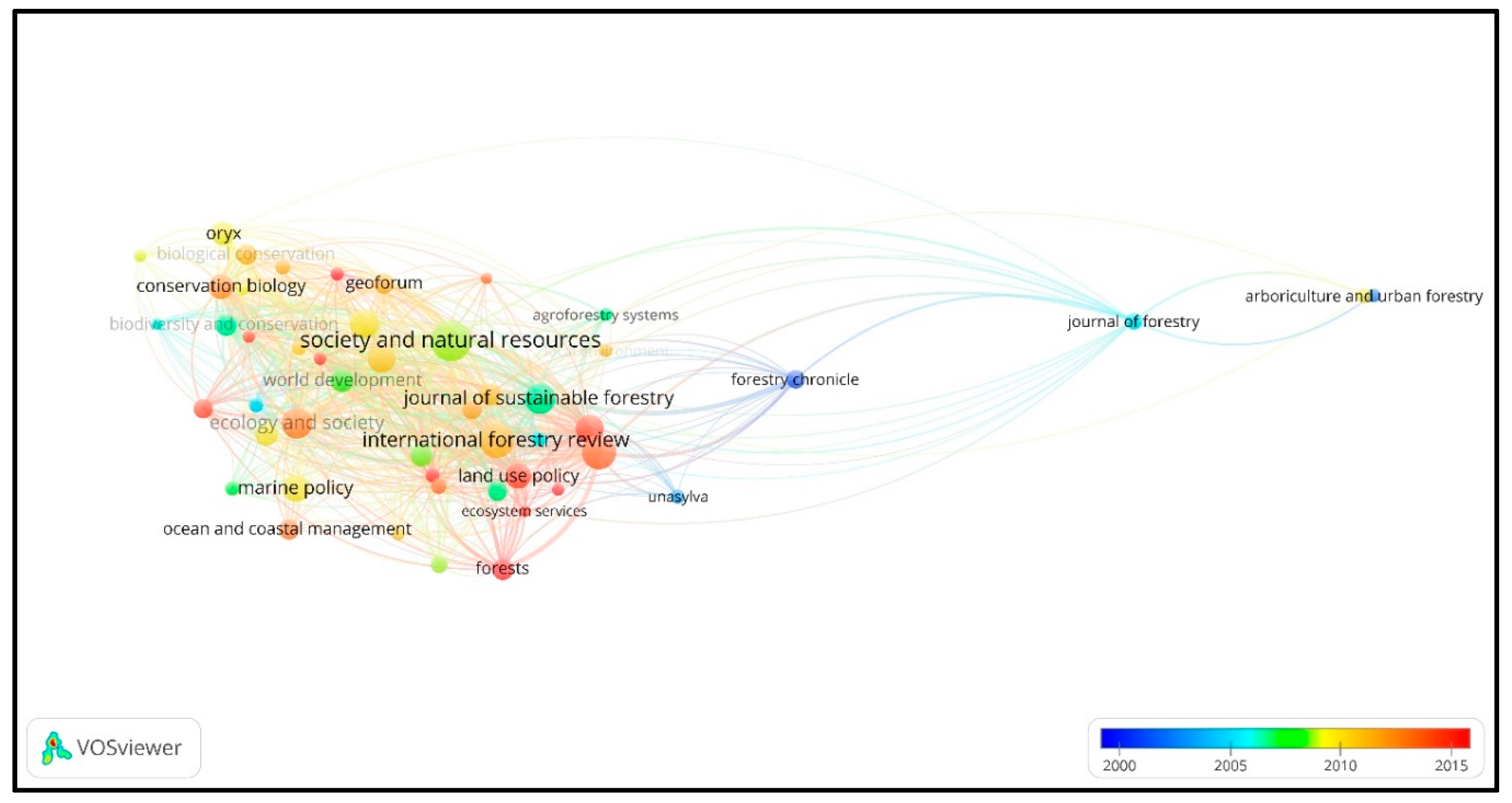 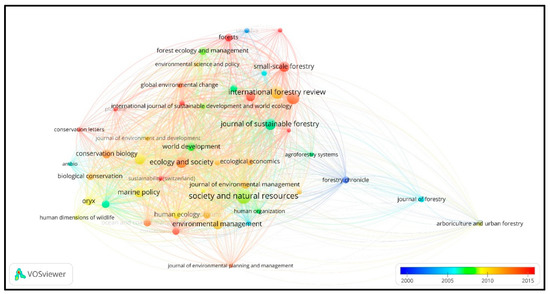 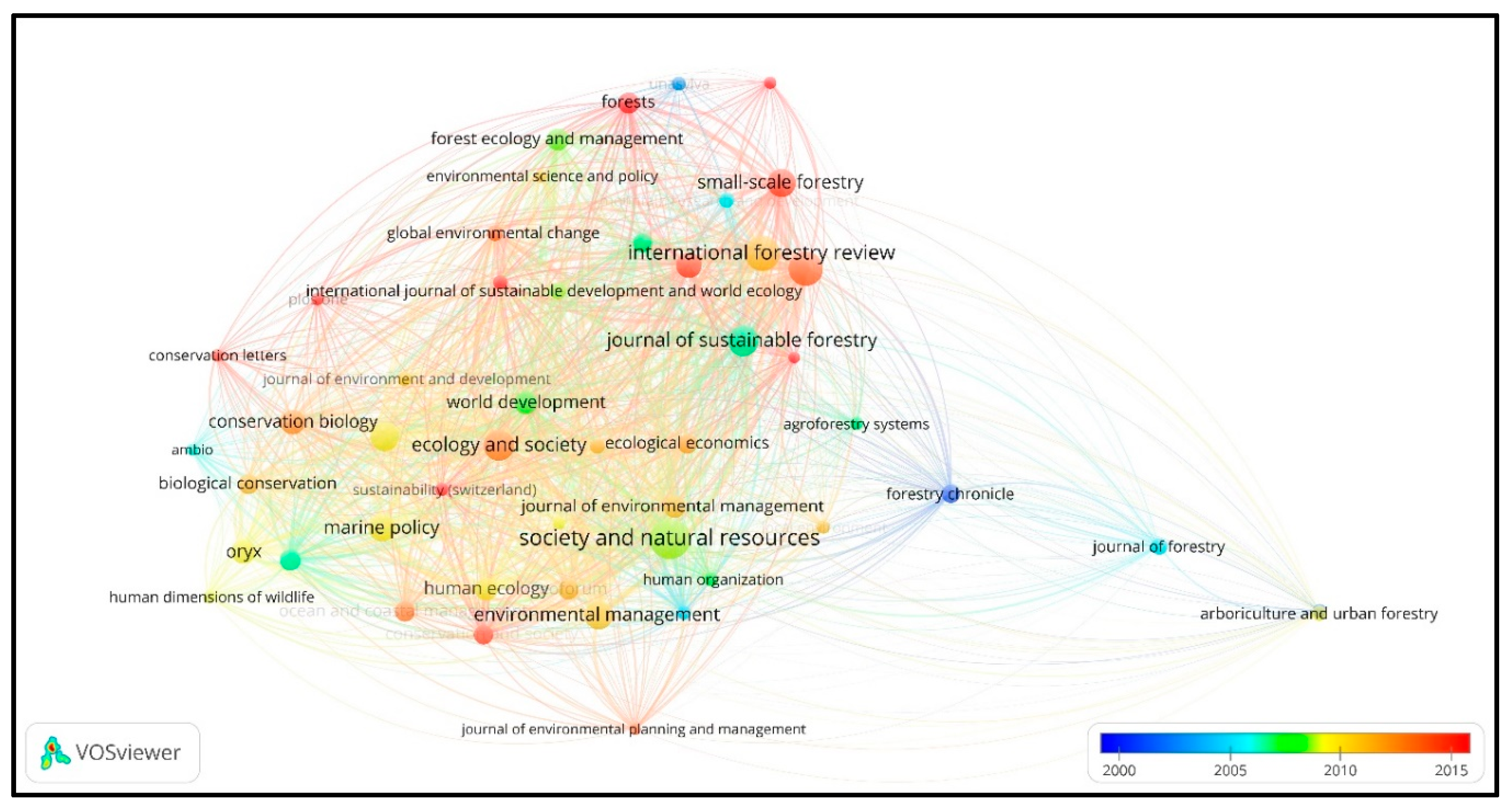 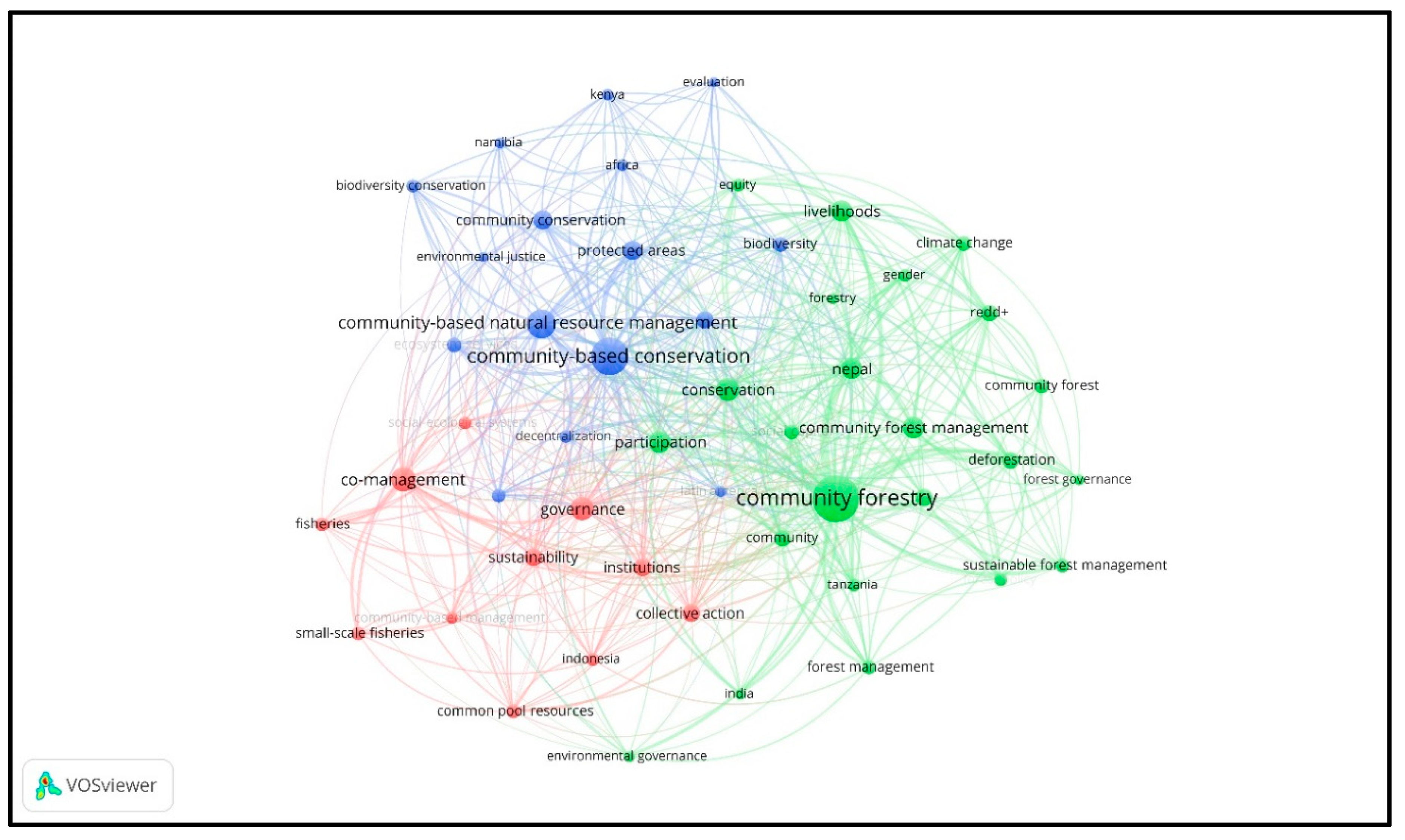 Table 1. Keyword strings for Scopus search.
Table 1. Keyword strings for Scopus search.
1 Editorials, errata, letters, notes, short surveys, and conference papers were excluded from the search. 2 The wildcard symbol (*) represents zero or more non-space characters. 3 The Boolean operator “AND NOT” excludes a term from the search. “Community land model” was found to return irrelevant articles in the search process, and so this phrase was specifically excluded. 4 The Boolean operator “AND” means both terms need to appear in a search field. We included both “co-management” and its variant “comanagement” in the search.