Adding the Mureş River Basin (Transylvania, Romania) to the List of Hotspots with High Contamination with Pharmaceuticals

Background: The Mureș River Basin is a long-term heavily polluted watershed, in a situation of climate changes with decreasing water flow and related decreasing dilution capacity. Here, a mixture of emerging pollutants such as pharmaceuticals were targeted to reveal potential risks regarding the natural lotic ecosystems. Due to the continuous discharge into the environment, pharmaceuticals are gaining persistent organic pollutant characteristics and are considered emerging pollutants. Based on the hazard quotient, this research highlights the dangerous concentrations of carbamazepine, ibuprofen, furosemide, and enalapril in river water. Results: High levels of four pharmaceutical compounds (carbamazepine, ibuprofen, furosemide, and enalapril) and some of their derived metabolites (enalaprilat, carboxyibuprofen, 1-hydroxyibuprofen, and 2-hydroxyibuprofen) were reported in our study in the Mureș River Basin. Overall, pharmaceutical concentrations were found to be highest in the wastewater treatment plant (WWTP) effluent, median downstream of the WWTP, and lowest upstream of the WWTP, as was expected. For all pharmaceutical compounds tested, we recorded concentrations above the limit of quantification (LOQ) in at least one of the sites tested. Carbamazepine exhibited the highest mean values upstream, downstream, and at the WWTP. As expected, the highest concentrations for all the studied pharmaceutical compounds were detected in the WWTP effluent. All Hazard Quotient (HQ) values were below one (on a logarithmic scale in base 10), with the highest values in the WWTP and the lowest in the river upstream of the WWTP. The HQ intervals were in the same range for furosemide, carbamazepine, and ibuprofen at each of the three different sites: upstream WWTP effluent, and downstream. The interval for enalapril stands out as having the lowest HQ at all three sites. Conclusions: Based on these results, the large and complex hydrographical system Mureș River Basin was transformed from a grey area, with little information about pharmaceutical contamination, to a hotspot in terms of contamination with emerging pollutants. Pharmaceutical compound concentrations were found to be the highest in WWTP effluents. The WWTP effluent concentrations were among the highest in Europe, indicating that treatment plants are the primary source of water pollution with pharmaceuticals compounds. The detected levels were higher than the safety limit for carbamazepine and ibuprofen. The determined HQ values imply that the measured levels do pose a threat to the environment for the studied pharmaceuticals. Based on the obtained results, human communities can assess, monitor, predict, and adapt in time to these already-present regional challenges and risks for sustainable use of natural resources, including water and associated products and services. View Full-Text
Keywords: wastewater treatment plants; emerging pollutants water contamination; hazard quotient; carbamazepine; ibuprofen; furosemide; enalapril; liquid chromatography; triple quadrupole mass spectrometry wastewater treatment plants; emerging pollutants water contamination; hazard quotient; carbamazepine; ibuprofen; furosemide; enalapril; liquid chromatography; triple quadrupole mass spectrometry
►▼ Show Figures 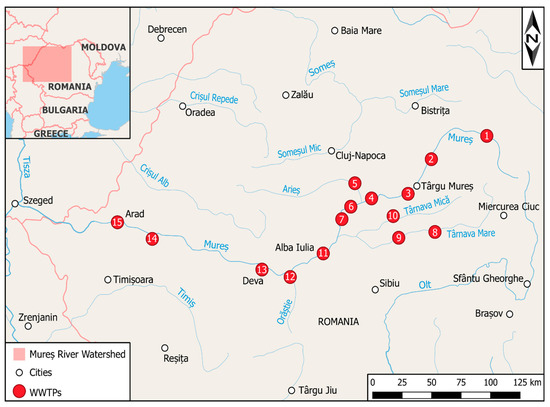