Environmental Flows Assessment in Nepal: The Case of Kaligandaki River

Accurate information about groundwater level prediction is crucial for effective planning and management of groundwater resources. In the present study, the Artificial Neural Network (ANN), optimized with a Genetic Algorithm (GA-ANN), was employed for seasonal groundwater table depth (GWTD) prediction in the area between the Ganga and Hindon rivers located in Uttar Pradesh State, India. A total of 18 models for both seasons (nine for the pre-monsoon and nine for the post-monsoon) have been formulated by using groundwater recharge (GWR), groundwater discharge (GWD), and previous groundwater level data from a 21-year period (1994–2014). The hybrid GA-ANN models’ predictive ability was evaluated against the traditional GA models based on statistical indicators and visual inspection. The results appraisal indicates that the hybrid GA-ANN models outperformed the GA models for predicting the seasonal GWTD in the study region. Overall, the hybrid GA-ANN-8 model with an 8-9-1 structure (i.e., 8: inputs, 9: neurons in the hidden layer, and 1: output) was nominated optimal for predicting the GWTD during pre- and post-monsoon seasons. Additionally, it was noted that the maximum number of input variables in the hybrid GA-ANN approach improved the prediction accuracy. In conclusion, the proposed hybrid GA-ANN model’s findings could be readily transferable or implemented in other parts of the world, specifically those with similar geology and hydrogeology conditions for sustainable planning and groundwater resources management. View Full-Text
Keywords: artificial intelligence; Ganga; groundwater; Hindon; statistical indicators; Uttar Pradesh artificial intelligence; Ganga; groundwater; Hindon; statistical indicators; Uttar Pradesh
►▼ Show Figures 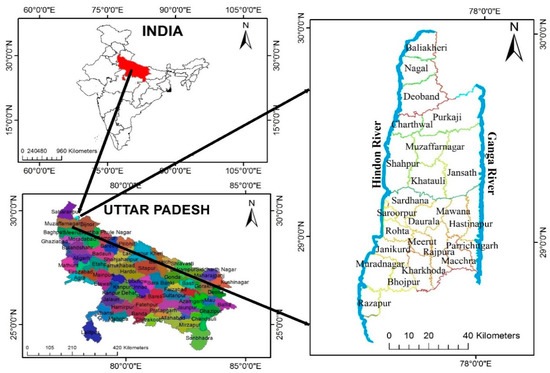