Environmental Impacts on the Performance of Solar Photovoltaic Systems

This study scrutinizes the reliability and validity of existing analyses that focus on the impact of various environmental factors on a photovoltaic (PV) system’s performance. For the first time, four environmental factors (the accumulation of dust, water droplets, birds’ droppings, and partial shading conditions) affecting system performance are investigated, simultaneously, in one study. The results obtained from this investigation demonstrate that the accumulation of dust, shading, and bird fouling has a significant effect on PV current and voltage, and consequently, the harvested PV energy. ‘Shading’ had the strongest influence on the efficiency of the PV modules. It was found that increasing the area of shading on a PV module surface by a quarter, half, and three quarters resulted in a power reduction of 33.7%, 45.1%, and 92.6%, respectively. However, results pertaining to the impact of water droplets on the PV panel had an inverse effect, decreasing the temperature of the PV panel, which led to an increase in the potential difference and improved the power output by at least 5.6%. Moreover, dust accumulation reduced the power output by 8.80% and the efficiency by 11.86%, while birds fouling the PV module surface was found to reduce the PV system performance by about 7.4%. View Full-Text
Keywords: PV system; environment; PV performance PV system; environment; PV performance
►▼ Show Figures 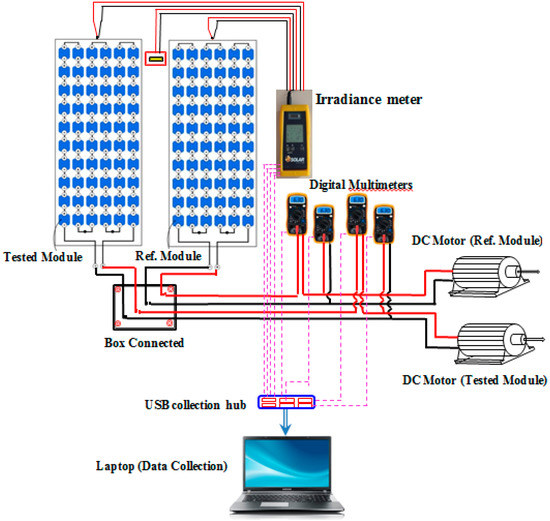