Catalyzing Transformational Partnerships for the SDGs: Effectiveness and Impact of the Multi-Stakeholder Initiative El día después

Alpine Pioneer Plants in Soil Bioengineering for Slope Stabilization and Restoration: Results of a Preliminary Analysis of Seed Germination and Future Perspectives

:
Stabilization of slopes subject to landslide by measures with low impact, such as those of bioengineering, is a topic of interest. The use of scarcely studied alpine pioneer plants could contribute to innovation in soil bioengineering and restoration ecology but to use them, knowledge of the ex situ germinability of their seeds is fundamental. This research analysed the germinability of seeds of nine alpine pioneer species (Papaver aurantiacum, Rumex scutatus, Tofieldia calyculata, Pulsatilla alpina, Silene glareosa, Adenostyles alpina, Dryas octopetala, Laserpitium peucedanoides and Laserpitium krapfii) treated with water, gibberellic acid (GA3) and/or calcium carbonate at room temperature. The seeds had different responses to the treatments: Laserpitium peucedanoides, L. krapfii and Silene glareosa showed difficulty in germinating (germination < 2.5%), while Dryas octopetala had good germination (39–61%) regardless of treatment. GA3 significantly increased the seed germination rate of Papaver aurantiacum, Pulsatilla alpina, Rumex scutatus and Tofieldia calyculata, while the addition of calcium carbonate made the seeds of Rumex scutatus and Tofieldia calyculata germinate more quickly. Results are discussed focusing on the perspectives of using alpine pioneer species in future soil bioengineering work for slopes stabilization and restoration, and on the actions that stakeholders should take to make this happen.
Keywords:
alpine species; ecological restoration; limestone screes; native seeds; plant diversity; sustainability

Seeds were sterilised in 15% sodium hypochlorite solution for 5 min [45], then rinsed with distilled water and finally transferred to sterile Petri dishes to avoid the attack of pathogens able to compromise the germination. Three Whatman No. 3 filter paper discs were placed in each Petri dish with 25 seeds placed on top to permit an easy visual control of the germination of each seed. Each Petri dish contained the seeds of a single species and underwent one of the following treatments:
Petri dishes were hermetically sealed with parafilm to prevent evaporation. Four replicas were performed for each treatment; therefore 400 seeds of each species were used for the germination tests.
The concentration of GA3 solution used in these tests is the same as that used in research by [46] and which allowed the greatest seed germination (more than 90%) of two basophilous species endemics in the Italian Alps. The CaCO3 concentration used is the amount that guarantees that water is saturated with carbonates at room temperature (18 °C) and forms a carbonate layer in the Petri dish, a simulation of the chemical conditions of water and substrate of limestone screes.
Seeds were incubated for 50 days in a germination chamber (FDM-Series C) in the following environmental conditions: 12/12 h light/dark cycle at 23/18 °C respectively. Every two days the Petri dishes were re-randomised [47] and seeds showing radicle emergence were recorded as “germinated” and removed from the plates.

At the end of the germination tests, the germination percentage (GRP) and germination speed coefficient (GSP) were calculated according to [48]. In detail, GRP was calculated as follows: where ni is the number of germinated seeds in the i time, k is the last day of germination evaluation and N is the total number of seeds in each experimental unit. GSP was calculated using this formula: where Gi is the number of seeds germinated in the i time, k is the last day of germination evaluation and Xi is the number of days from sowing. Both GRP and GPS are expressed in percentage.
For each species a one-way ANOVA test was used to evaluate the effect of the treatments on GRP and GSP. The assumptions of normality of group data and homogeneity of variances had been verified using the Shapiro–Wilk test and Levene’s test respectively. When significant (p < 0.05) effects existed, differences were tested by Tukey’s post-hoc test at 95% confidence level. Finally, the GRP and GSP data of the treatments of each species were analysed using Principal Component Analysis (PCA) in order to highlight the main variables that differentiate them. GRP, GSP and ANOVA were calculated/performed using the “GerminaR” package [48] of R 3.5.2 software [49]. PCA was performed using the “vegan” package [50] of R.

At the end of the germination tests, a fair number of the seeds of each species had germinated except for Silene glareosa, Laserpitium peucedanoides and Laserpitium krapfii. Since only few seeds germinated (less than 2.5% considering all the treatments) for these three species, they were excluded from the statistical analyses. Figure 1 shows the cumulative germination lines of the seeds of the other six species undergoing different treatments. The graphs show that the germination lines are different from one species to another and between various treatments. In particular, some species (Adenostyles alpina, Rumex scutatus and Tofieldia calyculata) present, at least for some treatments, germination lines that tend to increase gradually, while other species (Dryas octopetala, Papaver aurantiacum and Pulsatilla alpina) present lines similar to sigmoid curves. The graphs in Figure 1 show that the various species, at the end of the tests, have different germination percentages: only Papaver aurantiacum, Dryas octopetala and Tofieldia calyculata have germination curves of more than 50%. Moreover, for some species (Papaver aurantiacum, Pulsatilla alpina, Rumex scutatus and Tofieldia calyculata) there would seem to be a considerable effect on germination due to GA3.
In Table 1, the one-way ANOVA results show that for most species treatment has a significant effect on GRP and GSP. Only for Dryas octopetala does the type of treatment have no significantly different effect on GRP, nor does it have a significantly different effect on GSP for Adenostyles alpina and Papaver aurantiacum.
Figure 2 shows the GRP values of each treatment of each species and the results of Tukey’s post-hoc test. From the graphs, it can be observed that there is a significant difference between the treatments with GA3 (treatment C and D) and without GA3 (A and B) for Papaver aurantiacum, Pulsatilla alpina, Rumex scutatus and Tofieldia calyculata.
In all these cases, the treatments with GA3 significantly increase GRP, except for the case of Dryas octopetala. Only for Tofieldia calyculata is there a difference between treatments C and D with a greater GRP in C, while for Adenostyles alpina the treatments without GA3 (A and B) are significantly different only compared to D, which is the treatment with the highest GRP value. For no species is GRP significantly different between the control (A) and the treatment with the addition of only CaCO3 (B).
Figure 3 shows the GSP values of each treatment of each species and the results of Tukey’s post-hoc test. Dryas octopetala is the only species that has significantly higher GSP values with treatment A. Rumex scutatus has, instead, significantly higher GSP with treatment B. The same can also be seen for Tofieldya caliculata, although in this case, treatment B led to the germination of very few seeds (Figure 1). Only for Pulsatilla alpina is there a significant difference between the C and D treatments with GSP, which is higher in D.
Finally, Figure 4 shows the PCA biplot in which the species have been grouped according to treatment. Group D is the one with the lowest dispersion of points, which suggests that for this treatment the seeds of the various species responded in a similar manner. The PCA biplot suggests a direct correlation between GRP and GA3 and between GSP and CaCO3, since along the x axis (PC1), GRP increases with GA3 treatment, while along the y axis (PC2), GSP increases with CaCO3 treatment.

This research assessed the ex situ germination capacity of nine alpine pioneer species in order to start to evaluate the feasibility of reproducing seeds and/or plants in an environment different from the one in which they grow in nature for use in soil bioengineering for slope stabilization and restoration. The relevance and novelty of this research is due to the fact the little-known/used species in soil bioengineering and restoration ecology were considered and that the seeds of each of them, although collected from plants with the same ecological requirements and from the same environment (limestone screes of the Southern Alps), had different responses to standardised germination tests. These differences show how it is important to have a deep knowledge of the biology and ecology of plant species with a view to using them for slope stabilization, starting from the baseline of germination. Additional researches should be addressed to investigating this biodiversity asset and will allow better understanding of the life of alpine plants as well as defining their performances in soil bioengineering and possible applications to improve environmental restoration work.

This research was supported supported by FISR-MIUR (“Italian Mountain Lab” project) and Department for Regional Affairs and Autonomies (DARA) of the Italian Presidency of the Council of Ministers (DARA-CRC Ge.S.Di.Mont. agreement).

We would like to thank Nicola Pellizzari and Pietro Giupponi for the help provided in collecting seeds and performing germination tests. 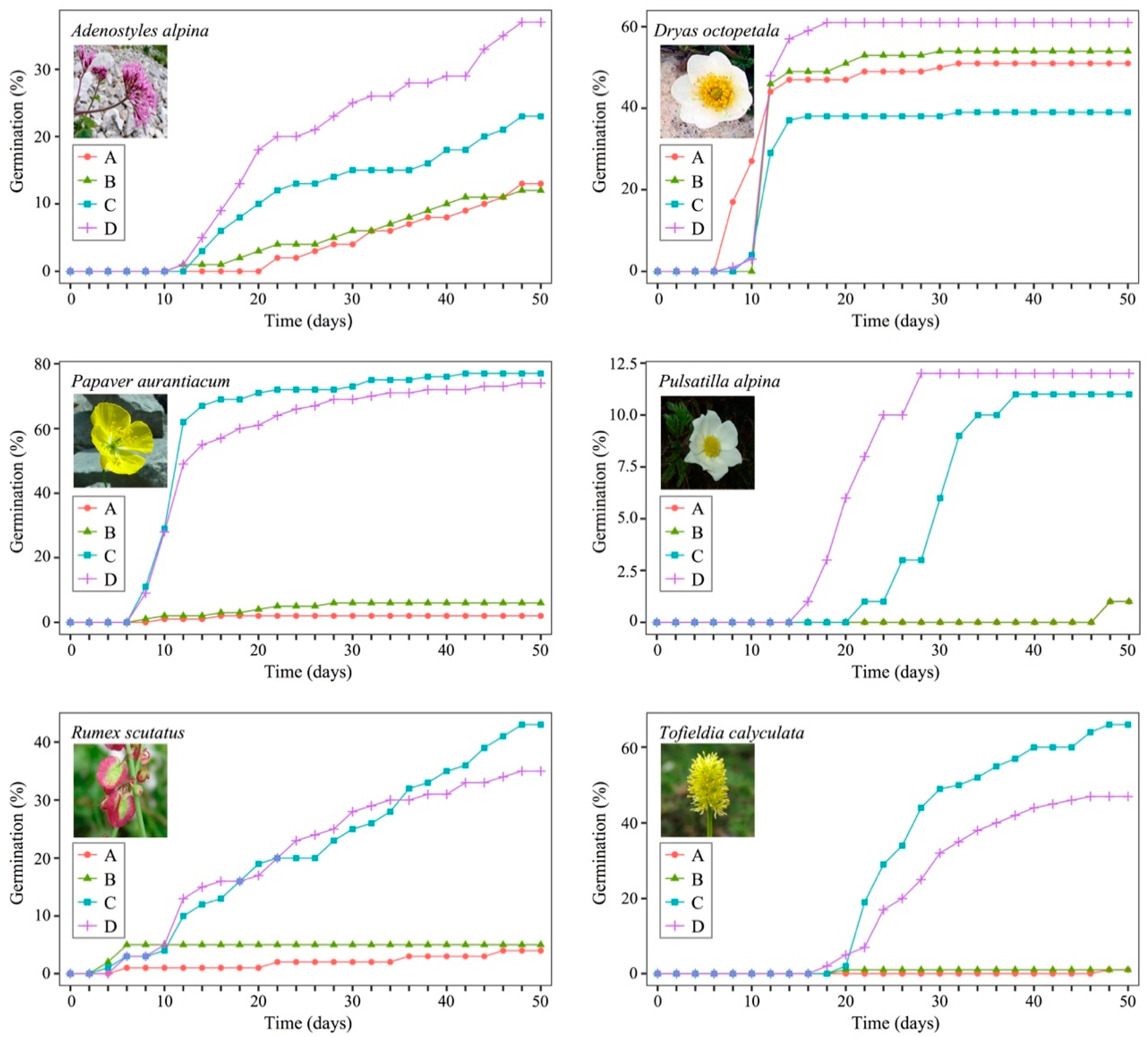 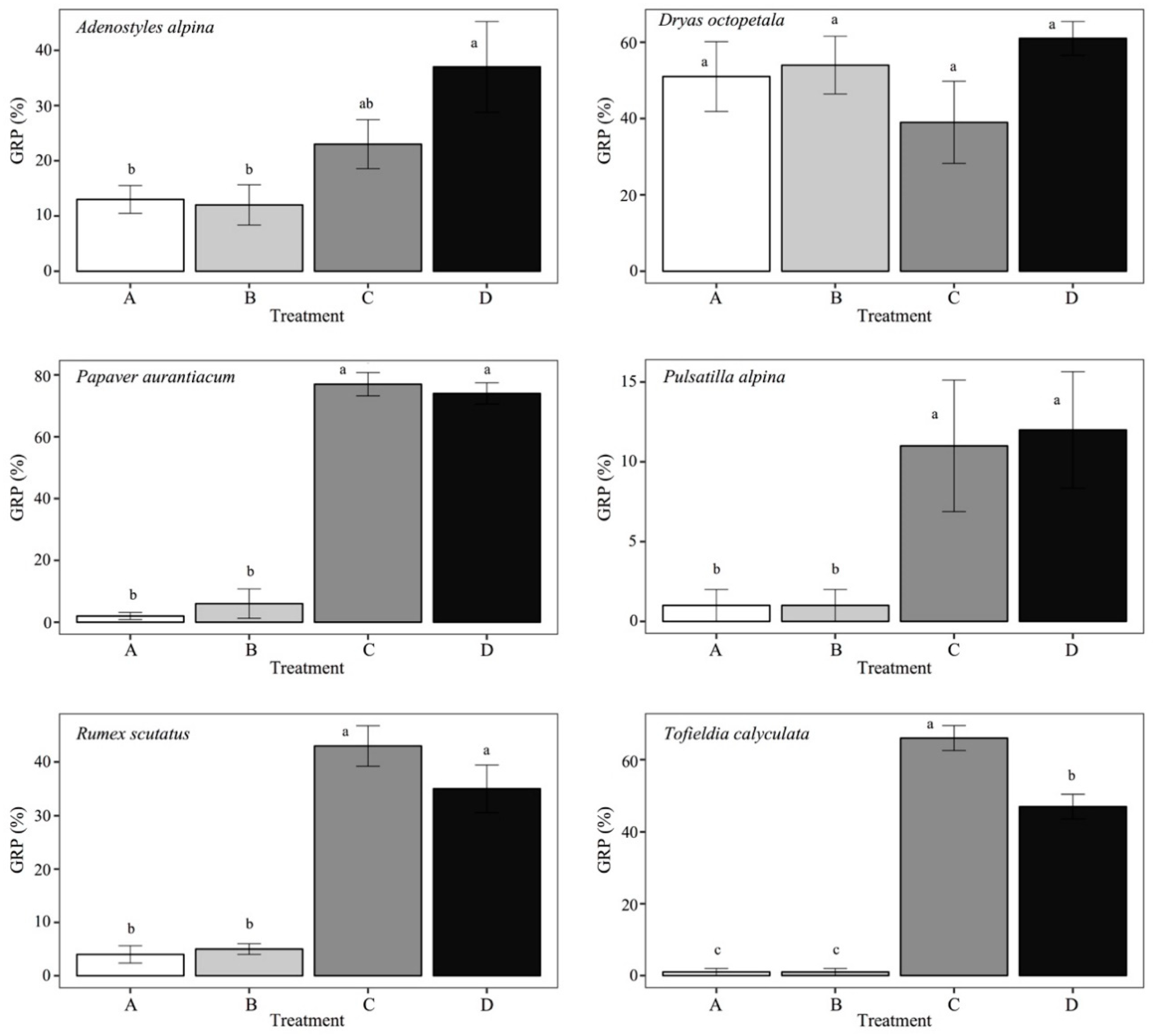 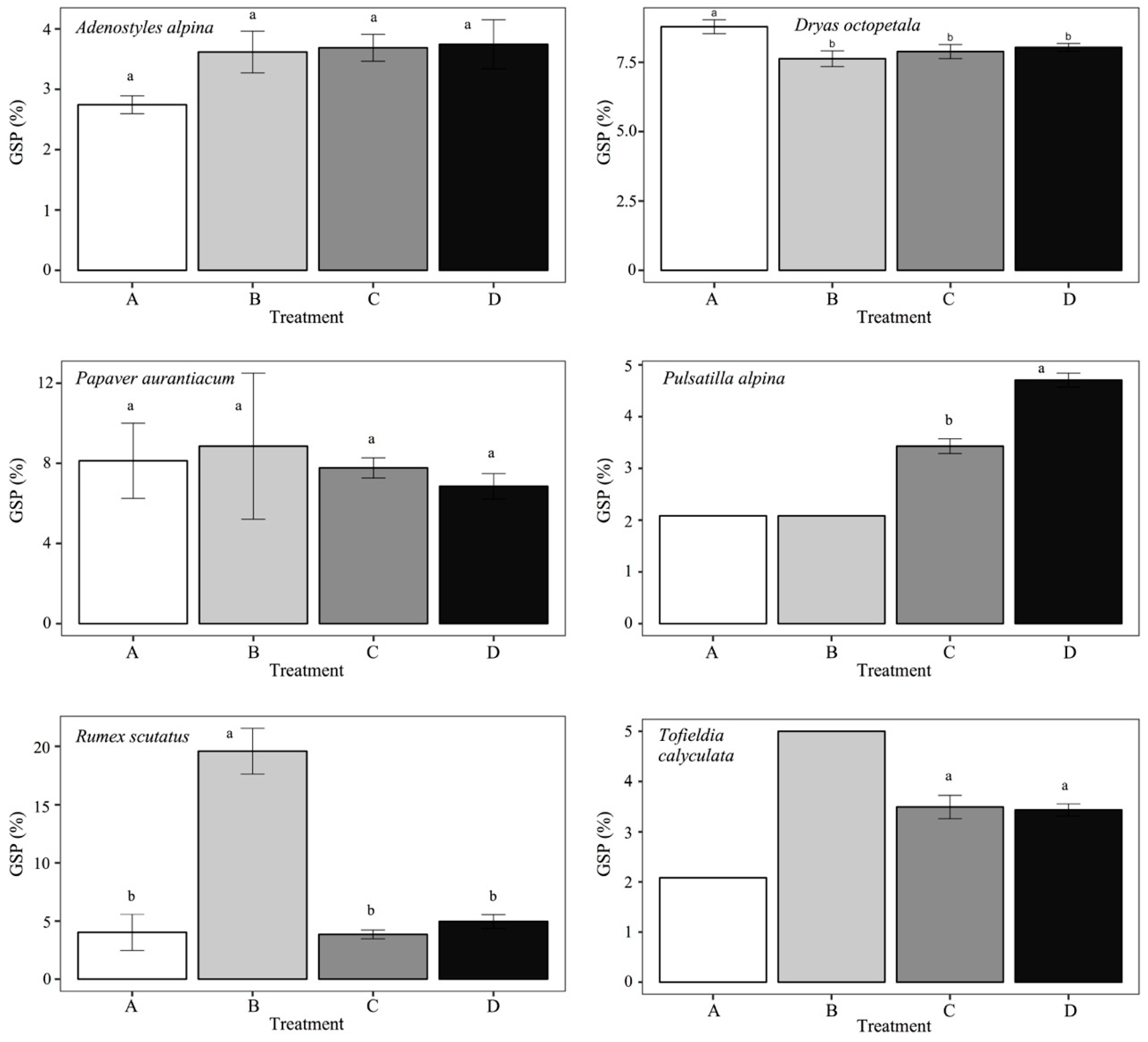 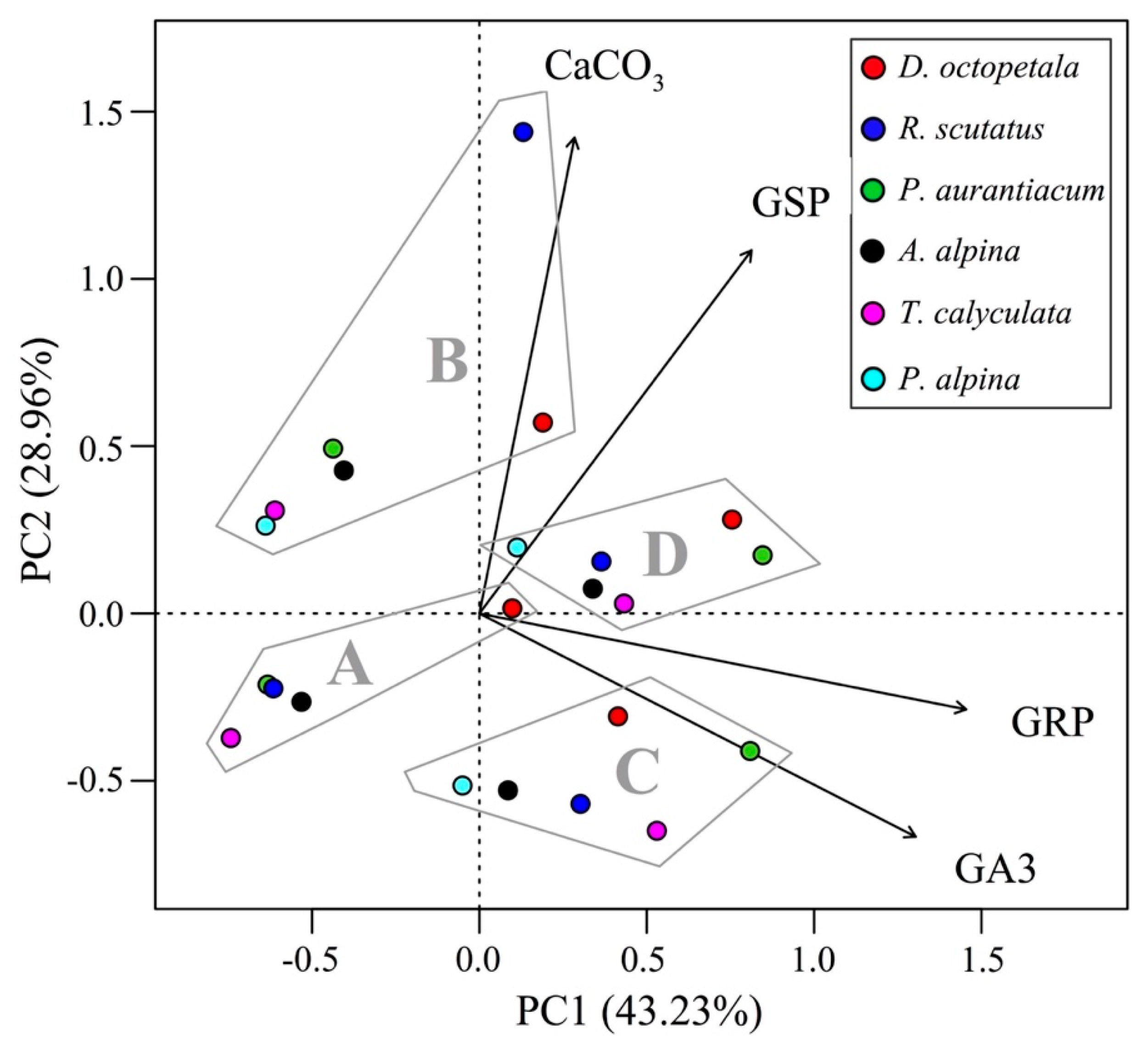 
Giupponi, Luca, and Valeria Leoni. 2020. "Alpine Pioneer Plants in Soil Bioengineering for Slope Stabilization and Restoration: Results of a Preliminary Analysis of Seed Germination and Future Perspectives" Sustainability 12, no. 17: 7190. https://doi.org/10.3390/su12177190


Giupponi, Luca, and Valeria Leoni. 2020. "Alpine Pioneer Plants in Soil Bioengineering for Slope Stabilization and Restoration: Results of a Preliminary Analysis of Seed Germination and Future Perspectives" Sustainability 12, no. 17: 7190. https://doi.org/10.3390/su12177190