4. Description of Data and Variables

The survey used data from the EUROSTAT database. These data covered all the countries of the European Union from 2002 to 2019. The year 2002 was chosen as the beginning of the period under consideration, as this year the European Union reached an agreement with 10 candidate countries, including the Visegrad countries, on their accession to the Union on 1 May 2004. From this year onwards, Eurostat data in the labour market of all 28 Member States are also available. The end of the survey period shall be 2019, the latest year for which this data is available. The variables were accepted as variables:
Of these variables, x2, x3, x4 and x8 are destimulants (minimum value is desirable), x5, x6 and x7 are stimulants (maximum value is desirable), and x1 is a nominant. It was assumed that the nominal value of the unemployment rate is the natural unemployment rate. Different studies indicate different levels of unemployment, the study assumed a natural unemployment rate of 4.5% [48].
The first thing that is to be done is to convert the destimulants and nominant into stimulants. All variables in the study are measured on a ratio scale. For the variable measured on the ratio scale, the destimulant can be converted into a stimulant by calculating its reversal: where: —value of the j-th variable being a destimulant in the i-th object. Calculated on the basis of the Formula (3) the stimulant will also be measured on the ratio scale.
The nominal value measured on the ratio scale can be converted into a stimulant using the following formula: where:—value of the j variable being the nominant in the i-th object, —the nominal level of the j-th variable being the nominant.
Calculated on the basis of the Formula (4) stimulant will be measured on the ratio scale. After applying Formula (3) for variables x2, x3, x4 and x8 and Formula (4) for variable x1, all variables will be stimulants. After converting the destimulant and nominant into stimulants, the maximum and minimum values were selected for each variable. The maximum values of the variables formed a hypothetical country with the best values of the variables characterising the labour market, and the minimum values formed a hypothetical country with the worst values of the variables. The first one will be called the pattern at a later stage of the research, and the second one will be called the anti-pattern. The pattern and the anti-pattern are then added to the set of objects so that it will have 30 observations (28 Member States plus the pattern and the anti-pattern).
The next step is to normalise the variables. Among the available normalisation formulas, the min–max normalisation was selected [45] (p. 526):
The reason for choosing the min–max normalisation is that the normalised variables received with it will be in the range of [0, 1] and will have exactly the same range of 1. The minimum value of the standardized variable will always be 0 and the maximum value—1. Therefore, the values of all variables for the pattern will be 1 and for the anti-pattern—0.
After obtaining a matrix of standardised variables , the next step is to determine the distance matrix between objects (including the pattern and the anti-pattern) using Euclidean metrics and classic multi-dimensional scaling to reduce the number of dimensions from m = 8 to q = 2.

The results of the present research are often concordant with similar, recently performed analyses. Berti, Meyermans [15] clustered the EU countries according to key indicators of the labour market activity rate, employment rate and unemployment rate. The data concerned the population aged 15–64 in 2013. One of the aims of the study was to identify countries similar in terms of the analysed characteristics. They showed that the Visegrad countries were among the countries with the average level of analysed variables together with Belgium, Bulgaria, Estonia, Ireland, France, Italy, Cyprus, Latvia, Lithuania, Luxembourg, Malta, Portugal, Romania, Slovenia, and Finland. The dynamics of the main indicators in the context of the EU labour market indicate that the labour market in the EU as a whole remains tense and varies considerably from country to country.
A deeper analysis of the diversity of the EU labour market was made by Lopes, Quaresma and Moura [50]. The aim of their study was a better understanding of the global EU labour market and capturing its heterogeneity. The authors developed the concept of labour market traction, which consists of a combination of variables from six Eurostat datasets on different topics (i.e., demography, structure of earnings, education and training, living conditions, employment and unemployment and national accounts). Using data mining techniques such as social networks and cluster analysis, they showed that this combined set consistently captured heterogeneity at the national level in the EU, creating well-defined clusters. The authors proved that there was a clear separation between Northern and Western European countries and Eastern European countries. The southern European countries seemed to form a bridge between the two blocks to some extent. Czechia and Slovakia found themselves in a common cluster with a large proportion of adults in the population. Among employed people, people with secondary education prevailed, and the least were those with primary education. Poland was in a cluster with a high percentage of employed older people. On the other hand, the Hungarian cluster was characterised mainly by high poverty rates, low disposable income and low expenditures on higher education.
Other directions of research concentrated on the assessment of the labour market. Research conducted in this field often leads to different results. Rollnik-Sadowska, Dąbrowska [51] clustered European countries in terms of the implementation of labour market policy (LMP) assessed on the basis of input–expenditure on different categories of LMP. Two periods were compared: 2004 and 2014. In 2004, Poland, the Czech Republic, Hungary and Slovakia were among the countries with the lowest public expenditure on LMP. In 2014, after the impact of the crisis on the global economy, the composition of clusters changed, but the Visegrad countries were still among the countries with the lowest expenditures on LMP. The same group included mainly countries of the former Eastern Bloc, but also Luxemburg and the UK. It turned out that countries with the best labour market indicators—the highest employment and the lowest unemployment (e.g., Germany, Denmark, Estonia, Czechia, Luxembourg, the Netherlands, Austria, Sweden and the United Kingdom)—were grouped in different clusters with different levels of spending on LMP. This also contradicts the thesis that countries with higher employment rates are those with higher expenditures on labour market policy, less rigid labour market institutions and product market regulation [52].
It is extremely difficult to compare the situation in different countries according to LMP. The data are not always complete and there are differences in the methods used to collect them. The European Union has not yet developed a common system for evaluating the effectiveness of the LMP. 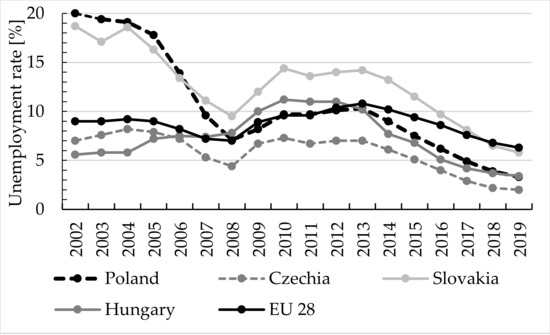 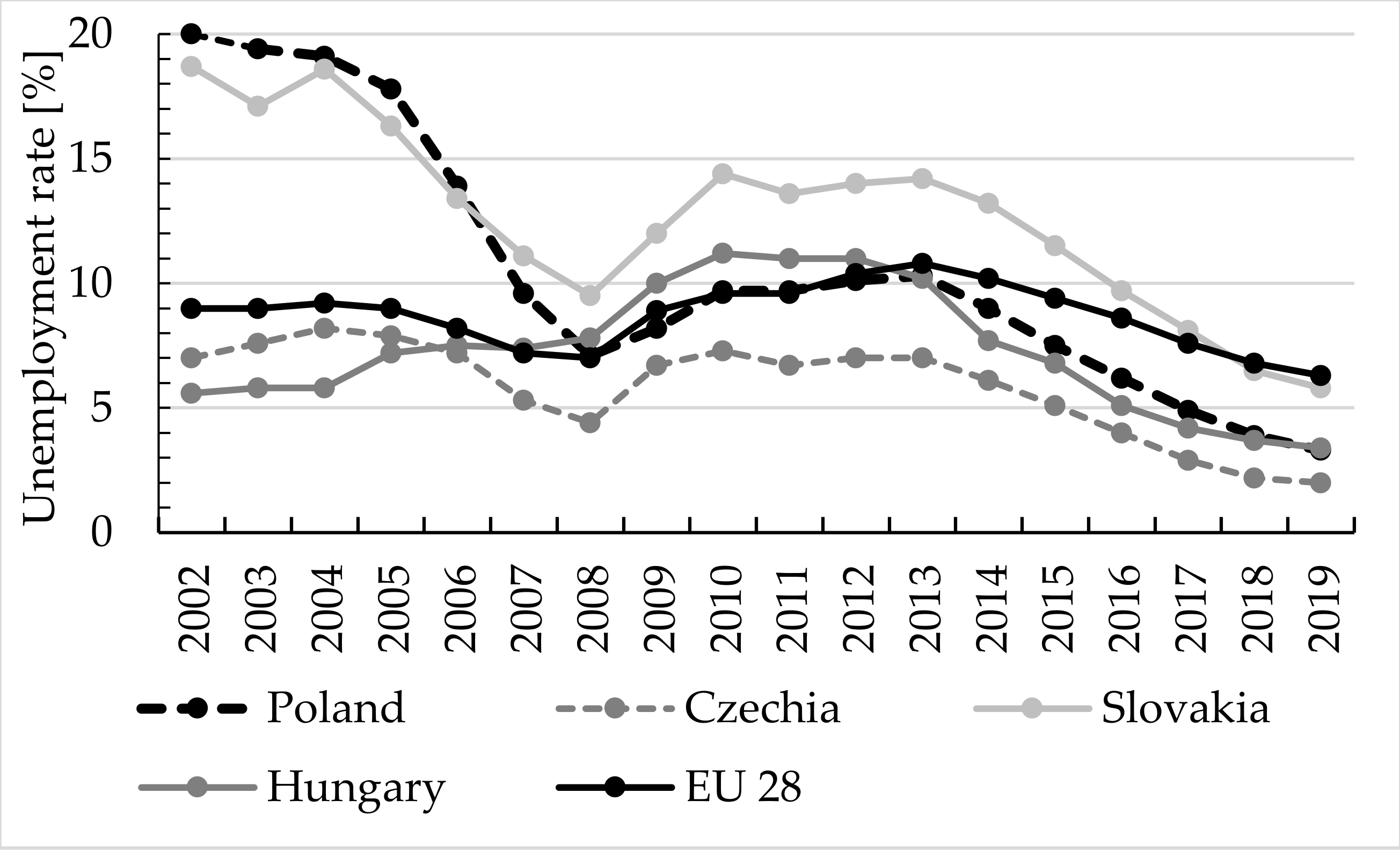 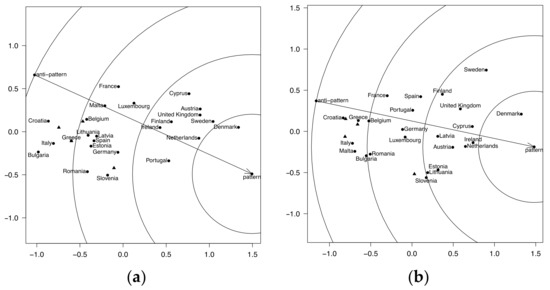 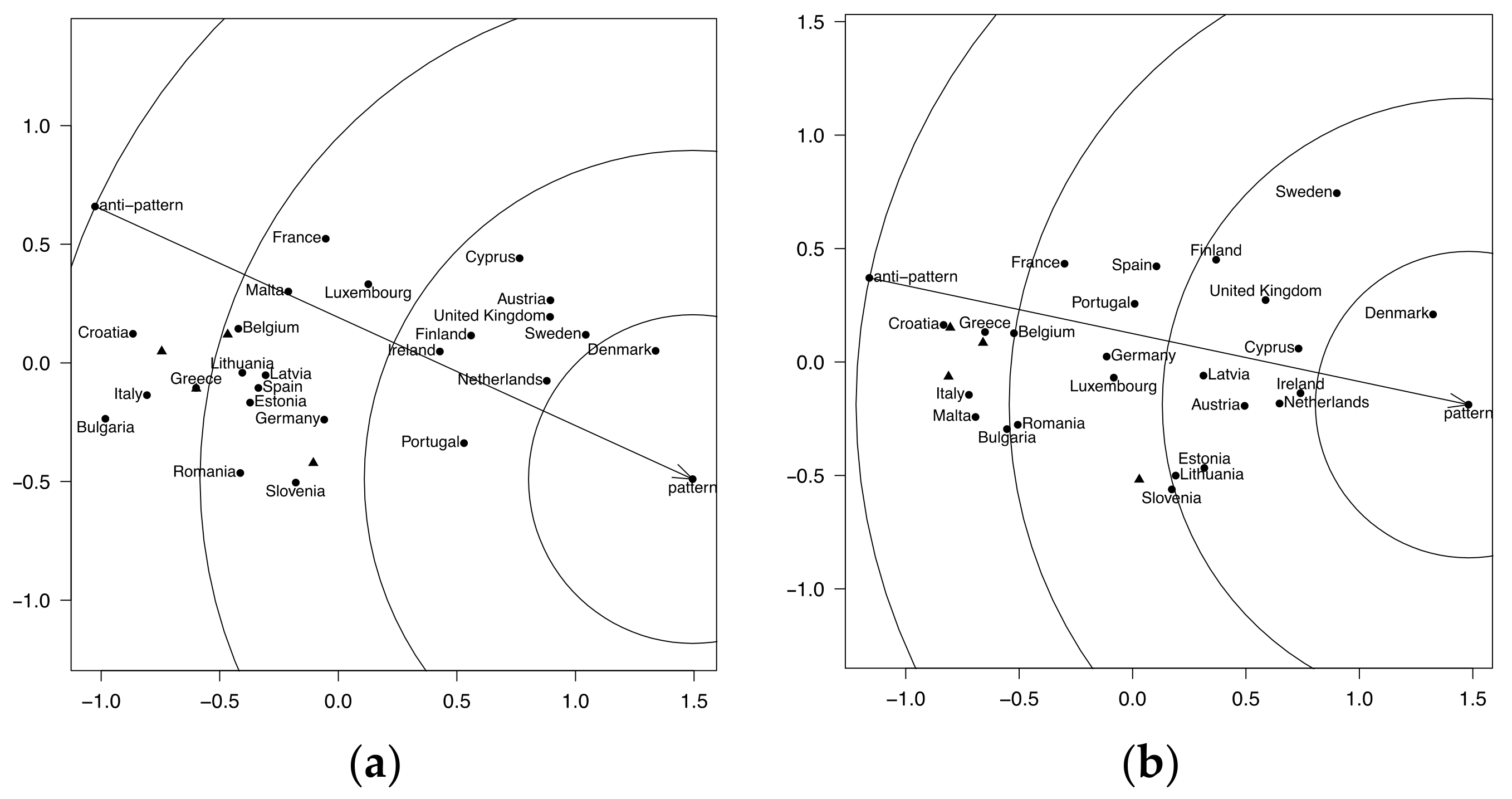 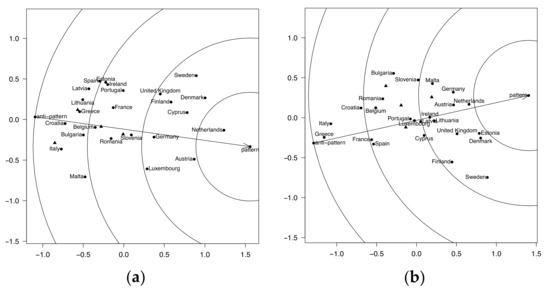 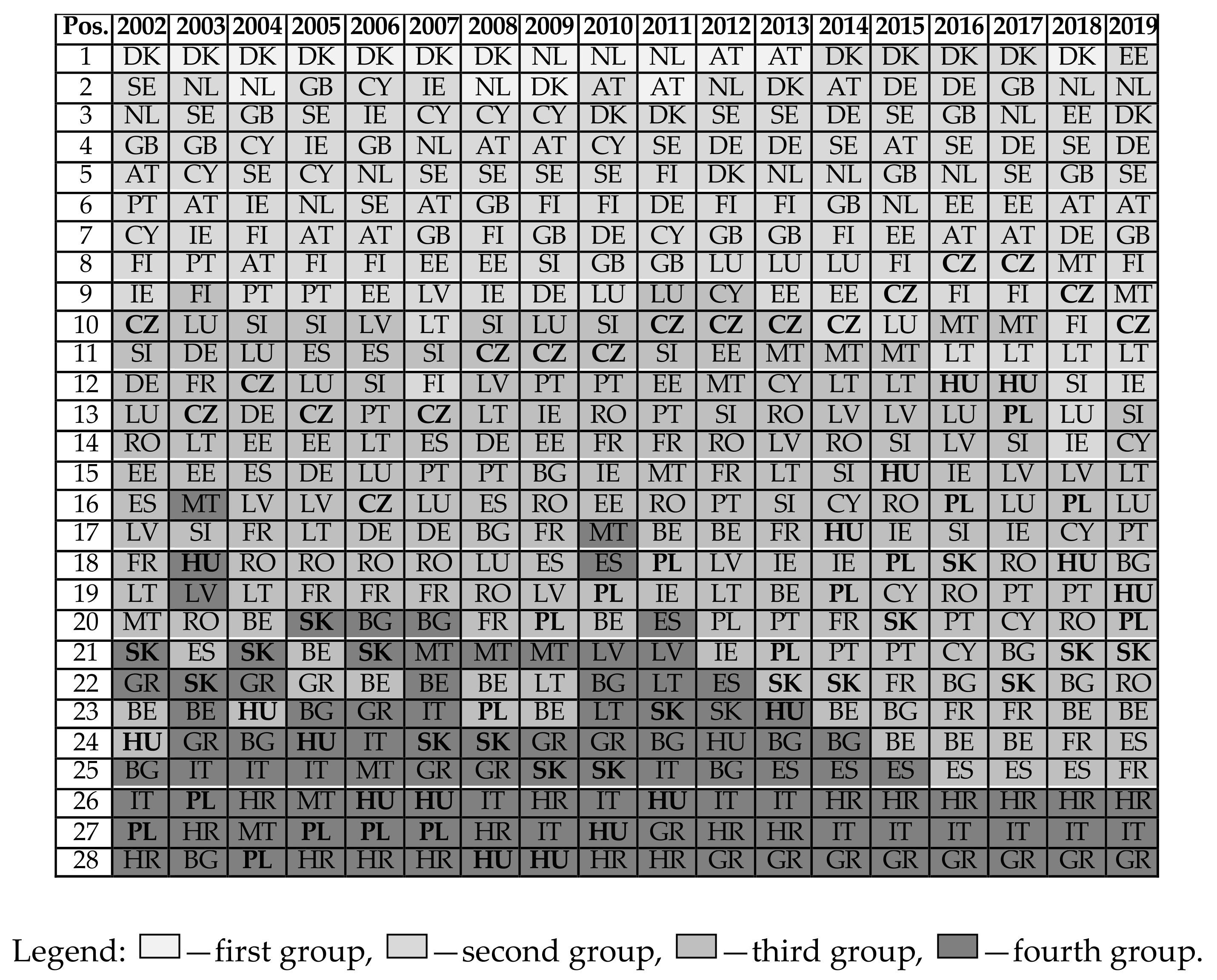