Construction of the Ecological Security Pattern of Urban Agglomeration under the Framework of Supply and Demand of Ecosystem Services Using Bayesian Network Machine Learning: Case Study of the Changsha–Zhuzhou–Xiangtan Urban Agglomeration, China

The GBA consists of 11 cities: nine mainland (Chinese) cities (i.e., prefectures, which are the administrative units directly below the provincial level), namely Guangzhou, Shenzhen, Zhuhai, Foshan, Huizhou, Dongguan, Zhongshan, Jiangmen, and Zhaoqing; as well as two cities that are special administrative regions, which are Hong Kong and Macao. It covers 56,000 km2 and had a resident population of approximately 71 million people at the end of 2018. This urban agglomeration, despite only taking up 0.58% of China’s land area and hosting about 5% of China’s population, was responsible for 12.25% of national GDP in 2018 (China Statistical Yearbook, 2019), making it a focal point of national development strategy.
Environmentally, the GBA is formed from alluvial deposits, with flat plain terrain in the center and hills and ridges in the north and south [25]. The highest point is 1616 m, and higher elevations are covered by subtropical evergreen broad-leaved forest; on terrain that is lower than 100 m, farmland and built-up land predominate (Figure 2). The climate of GBA is humid subtropical with heavy rainfall during the rainy season (from April to September). The annual precipitation is 1300–2500 mm, but the distribution is heavier in the south than in the north [26].
Both geospatial and socioeconomic data were used in our study. Specifically, LULC data in the years 2000, 2010, and 2018 with spatial resolution of 30 m were collected from the Resources and Environmental Scientific Data Center (RESDC) of the Chinese Academy of Sciences (CAS) (http://www.resdc.cn/). Digital elevation model (DEM) data with spatial resolution of 30 m were acquired from the Geospatial Data Cloud (http://www.giscloud.cn/). NDVI data for 2000, 2010, and 2018 were derived from the Moderate Resolution Imaging Spectroradiometer (MODIS) dataset. Soil datasets with spatial resolution of 1 km, including for soil organic carbon and soil particle composition, were extracted from the China Soil Map Based Harmonized World Soil Database (v1.2) of the Cold and Arid Regions Sciences Data Center (http://westdc.westgis.ac.cn). The NTL images in 2000/2010/2018 were obtained from the National Oceanic and Atmospheric Administration’s National Centers for Environmental Information (https://ngdc.noaa.gov/eog/), including the yearly Operational Line-scan System of Defense Meteorology Satellite Program (DMSP-OLS) data and subsequent monthly Visible Infrared Imaging Radiometer Suite (VIIRS) of Suomi NPP satellite with about 0.5 km resolution data. Perennial meteorological data from 2000 to 2018, including daily precipitation, evapotranspiration, and solar radiation, were obtained from the China Meteorological Data Sharing Service System (http://data.cma.cn/site/index.html). Additionally, census and accounting statistics data in the years 2000, 2010, and 2018 were collected from the Guangdong Statistical Yearbook, Hong Kong Annual Digest of Statistics and Macau Statistical Yearbook.

This study focused on three regulatory ecosystem services (water retention, soil conservation, and carbon sequestration) and natural habitat that are of particular importance for the GBA because of their strong relations to dwellers’ health and security, and are sensitive to changes in land use. There are several key reasons for selecting these abovementioned ecosystem services: (1) water is the basis of life, and water scarcity is a serious problem for high population density areas, leading to high consumption rates [27]; (2) soil erosion caused by storm-water runoff threatens city-dwellers’ security, thereby making soil conservation important to the GBA’s population [28]; (3) carbon dioxide (CO2) is the greenhouse gas most relevant to anthropogenic climate change, which has negative impacts on urban areas [29]; (4) extensive urbanization has resulted in a massive loss of natural habitat, threatening the GBA’s biodiversity and socioeconomic sustainability [30].
Water retention refers to the water retained in ecosystems within a certain period. The amount of water retention for each pixel on the landscape was obtained by the equation described as follows, and the required runoff coefficient values were derived from a previous study [31]: where is the total amount of water retention, is the precipitation, is the storm runoff, is evapotranspiration, is the area of the ecosystems as defined by land cover types, is the runoff coefficient, is the index for each ecosystem, and is total number of ecosystems within the given pixel.
Soil erosion reduces soil fertility and aggravates flood problems [32]. The revised universal soil loss equation (RUSLE) was used to calculate soil conservation capacity [33]. The calculation formula of the RUSLE model is as follows: where is the soil conservation capacity, is the rainfall erosivity factor, is the soil erodibility factor, is the topographic factor, is the vegetation cover factor, and is the conservation practice factor (the steps for the calculations are the same as in previous job [18]).
Carbon sequestration refers to the amount of carbon sequestered by terrestrial ecosystems, thereby slowing the rate of increase of atmospheric CO2 [34]. Net primary productivity (NPP) was applied as the key indicator for carbon sequestration, and the Carnegie-Ames-Stanford approach (CASA) terrestrial carbon model was used to estimate NPP [35]. The formula is as follows: where is the absorbed photosynthetically active radiation in a given location and time, and is the light use efficiency in a given location and time.
Human wellbeing can be enhanced and protected by biodiversity, and natural habitat is beneficial to people [36]. Forests, grasslands, and wetlands can provide the abovementioned ecosystem services as well as natural habitat for biodiversity [30], so, their areas were defined as natural habitat.

Population growth, economic development, and built-up land expansion were used to indicate the extent, distribution, and intensity of urbanization [37]. This study proposed an urbanization index which synthesized population density, GDP density, and proportion of built-up land. The entropy-right method was used to determine the weight of three urbanization indexes.
Subdistrict is a relatively independent management unit. This study used 553 subdistricts and towns as evaluation units, and then calculated and standardized the value of those three urbanization indexes. The relative weights of population density, GDP density, and proportion of built-up land were 0.16, 0.59, and 0.25, respectively.
Population and GDP were primarily obtained from census data at the urban or district level, which is bigger than the subdistrict level. It is necessary to rasterize population and GDP to obtain data at the subdistrict and town levels. Many studies have shown that NTL data had a high correlation with population and GDP, and it has been widely used to estimate the spatial distribution of population and GDP [38,39]. Drawing on previous studies, a linear regression model was used in this study to rasterize population and GDP with two widely available datasets (NTL and urban land) for the years 2000, 2010, and 2018 [40,41]. The total NTL were found exhibit R2 values of 0.8699 and 0.68 with economy and population through the regression, respectively, which indicated that NTL has a significant linear correlation to GDP and population.
To understand the ecosystem services response to urbanization in a rural–urban gradient, 553 subdistricts and towns were classified into urban and rural areas. The hot-spot analysis (Getis-Ord Gi*) can identify statistically significant spatial clusters of high value [42]. The optimized hotspot tool in ArcGIS was used to evaluate the spatial variability in urbanization and identify urban areas (hot spots) and rural areas (cold spots and non-significant spots) in the GBA.

2.4. Quantifying the Spatiotemporal Relationship between Urbanization and Ecosystem Services

Considerable differences were found in the spatial distribution and change patterns of natural habitat, soil conservation, water retention, and carbon sequestration (Figure 3). Natural habitat decreased by 915 km2 from 2000 to 2018, 740 km2 in forest, 278 km2 in wetland, while grassland increased by 103 km2. The soil conservation service was mainly distributed in the surrounding mountainous area of GBA, with high vegetation cover and high slope, while it was low in the central plain area. With urban development occupying a growing amount of natural habitat, the average soil conservation decreased from 638.55 t/ha in 2000 to 631.41 t/ha in 2018. Average soil conservation decreased by approximately 5 t/ha from 2000 to 2010, and 2 t/ha from 2010 to 2018. The water retention service was mainly distributed across the southern GBA, which receives a much higher level of rainfall. It was at a low level in Zhaoqing and Huizhou (prefectures in northern GBA), which receive relatively low rainfall. The water retention service was also relatively low in Dongguan, Shenzhen, and Hong Kong because of the high proportion of impervious surface land cover. With the expansion of impervious surface, water retention declined from 2000 to 2018. The GBA’s average level of water retention in 2000, 2010, and 2018 were 5022.5 t/ha, 4793.2 t/ha, and 4721.7 t/ha, respectively. The carbon sequestration service decreased overall from 2000 to 2018. But it increased from 498 t/km2 to 513 t/km2 from 2000 to 2010 because the increased carbon sequestration was mainly distributed in the eastern GBA, while it decreased to 481 t/km2 in 2018.
Concurrently, built-up land increased rapidly, from 5083 km2 to 7979 km2 over our study’s 19-year period. It increased by 2238 km2 from 2000 to 2010 and by 657 km2 from 2010 to 2018. Growth in the cities of Guangzhou, Dongguan, and Foshan was particularly high from 2000 to 2018, with each seeing more than 500 km2 of new built-up land. GBA’s overall population grew from 50 million in 2000 to 71 million in 2018, while the region’s GDP grew from 0.3 trillion US$ in 2000 to 1.64 trillion US$ in 2018. The spatial patterns of population density and GDP were mapped based on linear regression with the NTL data [52,53,54] (Figure 4). Population density and GDP had similar spatial patterns, which both concentrated in the areas around Guangzhou, Shenzhen, and Hong Kong.
The urbanization index significantly increased in all areas from 2000 to 2018 (Figure 5). The highest values were concentrated in the central and southeast, and increased from 0.45 in 2000 to 1 in 2018. The urbanization index decreased from the center to the periphery, and showed an obvious urban-rural gradient. Hotspot analysis showed that urban areas consisted of 127 subdistricts clustered in the economically central cities of Guangzhou, Shenzhen, and Hong Kong, while rural areas consisted of 425 subdistricts or towns scattered across the rest of the region (Figure 5).

3.2. The Relationship between Urbanization and Ecosystem Services in GBA 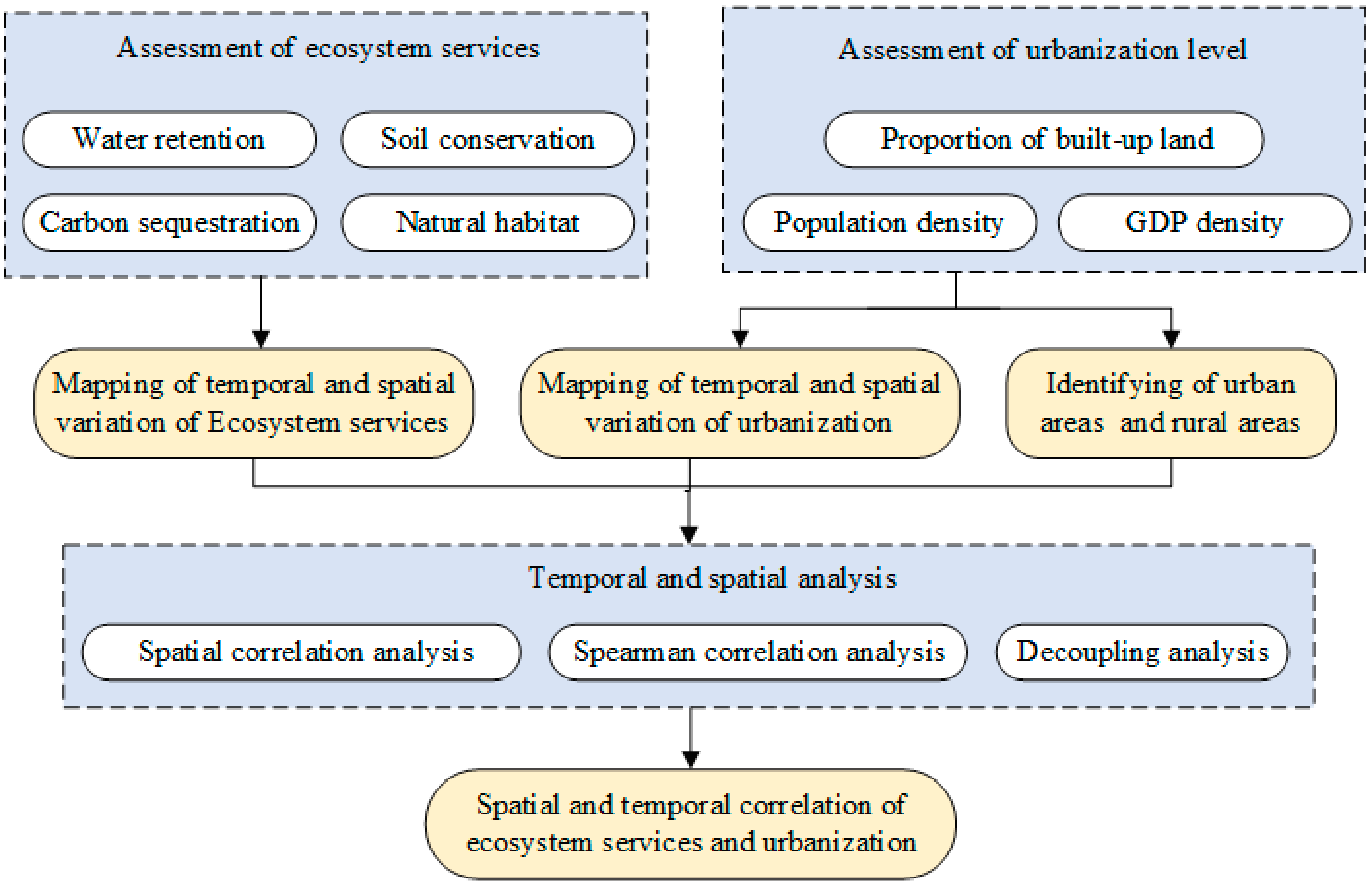 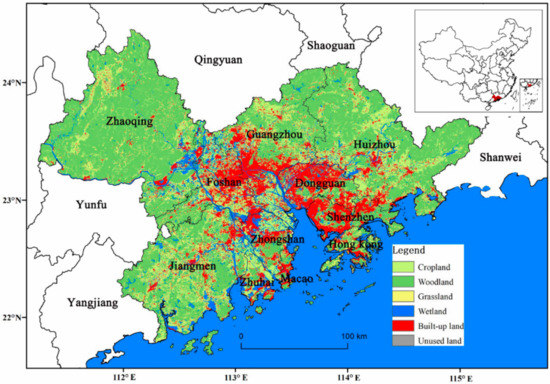 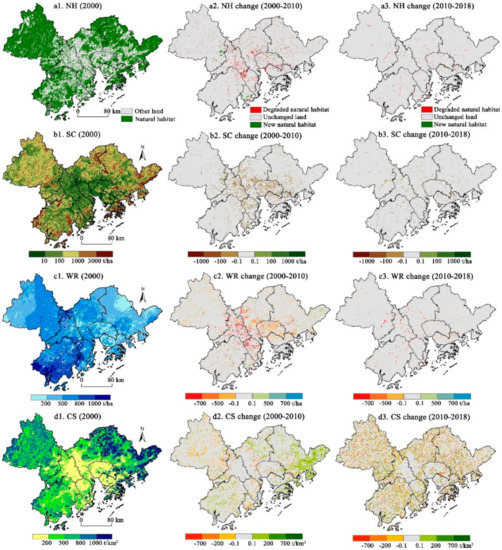 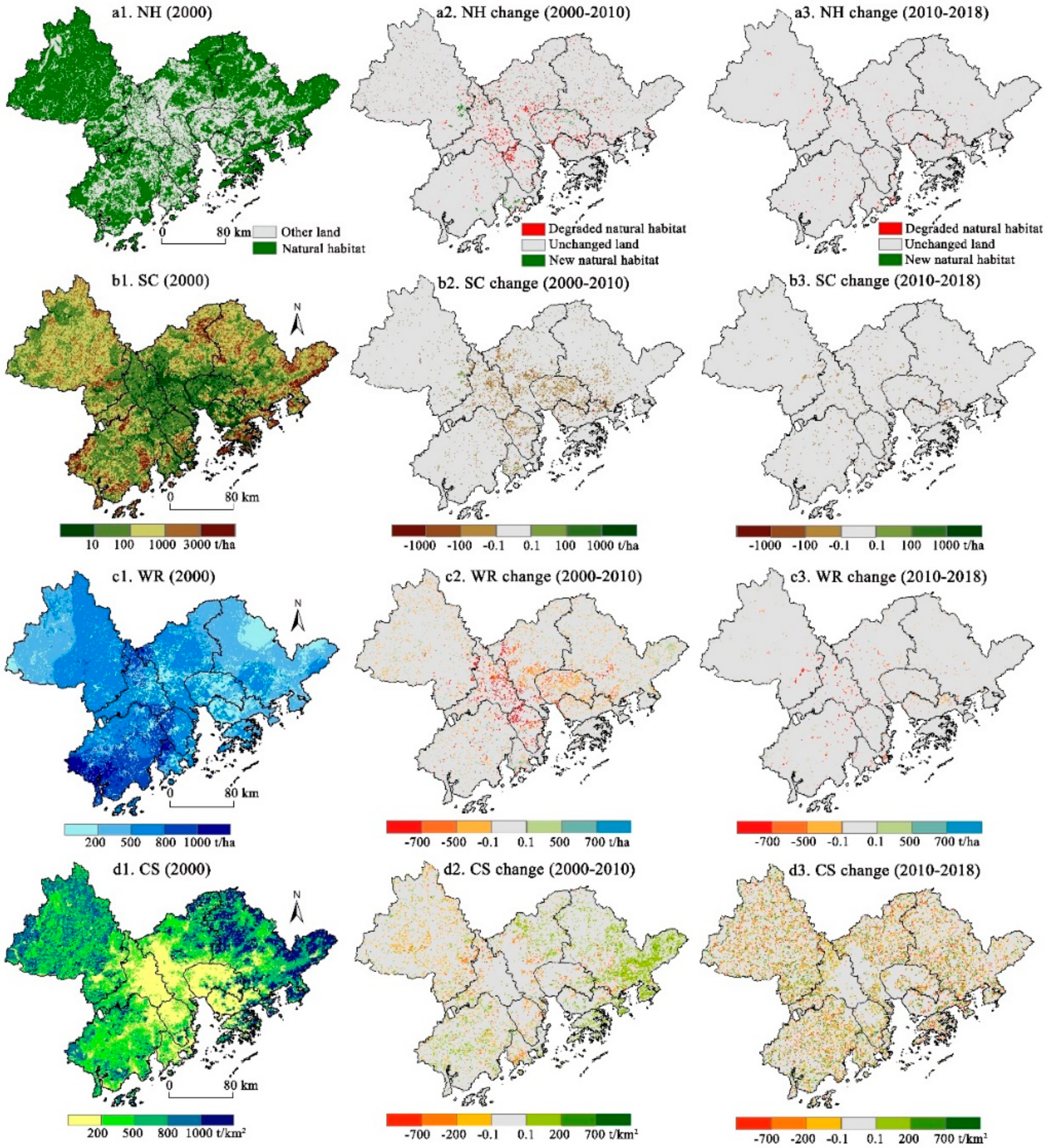 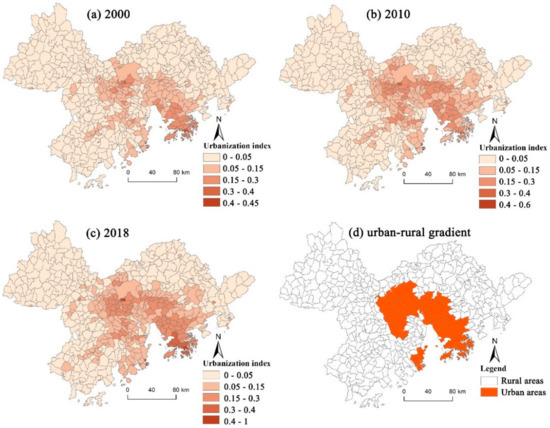 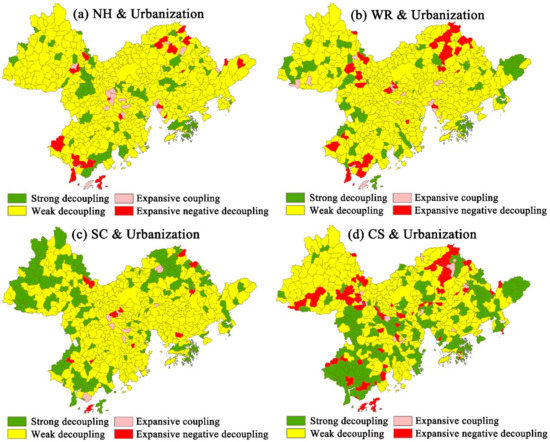