The Role of Women in a Family Economy. A Bibliometric Analysis in Contexts of Poverty
Previous Article in Journal

Protective and Risk Factors for Adolescent Substance Use in Spain: Self-Esteem and Other Indicators of Personal Well-Being and Ill-Being

Connecting Public Policies for Family Farmers and Women’s Empowerment: The Case of the Brazilian Semi-Arid

The role played by women in worldwide food production and food security has reinvigorated debates about the recognition of women’s rights in the rural sector regarding better working conditions and the reduction of gender inequalities. In the 1980s, the social movement in Brazil restructured the politics in the agrarian sector by integrating farmers’ rights and women’s demands. Against this background, the objective of this study is to analyze, through the actors’ perspectives, whether and how the combination of public policies for family farmers affected the socio-economic and political empowerment of women. Our case study covers family farmers from traditional communities located in the Brazilian semi-arid. The results show that women achieved economic stability by participating in public food procurement programmes. In addition, access to cisterns released women from the daily work of collecting water. Women became more involved with political issues, increasing participation in institutions such as NGOs, associations and cooperatives. Among the negative aspects, the study found that the sexual division of labor increased within the household context, and, despite being fundamental for ensuring household food security, women still struggle to have access to the means of production. View Full-Text
Keywords: food system; public policies; fundo de pasto communities; women’s empowerment food system; public policies; fundo de pasto communities; women’s empowerment
►▼ Show Figures 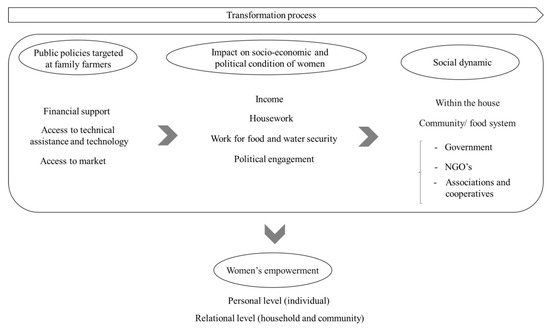