Changes in Sustainability Priorities in Organisations due to the COVID-19 Outbreak: Averting Environmental Rebound Effects on Society

The COVID-19 outbreak has halted economic activities throughout the world [1,2,3], a scenario not seen since the influenza pandemic in 1918. Several countries and territories have instituted lockdown measures for their organisations (e.g., schools, industries, and businesses), suspended travelling, and closed international and state boundaries [4]. Such effects are extremely rare. Even in 2007–2008, when social and environmental concerns were eroded due to short-termism [5], e.g., austerity measures made municipalities less efficient [6], and companies reduced their corporate social responsibility efforts and investment [7], the immediate effects on society were not so severe.
The COVID-19 outbreak has heavily affected the industrial and manufacturing sectors [1]. Global oil demand declined drastically and oil prices fell sharply as industrial and transport sectors came to halt worldwide [1,8]. COVID-19 has had severe negative impacts on human health and the world economy, but it has also led to improvements in the environment due to limited social and economic activities [1,3,9]. Global energy demand declined by 3.8% in the first quarter of 2020, with most of the impact felt in March, and it is expected to decline by 8%, or almost 2.6 gigatonnes (Gt), to the levels of 10 years ago [10]. CO2 emissions decreased by 25% in China and 6% worldwide [9]. The particulate matter concentrations (PM2.5 and PM10) in April 2020 were much lower than those in 2019, suggesting a considerable improvement in the pollution level during the lockdown [4,11]. There has also been a considerable reduction in environmental noise across the world [12], and improvement in surface water quality [4].
The COVID-19 outbreak may be considered as a “blessing in disguise”, where pollution is reducing and nature is reclaiming itself; however, the positive impact on the environment may only be temporary if society does not learn from the lockdown and reduce pollution on the long-term [1].
Recent publications on COVID-19 have been on areas such as basic science, diagnosis, drug and vaccine development, social and economic impact, and public health [13]. Google Scholar [14] and Frontiers [15] data show that research has focussed mainly on medicine and health, particularly through an epidemiological approach, with limited research on sustainability issues, and almost none on organisations.
Organisations are an integral part of modern societies [16,17]. Organisations are affected by forces and conditions that operate beyond their boundaries [18], and at the same time, they still have the ability to react to their immediate environment [19]. In rare cases, unpredictable circumstances, such as the COVID-19 outbreak, affect organisations in unprecedented ways [20]. They, as semi-open (or semi-closed) systems [21], are in continual interaction with their external environment, with constant feedbacks between the organisation and external stimuli [22]. Organisations are connected to larger systems and thus affect the balance of the economic, environmental, and social spheres [23,24,25].
In this context, organisations (civil society organisations (CSOs), companies, and public sector organisations (PSOs)) have been instrumental in contributing to making societies more sustainable [17,26,27,28,29]. Organisations have been focusing more on the economic dimension (almost equally in the short-, medium-, and long-term), than on the environmental and social ones, which tend to be more important in the medium- and long-term (see Figure 1) [24].
Organisations have been developing several initiatives in different areas to promote sustainability [31,32]. For example, companies have been integrating sustainability into their strategic and operational decision-making processes [33], implementing green chemistry [34], using eco-friendly materials, such as green cement [35], and increasing their energy efficiency [36]. Educational institutions have included sustainability in their mission and vision statements [37], reduction of greenhouse gas emissions [38], and water conservation activities [39]. PSOs have also been undertaking sustainability efforts, such as voluntary sustainability reporting based on the Global Reporting Initiative (GRI) Sustainability Reporting Guidelines [40], and environmental reporting practices [41].
Crises, such as the one in 2007–2008 and the current COVID-19 one, can provide opportunities for organisations to better contribute to sustainability (see [7,42,43]).
This paper focusses on how organisational sustainability priorities have changed during the COVID-19 outbreak.

A survey was developed to investigate how COVID-19 has affected organisations and their sustainability efforts. The data collection took place for four weeks starting on 2 April, 2020. The survey was sent in English. The survey consisted of the following sections:
This paper is focused on Section 1 and Section 2 of the survey (the other sections are analysed in other papers currently under preparation).
The survey was sent to a database of 11,657 contacts from different organisations. One reminder was sent out, after which 653 full responses were obtained, i.e., 5.60%. The few non-response items were treated as empty cells in the final database, following Radler and Love [44].
The questions on sustainability priorities were on five-point scale from “Not important” to “Extremely important”. Three statistical analyses have been carried out: (1) Descriptive statistics; (2) a “static” approach, comparing the differences in means in the responses of some groups at a particular time (using the Kruskal–Wallis test), focusing on a particular variable (countries, organisation type, organisation size and years working with sustainability); and (3) a “dynamic” approach, comparing the situation for each group prior to and during COVID-19 and calculating the difference, i.e., the time of the survey. These were done with IBM SPSS 24 [45].

2.1. Limitations of the Methods

The survey was open during the four weeks of maximum lockdown for most countries, which resulted in a lower response rate than typically expected in surveys open for such a long time. The response rate may have also been affected by the limited time available for potential respondents due to other priorities (e.g., airline companies), self-isolation, COVID-19 infection among staff, and staff with children having to stay at home to look after them. Reliability might have been affected by the perception of, usually, one respondent from each organisation, and by issues with understanding the questions (which were only made available in English). The number of respondents (653) may not allow generalisation to organisations worldwide. The generalisability of the results may also be limited due to using a non-random sampling procedure. A non-response bias may be caused by organisations that were contacted but which refused to complete the survey. Generalisability could be improved by a study based on a randomly selected sample drawn from the total number of organisations active in sustainability.

From the sample, 369 of the respondents were male, and 265 were female. The rest selected the “prefer not to say” option. The responses about the type of organisation were 317 from civil society, 138 from corporate/business, and 198 from public sector organisations. The responses about the size of organisations were 82 from 1 to 49 employees, 61 from 50 to 249 employees, 55 from 250 to 499 employees, 65 from 500 to 999 employees, 216 from 1000 to 4999, 159 from more than 5000 employees, and 15 did not know. From the responses, 4.56% of the organisations have been working with sustainability issues less than 1 year, 9.61% between 3 and 5 years, 25.08% between 5 and 10 years, 15.15% between 10 and 15 years, and 30.46% more than 15 years.
The respondents were asked about their sustainability priorities, prior to and during the COVID-19 outbreak. After a descriptive analysis using the whole database, four classification variables were selected to test the differences in sustainability priorities: (1) Organisation type, (2) countries where the organisation has its headquarters or it is based, (3) organisation size, and (4) number of years that the organisations have been working on sustainability. The analyses against “gender” as a variable did not show any statistically significant differences.

A Kruskal–Wallis test was done to test the mean differences among the following six groups in accordance with the organisation’s number of employees (see Table 3): (1) 1–49 employees, (2) 50–249, (3) 250–499, (4) 500–999, (5) 1000–4999, and (6) >5000.
There were statistical differences according to organisation size, especially during the COVID-19, where small organisations were more concerned about economic and environmental issues than the others. Large organisations were more concerned about the social dimension.
The averages for organisation size sustainability priorities were calculated prior to and during the COVID-19 outbreak, and the differences between the two periods were then compared. As Figure 6 shows, organisations of all sizes reduced their environmental priorities during COVID-19 and increased their social priorities. Only the small organisations increased their economic priorities.

The COVID-19 outbreak has affected societies in a way not seen since the influenza pandemic of 1918. This has resulted in negative impacts on economic and social issues, but it is a “blessing in disguise” for environmental issues at a societal level. This paper is one of the first that analyse how the outbreak has affected organisations (as an integral part of societies) and their sustainability priorities.
A survey was sent to almost 12,000 organisations worldwide with the object of analysing their answers in respect of any changes in their priorities due to COVID-19. This achieved a response rate of 5.60% after keeping the survey open for four weeks. The results of the survey clearly show that at this difficult time for organisations, the main priority is to take care of their employees (social issues) and then to survive (economic dimension); however, environmental issues have suffered a negative impact in terms of prioritisation, regardless of organisation type, country where they are based, organisation size, or the time they have been working with sustainability issues. This is in contrast to a normal state of activities, i.e., prior to the COVID-19 outbreak, where such priorities were centred on the economic dimension (as discussed by [27]).
This research highlights that organisations and societies are facing an environmental conundrum, where, for example, air quality has improved and pollution has decreased in societies worldwide, but organisations are starting to neglect such environmental issues. Organisations have to transform crises, such as the COVID-19 outbreak, into an opportunity to better contribute to sustainability (see [7,42,43]), by ensuring that their sustainability efforts undertaken during the last three decades, and in particular for the environmental dimension, are not forgotten. In this way, we will avert environmental rebound effects and ensure that societies and organisations are better coupled to face challenges, such as COVID-19, in the future. This will help to make the world more sustainable for this generation and future ones.
As the COVID-19 outbreak evolves, more research into organisations and their sustainability efforts during this period is needed. Some lines of research could include: Investigating how the outbreak has affected the internal priorities of an organisation (e.g., whether operations or management have been more affected); analysing differences across continents; linking governmental decisions and those of organisations; and comparing the benefits and challenges of moving towards a more digitised world. 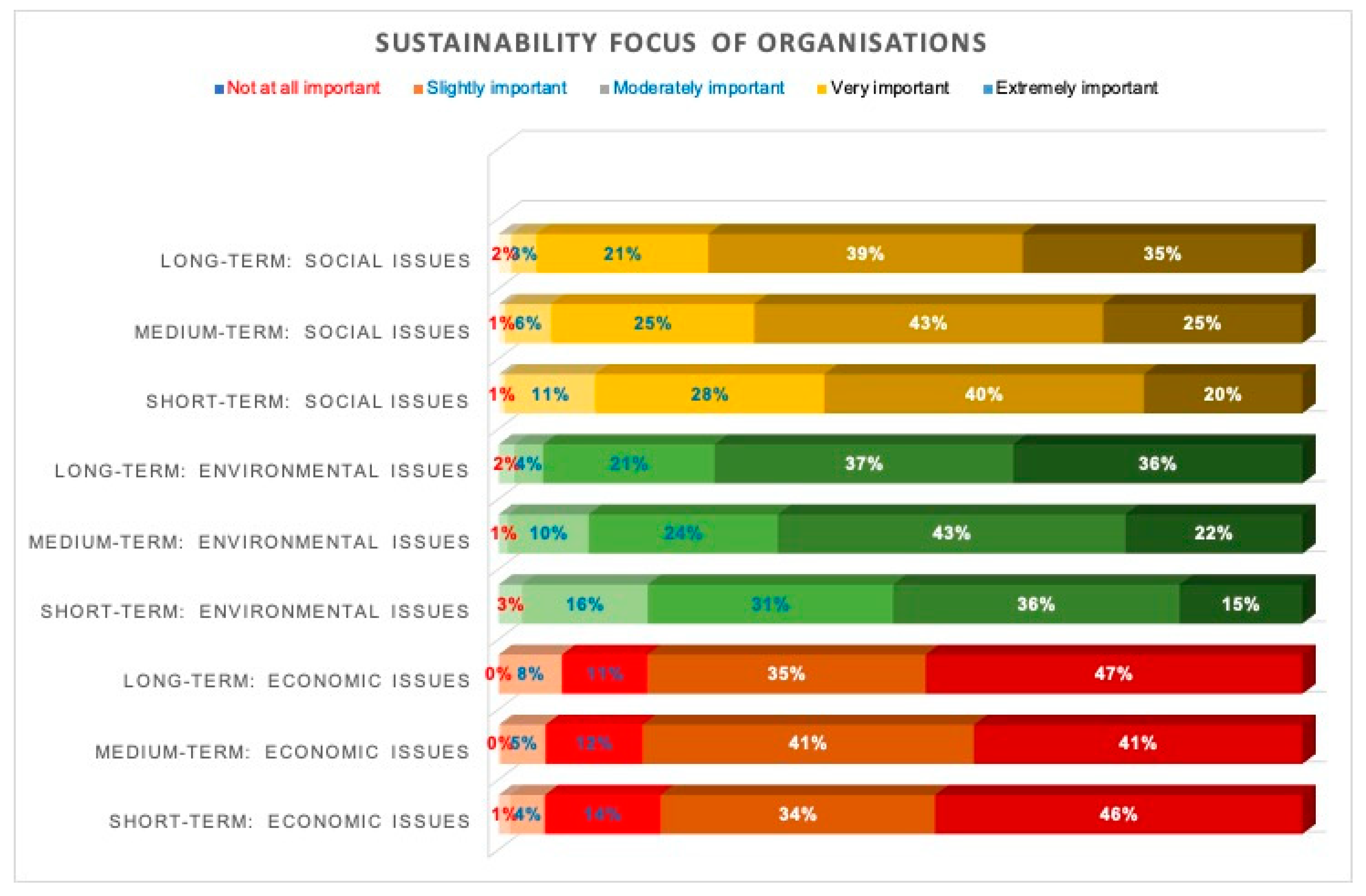 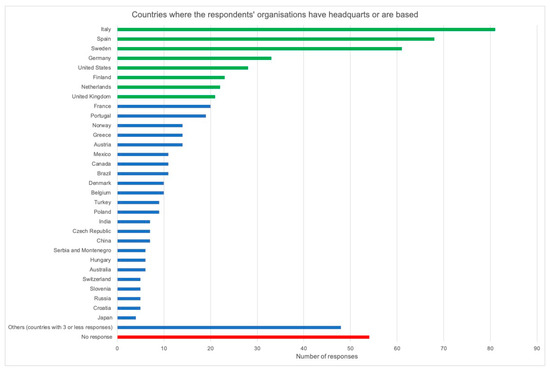