Could MOOC-Takers’ Behavior Discuss the Meaning of Success-Dropout Rate? Players, Auditors, and Spectators in a Geographical Analysis Course about Natural Risks

As demonstrated for extreme events, the resilience concept is used to evaluate the ability of a transportation system to resist and recover from disturbances. Motivated by the high cumulative impact of recurrent perturbations on transportation systems, we have investigated resilience quantification as a performance assessment method for high-probability low-impact (HPLI) disturbances such as traffic congestions. Resilience-based metrics are supplementary to conventional travel-time-based indices in literature. However, resilience is commonly quantified as a scalar variable despite its multi-dimensional nature. Accordingly, by hypothesizing increased information gain in performance assessment, we have investigated a multi-dimensional approach (mD-Resilience) for resilience quantification. Examining roadways’ resilience to recurrent congestions as a contributor to sustainable mobility, we proposed to measure resilience with several attributes that characterize the degradation stage, the recovery stage, and possible recovery paths. These attributes were integrated into a performance index by using Data Envelopment Analysis (DEA) as a non-parametric method. We demonstrated the increased information gain by quantifying the performance of major freeways in Los Angeles, California using Performance Measurement System (PeMS) data. The comparison of mD-Resilience approach with the method based on area under resilience curves showed its potential in distinguishing the severity of congestions. Furthermore, we showed that mD-Resilience also characterizes performance from the lens of delay and bottleneck severities. View Full-Text
Keywords: resilience; transportation systems; congestion; sustainable mobility; PeMS; traffic; mobility; Data Envelopment Analysis resilience; transportation systems; congestion; sustainable mobility; PeMS; traffic; mobility; Data Envelopment Analysis
►▼ Show Figures 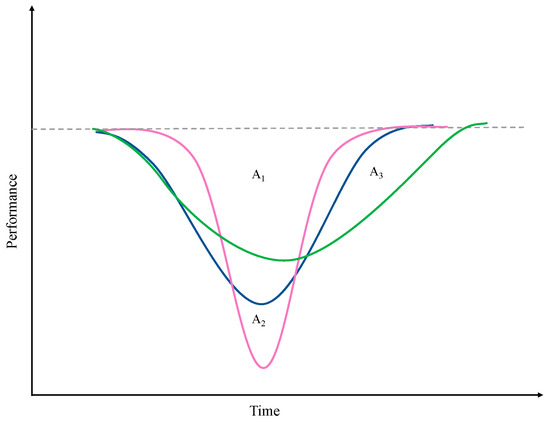