Entrepreneurship as the Unsung Hero during the Current COVID-19 Economic Crisis: Australian Perspectives
Next Article in Special Issue

Recent data on conventional bike and/or electric bike (e-bike) sharing systems reveal that more than 2900 systems are operating in cities worldwide, indicating the increased adoption of this alternative mode of transportation. Addressing the existing gap in the literature regarding the deployment of e-bike sharing systems (e-BSSs) in particular, this paper reviews their spatio-temporal characteristics, and attempts to (a) map the worldwide distribution of e-BSSs, (b) identify temporal trends in terms of annual growth/expansion of e-BSS deployment worldwide and (c) explore the spatial characteristics of the recorded growth, in terms of adoption on a country scale, population coverage and type of system/initial fleet sizes. To that end, it examines the patterns identified from the global to the country level, based on data collected from an online source of BSS information worldwide. A comparative analysis is performed with a focus on Europe, North America and Asia, providing insights on the growth rate of the specific bikesharing market segment. Although the dockless e-BSS has been only within three years of competition with station-based implementations, it shows a rapid integration to the overall technology diffusion trend, while it is more established in Asia and North America in comparison with Europe and launches with larger fleet sizes. View Full-Text
Keywords: e-bikesharing; exploratory data analysis; sustainable transportation; technology diffusion e-bikesharing; exploratory data analysis; sustainable transportation; technology diffusion
►▼ Show Figures 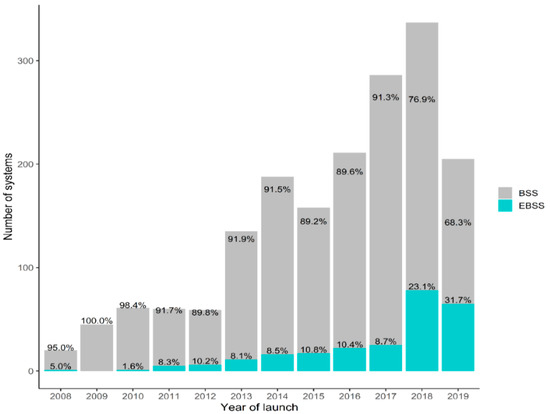