Can Fishing Tourism Contribute to Conservation and Sustainability via Ecotourism? A Case Study of the Fishery for Giant African Threadfin Polydactylus quadrifilis on the Kwanza Estuary, Angola
Previous Article in Journal

Yak is the main source of livelihood for transhumant pastoralists residing 2500 m above sea level in 10 northern districts of Bhutan. In transhumance systems, herders migrate with their yak herds between summer and winter rangelands to maximize forage availability, while their families remain in permanent villages [1]. Yaks are kept mainly for milk and meat purposes, and in some areas yak bulls are used as a draft animal to plough agricultural fields. Besides, the transhumance pastoralism system maintains socio-cultural landscapes, which often have spiritual importance to the wellbeing of the community and is assumed to preserve biodiversity in the mountains [2]. Furthermore, the unique cultural identity of yak-based communities supports tourism, which generates high revenues to Bhutan [3]. However, there are numerous challenges that yak herders face, such as declining labour availability, low forage availability in the rangeland, yak mortality, and limited access to the market to sell yak products [4,5,6]. The numerous challenges to yak farming have continued to increase over the years due to socio-economic developments, changing policies [4,5,7] and climate change [8].
Socio-economic developments have impacted yak-based transhumant pastoralists at family level. While acknowledging that modern education for younger pastoralists is important to develop skills and knowledge to improve living standards, a lack of awareness and incentives for them to stay in their village to take over yak farming means they will migrate from villages to urban areas where they can find better services and facilities [5,9]. In addition, both young and adult family members prefer to be engaged in other activities than yak farming, such as collecting the mushroom cordyceps (Cordyceps sinensis) and medicinal plants, which gives them a relatively high economic return [5,7,9]. In addition, the policy to increase food safety in Bhutan has led to the import of cheap dairy products and to non-yak dairy development. Both are mentioned as threats to the sale of yak products [10].
Policy developments and climate change affect forage availability. For example, regulations that prohibit herders from burning and removing shrubs on rangelands (Forest and Nature Conservation Act of 1995), a method that was effective to control shrubs and maintain forage production on the rangelands in the past [10], were instated. This has become more urgent due to climate change which causes shrub proliferation due to warming and lengthening of the growing season [8]. Other regulations related to nature conservation affect yak farming by an increase of human-wildlife conflicts [7].
Hence there are many reasons to expect yak farming to decline in the near future. Policy makers perceive the decline in yak farming as a socio-political and economic concern to Bhutan. In order to find a solution within the context of these socio-economic developments and regulations to maintain yak farming in Bhutan, interventions to support these communities may be needed. In order to understand where to target the new policies, the perceived level of concern regarding these factors affecting the yak farming practices from yak herders’ and livestock professionals’ perspective need to be known. Since there are regional differences in yak farming, constraints and level of concern on factors might be different. Moreover, demographic factors including age, gender, education, herd size, source of income are used to assess management practices of farmers and decisions in farming [11,12,13]. We hypothesized that the perceived level of concerns of factors that affect yak farming practices is likely to be associated with herders’ demographics and regional differences. We also hypothesized that herders who are more concerned about factors that affect yak farming are more likely to quit yak farming in the future. Therefore, this study builds on the previous efforts of Dorji et al. [7], and assesses the factors that determine the future of yak farming from the perspective of yak herders and livestock professionals.

Bhutan has 10 districts with in total 25 geogs (blocks) where yak farming is operated [14]. Yak-based communities in Bhutan can be classified into three regions based on specific types of yak cheese produced, cattle–yak hybridisation practice, and source of income [6]. Three yak farming blocks matching the different yak farming regions were visited: Merag (eastern region), Saephu (central region), and Laya (western region) as shown in Table 1. In Bhutan, blocks are the local administrative unit. One block consists of several villages. These three blocks were maximal one day walk from the nearest road and they were located over 3000 m above sea level (masl). Hereafter, we will use the name of the regions (east, central, west) instead of the name of the blocks for the sake of convenience. Detailed information required about villages and yak herders to be visited in each block was gathered either from local livestock extensionists or obtained from Livestock Statistic [14].

During the field visit, a verbal consent was obtained from the yak herders taking part in the study. Sixty-seven herders (east, n = 25; central, n = 20; west, n = 22) were interviewed face to face using a semi-structured questionnaire. In the western and central region, the Bhutanese national language was used to interview the herders, which was translated from English by a qualified local translator. In the eastern region the local dialect called sharchopkha was used, which was translated by the interviewer, who is a native speaker of this dialect. The semi-structured questionnaire consisted of two sections (Table 2):

Besides yak herders, 2 yak researchers and 26 local livestock extensionists working with yak-based communities were interviewed face to face (n = 2) or using email (n = 26). The questions included the respondents’ perceived level of concern of factors and opinions on the number of yak farming families in the next 10 years (Table 2). Details about the data collection procedure can be found in non-published material (Dorji et al. unpublished).
The questionnaire for the yak herders was tested with three yak herders of the Tsento yak farming block (which were not included in the analysis), while the questionnaire for livestock professionals was tested with two BSc students of College of Natural Resources who worked with yak-based communities to check for problems in the questionnaire design, such as unclear wording, sensitive questions, and misinterpretation of questions. The revised version of the questionnaire was used to interview yak herders and livestock professionals.

2.3. Characteristics of the Herders

The majority of the herders expressed that the forage availability in rangelands (86.6%), predation on yaks (88.0%), and presence of a successor (72.6%) are concern factors to yak farming. Regional differences were found for availability of high-quality breeding bulls (central, 75%), smaller body size of adult yaks over generations (east, 80.0%; central, 75.0%), prevalence of diseases and parasites (east, 76.0%; west, 68.0%), and access to veterinary services (east, 84.0%). Similarly, livestock professionals perceived forage shortage (83.0%), availability of high-quality breeding bulls (89.3%), predation on yaks (92.9%), labour availability to herd yaks (92.8%), and lack of training to improve yak farming (89.3%) as concern factors to yak farming. The yak herder’s and livestock professionals’ perceived level of concerns of factors related to yak farming is included in Appendix A. Although no difference was observed between the aggregated score of concerns of herders and livestock professionals (z = 1.86, p = 0.06) (Figure 1), the concern level for individual factors to yak farming practices is different.
The herders’ sex, education, age, and the region did not influence their aggregated score of concern (p > 0.05), but size of the herd owned was positively related with the aggregated score of concern (p = 0.04). The herders’ aggregated score of concern to yak farming is likely to increase (odds ratio = 1.07) with a unit increase in current yak herd size (Table 3).

Half of the herders planned to increase the current yak herd size in the next 10 years. The reasons they mentioned were earning more income through sales of yak products (e.g., cheese, meat, sell live animals, hair products) and that it is a reliable source of income while other activities such as cordyceps collection are not (Table 4). Some herders plan to maintain the current herd size because it is able to meet the family daily household requirements, family labour is sufficiently present, and there is no successor to take over yak farming. A few herders responded to decrease the current yak herd size because of experiencing forage and labour shortage (Table 4).
The characteristics of the herders had no effect on their future plans with regard to herd size (Table 5), but the association between region and herders’ plans on the development of their herd size was stronger in the western region than the eastern and central regions (average marginal effect, AME = 0.43). Moreover, the herders’ plans on the development of their herd size in the next 10 years was not associated with the aggregated score of concern (t = −0.28, rpb = −0.04, p = 0.78).

3.3. Herders’ Wish for their Children to Continue Yak Farming

3.5. Association between the Herders’ Plans and Decisions on Yak Farming

To our knowledge, this is the first kind of study unravelling the factors that affect the future for yak farming in Bhutan from the perspective of herders and livestock extensionists. We conclude that not many herders’ characteristics were associated with perceived concerns and the future plans and decisions on yak farming as was hypothesized, but probably there are other factors such as the motivation of a person in farming and risks perceived by a person. Nevertheless, our work underscores that policy makers should consider and incorporate factors that associate with perceived concerns such as forage shortage, predation, and decreasing successor to take up yak farming. This would contribute to the chances for sustaining yak farming in Bhutan. In addition, development policies should aim for financial security by helping yak farmers selling their products for a good price and by looking for novel alternate livelihoods. Besides, they should also provide better local infrastructures, communication services, health services, and upgrading the existing schools to give opportunities for young people to stay in the local communities having a good future perspective.

This project was funded by The Netherlands University Foundation for International Cooperation (NUFFIC). The study is a part of the PhD thesis of the first author (N.D.).

The authors are grateful to the local livestock extensionists for their logistic support to the first author (N.D.). The authors wish to thank all the respondents for their valuable time. We further thank the College of Natural Resources, The Royal University of Bhutan for the support during data collection in Bhutan. 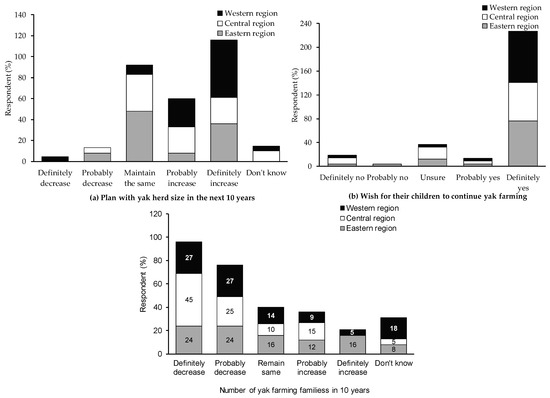 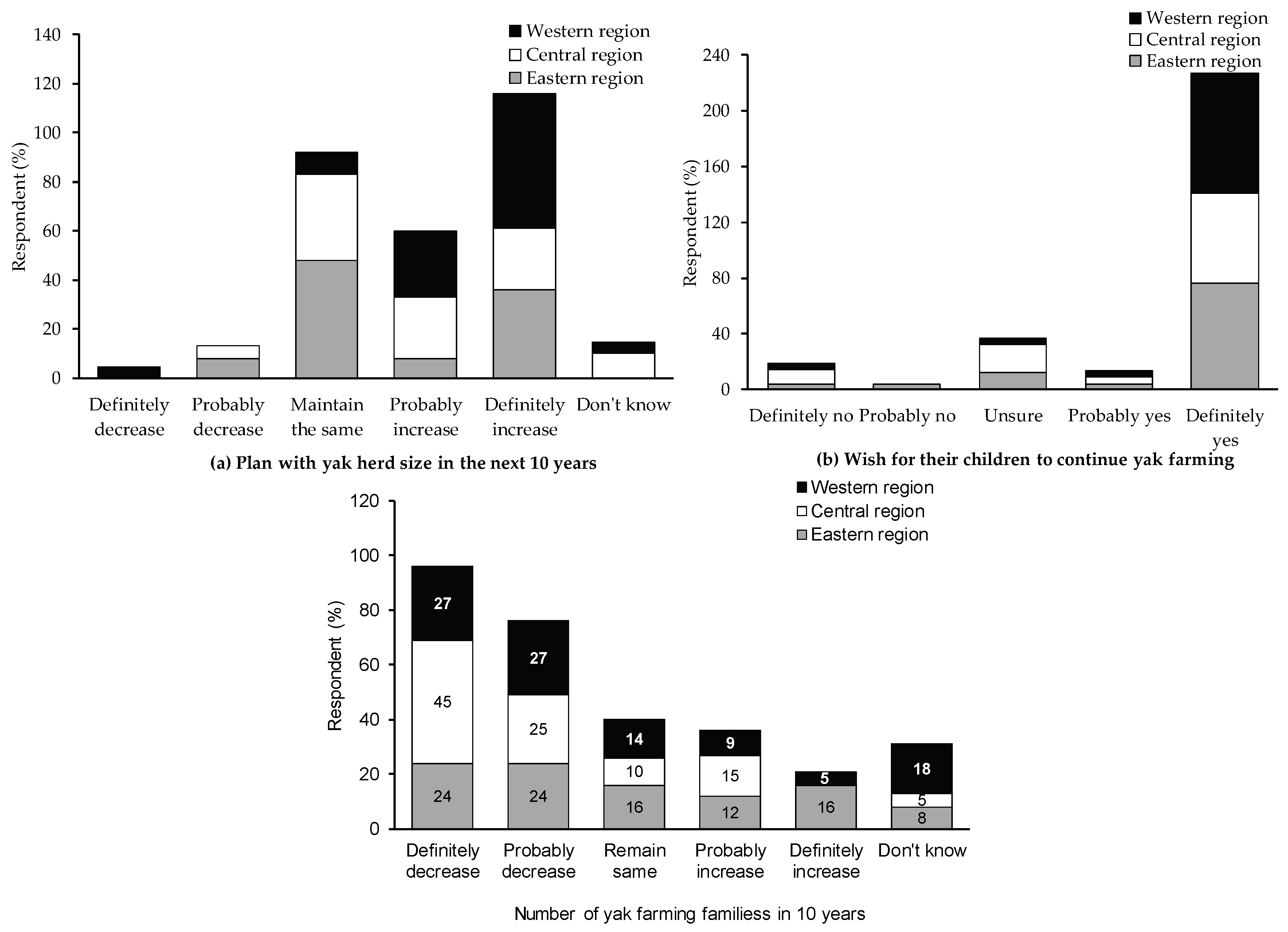 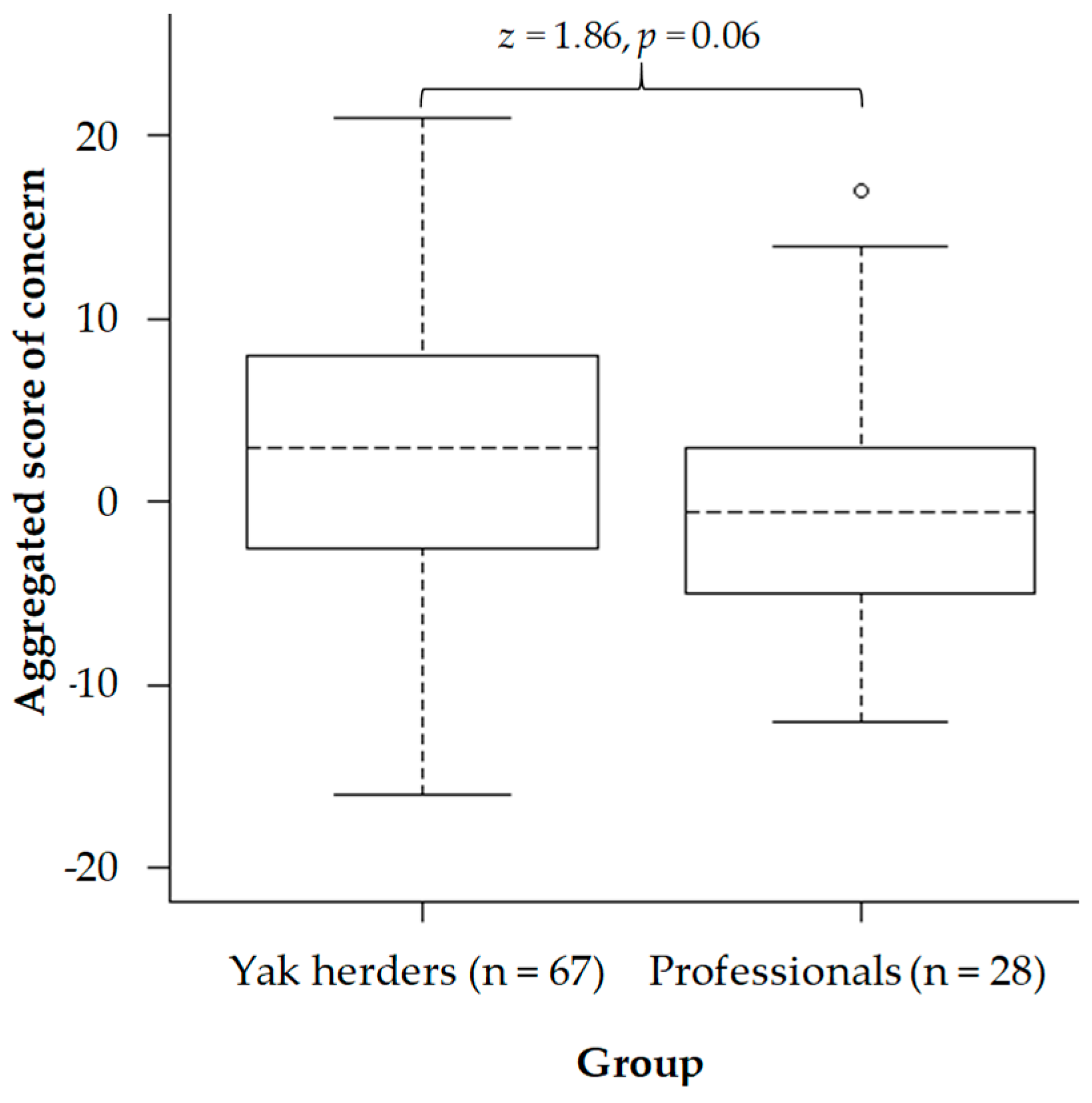