Planning of sustainable urban renewal is one of the key issues for city development. Particular emphasis is placed on the problem of the sustainable urban renewal of areas that are made up of a large number of private cadastral parcels that cause ownership fragmentation. Urban renewal is most often carried out to realize a large project where it is necessary to determine the optimal way of its realization. This paper proposes a methodology for assessing the index of fragmentation for the purpose of sustainable urban renewal planning. The methods used to solve the task are Simple Additive Weighting method (SAW) for ranking alternative solutions (i.e., cadastral parcels, spatial elements and areas of future construction), and the Fuzzy Analytic Hierarchy Process method (FAHP) for defining the criteria weights. In the process of defining the index of fragmentation model as well as the weighting determination, a group of experts was involved. The proposed model was tested on the field of the construction of the University of Split campus, for which implementation was planned in several periods. The obtained results show that the proposed methodology can provide support in analyzing the spatial–functional capacities of the existing land, and for decision making in optimizing the realization of urban projects.
Keywords: urban fragmentation; sustainable urban renewal; large public project; SAW; Fuzzy AHP urban fragmentation; sustainable urban renewal; large public project; SAW; Fuzzy AHP

Step 1—Calculation of Triangular Fuzzy Numbers (TFNs)
The experts included in the definition of the index of fragmentation model determined TFNs using AHP method (Table 4). The reason for choosing a Fuzzy AHP (FAHP) instead of the standard AHP method is to reduce the subjectivity and insecurity of the weight definition process. Instead of the crisp weight values, the triangular range of values is defined for each criteria weight. Table 6 defines the linguistic scale of importance and fuzzy triangular scale with lower (l), middle (m) and upper (u) values.
Step 2—Calculation of
Experts carried out a pair-wise comparison of the criteria in order to define their relative relation. The results of a pair-wise comparison are classified into the corresponding A matrix which consists of triangular fuzzy scale for every criteria relative relation. Compromise fuzzy weights for all experts are defined as a geometric mean of lower, middle and upper triangular values of criteria weight: where n is a number of criteria, and k is a number of experts.
Step 3—Calculation ofand
After the calculation of the compromise weights, the sum of lower, middle and upper geometric mean values of each criterion are obtained as follows:
By dividing Equation (3) with (7), normalization of criteria weights is determined as is given below:
Step 4—Calculation of
Any fuzzy set can be described by specifying its α-cuts. For each criterion, the factors corresponding to ten different α-cut values are defined based on which the lower and upper α values are calculated: where l is a number of α-cuts.
Step 5—Calculation of
The final lower and upper α values for each criterion are obtained with the following formula:
Step 6—Calculation of
Defuzzified weight values are obtained by combining the lower and upper α values using the optimism index (λ):
Step 7—Calculation of
Defuzzified weight values are normalized as follows:

3.1. Preliminary Analysis of the Study Area

The validation of the index of fragmentation model was carried out in the area of the campus project, University of Split in the city of Split, Republic of Croatia (Figure 3).
The basis for spatial analysis was the overlap of the existing land subdivision defined by the official data of the cadaster and urban plan of the campus project. These documents defined the facilities within the campus (most relevant for this study were spatial units that related to faculty buildings and other objects in function of the University, the road infrastructure and the green area) and the boundaries and conditions of their future construction. The urban plan represented a new land subdivision of the project area in such a way that new cadastral parcels represented construction parcels in accordance with spatial planning documentation and rules that apply to the area of project realization. The research included subprojects relating to spatial units, road infrastructure and green areas whose realization had not been implemented nor has the way of implementing them been planned. Accordingly, property ownership, along with the financial segment, was the fundamental limiting factor for planning the realization of subprojects within the campus area, which was primarily related to private owners who are residents in the defined area. The distribution of private cadastral parcels, their relation to the entities to which they belong as well as land allocation affiliation defined by the urban plan were key spatial elements that affected the progress of project realization. Figure 4 shows the research area bordered by the urban plan boundary, with a special emphasis on cadastral parcel ownership. The numbers within the figure indicate spatial units as areas of existing and future facilities in the project area of the campus.
By preliminary spatial analysis and discussion with the experts involved in the research, the key spatial elements in the project area were defined. Apart from defining the steps of the index of fragmentation model, the same experts were involved in the process of defining the weights of criteria for the index of fragmentation assessment.
The definition of spatial elements was of great importance for selecting the most optimal method for the index of fragmentation determination. The research began with the identification of all cadastral parcels (or its parts) belonging to the area of research and then their spatial affiliation to a particular spatial element. Subsequently, the elements of road infrastructure and green areas were divided into a number of logical units according to the connection in the sense of simultaneous construction (Table 5). In accordance with these divisions, the identification tag of each logical unit was specified. The identification tag defined a spatial element that contained a certain number of cadastral parcels and its parts.

This paper proposes a unique methodology for assessing the index of fragmentation for use in sustainable urban renewal planning. For the first time, a multifactor urban index of fragmentation was presented with its detailed definition for all project planning levels. The application of a Simple Additive Weighting method (SAW) as well as the choice of Fuzzy AHP methods to determine the relative importance of the weight of criteria has been shown by a highly practical combination for assessment of the index of fragmentation. The SAW makes it easy and quick to calculate, while Fuzzy AHP allows the inclusion of experts in the weight definition process that is considered the most sensitive part of this methodology.
The difference between the proposed index of fragmentation and those found in scientific and professional literature is that the existing fragmentation indexes of urban areas are usually based on only land use analysis by studying the spatial heterogeneity that is most often a result of unplanned construction and insufficient concerns about the sustainable development of the urban environment. They most commonly are of a single-factor character, and a cumulative characterization of multiple criteria with their varying importance in the literature has not been found in the literature. The methodology proposed in this paper provides an improvement over the existing definition of the index of fragmentation, defining its multifactor form. The proposed index of fragmentation is defined in relation to the analysis of the existing land condition, with the aim of optimizing the construction of a large public project. The ideal spatial elements have been defined, and the index of fragmentation assessment is given in relation to the deviation of the existing elements from their ideal form. In the model design, as well as defining the relation between the criteria based on which the index of fragmentation is assessed, a group of experts is included. The experts that have been included in the planning process are eminent specialists from the field of research who have contributed to solving the new problems based on their specific experience in solving tasks related to the sustainable spatial planning. Given that there was a difference between expert assessments but also in order to reduce the uncertainty of defining the weights, a Fuzzy AHP method was used which provided the final weights of criteria based on the evaluation of the five experts involved in the decision-making process.
By selecting the criteria for defining the index of fragmentation of private land parcels, a wider spatial image was obtained that on the one hand depicted the relationship of a particular cadastral parcels or its part to the whole or the spatial element to which it belonged, while on the other side it showed the internal fragmentation of a particular cadastral parcel or its part. It is especially important to clarify this sort of criteria. It is clear that a broader image in determining the index of fragmentation yielded more land parcel attributes, but the defined index of fragmentation would not necessarily better represent the problem of each project that has a spatial element. Thus, criteria such as shape of cadastral parcel need to be taken into account when evaluating existing parcels, but to define what is needed for the realization of a particular project, it is very important to select those criteria that directly or indirectly have an impact on the dynamics of realization, from those whose influence in that segment is negligible.
As already mentioned above, the index of fragmentation is one of the identified spatial–functional criteria to be taken into account when planning the realization of a large public project. Further research is concerned with the integration of the index of fragmentation into the context of the hierarchy goal tree with which the main goal, the sub-goals and the criteria for comparing alternative solutions are defined. It is necessary to identify the project implementation phases and to elaborate in detail the flow chart of their implementation. Likewise, the cadastral parcels need to be evaluated except for the purpose of assessing the index of fragmentation and in order to assess their existing status for the purposes of the private landowners’ allocation by calculating their bonitet values. By implementing a complete urban renewal of a given area, the existing land status is evaluated with a view to the fair allocation of private owners to newly created real estates. In further research, a model of allocation will be developed, which will be balanced between the preference of private owners, the real estate valuation as well as the valuation of the property’s bonitet value for the purpose of implementing a fair allocation and gaining public confidence in the fairness of the urban renewal procedure.
The most important contribution of the proposed model is providing support to the decision makers when optimizing the process of a large public project implementation that is realized in more than one period of time. It is particularly important to emphasize that the proposed methodology is adaptable and allows the modification of the goal tree as well as the relative importance (weights) of criteria when defining a unique urban index of fragmentation to solve a new problematic task related to the urban area.

This research is partially supported through project KK.01.1.1.02.0027, a project co-financed by the Croatian Government and the European Union through the European Regional Development Fund–the Competitiveness and Cohesion Operational Programme. 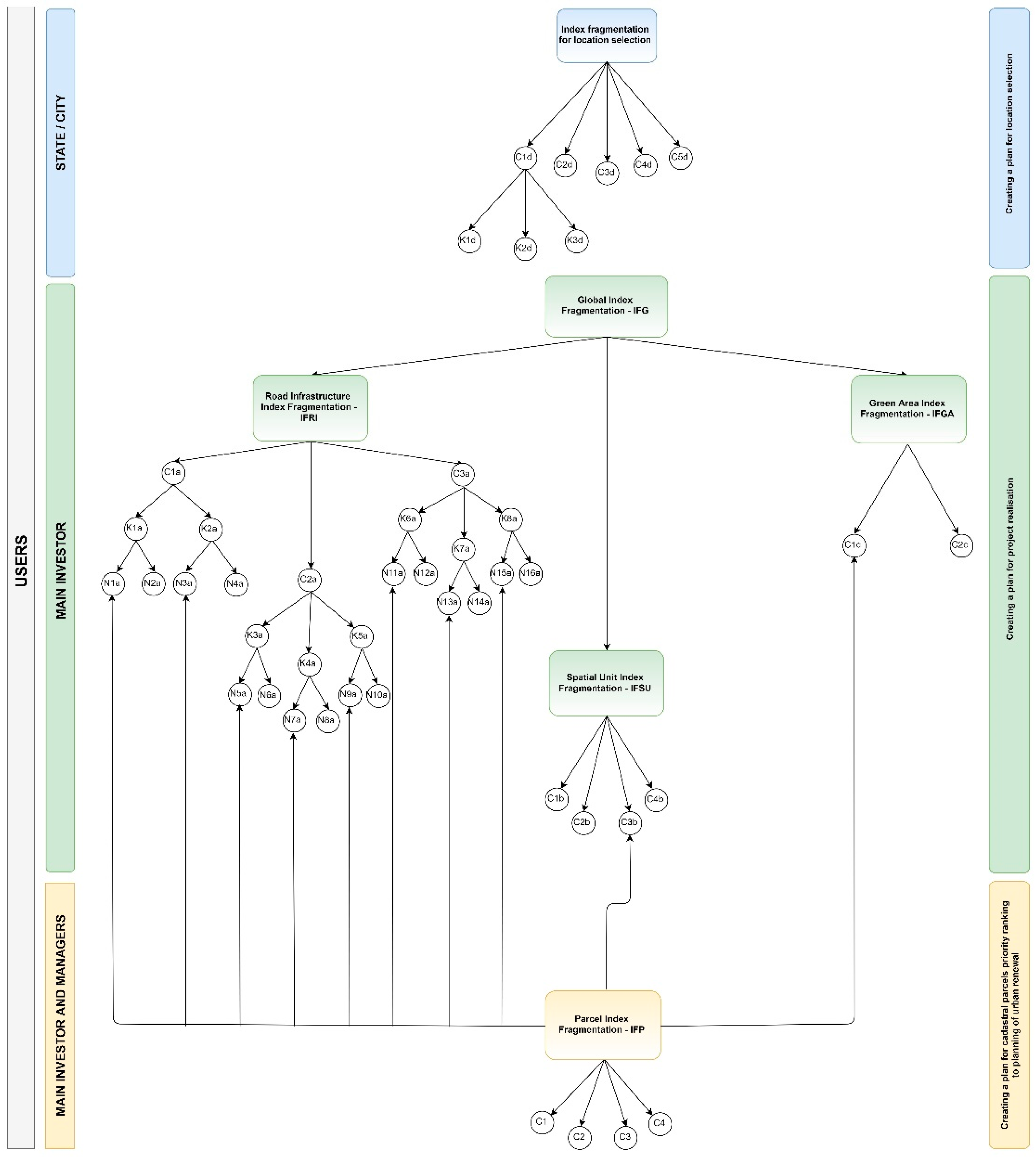 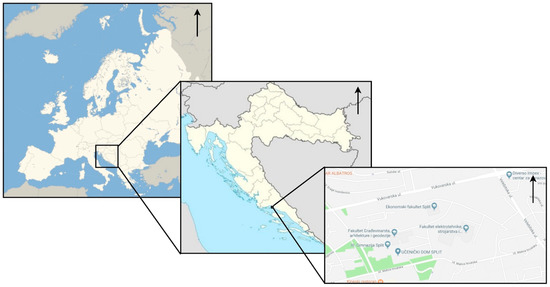 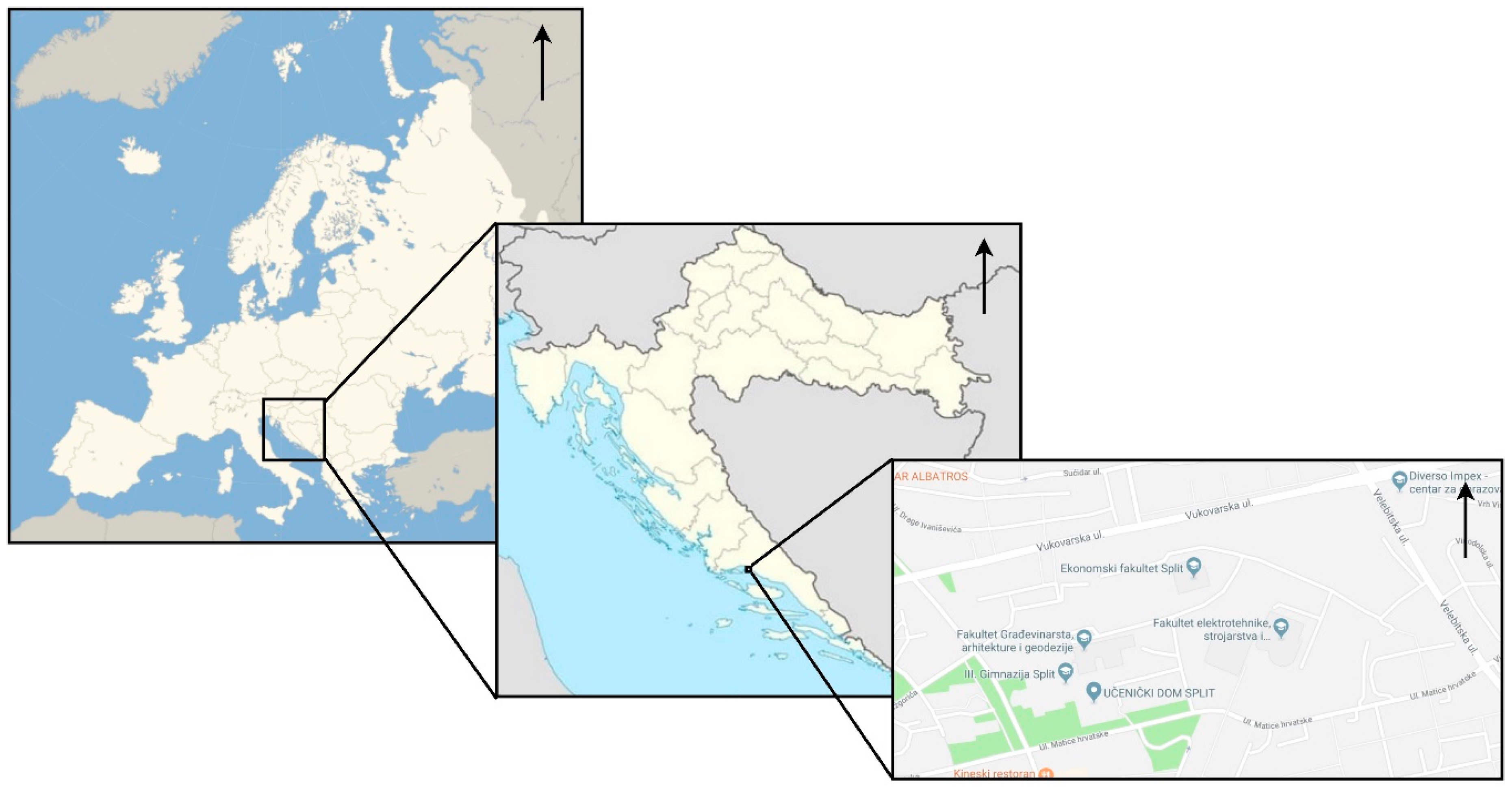 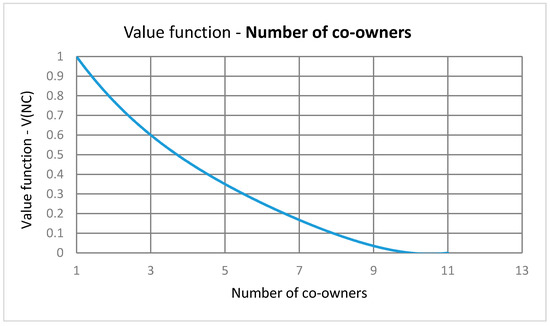 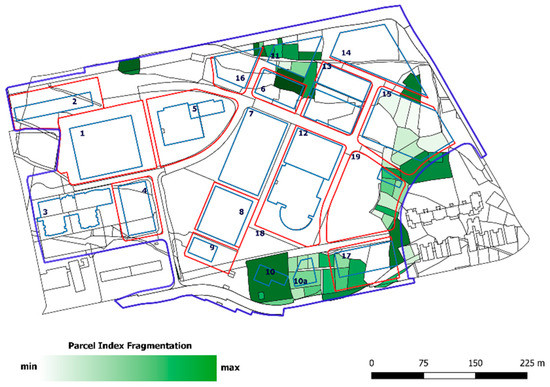